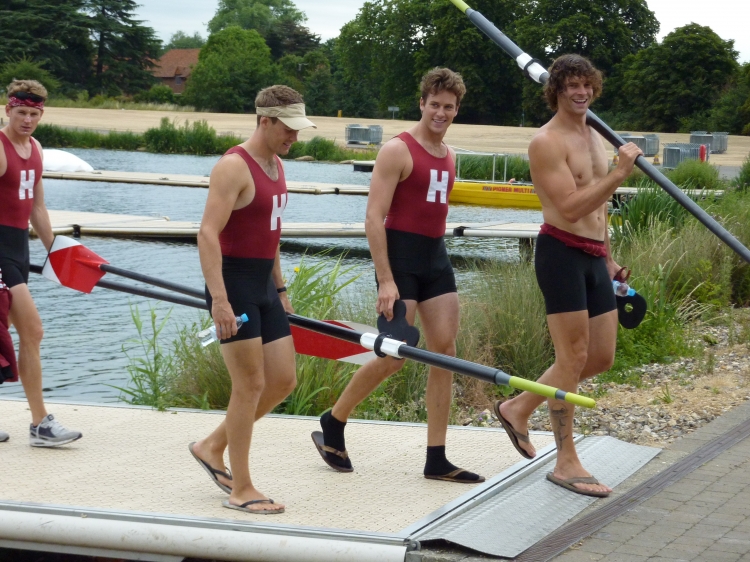 Josh Pence, furthest left; dots demarcate his digital face lift; Armie Hammer, second from right
While I was sorting out the final issues of boats, oars, and oarsmen in Boston, David Fincher and Bob Wagner were back in LA, trying to find a pair of actors who could play the Winklevoss twins. There were no stars who fit the bill for the simple reason that there are few actors in Hollywood who have a heavyweight oarsman's size and stature.

The real Winklevoss twins were in the UK, attending Oxford, so the directors had to settle for the next best thing—two unknowns who looked very similar to each other. There names were Armie Hammer and Josh Pence. Both were 6’5-6’6 and in great physical condition. I saw their audition tape and they looked a pair of golden boys.

Josh had rowed before, at Dartmouth; Armie had never taken a stroke. Still, with a last name like Hammer you had to figure that he was destined to pull an oar at some point in his life. It would only be a matter of time and (ahem) refinement.

The other thing Amie had going for him was that he came from an excellent gene pool. He was the great grandson of none other than Armand Hammer, the mighty oil magnate whose name graces every box of baking soda you’ve ever bought (unless you go in for generic goods).

Fincher immediately took my advice to heart and hired coach Dawn Reagan at Loyola Marymount Crew to start working with guys in Marina Del Rey, first in a double scull and then in a pair. Based on the clips I’d seen and what Dawn told me, they were coming along quite nicely.

But they had no idea of the challenge that awaited them in Boston.

To be honest, no one did. No one predicted that snow would fall during the Head of the Charles Regatta that year, either. And by the time all the equipment trucks staring arriving at Community Rowing to set up the shoot, the weather hadn’t improved much.

The first task was to have Armie and Josh meet the other oarsmen and get comfortable rowing with them. I had chosen the following line-ups:

The tentative pairs grouping were as follows: