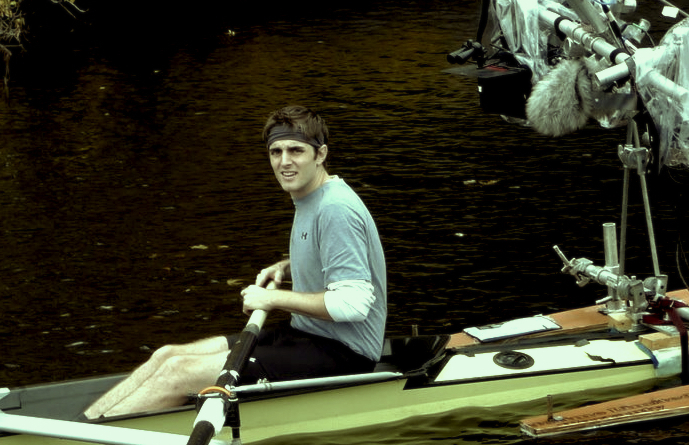 Henry Roosevelt during filming; photo: Will White
If you have never read a Hollywood script before, it is an exercise worth doing at least once. Straight off you will be amazed at how little there is to hang a story on outside of the dialogue. This places a heavy burden on the director, the actors, and the screenwriter.

I’d certainly heard about Aaron Sorkin, the famous screenwriter, but I’d never watched an episode of “The West Wing,” the TV series that helped launch his career. In addition to the task of rounding up a slew of talented oarsmen, I was also told to look over the script and see if there was anything that stuck out or looked awkward.

While I liked the non-linear flow of Sorkin’s script, which moved back and forth between court room deposition scenes and the narrative leading up to it, I was somewhat put off by the overly clever dialogue - particularly the lines he put into the mouths of Cameron and Tyler Winklevoss.

The Winklevoss Twins (or “Winklevi”) are the identical twins that rowed heavyweight crew at Harvard back in 2004. They are characters in their own right, but perhaps not as fleet of tongue as Aaron Sorkin made them out to be in the film.

No one is, I suppose; but Sorkin clearly didn’t know much about rowing.

One scene had the twins handily beating a pack of other Harvard pairs while they derided their teammates in a long-winded, snarky way. Tyler suggested that they row in a circle to give the other boats a chance, while Cameron suggested jumping out of the boat and swimming.

All of this witty repartee, of course, was delivered while they were rowing at full pressure.

I politely tried to explain to David Fincher & Co. that oarsmen generally didn’t speak in long, cleverly wrought sentences like this - not for lack of intellect but lack of breath.

Also, in an earlier part of the same scene the script had one of the other Harvard oarsmen turning around and delivering the line: “Those guys are freakin’ fast. I guess we’re not going to catch them today!”

This last snippet of dialogue was used as the try-out line during the Boston casting call for rowing extras, which was held at the Community Rowing Boathouse courtesy of director Bruce Smith. Ironically, Bruce and I had first met many years earlier when he was working on a film based loosely on “The Amateurs.”

About thirty guys showed up for twenty spots (two eights worth, plus a pair). One guy among the twenty would be the lucky one to deliver the dubious line of Aaron Sorkin’s dialogue. What it meant was a minuscule shot at fame and a substantial pay increase.

Where did most of the oarsmen come from?

There were several Harvard graduates, including ex-national team member Adam Holland, three or four Northeastern grads, and one from BU. From out of town there was an ex-stroke from Trinity by the name of Perrin Hamilton, and another from George Washington named Henry Roosevelt. There were also a smattering of club rowers from Union and Riverside.

Everyone wanted to be famous, but first they had to fill out some forms, have their picture taken, and perform for the casting director in a little room upstairs.

After the try out, nearly all the guys who emerged from the casting room concluded that the line of dialogue was super-corny and had to go.

Even oarsmen have their standards.

In case you are wondering, the average “extra” receives about $125 day on a Hollywood set, which isn’t much considering what you have to do. But I knew that the oarsmen were specialists and should get more pay, particularly when they were going to be out on the Charles in late October, sitting and waiting to perform take after take.

I explained to the guys that the romance of film was illusory and the actual work was pure tedium. They would be on call 24/7, and plans and practices would change randomly.

Then there were the rowing tryouts. While I knew at least half of the guys, the rest were total strangers with untested skills.

A few guys were out of shape, a few others were not strong or skillful enough, but overall there was some real talent. It is always exciting to watch a group of experienced oarsmen take to the water for the first time. It was like throwing jazz musicians together and seeing what kind of music would result.

I felt a little badly for Henry Roosevelt, who I’d placed in a pair with Adam Holland. During the casting call, I’d teased Henry about his lack of upper body bulk and pointed to the ultra-fit Holland. Adam played along, flexing his biceps. “You need to start lifting,” Holland chided him.

Henry, who had deep set, soulful eyes, just looked down, a little embarrassed.

But the casting director actually preferred Henry, who had studied acting after college instead of going to the gym. He got the speaking part, which meant he would make three times more than everyone else.