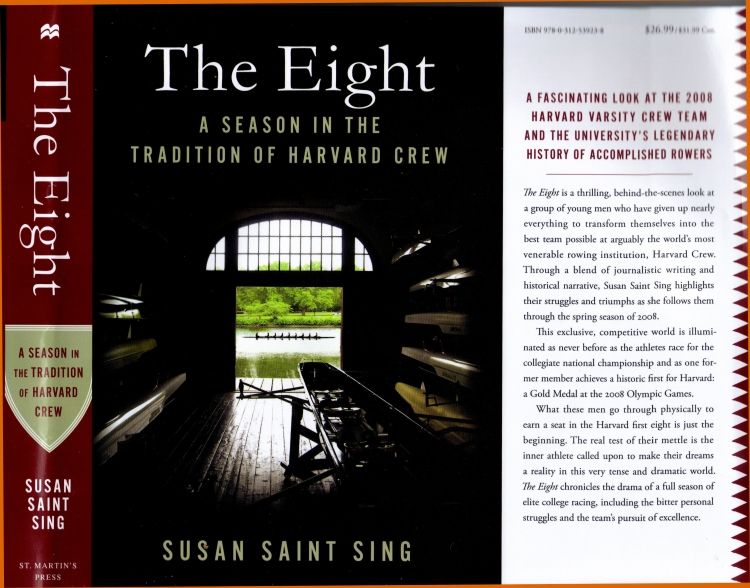 With the veritable explosion of scholastic and collegiate rowing over the past decade and a half or so, one might have expected to see books giving a closer look or an insider's account of one of the new collegiate programs, or even a story from one of the more established teams like U. Washington, Cal or Virginia. So it may be somewhat of a surprise that the latest addition to the growing stack of non-fiction about rowing, Susan Saint Sing's very readable "The Eight." (St. Martin's, $26.99), revisits the oft-chronicled Harvard heavyweight men.

Subtitled "A Season in the Tradition of Harvard Crew," Saint Sing's book skillfully interweaves the narrative of the Harvard heavyweight men's 2008 season, the quests of former Harvard rowers Malcolm Howard, Pat Todd and Cameron and Tyler Winklevoss to achieve selection for the 2008 Olympic Games in Beijing, and an expansive history of collegiate rowing in the United States as seen from the vantage point of the establishment and growth of Harvard's program from the middle of the 19th century onwards.

Saint Sing, a skilled sailor and herself a member of the '93 US National Rowing team as the Head Manager of the women's senior team that year, has done a fine job pulling all three narratives together. It is in the historical perspective that "The Eight" truly shines; her illustration of the path that collegiate athletics took in the US around the turn of the 20th century and the relationships between character, academics and athletics that the leading minds in collegiate administration of the time sought to make, and how these relationships culminated specifically in the founding and growth of Harvard's crew is illuminating, and Saint Sing's ability to tease out and relate the narratives from over 100 years ago to the present is masterful.

Indeed, across the book as a whole, Saint Sing's prose is by turns sober and lyrical. Especially in her framing of the interviews and commentaries by coach Harry Parker and the Harvard athletes and coaches, "The Eight" allows the voices of her subjects to flow gracefully through the narrative.

As observers may recall, the 2008 season was as tough a campaign for the Harvard heavies as they've endured; between a lackluster regular season and missing the Grand Final in the V8 at the Eastern Sprints for the first time in 44 years, the Crimsons' season was atypical at best. Perhaps that humanizes the narrative somewhat, and Saint Sing sets the context for these setbacks well; even Harvard doesn't win all the time.

"The Eight" also shines in its in-depth treatment of the Harvard-Yale race, fittingly for that regatta's status as the oldest intercollegiate athletic contest in the US. Saint Sing satisfyingly ventures a bit beyond the usual narratives dealing with the race itself and the cloistered camp settings of the two colleges preparing to race, and finds interesting historical and cultural markers in the surrounding area, New London, Connecticut, that seem to reinforce the notion that, as an athletic contest, there truly is something both historical and vaguely sacred about the event.

The examination of the Harvard of the present day however is perhaps the most tenuous section of the book. "The Eight," even in spite of the rich context that comes from extensive interviews with athletes and coaches, does end up tending towards a treatment of the "mythological" Harvard crew rather than an insider's description of those training innovations and coaching masterstrokes that have made the Harvard heavies as successful as they have been over the past five decades. The book is blurbed by Brad Lewis, who describes it as "a rare...opportunity to peek beneath the kimono of Harvard crew," but, to take that analogy one step further, there's still another layer of clothing that would have to be removed for one to get a truly revealing glimpse of what makes up the "Harvard difference."

Nonetheless, Saint Sing ties up "The Eight" in the neatest way possible, by bringing the historical, collegiate and Olympian perspectives to their logical conclusions with Malcolm Howard, Harvard '05, winning the program's first ever Olympic Gold Medal as a member of the Canadian Eight at the Beijing Games. Her accounts of the various members of the Harvard crew vying for Olympic glory serve nicely to illustrate the larger point she is making about the history and traditions of the program that has shaped the athletes.

Susan Saint Sing's "The Eight" is a well-written and welcome addition to the rowing canon. Purists may well wish to have heard a little more about the intricacies of technique, motivation and black magic that has brought such success to Harvard's crew for so long, but even without these details, the book neatly captures a snapshot of the history and present state of our sport as viewed through the lens of one of the more storied programs in the US.