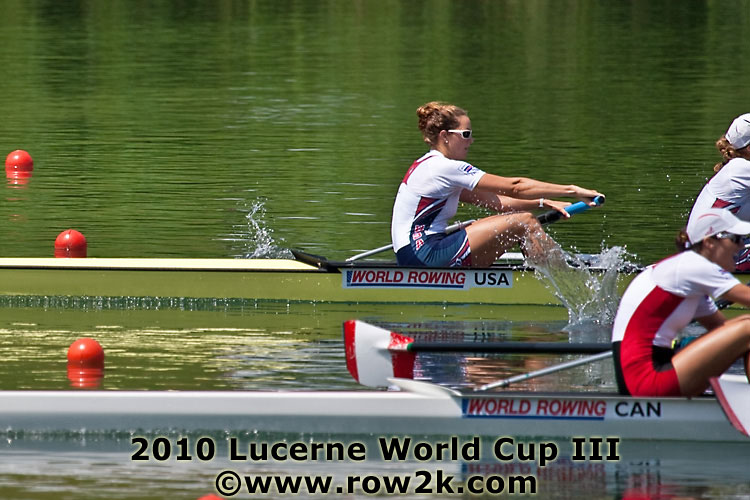 Last few strokes of US win in W8+. Zelenka in bow

Sarah Zelenka is a newcomer to the US women's senior national team, but she's already made a name for herself in 2010. Hailing from club program Grand Valley State, Zelenka won two golds at the Lucerne World Cup: a dominating win in the W4- and a come from behind win in the W8+.

row2k - You began rowing as a novice at Grand Valley State, how did you initially find the sport?
Sarah Zelenka - I had just come off my senior year of high school turning down a basketball scholarship and was ready to try something different. I met a male rower on the team my first week at Grand Valley who had nothing but great things to say about the sport. There were also rowers in every common area out recruiting. I knew I wanted to stay active in college and explore different opportunities, so when I heard about rowing I was excited to try it out.

row2k -What was your prior athletic background? Is there anything that may or may not have indicated your aptitude for rowing?
Sarah Zelenka - I swam for a summer program for thirteen years and three in high school, as well as played basketball and badminton for four years. I believe just having an athletic background in a variety of sports contributed to my success with rowing.

row2k - At what point did you know you were hooked on rowing and what is one of your favorite aspects of the sport?
Sarah Zelenka - I fell in love with the sport during the fall of my freshman year at Grand Valley. I loved the team camaraderie, the training, and the racing aspect. Rowing for Grand Valley was really a lot of fun and really made my college experience. My favorite part about rowing is definitely the racing. There’s nothing like it. I love competition and really putting everything on the line. It’s great to see results after putting in so much time and effort.

row2k - What's been the key to Grand Valley's recent success the past few years?
Sarah Zelenka - When Coach John Bancheri first came to the program my freshman year he brought with him strong goals for the program, high expectations, and a winning attitude. He is a very good technical coach on the water and he really whipped us into shape during the erg season (which in Michigan is from November through March). We also had really driven upperclassmen that really picked up and went with the ideas he brought to the team, creating a higher standard for the novice coming in. Bancheri also did a really good job fundraising, so we were able to get new boats, ergs, oars, and a small erg facility over a span of four years, all of which have contributed to the success of the Grand Valley program.

row2k - At what point did you think you had a shot at the national team?
Sarah Zelenka - During the summer of my sophomore year I went to the freshman national team camp. Coach Bancheri encouraged me to go and see how I stacked up against girls from Division 1 programs. It was a great experience and I realized I needed to become more fit if I wanted to continue progressing in the sport. By the time I was a senior my goal was to make the U23 team that summer. I went to an Identification camp at Princeton in the fall and met Tom Terhaar for the first time where he directed me to try out for the U23 team. After making the team I was invited out to train with the senior team once I finished my last semester at Grand Valley.

row2k - What are some of the similarities and differences between training with the national team and rowing for a club program?
Sarah Zelenka - Surprisingly there are many similarities between training with the national team and rowing with a club program. At Grand Valley we would emphasize building a strong base with steady state rows and only do a few AT workouts a week, similar to what we do at PTC. Obviously, differences between a club program and national team training include a higher training load, more rowing specific tools accessible to the athletes (tanks, row-perfect machines, etc.), and much more time spent in small boats. At Grand Valley our expectations were Dad Vail gold. On the national team our expectations are Olympic gold so obviously there is a difference in the competition level as well.

row2k - At this year's Lucerne World Cup, you won gold in both the women's four and women's eight. What was that experience like, especially that tight eight final?
Sarah Zelenka - Lucerne was a blast. Just being able to compete at such a high level and medal in two events was awesome. The straight four is one of my favorite boats to row because it’s larger and more stable than a pair, but there are only four people so you form a unique bond with your boat mates. Winning gold in that event was really a confidence booster for the eight. The eight race, on the other hand, was almost unbelievable. We had a plan for the race and though we were down almost the whole time we had this indescribable faith and trust in it and each other that powered us to win. I’ve never been in such a tight race before, and pulling out the victory in literally the last five strokes was incredible.

row2k - What do you enjoy doing when you're not training and racing?
Sarah Zelenka - I really enjoy napping, listening to music, and finding fun things to do with friends on our down time. Whether it’s trying a new recipe, berry-picking, going to a movie, or just going for a walk in town, I’m always trying to stay active and enjoy whatever I’m doing. 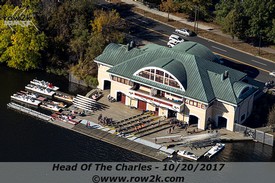