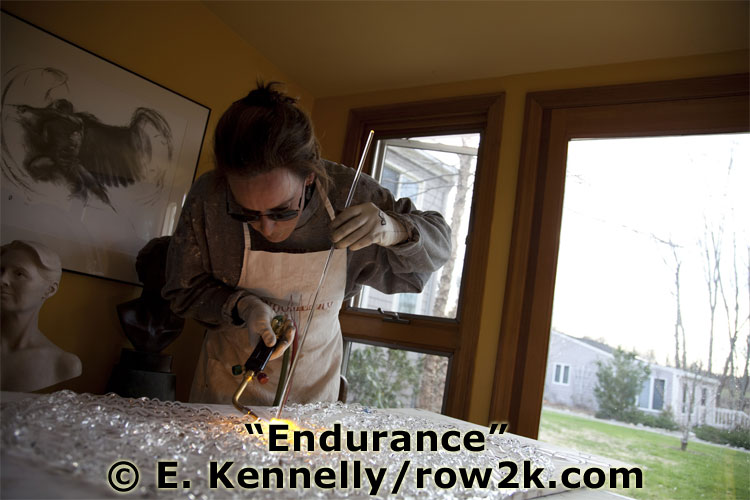 Kennelly at work on the piece

Ellen Kennelly is a ten-time Head of the Charles champion in the Women's Club, Masters and Senior-Masters Single, and an accomplished artist. Following the installation of her breathtaking work "Endurance" at Harvard's Weld Boathouse early this fall, row2k caught up with Kennelly on the process of creating the piece.

Click here for a full gallery of the creation and installation of the work.

row2k: Can you give us an insight into the genesis of your piece "Endurance?"

Ellen Kennelly: I received a call from Karen Weltchek (with the Friends of Harvard and Radcliffe Rowing) in the spring of 2006. She wished to commission a bronze sculpture for permanent installation at Weld Boathouse to commemorate its centennial. When I met with her and Liz O'Leary, though, we agreed that possibilities for a suitable bronze were limited and poor. After further reflection, I proposed a suspended glass sculpture instead, which I felt would be aesthetically more innovative and appropriate to the space. The Friends gave official support to the project, and I am immeasurably grateful for their trust and confidence in me taking on something this ambitious for my first work in glass.

As for the design concept itself, I chose a single's trail for a variety of reasons, and not just personal bias. It's a simple, clear and elegant pattern. Further, I needed to produce art that was non-figurative, and embodied only the beautiful elements of the sport uniting all who have rowed at Weld: the play of light and moving water. The reason is that Weld has always been for many different rowers and of both sexes. It originally served as the boathouse for Harvard freshman and the University's scullers. The freshmen row now at Newell but the scullers remain, joined by the House and graduate school crews and, of course, Radcliffe.

I also felt that colorless delicate glass would harmonize best with the building's strong classic architecture, formal symmetrical design, and traditional materials of muted tones. My commitment was to create art that would be a natural and elegant fit, flowing with, or even accentuating, the architect's achievement of creating a space that appears far larger than it actually measures.

A single's wake also provides the appropriate symbolism and visual embodiment of the commission's focus: a celebration of history's path.

row2k: How did you come up with the title for the work?

Ellen Kennelly: I had long tossed around the concept of "legacy" as the right idea but the wrong word.

It wasn't until most of the way through the final installation of the work that I came up with "endurance" during an on-site water-break discussion with friends John Flory and Chris Stetson. I wanted something simple, clear and - because the commission was for the centennial - emphasizing the idea of the persistence of the past, the continued existence and influence of those who have come before, the widening ripple effect of an on-going journey. Endurance is also what the sport itself is about.

I should add, though, that my personal favorite title is one suggested by Jerry Murphy of Cambridge Boat Club: "A Clam's Eye View of a Shell"

row2k: Describe the process you used to come up with the design for the piece.

Ellen Kennelly: I'm very old-fashioned and analog, and did all the initial design in my head while sitting on a bench at Weld and looking up, imagining variations. I made careful plan and elevation drawings of the space, and drew in pencil on graph paper what I calculated to be the most pleasing proportions. As for the designs of the various elements themselves (oar puddles and stern and bow wakes), I watched boats from bridges, and analyzed still photographs I took or found in magazines to discern their essential lines and behavior.

Once I had a satisfactory paper image balancing reality, aesthetics and feasibility, I made an actual-size test model from garden wire, dowel rods, and a lot of kitchen plastic wrap. My husband, Charlie Hamlin, and I hung this crude form at Weld to determine what heights, spacing, and sizes would in fact work best in reality. That test confirmed that eighteen feet was the right height overhead, and that the overall size was correct but that the design needed to change from four puddles at one-third scale to three at half-scale.

row2k: What can you tell us about the creation and installation of the piece?

Ellen Kennelly: To condense dramatically: I drew each element of the work on paper and cut up the designs as necessary into manageable pieces (determined by what would hold together, and by what would fit in the annealing kiln and the back of my car. The largest 7.5-foot puddles, for example, are in fifteen pieces). I transferred the drawings in graphite on to large sheets of furnacebrick, and then copied the designs in glass. I used four-foot lengths of Corning 7mm borosilicate rod worked with a hand-held propane-oxygen torch. All the pieces were then annealed in a kiln at Strattman Design, so they would be structurally sound. It took six months to complete the glass.

The installation is an essay unto itself. It took over a month, and was a hot, dirty, painstaking and challenging job. I had occasional help as needed, but otherwise worked alone. The entire second floor landing of Weld was fully staged so I could reach the skylight peak of twenty-three feet. Each portion of the piece required setting up a work surface perfectly level and at exactly the same height below the skylight molding. I secured the glass pieces on those surfaces, and then looped 1/32" stainless steel aircraft cable around the glass wherever necessary at proper balance points, crimped it with compression sleeves, and then attached those cables to screws either embedded in the plaster ceiling or the skylight's tin mullions (there are nearly 200 individual attachment points). I then coated the cables with either flat black or else ceiling color to make the suspensions as invisible as possible. I used approximately 1000 feet of glass rod, at least 1500 feet of cable, and around 1600 compression sleeves. With permanence and safety paramount in my mind, all attachment methods and materials were chosen to be very over-engineered, loads distributed as lightly as possible, components impervious to the intense UV of the skylight, and so on.

row2k: You started down the road of doing art almost accidentally; how did you "find" art?

Ellen Kennelly: It looks that way from the resume, but I was actually an artist from early childhood until college. The story is really that I mistakenly left art for a period of my life. Harvard's offerings for studio arts in the early '80s were largely focused on pre-architectural or design careers, which weren't my interest or strength, so I opted to study for a more "sensible" career path of education (though remained an editorial and illustrative cartoonist on the side). Senior year I nearly started all over again at Rhode Island School of Design, but accepted an English teaching job offer because it seemed the more secure path. After several years teaching both high school and college, I started making wedding cakes as an artistic outlet that was also a profitable business. Wanting some kind of formal art training, I enrolled in an adult education sculpture class at the Museum of Fine Arts taught by Ralph Helmick in 1992. His mentoring helped encourage me to transition away from teaching in 1995, from professional baking in 1999, and to try a whole new life as a professional artist.

row2k: You studied divinity in college; does this play into your art, your rowing, or both?

Ellen Kennelly: I was an English concentrator as an undergraduate, and do have a Master of Divinity but that was very specifically to train me for teaching at private secondary schools, i.e., I studied comparative religion, literature, social ethics, moral development, counseling psychology, and so on. No, I don't think of there being any explicit connection. I am an a-creedal agnostic with, if anything, pantheistic leanings (isn't the beauty of nature what draws so many of us to the water?), so if there's any relationship between what I've studied before and what I now do, it's an interest in harmony, beauty and peace. I also want what I do with my life and what I create to be somehow enriching, contributing, or uplifting. And a great deal of my creativity involves creatures or mythical beasts (recent sculptures include medieval chimeras, chinese dragons, and python wall sconces).

row2k: Is rowing a spiritual sport? How can this spirituality be expressed in art?

Ellen Kennelly: I am among the many who would say that it can be, though I don't always think of it that way, nor do I believe any such subjective elements are either inherent or universal. Having said that, though, I experience much of my time on the water as a soul-calming meditative experience (but that's also affected by place; we're very lucky here on the Charles). I do mostly easy steady states, and love being out in nature and around water in the company of friends (rowing partners will confirm that I'm always stopping to watch baby ducks, or a blue heron in flight). One might also view rowing as potentially sharing with spiritual communities such qualities as fellowship, discipline, healing and transcendence. But rowing is like almost anything: it just is, neutral in and of itself, and people project onto it whatever interpretation they will.

row2k: In addition to your art, you are also a very successful sculler; how do art, life and rowing mesh for you?

Ellen Kennelly: I don't think consciously or explicitly in terms of a connection, but - if pressed to articulate one - I'll say that it's my intention to bring to all three an ethic of care, excellence, perseverance, grace and humor. And the three for me are very organic, natural and physical/material, i.e., the art is mostly figurative, I do a lot of work taking care of landscape, I bake bread to give to people, and rowing is so full-body and connected to this earth.

More of Kennelly's work can be seen at her portfolio website.