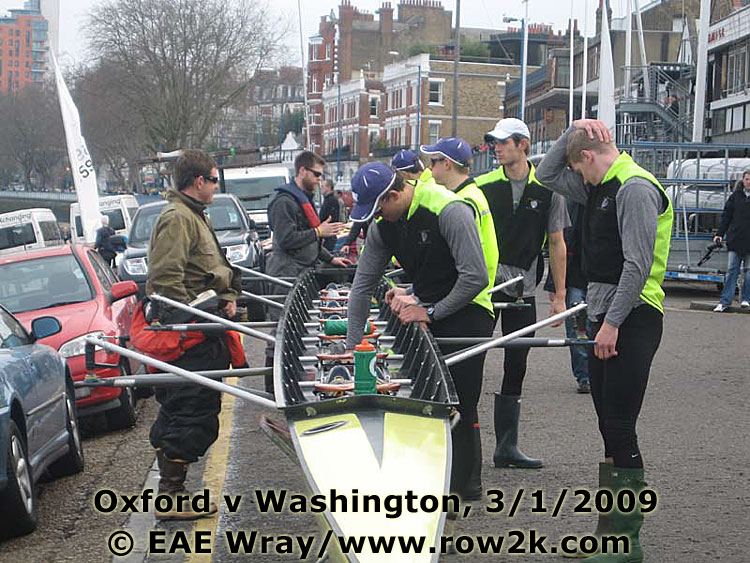 Rigging in the streets of London
Every year, in the run up to the Oxford and Cambridge boat race, the University crews take part in a number of fixtures where they invite local and international opposition to race over the Championship Course. Rather than fighting it out over the whole four and a quarter miles, the crews race twice - first from Putney to just after Hammersmith, and then from Hammersmith to the boat race finish at Chiswick Bridge.

While this format is slightly kinder for opposition more used to racing side by side over 2k than over 6, it's still a tough challenge and with the 2009 boat race less than a month away, the university crews are fast approaching their peak. As well as providing welcome racing practice over the course, these informal fixtures allow the coaches to see how they cope under pressure and fine tune crew line ups between the final crew announcement on the 4th March and the race on the 29th.

Sunday afternoon saw the first of the 2009 races, when Isis (the Oxford second boat) raced a crew from Trinity College Dublin and the Oxford blue boat faced opposition from the University of Washington, the first American university eight ever to take part in the pre-boat race matches.

The Huskies crew was their Varsity eight, and contained several of the oarsmen who won the Grand Challenge Cup at Henley last summer. After leaving Washington and two inches of snow last week, they arrived in London to bright sun, managing to get three outings in on the Thames before the main race. The crew was accompanied by coaches Michael Callahan and Lucas McGee, the 2001/2002 Oxford blue who helped to organize the match. Former Washington oarsman and 2008 Olympian Ante Kusurin was stroking the Oxford crew.

The Thames Tideway can be a difficult beast to tame. The fixtures are raced on an incoming tide to mimic conditions in the boat race, and the movement of tidal water combined with big bends, bridges, navigation buoys and other river craft can be challenging even for crews used to training on the river day in and day out.

As the eights lined up under Putney Bridge for their first race, a group of around seven dinghies from one of local sailing clubs at Putney took to the river for an intra-club match. Sailing boats have right of way over rowing boats on the Thames (wind over power) and as they milled around in front of Putney embankment it started to look like there might be trouble ahead. The referee started the crews, but within 5 strokes had stopped the race as Washington very obviously jumped the start, this turned out to be a rather good turn of events, as by the time the crews had returned to the start, the sailing boats had headed off upstream and out of the way.

The second start was clean and the Huskies put on an impressive show of explosive power. They quickly moved into the lead and had 1/2 length on Oxford as they passed the boathouses at Putney. The dark blues then started to edge back but the Washington cox took a textbook line on the first bend, putting her crew firmly ahead. Approaching Hammersmith her line was slightly too wide, allowing Oxford to line up perfectly on the bridge and take the lead round the Surrey bend. Coming through Hammersmith the dark blues had clear water and finished the piece about three lengths up.

After a ten minute break, the second race settled into a similar format, Washington's powerful start again giving them an early lead of around half a length, which Oxford eventually rowed through to win by a little over a length.