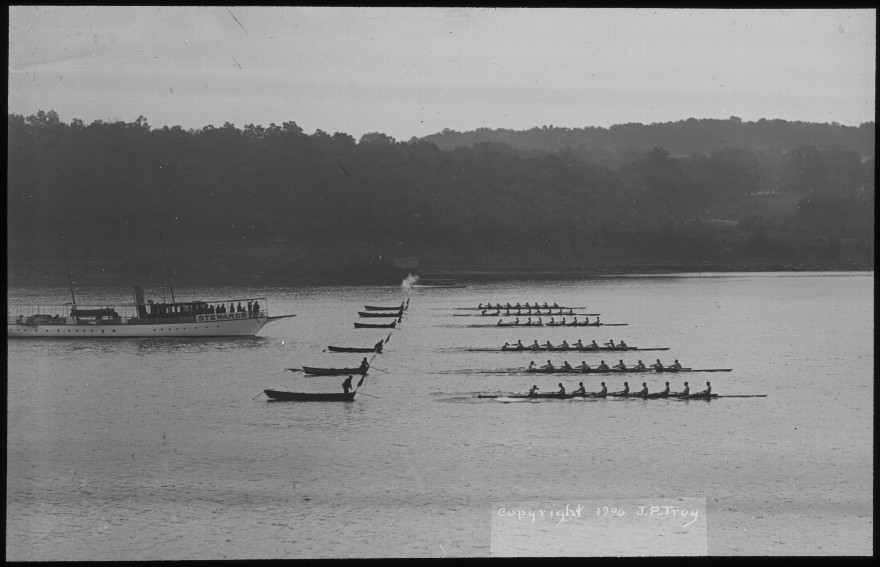 Start of the 1906 Varsity Race at Poughkeepsie. Photo courtesy of Cornell University Archives

Were we living in normal times, this weekend would have been the IRA (Intercollegiate Rowing Association) Regatta. On this week’s Wayback Wednesday we are checking out the history behind this event.

The IRA was actually the direct successor to the Rowing Association of American Colleges, which operated from 1871–1894. The president of the Harvard University Boat Club organized a meeting of rowing college delegates to establish a “union regatta of American colleges”. The convention was attended by Amherst, Bowdoin, Brown, and Harvard (Yale “unofficially” attended). The Rowing Association of American Colleges was formed with a constitution, rules of eligibility and the first collegiate championship (of any college sport) was planned.

The first IRA was founded by Cornell, Columbia, and Penn in 1894. The first annual regatta was hosted on June 24, 1895. Columbia won this first iteration of the regatta, followed by Cornell with Penn finishing in 3rd because their boat sank. With the exception of 1898 and 1920, races were held on the Hudson River in Poughkeepsie, NY until 1950. The regatta, also known as the Poughkeepsie Regatta, was 4 miles in length for the varsity 8’s. Regatta spectators watched by an observation train. By 1899 observation train that slowly followed the race as "a moving grandstand" grossed 48 train cars.

In 1964 and 1968, the IRA changed the distance of the race to 2km to prepare for the Olympic distance. Then in 1969 the Stewards made the 2km distance permanent and adopted the 6-boat heats, repechage, and finals format.

If you have any old school rowing images we should check out and are allowed to share, please send them to us.