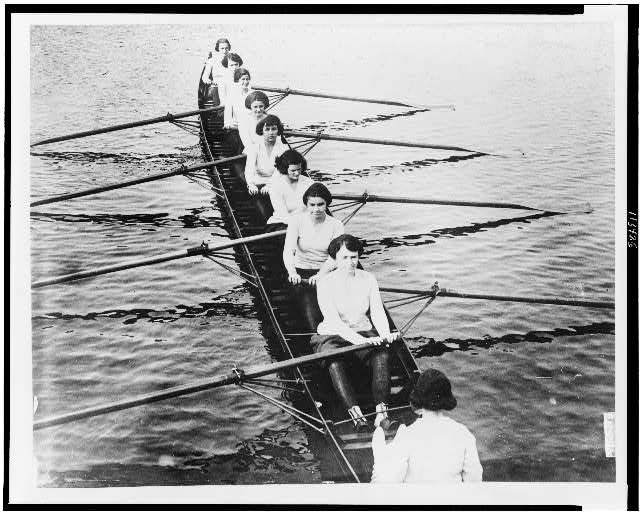 Wellesley's 1922 varsity crew. Photo courtesy of the Library of Congress

On this week’s Wayback Wednesday, we are taking a quick look back at women’s collegiate rowing. While the first NCAA championships wasn’t held until 1997, the first college to establish a women’s crew team was Wellesley College in the late 1800’s.

While we weren’t able to track down any Wellesley photos from the 1800’s, we were able to find a shot of their varsity crew from 1913 and 1922. Wellesley wasn’t the only game in town in the 1920’s. Teams from Cornell to Washington had established women’s boat clubs. In Cornell’s university archives, we were able to locate photos from around 1920. Women rowed at Cornell until 1933 when the program was put on hiatus until 1974. It later became a varsity sport in 1975.

Jumping across the pond, the first women’s Boat Race was held in 1927. The race video can be found here.

There were also a few more Cornell photos that are not in the public domain; see them here:

If you have any old school rowing images we should check out and are allowed to share, please send them to us.

Thanks to Meredith Breiland for the tip on the existence of a Cornell photo in a Chamber of Commerce brochure, which led to a fruitful search for the source and to more photos.