row2k Features
row2k features > Coxing
'...and Shimdi means Shimdi!'
Why racing the Head of the Charles is important for Turkey, and for the U.S.A. 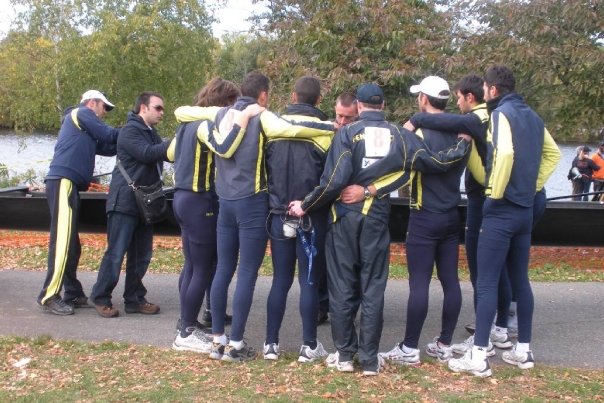 Photo thanks to Rebecca Ivory

For Turkey, which has lately felt the repeated snubs of the European Union, any international exposure is a welcome and important opportunity. It doesn't matter whether it is in soccer, music, or rowing (which is not even a very visible sport in Turkey). What matters is being engaged on the international stage, and feeling as if they are viewed as a fellow nation. At the Head of the Charles, the Turkish crews are hoping to build the reputation of Turkish rowing in the world. There are only about five rowing clubs in Turkey; by putting on a unisuit, you pretty much make the grand finals of Nationals or Istanbul Sprints. A television crew from Istanbul is travelling with us, making a program about our efforts.

The Turks row with the same fire as they play soccer. The whole world saw them pull off the impossible, making it to the semifinals of the UEFA championship, scoring an upset over Croatia, and very nearly upsetting heavily-favored Germany. Turks have one of the most successful blends of energetic optimism and flexible reality that human culture has yet come up with. The glass starts out full. Everything is possible, until reality absolutely proves something otherwise...then go to Plan B. Surprisingly often, they pull the rabbit out of the hat despite the odds. Turks are adept at complex, last-minute arrangements that other cultures wouldn't even attempt, and they go to enormous effort to avoid disappointing anyone.

Which is why I am addicted to racing with them. After my first recruitment as their coxswain, three years ago, I found I couldn't do without that underdog energy and daring of the impossible. I guess I've been Turkish all my life; I just hadn't realized it.

Turkish grammar is based on vowel harmony, making it one of the world's most melodic and beautiful languages. I loved learning and speaking it, and hearing my teammates speak it. It is a non Indo-European language (its closest cousin is Mongolian). There are no easy entry points for an English speaker. For a coxswain, Turkish verbs are a potential deathtrap. Negatives are formed by adding a syllable in the middle and shifting the stress. The possibility of mispronouncing a command and having my crew do the opposite of what I intend could have horrific consequences -- especially at the Head of the Charles. It is crucial to avoid lapsing into English. The Turkish command to row, "çek" sounds exactly like the emergency command in English to stop a boat quickly. Unlike European and North American rowing, which has a fairly fixed canon of commands, Turkish rowing developed outside this tradition. Each boat develops its own calls. "Way enough" does not translate into Turkish at all; it's simply "dür" (stop) or "tamam" (okay). "Open water" means the ocean. The Turkish equivalents of "port" and "starboard" which I had originally learned, are archaic nautical terms that are seldom used. It's "right" and "left," only it's the rowers' right and left, not the boat's. (Imagine getting those terms crossed in the Eliot Turn; we'd end up on Mt. Auburn St. for sure.) Stern four in my present boat actually does refer to the stern four, whereas in my previous boat, asking the "back four" to row referred to the rowers' backs, i.e. the bow four.

There is an all-purpose command "hop" (pronounced 'hope'), which has no meaning, it's just a sound, but which can indicate -- depending on context -- anything from "lift it up," "go," "increase the rating," or to signal the end of a drill or power piece. It's useful having such a multipurpose word; on the other hand you're never exactly sure what will happen when you call it.

Walking around Boston with my teammates in a Turkish rowing uniform is an illuminating experience. (Especially when people assume I don't speak English.) The "exotic" label is one of the few things that can actually get under a Turk's skin. Being Turkish is not exotic if you're a Turk, any more than being American is if you're American. Probably less so. California is exotic no matter where you are from, and I guarantee that what goes on in Greenwich Village every night is far more exotic than most of what happens in law-abiding, well-behaved Istanbul. (Many westerners might even consider it a bit on the quiet side.) People sometimes looked at us as though we'd stepped out of a wax museum ("what were you expecting, scimitars and turbans?") This was mostly a source of hilarity for us, but it did occasionally grate.

This is unfortunate. America needs Turkey. As the one secular Moslem democracy, Turkey is a vital bridge between the west and the east. It is a key to peace in the region, and any lasting solution to the problems of Iraq and Iran will certainly involve Turkey.

Apparently, there are a lot of Turkish shopkeepers in Boston. Everywhere we went, people saw the uniforms and came running up to us, some asking for autographs. Having their team come to the U.S. clearly meant the world to them. Suddenly, there was much more to this than a crew race; other people were emotionally invested in it. We were carrying other people's hopes. I began to sense how even apparently small things can mean a lot to a country, especially a small and relatively poor one striving to modernize and take its place in the world.

Their captain -- my captain -- had put that jacket on me with his own hand; they had chosen me to carry those hopes with them. Perhaps for the first time in my life, something I had always done primarily for my own enjoyment mattered -- truly mattered -- to other people. Representing Turkey abroad may well be the most important thing I ever do in my life.

On our way to Boston from JFK airport, during our supper break at a rest stop on I-95, a Turkish-American motorist saw the uniforms and tentatively asked the coaches if he could take a picture of the crew. When we invited him to have his picture taken with us, he practically melted into tears of joy.

As flattering as this adulation is, the crew take it as a very serious sign of the importance of what they do. In the back seat of one of the vans as we continued north, Erhan, Abdullah, and I talked about the obstacles and limited resources of Turkish primary school education, and about the very real problems the country faces. The responsibility sits hard on their shoulders; they are not basking in it, but carrying.

Serious and all business my Turkish teammates may be (You're back in the Ottoman navy, Kachak), but we also laugh and joke all the way. Erhan is right about the friendship and trust among the crew. Turkish humor is wonderful. Not only are the stories and jokes they tell hilarious, but they have a very quick sense of what is funny in other cultures' humors too. It's very situational, very subtle, with an almost surgical sense of exactly what makes particular situations funny. Similar to British humor in a lot of ways. One day, while walking along the Istiklal Caddesi (Istanbul's equivalent of the Champs Elysees) one day, my teammates and I passed a t-shirt shop. In the window was a shirt showing the Playboy bunny...modestly wearing a headscarf. There was also a shirt showing an elite Ottoman janissary; written across the bottom in the same font as the movie title, "The Empire Strikes Back."

Yigit, one of Turkey's most impressive U-23 rowers, is one of those people who can murmur off proverbs and sharp repartee over his shoulder while curled up half-asleep against the window of the van. Although my Turkish is still not fluent enough to catch all of it, I do catch the "what it is, what it isn't" colloquialism. Abdullah tells a hilarious story -- complete with voices -- involving one of the heavyweight rowers and the minbar of a mosque.

Yigit's name means "Courageous." During the Ottoman period, most Turks did not have family names. After the republic was established, Turks chose surnames pretty much as they pleased: place names, totemic animals, personal qualities, or some as "son of," (which is what the -coglu ending means). My five seat's given name translates as "Resolute" or "Tough" (how perfect is that!) and his last name as "sunny southwest," which suits his personality perfectly. My bowman's name means "Believer." What coxswain wouldn't want to have names like that in the engine room? My own name poses a problem. My teammates are not comfortable calling me Rob, and find various ways to avoid it. "Rob" sounds exactly like "Raab" ("the Lord Almighty") in Turkish. They mostly settle on "dümenci" (coxswain) as a cross between a name and title. Bilgetay calls me "Roy." Whenever I am away from Istanbul too long, they call me "Kaçak" (fugitive or runaway) because they say I should be there with them. It's also a sideways pun on küçük (little), a reference to my size.

Race day, and I have pre-race jitters like I haven't had for many a year. In one sense this is good. If ever I should go into a race without them, it would mean something was wrong and I wasn't caring enough. Some athletes deal with nerves by closing them out and clearing their minds. My method is the opposite, to press the nerves down harder by thinking of all the reasons why what I am about to do is important. I think of how much this matters to the people of Turkey; I think of the honor of the school where I learned to cox, of the coaches who have invested their time in my training, of the many great rowers it has been my privilege to be in a boat with, of my family, of my grandparents who are buried on the hill overlooking the finish line, and of my friends. I build the weight until there is no "me" remaining under it, just a universal connection to the task. When the "I" disappears, it takes the nerves with it.

We begin our warmup down to the starting line. The basin has whitecaps, demanding real seamanship to avoid taking water over the gunwales. We take our place in the starting chute, conscious that we are side by side with the best lightweight eights in the world, and proud to be included in this world-famous race. As we move forward, we begin our build according to the red, yellow, and green flags.

"Besh, dört, üç, iki, BIR, SHIMDI! (NOW!)" I yell, and the boat takes off. Shimdi means Shimdi. Coach Bayulken has given us a tower of a race plan. If -- and this is a big "if" -- we can execute it, it will lead us to a superb race. The numbers are well into insane, but that's why we're here. We didn't come five thousand miles just to do the possible. 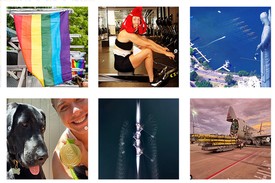