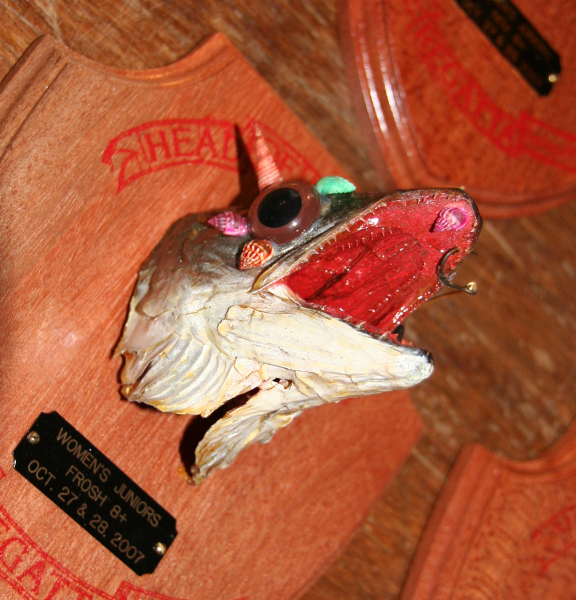 The Head of the Fish, October 27-28 2007 was typically well-subscribed and well-run. Rain hits this regatta annuall - , 9 out of 10 years is the statistic heard on the shore Saturday as it poured - , but racing still went off as scheduled. With so many entries and events, it would be hard to sum up the fun in Saratoga, so here's a worthy side-story to the regatta.

The real story starts with Ezekiel Fish. Ezekiel was a man, not a fish, but nonetheless the regatta that ultimately took his name, the Head of the Fish in Saratoga Springs, New York, has become a place where "did you get a fish head?" is a common question. At this point, folks are definitely not talking about Ezekiel, but rather about the unique trophy that goes to the winner of the regatta.

The Head of the Fish began when a small club trying to purchase a four decided the best way to fund a new shell was with a regatta. The water outside their boathouse provided what may be the most perfect regatta name in history. Fish Creek is named not for the aquatic critters that keep anglers on the water (or ice) most of the year, but for the local farmer named Fish (old Zeke) who resided near the starting line. At least that is how the legend goes.

So, the Head of the Fish was spawned, as it were, in 1986 by Saratoga Springs Rowing Club. SSRC is really a long gray garage with a few small boats in it and about 20 members, currently located unobtrusively between the two more populated boats houses on Fish Creek: Skidmore College/Skidmore Community Rowing's boathouse at Stafford's Bridge Road, and Saratoga Rowing Association's home on 9P, otherwise know to racers as the "start" and the "finish" of the race. Although the first running of the race had only about 65 boats, the 2007 race included about 1400 boats and 112 events. The race is now run by Saratoga Rowing Association with the support of SSRC.

Locals have fostered the Fish theme (how can you not?) with one very unique award: the mounted fish head.

"Our first fish head award was a red snapper from Sperry's Restaurant that we cooked until it was solid then screwed to a plaque," says Tom Frost, a member of Saratoga Springs Rowing Club, architect and fish-award-designer. Apparently one of the founding members of SSRC was an owner of Sperry's Restaurant in downtown Saratoga. While discussing the idea of trophies, someone brought up the fish head idea. The founding member ran down to the kitchen and came up with a decapitated snapper, like a cat proudly bringing in a mouse. The rest, as they say, is history.

Tom Frost, by some twist of fate, became the fish head guy. For the record: he does not fish. Friends donate their slimy and stinky remains to him, which he receives and processes in his garage.

He has learned a lot in the 20 years of volunteering as the fish knacker. Years ago basketball powerhouse and Albany local Siena College had a rowing team, and won an award at the Fish. At one big basketball game in the Athletic Center, fans noticed the foyer had a distinct odor. Turns out the fish head award, which had not been properly cleaned and cooked, was rotting in the trophy case.

"We didn't know then to take out the insides," says Frost.

Frost collects fish heads from the owner of Lee's Campground, which is converted as launch, recovery and team tent area during all big races on Fish Creek, as well as from Moose. Moose is just Moose, he doesn't have a last name of note, but dropped off 100 pounds of Salmon heads to buddy Tom. Moose goes up to Pulaski, NY to fish in the Salmon River when they are running. Anyone who knows how the salmon life cycle goes, knows that salmon are already on their way out when they journey to spawn, and can be downright ugly critters. Moose gets them from the cleaning station by the side of the river (as well as his own catches), and brought them to Tom the week before the regatta. Frost had to start processing them right away. "I used these big fish for big boat awards"

"There were so many, they didn't all fit in my garage freezer—I mean, I had four bags of fish entrails-- so I brought them to work, where they seeped blood into the walls of the freezer." "My hands smell for most of October," he says, even though he wears rubber gloves for the processing. (You wonder that he doesn't have to work – and sleep – with the fishes all month.)

There are many steps to creating the Fish Head masterpieces, but I don't want to reveal his secrets, but know this: he now cleans out the head entirely, and cooks them several times to insure a rot-proof award.

"Some buddies and I sit there and decorate them—it is the best part," says Frost. "Richard McConnell and Rob Bruce do a lot. Eric Tarentino worked on the plaques; even Chris Chase (regatta director) helped this year for awhile."

"They have gotten increasingly silly," says Frost. "One of the guys brought in Mr. Potato Head parts so the fish had arms, ears, etc," he adds, "We also do hair for the female trophies." Observers at the awards tables Friday evening also saw: four small heads, two with curly locks for a mixed quad; an old gnarled fish head with flies and hooks around it for the Veteran's single; and lots of colorful eyes and features—they are works of art. Zanetti Architectural Millwork of Saratoga Springs builds all the plaques in mahogany.

"One of my friends said: 'oh, I think we are going to be in trouble…all the female fish have blonde hair'" shared Frost. He vows to rectify their politically in-correct stereotype next year. "They will all have brown hair."

His wife may not have problems with the blonde locks on the fish, but may have problems with the constant smell of fish cooking in her garage during the fall. "I am getting pressure from my wife to stop doing this…but I don't know who else is going to do it. It has become an expected feature of this regatta."

He asks: "Is there someone stupid enough out there to do this?"