The most awesome rudderless landing story that I know of comes from Baylor School, in Tennessee, where a friend of mine coached and initiated their rowing program. During their second season, a pair of their novice eights were practicing when they were involved in a collision with a tugboat (complete with barges). In the scramble to try to get out of the tugboat's way, and, thrown about by its wake, the two crewshells also subsequently collided with each other. The collisions punched holes in the gunwale of one shell, and tore the entire rudder and part of the stern off of the second, leaving a novice crew and their coxswain in a rudderless, partially-swamped, and perhaps leaking, shell.

To heighten the tension, I should tell you that Baylor's cove is probably the absolutely most difficult docking situation anywhere in the world. It is a narrow inlet off the Chattanooga river, and the shells must pass under a low bridge with a width of exactly 26 ft between abutments (that's right, only 1.5 feet more than the wingspan of an eight). The dock is at an angle immediately behind the bridge in a cove which is barely longer than the length of the shell. The landing sequence is rigidly laid down stroke by stroke (way enough under the bridge, one stroke from bow, then back two from 7, etc.).

So that's the situation they're facing: a rudderless shell, a novice (and now legitimately terrified) coxswain and crew -- and the world's toughest landing. They bring the damaged shells opposite the mouth of the inlet, then send a launch to retrieve their varsity coxswain (who fortunately is also the one who worked out the original docking procedure). They switch coxswains, and Jack gingerly makes the 90 degree turn into the inlet; brings the shell under the bridge, and makes the landing -- on the first try. 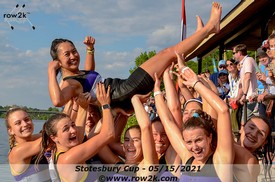