The seriousness with which coxswains take their craft was evidenced by the large turnout at the 2001 Coxswains' convention. Traveling from as far way as California, Pittsburgh, Virginia, and New England, 250 coxswains and coaches met in West Conshohocken, PA to learn about their craft, ask questions, and to raise their levels of effectiveness. The attendees ranged from novice coxswains to those with Junior National Team experience. Former National Team Coxswain Reade Palmer took the attendees through every aspect of coxing, emphasizing safety, responsibility, the coxswain's role in practice and on shore, coaches' expectations, and methods of executing race plans and strategies effectively.

There was a lively discussion on steering sprint and head races, particularly the importance of staying off the rudder during the start of a sprint race. "If your boat can't start and stay straight for the first twenty strokes without you touching the rudder, then you need to practice starts until it can." Studying the course before the race and knowing the wind and current conditions was equated to "free speed" for one's crew. Other forms of free speed coxswains were taught to avail themselves of were: proper stretching by the rowers, staying out of the sun, and proper warmup procedures.

Most of all, the convention was about giving coxswains the knowledge and confidence to make themselves part of their boats and maximum contributors to their programs.

US Junior National Team Coach Bob Rheinhardt outlined the process and the questions a coxswain should ask in contacting college rowing programs, as well as the process of going to Jr. National Team ID camps and submitting resumes and tapes.

Among the popular items for sale at the convention was the QwikRench(c) available from Buffalo Rowing, which is a handy all-in-one tool just 4 inches long for adjusting every possible nut or bolt aboard a shell, from wingnuts to rigger bolts. As a replacement for -- and considerable weight savings over -- the collection of blocks and wrenches a coxswain would otherwise need to carry aboard, it simplifies life considerably. (Where has this tool been all my life!)

Clearly, the convention filled a need, and will advance the level of American coxing. 250 snakewakes in a single room-- even if they're not all talking at once -- might seem like some rowers' nightmare, but rowers will be the main beneficiaries in receiving a higher level of coxing.

And wouldn't you love to know how they got that Resolute into the hotel? 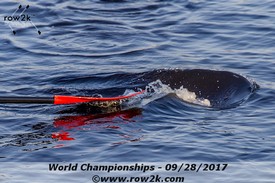