row2k Features
row2k features > Coxing
It's Not the Seat; It's How You Use It - Demystifying Lineups
June 20, 2007
Rob Colburn 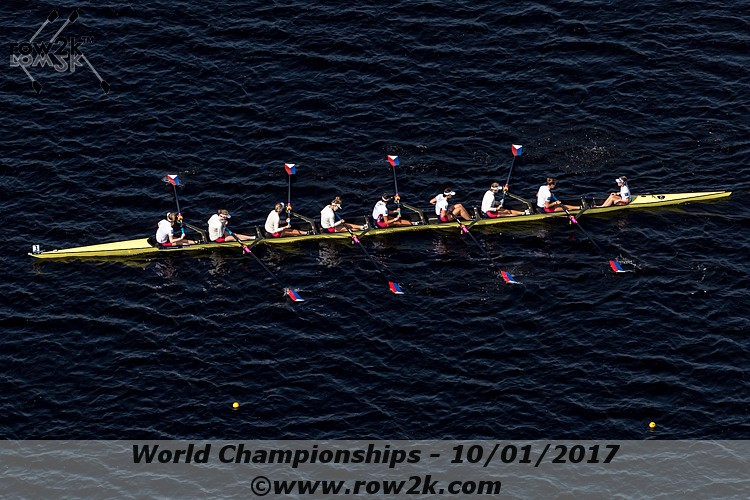 Who goes where, especially in the big boats?
Boat lineup are as much art as science. If you had a nickel for every rower who thought they should have been rowing some other seat, you could build your own boathouse. This column attempts to ward off some of the unhappiness and to explain -- in an all-too-brief nutshell -- some of the considerations which go into making up lineups and the reasons rowers may find themselves in a seat other than the one they were sure they'd earned.

In a simple world, lineups would be determined by weight -- lighter rowers at the ends, heavier in the middle. Natural left-handers would be starboards because the feather hand is the one requiring the most fine motor coordination. If you're light and left-handed, and have a good sense of balance, you're probably my Once and Future bow. If you're light and right-handed and have a good sense of balance, I'm probably going to want you in two. (For more on the bow pair's role in setting the boat, and the reasons for grooming bow rowers by having them row seven seat, see my earlier column "Making the Most of Your Front End." 25 May 2000)

To every theory, there are counter theories; for every statement in this column, there will be examples where someone has done the opposite and made it work. The subtleties are infinite. There are situations when putting bigger people in your stern pair makes sense too. (e.g. to help counter the rush, or to encourage/force the boat to row longer. I also have a theory it might help the quickness on the drive, but I can't prove it.) In which case, other heavier people might need to be moved towards bow to keep the boat from pitching. A rower who might otherwise be rowing five might find themselves in three seat for this reason. If the power in the bow pair is not quite matched, a more powerful rower might need to be moved forward on the weaker side to keep the sides balanced.

The conventional wisdom is to build a boat around Six and Five. A powerful six rower -- even if that rower is as good a stroke technically as whoever is rowing stroke -- might not be a good choice for the stroke seat for the very simple -- but non-intuitive -- reason that the stroke always has to row for eight and be thinking for the rest of the boat. Thus it is often a more effective use of power to put the most powerful rowers in five and six where they can concentrate on just one job.

This is related to the reason why strokes are often put in six or two seat for a practice or two. Rowing stroke can actually be deleterious to your technique. Putting strokes in the middle of the boat to give them a chance to "row for themselves" and to get their technique back is NOT a demotion. I know, I know, you feel crushed, you're wondering what you did wrong, etc., etc. You probably didn't screw up at all. (If you did, you'd probably know it.) It's part of the grooming process, a chance to perfect something, or to work on a habit that has developed from compensating for something going on in the boat (set, slide rush, etc.). Even the best of strokes will sometimes develop habits; it actually shows that they are conscious of what is going on.

Another thing which may determine which seat you row is how well you match up with someone else, and this may even go against the conventional power/weight patterns. It might not even necessarily be the person in front of you. It's like being part of a three-way trade in baseball. Or, you may be have been moved forward or back in the boat because you make a good connection through the engine room with the stern pair, or are versatile enough to maximize any seat whereas someone else might be at their most effective in a particular one. If your coach asks you to switch sides, seize the chance. This is usually a high compliment; not only will you be a more versatile and valuable rower, but you may be maximizing someone else, or balancing the power on a side.

Sometimes lineups can be a total surprise. This is why coaches periodically switch them up, because unexpected strengths can emerge which might not have been obvious on paper. Certain lineups just move a boat better, and all the notetaking goes out the window.

An example: One week, our coach switched the lineups around. By that, I mean put them in a blender and shook them. Rigged the boat for starboard stroke, put in a bucket, switched people from side to side and who knows what else. My first reaction upon arriving for practice and seeing the much-altered boat in slings was, "Alright now, who's been f&#!ing with our boat?" One of my rowers bounced into the boat bay with a grin on his face and announced, "I'm starboard now!" (Er, Rich, how long have you...known? We're your teammates, so naturally we'll support you in this...if it's truly something you feel inside you...)

But it worked. The boat was significantly faster. I hope I live long enough to learn what subtle signs the coach read to allow him to see and make sense of this complicated pattern.

"Nothing specific; just thought I'd try something different to see how it worked," which might not sound like the whole truth, but it was the closest thing to an answer we got.