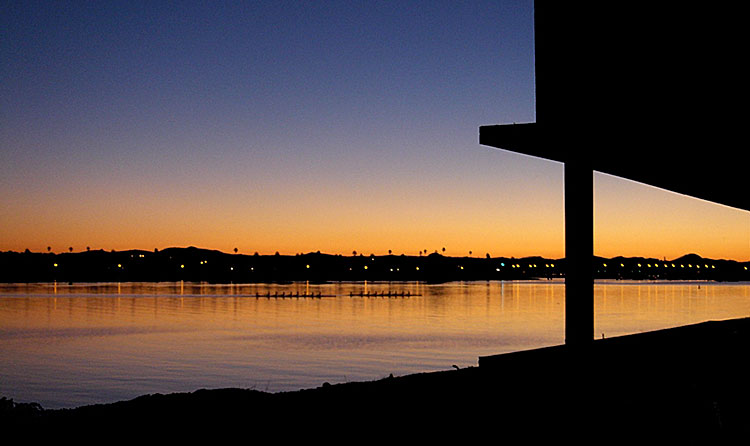 SDRC at sunrise; photo by Randy Hanna
For most rowers, training and racing has been complete since the boats were shelved after the last head race. Despite the mild winter in the Northeast in 2006-07, the rowing community has its favorite seasons, and winter is not one of them.

The hardy souls of rowing grab three seasons on the water; but with normal winters bringing icy docks, de-rigged boats in quiet boathouse bays, and the distinctive whir of ergometers in workout rooms above-they take this one indoors. A few fortunate scholastic and collegiate teams have seen the sun during winter training in the South, but that little tease is just that- a cold winter and spring with icy riggers, layers of high-tech fabrics and frigid boat mates almost certainly lie in wait ahead.

Rowers are a proud, stoic group that suffer the white fingers of near-frostbite with gritted teeth and stony expressions. But it does not have to be this way; there are options if you swap tradition for a surfboard. On the sunny Southern coasts of Florida and California exist clubs where winter means rowing on the water... this is their story.

Orlando Rowing Club: Cheap flights and no pogies
Planning a trip to Disney? Orlando is so much more than the sensory overload of large cartoon characters, Universal Studios Orlando roller coasters, Shamus's Happy Harbor and Nickelodeon slime threats-there is the Orlando Rowing Club on Lake Fairview.

To wit, the club's tenacious Masters Women's 8, that goes by the name emblazoned on the team-purchased boat: CRE8HAVOC. They have a spirit borne of golden skin, quite a few visits to the awards dock and a young, enthusiastic coach. The club of about 75 athletes of varying levels seems to be in the groove: a successful learn-to-row program, sculling clinics, and three eights shoving off in the morning-not a bad start for a relatively new club. The club was founded in 1992, and, as member Jennifer Duquette says: "We take our rowing seriously!"

Keith Young, the master's coach at Orlando Rowing Club, may also be their public relations rep-he is so hyped by their success, they must feed off of it. Check them out and you'll see a lightweight crew that competes against the heavyweight grown-ups and wins (they won Head of the Hooch, won one gold and one silver in two events at Nationals in 2002, and plan to return to Nationals in Oak Ridge in 2007).

The weather allows them to train through the winter, but many said they go back to basics, do drills, and try different seating/personnel combinations. What do they think of the fact that palm trees surround their lake and, more importantly, they can work on a quick catch year-round?

"We take it for granted," says Vicky Hatter, who has been with the club for eight years. "But we do have to wade in." That is a shocking step in the morning, no doubt. "Bow seat complains she is cold." (Isn't it always bow? What about the set?) Hatter adds: "We don't go out if its under 45 degrees."

So knocking tradition starts right there at Orlando Rowing Club, with half of many collegiate team's spring training sessions cancelled due to cold-not. "We like it hot," affirms Hatter.

The weather is ideal, validated by the number of teams that flock to Florida for training off-season. Orlando's Fairview Lake venue may be a tad tight for large programs-it is about 1500 meters across and the team makes 20-minute circles around the perimeter during training sessions. "Ports have to work a little more," quips Hatter. They currently share the water with three high school program and everyone's favorite neighbor: wake boarders and water-skiers.

Rowing is not as common in the Southeast of the country, and they experience some blank expressions at cocktail parties to be sure. "Many folks down here just don't know about rowing," Hatter adds, "We're not supposed to be contenders." ORC may be a perennial underdog in National events, but if their current hold of the southeast is any indication, boats from the club like CRE8HAVOC will be the ones to watch.

In a dispute with Joe's Crab Shack, owned at first by Landry's Inc, then by a division of J.H. Whitney and Co., the club wanted to reclaim their rowing memorabilia that decorated the neighboring restaurant for more than 20 years. There had been a verbal agreement to display the items (including vintage wooden boats, trophies and photos) with the Chart House restaurant, the first owners of the building, which carried over to the corporate entity. Joe's Crab Shack is known for its whimsical displays with a nautical theme, so the memorabilia stayed put when owners changed.

A year of disputes, public hearings, media attention, community outcry and rowing club supporters led the new owners, J.H. Whitney, to return all the items to the club by close of business 2006.

"We got it all back on Saturday," says Randy Hanna, the club's president, referring to the January 5 closure of a challenging chapter in their history book. Hanna has even more reason to be thrilled with the return of the items: the architect designed the San Diego Rowing Club's pavilion where the items will be displayed.

"It was the power of the media," said Hanna. "They (Joe's Crab Shack) couldn't afford the bad PR."

But this extremely public battle, thanks to the huge web of AP distribution, eclipsed the real purpose of the club: rowing. For several weeks before the holidays 2006, SDRC was everywhere in the media, wanting to get back memories of the very foundation of a West Coast tradition on Mission Bay.

Meanwhile, members continued to enjoy wading into the still waters of Mission Bay in the morning, honoring a tradition in their own way, by skimming across the same waters as had the clubs founders, beginning in 1888.

Club members are unable to articulate what made rowing in Mission Bay in San Diego so special; comments come out in awed phrases. 'The sunrise…the quality of light is spectacular…the way the sun hits the water is magnificent," says club member Mike Corr, who experiences this little epiphany in the morning as the sun extends its rays across the bay.

Corr has reason to enjoy by his new rowing club. He has been a member of clubs in four corners of the States: Lake Washington Rowing Club in Seattle, Atlanta Rowing Club, and Union Boat Club in Boston. Although he admits that it is tough to beat the tradition and camaraderie of rowing in Boston, San Diego rowing has had a hold of his heart for four years.

'The people are great," says Corr. And why wouldn't they be? They can row year-round, their body of water is relatively flat and open (with the exception of early AM water skiers at times) and they live in SoCal. Whew, hard to beat. The club rows in the same water of the San Diego Crew Classic, held annually in early spring. This year the event is March 30-April 1; the club does not host the event.

"Sometimes fall and winter is better; we have the bay to ourselves and we can work on an aerobic base on the water instead of an erg," says Corr. "Three out of five days the water is glass," he adds. For anyone who has endured a Nor'easter in Boston, where his former club UBC rows, it is easy to see how Corr remains a fan of the water in Mission Bay.

Club members say, however, that despite their happy rowing venue, they do not have the traditional rowing powerhouses to compete against, and the rowing community doesn't extend far beyond their own boathouse bays. At races, Corr says, "We often compete against ourselves." Type-A rowers may find that rowing unopposed lacks satisfaction, others may do just fine with the flat water and long peaceful rows.

The club has almost 300 members-from youth learn-to-row programs, to scholastic and masters. There are about 40 masters rowers, which currently wade into the bay about 5:30 AM to watch the sunrise and cover some miles while much of the rowing community focused on the monitors of their Concept 2's.

Both ORC and SDRC welcome rowers on vacation, in case you don't want to go to Sea World on either shore. Check out contact information at www.orc-rowing.com or www.sdrc-row.org. Yeah, rowers in the Northeast have competitors and tradition, but vacationing Northeasterners could take a look at the other side at either of these clubs - you can leave the pogies at home.