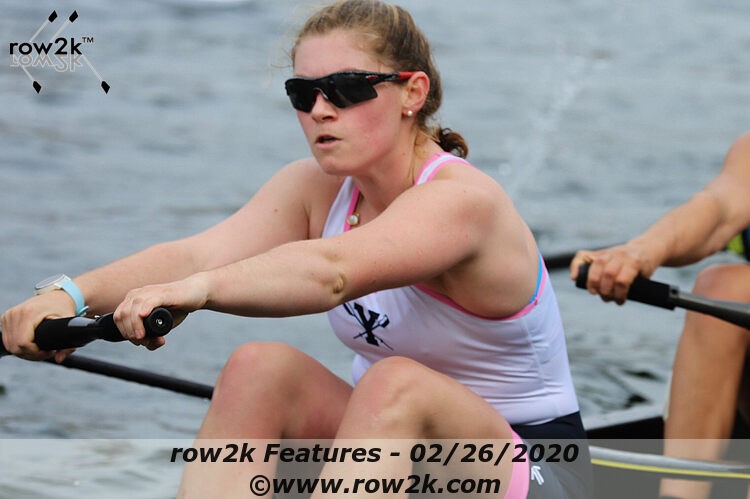 This week's row2k Interview is with Yale senior Daisy Mazzio-Manson. We chat with the 'Daisy' from the documentary, A Hero For Daisy on her lasting impressions from the events in the documentary, and well as racing for the United States U23 squad.

row2k - You are the ‘Daisy’ referenced in A Hero For Daisy, what are your lasting impressions of the documentary?
Daisy Mazzio-Manson - A Hero for Daisy is a documentary about an extraordinary act of the Yale Women’s Rowing Team back in 1976 when denied equal facilities for the women, led by Chris Ernst. And as I get older, I have noticed how my relationship with the documentary has changed. When I was young and I was asked about the documentary I would just respond that I thought it was cool that I was in a movie and honestly, I didn’t think much of the implications behind the documentary. Now, as a female college athlete, I have grown to have a profound respect for women in the film. I am in awe of the strength, bravery and unity that those women showed, at a time when women were not welcome in the boathouse or weight rooms.

It is hard for me to wrap my mind around the mistreatment that they faced and their courageous opposition to power. But there are times during the season when I can’t help but taking a moment and looking at the boathouse, or the tanks, or my teammates, or my coach and thinking how grateful I am for the women who came before me and fought so hard to ensure that, now 45 years later, my teammates and I have access to all these facilities. We get to compete in elite boats, coached by an empowering coaching staff, and we row out of a boathouse that belongs to the women’s team as much as it belongs to the men. We are so lucky to have these resources and I constantly find new reasons to be grateful for the generations of women that make up Yale Women’s Crew who came before me.

row2k - To what extent has Chris Ernst impacted how your upbringing?
Daisy Mazzio-Manson - I know for a fact that my mom, who made the film, rediscovered what having a voice really means. When my mom was about to be cut from the national team, it was Chris who said: “You have to believe. And you have to stop making excuses when you lose.” So, my mom always told me those two things. You have to believe in what is possible and never make excuses for a poor performance.

row2k - When did you get your start in rowing
Daisy Mazzio-Manson - I was exposed to rowing since I was born. I was raised in a house with rowing artwork hung on the walls, trophies in the living room, even an oar propped up above our mailbox. But I didn’t start really competing until I was a freshman in high school when I joined the Newton Country Day rowing team. This team was a perfect introduction to the sport. We rowed on the Charles River, watching elite crews row by and we could feel the excitement of the Head Of The Charles Regatta. But we were not terribly fast and there was a focus on having fun. I felt as though my high school practices were just an excuse to hang out with my friends. At times, we would play music through the speakers of our cox box and sneak sour gummy worms into the boat. As I look back on this introduction to the sport, which we all know can be a grind, I feel so lucky that I got the chance to fully enjoy the sport in a pure way.

row2k - You won a bronze medal last summer with the U23 W8+. What was that regatta like and what was one of the most important things you learned there?
Daisy Mazzio-Manson - The U23 regatta was an electric environment. My entire time in Florida I wanted to be at the race course. The energy before racing starts is so positive. Every athlete walks around with their head held high, representing their respective country. As I waited in lines to check in, drop my bag or wait for an open erg, I couldn’t help but listen in awe as the strong athletes around me spoke to each other and their coaches in different languages. Along with that, I got to see my teammates from Yale (one competed for Team GB, another for Switzerland, one for New Zealand, and three from the US) in a new environment. One of my closest friends and teammates was racing in the Swiss quad and as she rowed past during practices I could hear her shouting in Swiss German followed by a familiar “yeah!” which she shouts in our practices almost daily. But seeing the range of people who all gathered together under that Florida heat to compete was exhilarating. It made me so proud to row for America, to be a rower and to get the opportunity to race alongside such strong women and race against strong women. 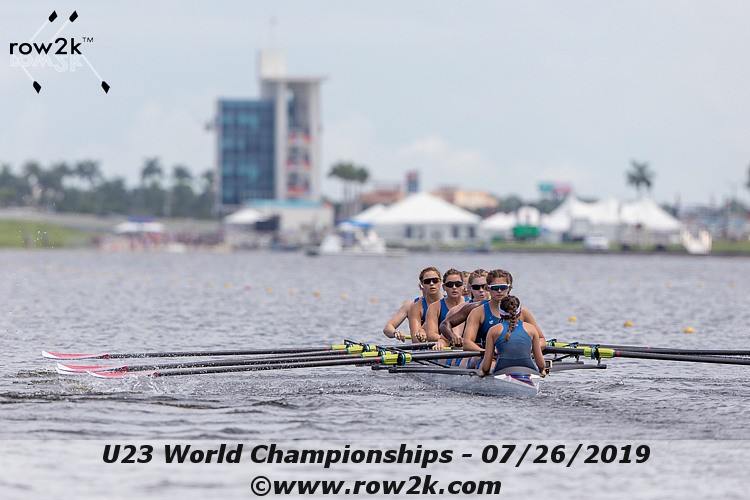 By far the most important lesson I learned was to remain resilient. My event, the Women’s 8, had a test race two days before our final, in which we raced hard but ended up falling just below a medalling position. I will never forget the way that my boat responded to this disappointment. We chose to bounce back from this adversity without excuses or even dwell on our recent shortcoming, but we completely turned our focus to our next race. Instead of talking about finishing position, we instead discussed how we would race better. All of our energy was positive and optimistic, seeing the final as a second chance to perform to our ability. The bronze medal was just icing on the cake at that point.

row2k - What’s your favorite aspect of rowing?
Daisy Mazzio-Manson - I love the people that I get to meet through rowing. My teammates at Yale University are my closest friends. Every time I get tired and the thought of another practice becomes daunting, I just think about how lucky I am to spend hours with my closest friends.

Even the early mornings when we wake up too early and practice too hard, it is impossible to not feel so grateful when the boat is running smooth, with the sound of bubbles coming through the hull, as I glide across the water with the sun rising over the trees, all while pulling with the strongest women I know.

row2k - What has been your most memorable race so far and why?
Daisy Mazzio-Manson - Two summers ago, I got the opportunity to race at Henley Royal Regatta for Yale. We raced for the Remenham Challenge Cup and qualified for the quarterfinals against the Nereus Rowing Club crew from The Netherlands. This Dutch crew was full of women with international, even Olympic racing experience. Meanwhile, this event was for many of us, our first international racing experience, so we saw ourselves as the underdog. We all knew that we were facing a fierce competitor, but that we were all going to go for it as a team and see how long we could hang with them. When we pulled up to the starting line, we knew that it would take all that we had, but that there was a shot. It was the most freeing race of my life. 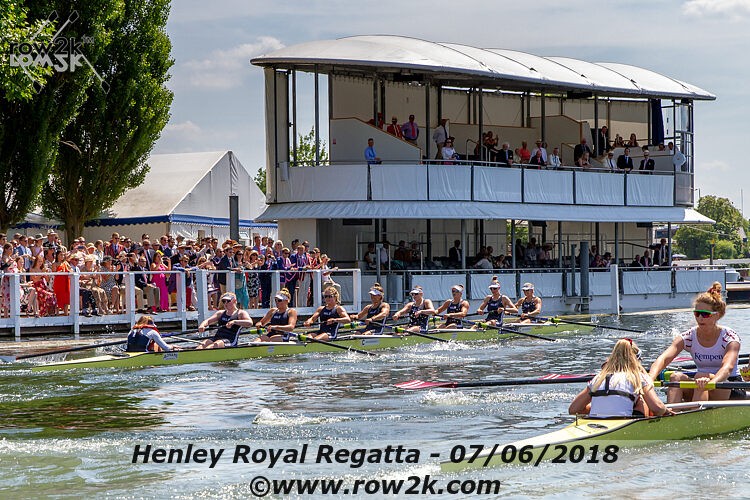 Yale over Nereus at HRR. Mazzio-Manson in stroke

The flag went down and we went off. We were close but the Dutch were slowly walking away. When we reached the final 500-meter mark, I could feel that we were right with the Dutch. Our coxswain called a move and all of a sudden, we started taking seats. First it was slow and we grinded for every inch, but then the seats started to come faster and faster. Soon, I could see the boat next to me and I knew that we had them. I can’t really describe accurately the excitement I had at the start of the final sprint. My boat surged with every stroke and I could see, in my peripheral vision, more and more of the Dutch crew. The sounds of the fans along the riverside screaming and shouting were getting louder and louder. We passed Nereus and without a doubt, this was one of the best races of my life. Before that, I had never raced that free before nor have I ever felt the excitement of a crowd like that cheering as we raced down the course.

row2k - What are you studying at Yale and do you have any plans for after graduation?
Daisy Mazzio-Manson - Right now, I am finishing my degree in Global Affairs, which is a small major focused on country development and security. As I look to my future, I am not sure what field I will go into, but I am sure that I will want to row for as long as I can. I hope to be back at U23 Camp this summer and see how far I can go.

'A Hero for Daisy' - Chris Ernst Rocks the Boat