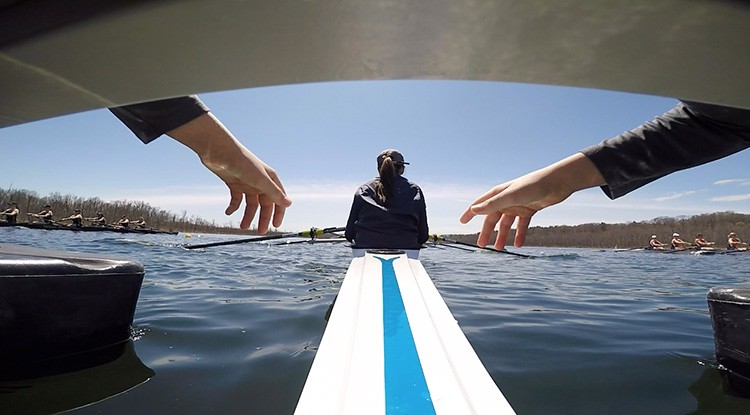 At the starting line of most sprint races, there will be a person in each lane who is responsible for holding on to the stern of the boat and moving them forward or backward to get the bowball on the starting line (or at least even with the other crews) based on commands from the aligner alongside of the course.

The name comes (more or less) from the longtime practice of anchoring a small boat some distance behind the starting line in which a "stakeboater" catches and holds the crews as they are lined up evenly at the start. Even if you will be working on a state-of-the-art starting dock, the job will probably still be called "stakeboating."

As a volunteer job, it can often be very exciting, as you truly become part of the regatta, and are closer to the crews than anyone else in the entire venue. It can also be a fairly demanding, as it requires attention, a little bit of strength, stamina, sometimes ingenuity, and a sense of fairness - you are responsible, after all, for an important part of all crews getting a fair start to the race. 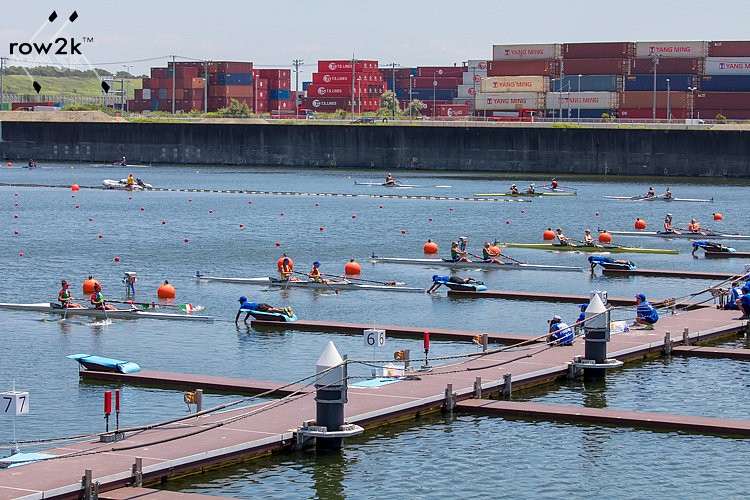 Your office for the day

row2k spends a *lot* of time at starting lines, and we have often jumped in to perform stakeboat and dockmaster duties countless times over the years, so put together the following information and tips to help anyone who finds themselves holding onto the stern of a boat in the intense moments before a race starts be ready for the job, anticipate issues, stay safe, and help get the races onto the course fair and square, then the athletes can take over.

1. Arrive early.
As critical as stakeboaters are to a successful regatta, you may find that the effort to getting you in position is not entirely organized. This is usually due to limited motorboats, regatta folks putting out other fires, and the amateur nature of so much of what makes our sport go.

Arriving early will also let you take care of business; getting your weather gear together, getting any equipment such as headphones that the regatta provides, making a last pitstop before you get on a small platform for a few hours.

Let someone in charge know you are there, stay in sight as best you can, and be ready when the time comes.

2. What to wear, what to pack.
Rule No. 1, at least as far as the officials are concerned: don't wear red. Red is the color of the officials flags that are used for a few different purposes, and a flash of red can stop a race that should not be stopped.

Often you are on a small boat or platform on which standing up is not even really easy to do, so dressing correctly is critical. If it is a bit cold, dress like it is really cold. If it will be hot, dress like you are in the tropics. If it is sunny, get serious about sun protection, at any time of year. 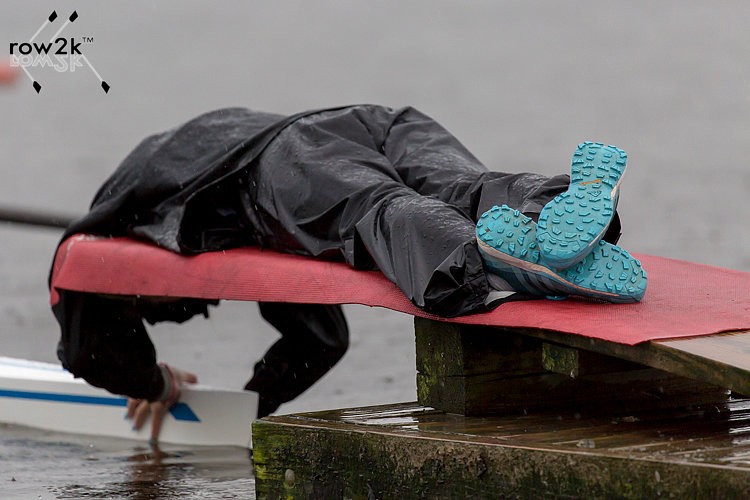 Dress for the weather, and then some

You may also want to bring something to lie or sit on; a lot of regattas provide a yoga mat to lie on while aligning the boats, and we have seen stakeboaters bring small folding or beach chairs out to have something to sit on between races.

One unpleasant fact: a lot of stakeboat docks will be covered by, or if you are lucky just barely clean of, goose poop. Factor this in when choosing what clothes to pack.

Finally, if the event is on 10-minute centers or there are a few breaks, bring a book, your phone, maybe a phone charger, homework, or whatever works best to pass the time between races. 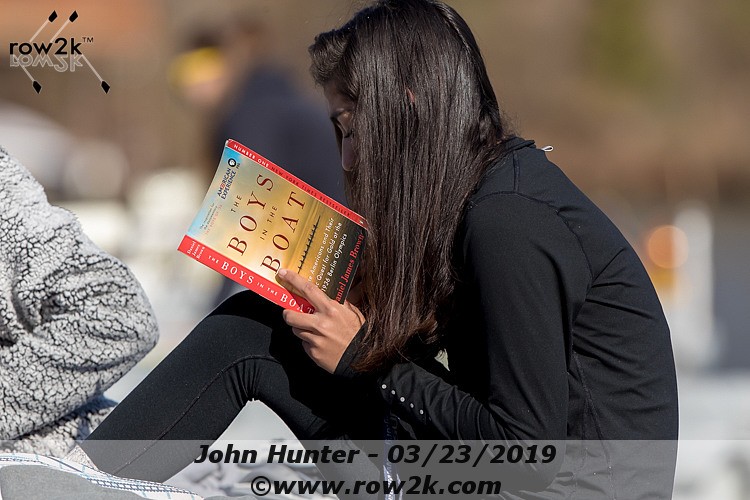 3. Tips for getting on and off platform.
The single most frequent iffy maneuver we see is folks jumping to and from the stakeboats. When you take a leap from a launch to a stakeboat, simple physics says that the launch will move further from the stake when you push, and when you land the stake will also rock and shift.

This is often worse when leaping to a launch from a stakeboat; you are stiff from a few hours in a small johnboat, and your leap may not be enough to avoid a swim.

Add to this fact that not all launch drivers are created equal, and you have to look out for yourself a bit at this point.

When transferring, remember also that you have stuff to deal with; headphones, coats, snacks, etc. Don't take the leap then notice how much stuff you left behind. And after racing, you often have to offload a lot of gear left at the start by crews; jackets, extra gear, waterbottles, etc. Offload all that stuff, then make your move.

4. Docks vs. boats vs platforms.
In most cases, you will be on one of the following: a dock, a boat, or a floating platform. Some venues might have you standing in the water, or on some other improvised contraption, but these are rare.

Docks are the easiest to work from in almost all cases, and when they have 'fingers' for you to lie on while aligning the boats, the job gets fairly easy. If you are being dropped off from a launch, still take care when getting on and off the dock, as noted above.

Most "boat" stakeboats are small metal johnboats, not terrifically stable but not too bad, as you will have something to sit on. Some courses use small sailboats. The main challenge of this setup is moving the boat back and forth more than a few inches; we will address this in #11 below.

Floating platforms usually split the difference between a dock and a boat; it is sometimes easier to move the racing shells around from a floating platform, but you may be on a very rustic, flat surface, and you may need to bring something to sit on between races.

5. Be ready.
As crews start to approach the dock, things can start to happen pretty quickly; they pull in, back up, and - especially if the regatta is on a tight schedule - line up and are gone. Some regattas will run a race every five minutes, so you can be busy. (For the record, this often beats the alternative, as doing stakeboats on 20' minute centers can be pretty boring.)

6. Make yourself visible.
When a crew pulls into the starting area, they may have never been there before, and are figuring it out as they go under both time and performance pressure. Be in position and heads up so it is obvious where they should go, that you are ready, and that they can go about the business of getting their shell in position. 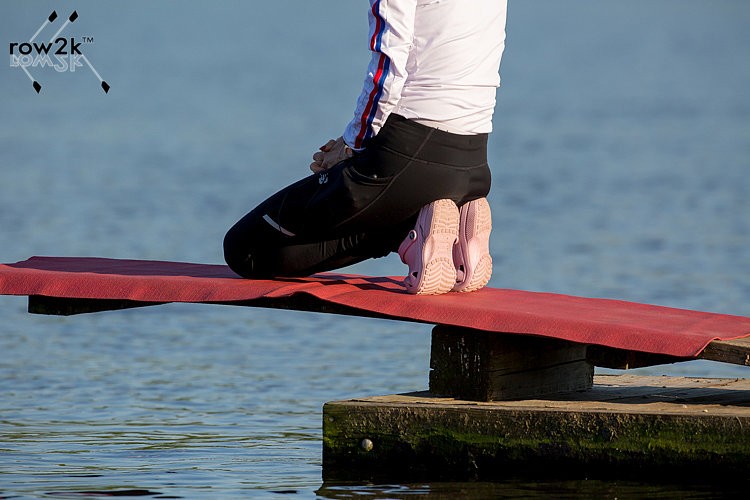 Be visible and ready

7. Tips for catching the boat.
An eight can have 1800 pounds of persons in a 200-lb. boat, which is fully a floating ton of a system headed your way. Your job at this point is to catch the boat as they come in, but you want to have a strong mind to your own safety.

If they are coming in too fast, or are off course, don't be a hero and try to stop them from ramming the dock, or reaching out and making sure they don't miss the dock. You can do these within reason, but we have seen some very ugly accidents in these cases, especially when a crew is coming in too fast - without getting too graphic, a hand or finger does not have a chance if it ends up in between an anchored dock and the sharp stern point on a moving shell filled with a literal ton of rowers.

So when catching the boat: 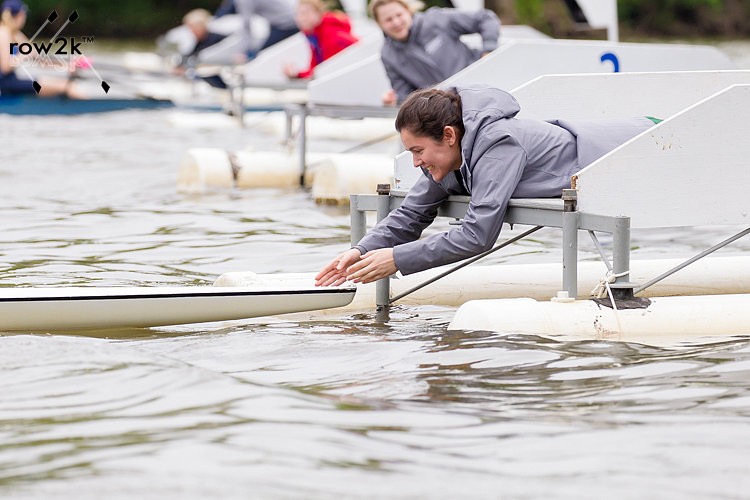 8. Tips for holding the boat.
Once the boat is in position and you have a hold on it, you are going to have to hold on pretty tight. Some recommend a crossed arms approach, where your right hand is on the left side of the hull, and your right on the left side of the hull - but in actual practice this type of recommendation is nice for perfect conditions but a distraction and ineffective in practice. Get a good hold, and hold tight.

At this time, the crew will be making adjustments to their point, sometimes frequent and fairly aggressive. Add in some wind, and handling the boat at the start can get tricky. We will be doing an article in the near future with tips for crews on handling the shell at the start, but for your purposes your job is to hold onto the hull as firmly as possible. Having a crew come off the stake repeatedly because the stakeboat person lets go of the hull too easily can create havoc at the start, for officials, crews members in all the lanes, and for you.

9. Watch out for flying water bottles, giant bags of gear, and more.
Once a crew is locked on, they will often need to offload extraneous gear, water bottles, and other stuff before racing. If they need to hand you things, feel free to pull the boat closer to you so you can grab stuff, maybe ask the coxswain to hold on to the stake while you put their stuff away (as quickly as possible), then move them into position again. 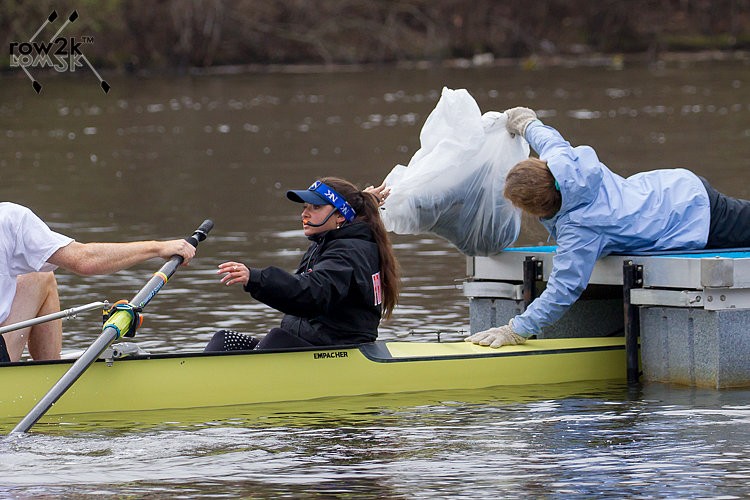 When it comes to water bottles, many crews throw them to, near, over, and around the stake person; catch them if you can! Remember, though, that your main job is to keep the crew on the stake and ready to race; it might fall to someone else to collect water bottles and other flotsam. 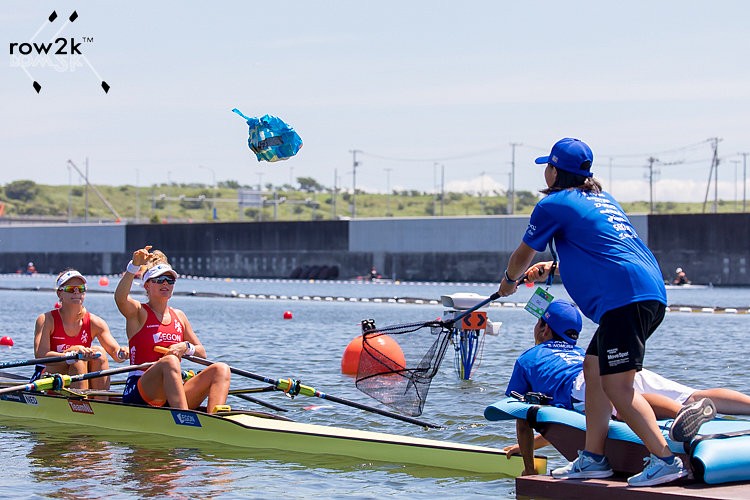 Watch out for flying stuff!

10. Listen for commands.
Once the crew is locked on, the actual job of getting the bowball on the starting line begins. Typically this is done in one of two ways: using a headphone system, or by someone with a megaphone or bullhorn of some kind. In the latter case, the commands will usually come from one side of the course of the other, and may be hard to hear, so you will need to be alert.

If you can't hear the commands, try to let the aligner know, and they will have to adjust so they can be heard.

11. Tips for listening to commands and adjusting the boat. 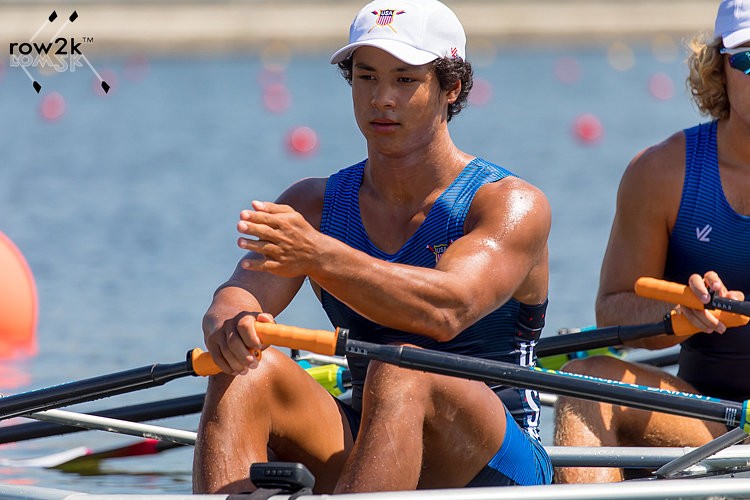 Adjust the boat as instructed

12. Troubleshooting.
The most common problem you will have at the start is when you can't do what the aligner needs to be done. This can be caused by boats that are very different lengths, stakeboats that were not placed exactly right, a combo of these, and other issues.

In these cases, try the following:

13. Stay down low until crews have left starting area.
Once the crews take off, stay down until they clear the starting area so that the starters, film crews, photographers, etc. can see the crews as they race away.

14. Sportsmanship tips.
We often see stakeboaters chatting with the crews, helping out a bit, and generally just being pretty normal; this is fine. Many rowers are calmed by seeing that their stakeboat person is relaxed and even friendly; just keep it within reason and at times when the officials are not giving instructions. Cheering for crews as they race off is also usually frowned on, and the next crew is already headed your way. 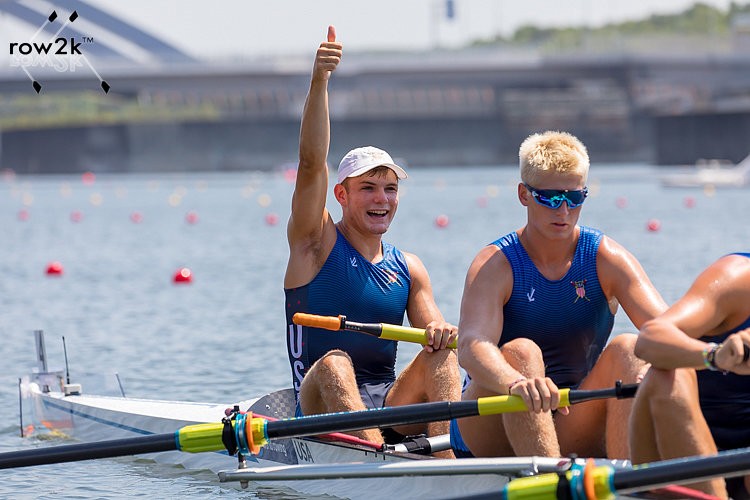