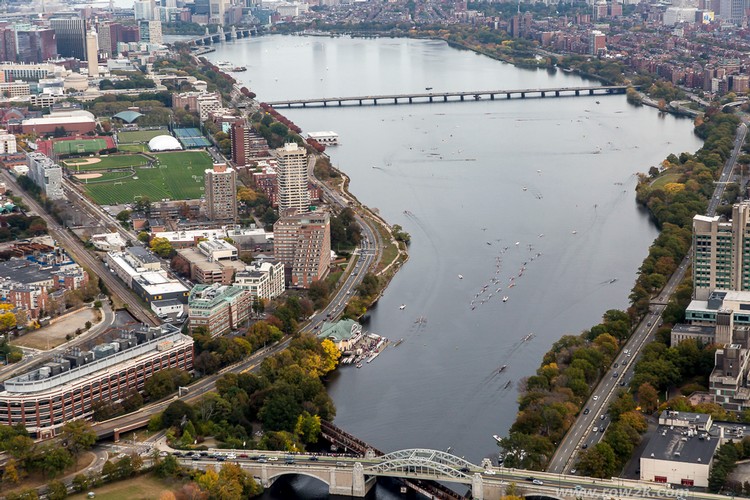 MIT and the Charles River from elevation 52 years

Young men confined to s shared living space exhibit the tendency to commit, over time, deeds after fashion in the chart below. The cited study investigated population densities of two and three, documenting a geometric relationship between the variables above and density. In a population of four, the curves become asymptotically vertical.

For those who view science as another religion, the case analysis from Room 506, Bradford Hall, M.I.T., Cambridge, MA from June to August 1968 is here presented as proof with which no reasonable person can argue. 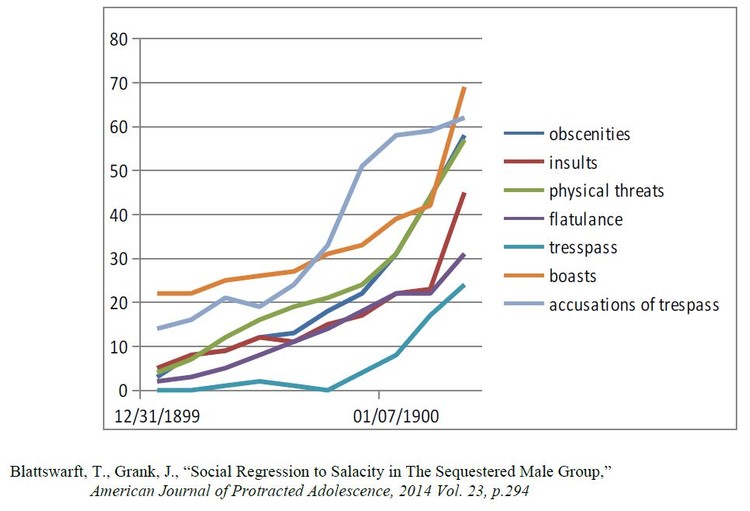 Even young men, even those face-down in the lowest snake track in gutters of their social construct, may for perhaps an instant, envision (looking straight up) a better world, a world of gentle kindness and concern, of civility and grace under The Golden Rule. Such a moment, nothing less than a divine visitation, occurred after many weeks of intense rowing practices separated by long workdays in found summer jobs, meals, and sleep. History does not identify the voice selected by the gods of charity, but one evening after dinner, with the four sprawled on their equidistantly separated beds, someone observed that the obscenity, contempt, and generally abysmal tenor of discussion required attention. Someone else suggested that for one twenty-four hour period, everybody should be as nice as possible to everybody else. Be Nice To Everybody Day was conceived.

While the concatenated intelligence of the four generally was a tenth of that of any single individual, in the rare atmosphere of that evening (think Constitutional Convention) everybody agreed that nobody would be nice just to be nice, that the only route to grace lay through competition leading to the crowning of The Nicest Person of All. Other than this general approach, there were no rules. Being nice doesn’t follow rules; it is a state of mind, of being.

That evening (anticipating the twenty-four hours that would begin and end with waking), anxiety, especially regarding swearing, unnerved the polis: how could one conduct an entire day without swearing when for over a month every sentence had contained at least one, often as many as seven, profanities? With a mind to flushing the soul-system of its poisons, the four streamed into the calm of that midsummer night air a relentless gush of obscenities, some odious enough to trigger cycles of ad hominem assaults implying, basically, that soul-cesspools of certain characters had been unmasked.

It is not possible to know precisely what another person is thinking or feeling, but once the systems had been evacuated and, perhaps in exhaustion, the foursome turned to pillows each, one could bet that in such silence the competition had already begun, each contestant envisioning his strategy, execution, and coronation; after all, the summer had already provided proof of - what is the opposite of "niceness"? - of one’s suitemates, so even a mild improvement in manners, especially in view of the utter absence of impulse control, promised easy victory. So they fell into smug silence punctuated by sputters of "Shit-for-Brains," "Miasma-breath," and so on.

Three didn’t know that long before the dawn of Be Nice To Everybody Day, they had already lost, though they might have sensed their demise by correctly interpreting the snort that escaped the author’s pillow.

I rose first, according to plan, and while the three lay helpless as lambs to the slaughtering wolf, I kissed each on the forehead with a cheery, "Good morning!" There they were, barely awakening, prevented by their pathetic ambitions from venting the outrage that pressed out in muted groans. I pranced to my morning ablutions.

To anyone campaigning for niceness in the world, a word of caution. Niceness can be nice, but in the extreme leads paradoxically to unresolvable conflict; to wit: four exceptionally nice young men attempting to pass through a door.

Gary Goodbody: (gesturing) Please, gentlemen, allow me: after you.

Davy Slow-Slide: (gesturing) Oh, no, please after you, I assure you.

Golden Foyboy: (gesturing) May I generously resolve this issue for you? Please, after you both.

The Author: (gesturing) I absolutely insist, you must go before.

Gary Goodbody: (gesturing emphatically) No, that cannot be, you all must precede.

Golden Foyboy: (gesturing emphatically) You are all too kind. After you, as I have said.

The Author: (gesturing emphatically) Rest you fair, good sirs all, and begone before.

Gary Goodbody: (threatening gesture) Upon my life, I cannot but pass last.

Davy Slow-Slide: (threatening gesture) Don’t be so … nice. You each go, then I.

Golden Foyboy: (threatening gesture) There is but one way, which is that you each go ahead.

The Author: (threatening gesture) The overweening gentleness in my nature requires that I go last. After you.

Only the clock’s movement toward the hour of practice broke the stalemate at the door. It was agreed that the doorway must be shared equally and simultaneously—no mean feat given the breadth of the average heavyweight oarsman.

All that day: problems. The State Street Bank's less kind employees and clients, stymied at the threshold of elevators and doors, sought alternative routes. Lines in cafeterias rerouted around gesturing, bowing oarsmen. Food nicely plopped on another’s plate was scooped and replopped on the next’s. And the exchange of compliments…

Gary Goodbody: My, your coiffure is splendid of this fine morning, Mr. Foy.

Golden Foyboy: Why, thank you, Mr. Goodbody, but I confess that my ’do is styled in a failed fashion after the unparalleled standard of your own.

Gary Goodbody: A startling coincidence! That this rat’s nest is a pathetically flawed emulation of your divine creation.

Golden Foyboy: Why, that simply cannot be, as you had addressed your own luscious locks before I entered the salon, so clearly you could not have copied mine, but I yours, and am the better for it.

Gary Goodbody: Oh, you are too kind, but perhaps not kind enough, as I did my hair this morning with the glowing memory of yours from yesterday.

Golden Foyboy: (and so on)

Acts of kindness, such as carrying another’s oar, became violent struggles on the dock.

Bedtime dragged on as wishes against bad dreams and bedbugs ricocheted off the walls in patterns of escalation and deflection.

The next morning exploded with curse-peppered arguments backed up with facts and fictions in favor of each speaker’s preeminence as the nicest of all possible people, arguments that endured through meals, commutes, and, after dinner, the scheduled meeting for the crowning.


The reader may draw his or her own conclusions regarding the efficacy of niceness; I would provide this service but am too nice to do so.

The denouement was, perhaps predictably, enacted from the corners of that living space, arguments constructed of fact and fantasy hurled at across the 'tween-bed-spaces as the citizens insisted, variously, on their unimpeachable and incomparable niceness, arguments not free of aspersions, accusations, character defamations, and, sadly, ungentlemanlike language. Probably few inspirations to the young man's imagination are so powerful as the primal need to assert one's qualifications for the highest place on the pile, whatever the content of the pile may be. That night, in outrage at allegedly corrupted election results and the thwarting of overweening self-esteem, the four nicest people in the world trained their well-practiced manners upon each other's souls. 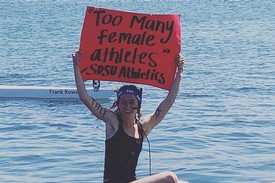 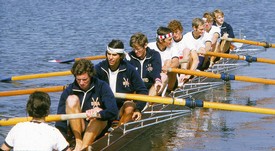