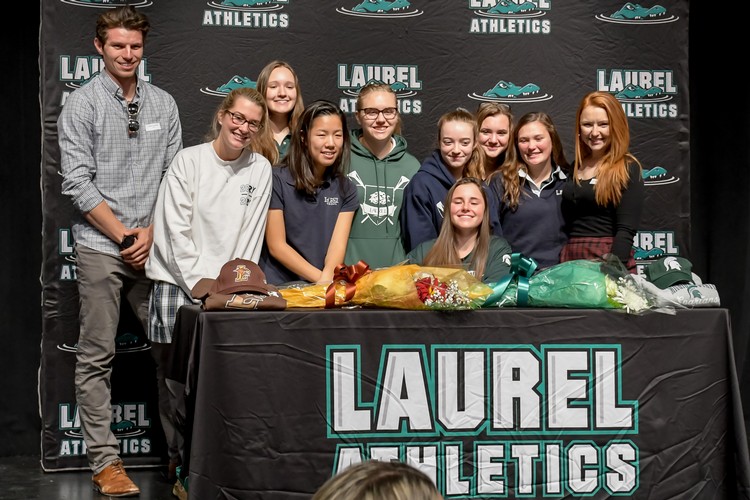 By the spring of her high school sophomore year, Lizzie Johnston was sure of two things - she didn't want to play high school field hockey any longer, and that rowing looked like a sport she wanted to pursue instead.

"I played field hockey my freshman and sophomore year in the fall, but it wasn't that fun, it wasn't a sport I that I enjoyed," Johnston said.

Living in an area where there is a strong rowing community, with several high school programs, and a large community-fed club organization in the Cleveland based Foundry, Johnston knew that if she wanted to row, there were opportunities.

"A lot of the high schools in the area have teams, so I always knew it was a possibility. I never really thought about it. But I went down to the Head of the Cuyahoga River, which is our home head race, and saw what it was all about and I knew I wanted to try it."

Johnston, however, wanted more than to row in a club program. She wanted to row for the Laurel School, where she attended high school in Shaker Heights, Ohio, and she wanted her classmates to row with her. So, she took her idea to her school administrators.

According to Kathryn Purcell, associate head of school, Laurel is a place that likes to engage students in their ideas, likes to support these kinds of individual efforts, and they were interested. But they also put the responsibility on Johnston to figure it all out, come up with a plan, and come back to them.

Which is exactly what she did.

Today, Johnston is the founder, captain and coxswain of the Laurel High School rowing team, which is now a club sport officially supported by the school's athletic department and the team's parents. And Johnston is on her way to Michigan State University, where she has just accepted a scholarship offer to join the rowing team next fall. 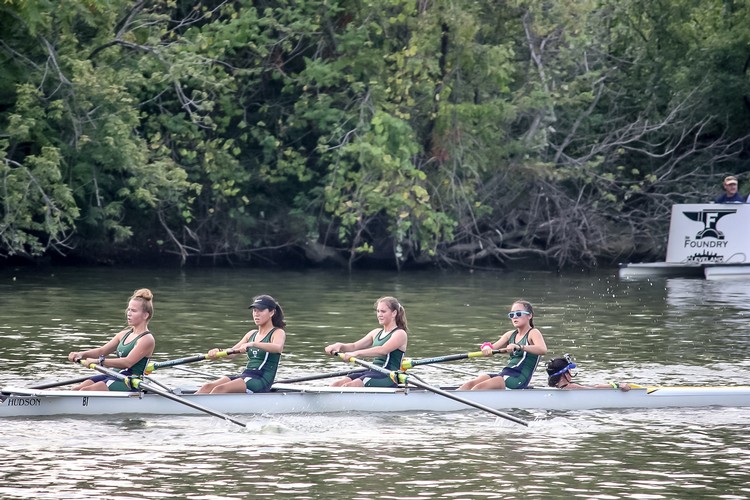 "We are just so proud of her," said Purcell. "It's a really cool story."

Talk to anyone that has been involved in Johnston's effort to be a high school rower, and to have her team to carry the school name, and no one is surprised she pulled it all off.

With the school's blessing and assistance, Johnston started investigating the possibility and went to the Foundry to talk with representatives there.

The Foundry is a large enough club that it had both the ability to have Johnston participate with the club's youth rowing program, and a program that enables schools to get started if they want to have their own, school associated, team.

Harvey calls it a "kind of a team-in-a-box. It's a great program to help get schools started." The students pay a per athlete fee, and are provided access to equipment and coaching.

Johnston looked past the idea of rowing on the club program, because - as she puts it - "I wanted to row with my school. I didn't want to row with tons of people I don't know."

She brought the options back to the school, presented them to the administration. A decision was reached to see if there was enough interest to put together a startup spring program that would not compete right away, but take the time to generate interest while keeping per student costs down and just practicing and learn three times a week late in the day.

With the school's help, Johnston got the word out through morning announcements, emails, and posters. She was surprised to have interest from 15 students. The startup worked for that first year, but Johnston explained that everyone knew that being a team that could actually compete meant training like a team that is intent on racing.

"The coaches told us that if we wanted to be competitive, we would need to practice five days a week, it wasn't going to happen if it was just three days." Going to that next level meant a bigger commitment in time and resources for the athletes and their parents, as well as the school. But Johnston was surprised to find that the interest was there. 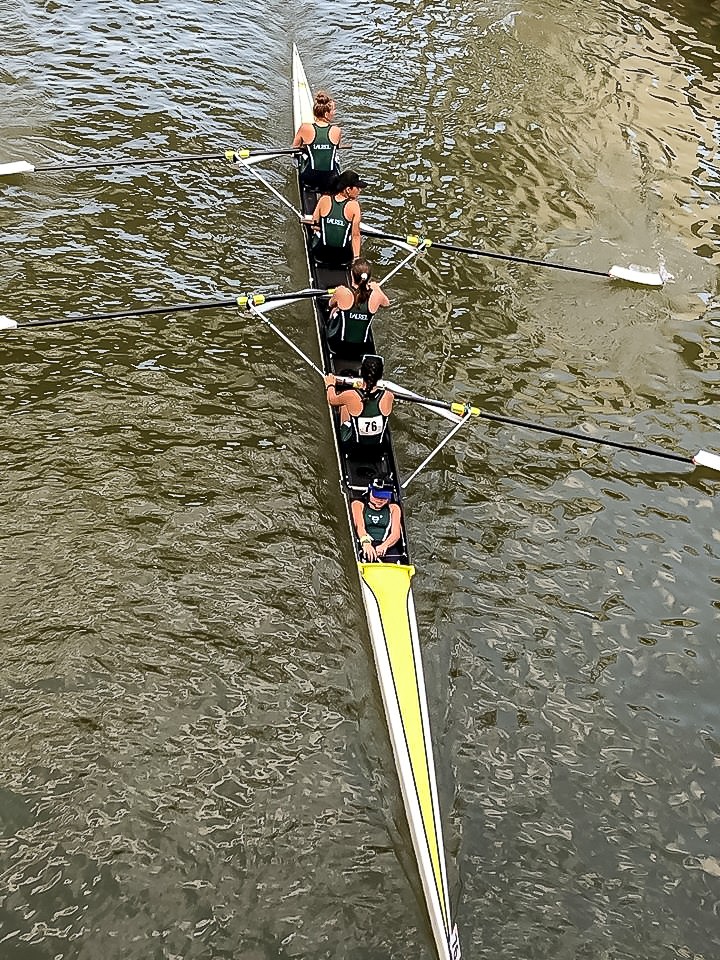 "We decided to practice five days a week, and pay a bigger cost," Johnston said. Without school funding, that would all have to come from the individual student's families. That worried Johnston. So, did the idea that they would go from a three afternoon practices to at least five days of pre-school practices and weekend racing.

"We thought, oh dang, nobody is going to come to these practices," Johnston said. "We're not going to have a team anymore. But that didn't end up being the case. We ended up getting more girls, so that was pretty great. And the program just continued from there and we actually had more girls row in the fall in my junior year than we did my spring season."

According to Harvey, the team raced 15 girls this fall, and is expecting that there will be a roster in the mid-twenties in the coming spring. And they are beginning to hold their own in racing.

"We had 13 girls last spring, and somehow my boat was placing, which no one thought was going to be the case," Johnston said.

Johnston said from the moment she began rowing, she fell in love with the sport and decided she wanted to continue past her graduation. She began contacting schools to learn about the recruitment process, and was surprised that some schools reached out to her.

This month, Johnston signed a letter of intent to row at Michigan State. For Johnston, it was mission accomplished. She found her sport, started a program, will row at a Division I, Big 10 school, and leaves a legacy behind at her school that other students can follow.

The school is also, both for the fact that Johnston has earned a scholarship and because she has created a legacy that will benefit the school and its students.

"They could have just rowed with a group of other high school students as part of a club downtown, and not be named Laurel Crew. The good thing was that was a backup," said Purcell. "It felt important to help her try and see if she could get this going. So, athletic director Dave Meyer, and head of school (Ann Klotz) gave her our support.

"She had a very strong positive response, and had many more people than she expected show interest. Once that happened, it exploded as soon as they got on the water. It's one of those sports that really draws people in in a way that brings out a passion in them. It's a real connection that they feel if it's the right thing for them.

"And for some of our athletes, it was just the right fit. Maybe another sport wasn't hitting all their buttons, but this one spoke to them in all the right ways. So, they have had consistent number of students in order to support a Laurel team," she said.

The progress has resulted in the school backing the program and contributing financially.

"We feel like it is a full, positive story all the way around, but one that is centered on a girl who had an idea, and set up a plan, enacted that plan, and has followed through as a captain and a leader and then had this amazing outcome of being a recruited athlete as well," Purcell said. 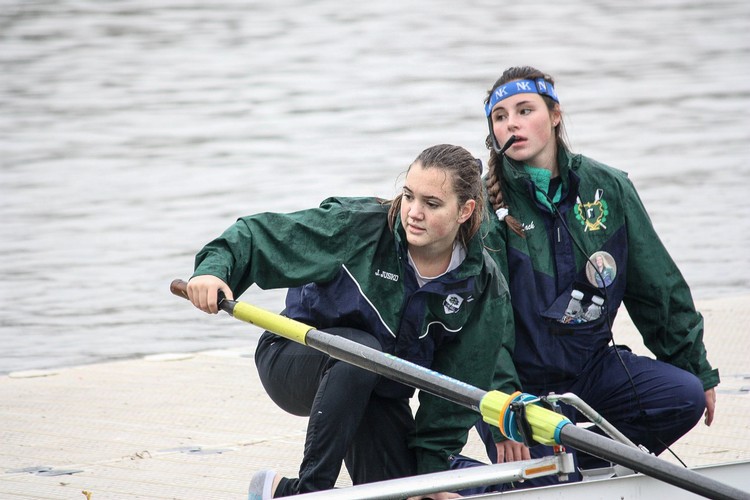