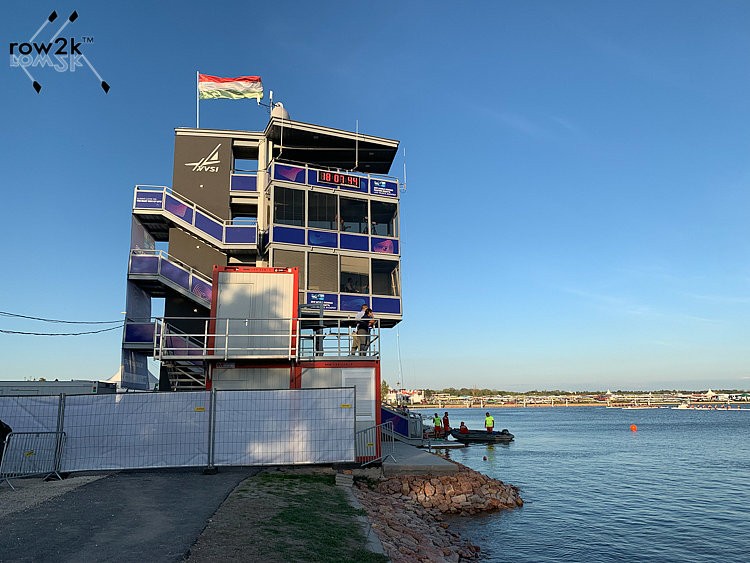 This was only my second time at the World Masters regatta. The first was in 2006, when it was held in Princeton, New Jersey. I was nursing a foot injury - plantar fasciitis - and was doing more coaching than rowing that year. I jumped in a double with my friend and club-mate, John Yasaitis, the amazing "miracle man" who had survived an infamous head-on collision with an eight a few years before and became a case study in the New England Journal of Medicine. We got ahead and stayed ahead, and we won the 1st place medal with what seemed like relative ease. I didn't know it at the time, but at that time, every race down the course at the WRMR got a first, second and third place medal. That seemed a bit much. I deemed the regatta "Kindergarten field day" because it seemed like "everyone gets a prize." Or at least 50% of the participants (I recall that the course was only six lanes). 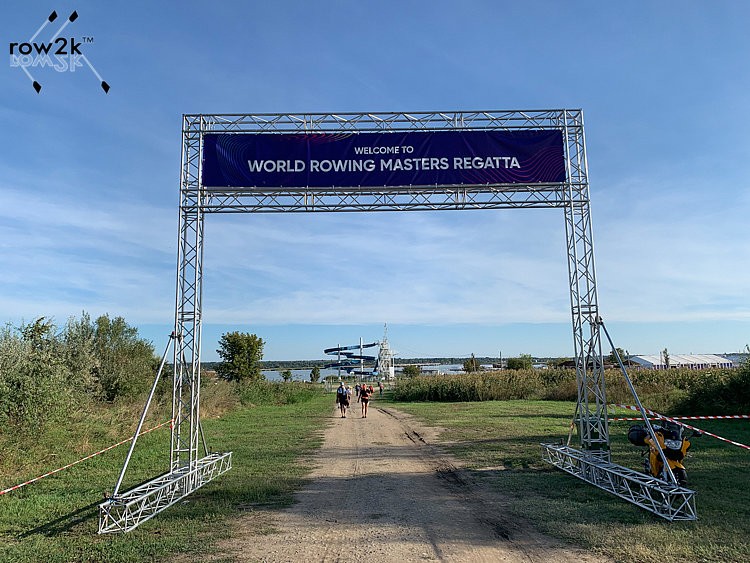 This regatta in Hungary was different; they had made some good changes. For one thing, they did away with 2nd and 3rd place medals. They also widened the course to eight lanes. It's understandable that it's not a "true championship," like Masters Nationals. The number of entries is too staggering to do a full progression- both my D and E single events each had 150 entries. That's a lot of winnowing down in heats, quarterfinals and semifinals, and in fact, just not feasible. Plus there's something kind of fun of racing in a "luck of the draw" heat - you don't know who you're going up against. It's all one big lottery. 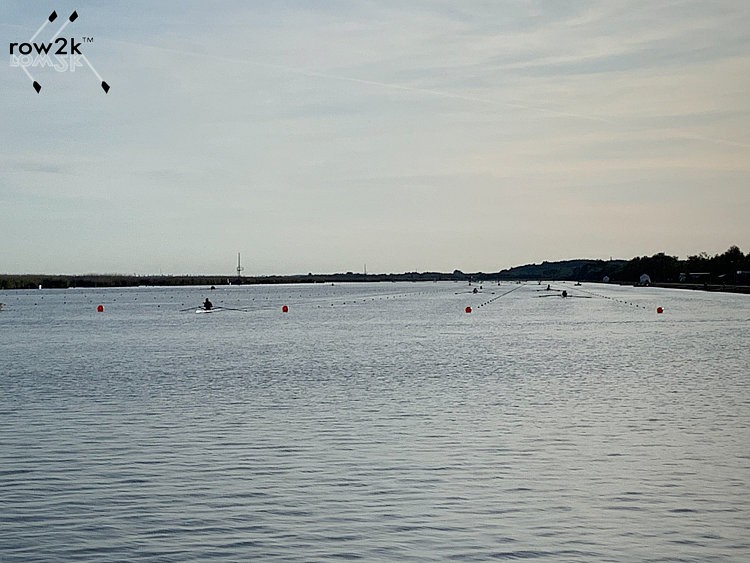 Having warmed up to the concept of going hell-bent-for-leather over 1,000 meters in the D single the day before (after lollygagging around Italy and Eastern Europe for two weeks), I was primed for the E single. Again I had a good start, but this time I was able to maintain it after 30 strokes. I was in lane one, which was closest to the shore and therefore "in the lee" of the crosswind (a nautical term meaning on the leeward side of the land, with the land providing protection from the wind). The land was off my port side, and lanes 2 through 8 were off my starboard. For sailors, my port side was to my right and starboard was to my left. Because we're going backwards. Confusing? Nahhh...

Unbeknownst to me, the guy in lane 8 also got a jump on the start - apparently more than I had, because I never saw him. So I'm eyeing lanes 2 through 7, and I was able to stay ahead of them throughout the race. By the 500, I had pulled away a bit, and by the finish, the nearest boat was 3-4 lengths back. I couldn't believe it. I thought I had won. But as I approached the line I heard a whistle before they whistled me. Sure enough, I had been beaten by six seconds by Ferarri Omar Teodoro, who made many Turkish national teams and apparently works out three times a day and literally does nothing else with his time but travel around from race to race. At least that's the story I was told by someone who knows him, and I'm going with it.

You see, masters rowers are a funny breed. We take all of this SO seriously that some of us, sometimes, might be prone to making excuses when we don't win. In any case, I kind of wish I had known he was there, because at least I would have attempted a sprint and tried to close the gap. Now, with him being ahead, he would have seen said sprint and I'm sure he would have responded. But it was part of my post-race self-analysis, which is another thing masters rowers do TO DEATH. In any case, while I was sad not to have won, I felt pretty good about turning in a decent performance. 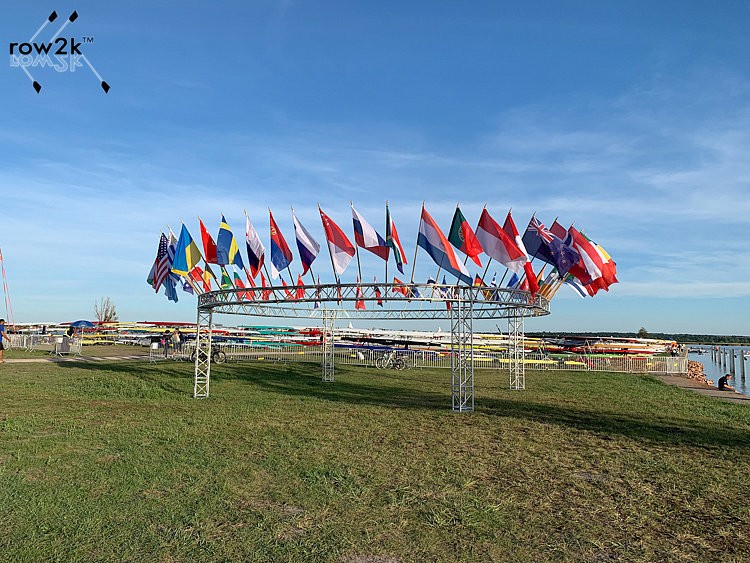 I have actually reached the age where I no longer look at it as life-or-death if I win or not. I lost two friends this past spring - Jim McGaffigan, one of the strongest, most talented rowers I've ever met, and Dave Schultz, who died during a triathlon. Jim was 53 and Dave was 40. Both were sudden and unforeseen. So as cliché as it sounds, "just being out there," especially at a regatta like this, is pretty freakin' awesome. Nevertheless, when you're sitting on the starting line, especially if you're me, all you want to do is win. And yes, there have been times in my rowing career - especially when I took it SUPER seriously in my early 40s - that if someone said, "You're a winner just by being out there!" I would have punched them in the nose. Age and perspective can add a lot of wisdom. 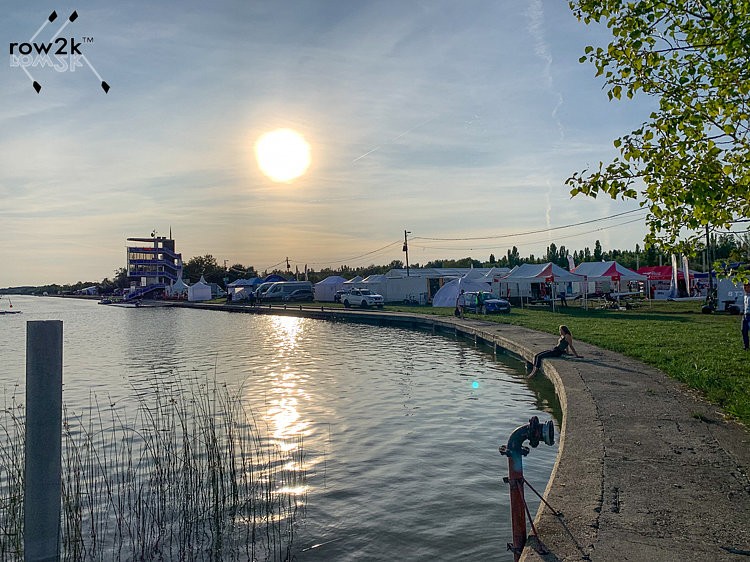 The fact that the result "is what it is" is one of the most beautiful parts of the sport. I love the simplicity of the final times and places. There are no excuses. Sure, you could have done this, and you might have done that, but you can never say "I would have won if such and such had happened" (that doesn't stop people from saying it!). My standard satirical excuse when I come in second (and spoken with tongue firmly in cheek), is, "Yeah, I would have won… except the other guy beat me." I developed that one in the 2010 Head of the Charles, in which I had bow #1. As I rowed back, people at Newell said, "John it looks like you won!" Well, all the results were not in - the rest of the pack had not finished. Apparently a guy named Peter McGowan (my own personal Bucky Dent, for Red Sox fans), started way back in the pack and crushed the field. He won by like 30 seconds or something. He is and was a phenomenal oarsman. In any case, by the time I got back to Riverside, my friends said, "Sorry John, looks like you came in second." Oh well! 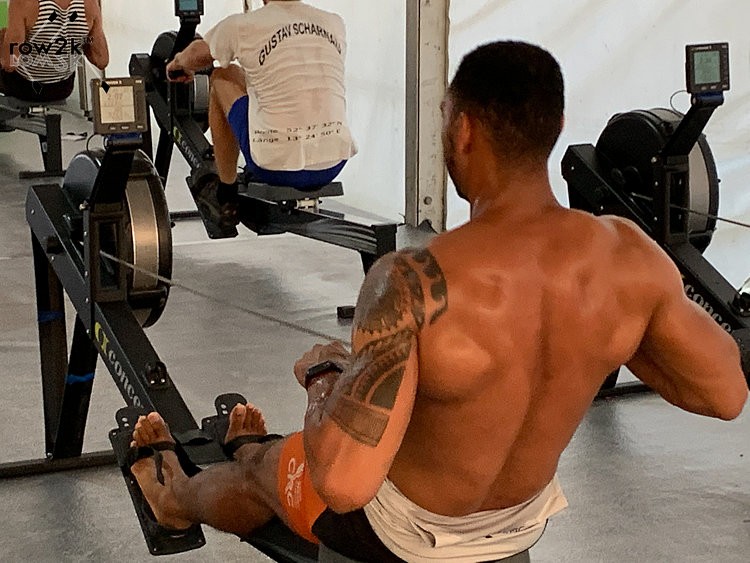 Glad I don’t have to race against this guy

Having gotten second in the event I cared most about, and having recovered and being okay with it, we now came to the event I cared almost as much about - the E2x. On Saturday, my friend Trevor de Koekkoek and I had our chance for redemption in the double. If you think de Koekkoek is a funny Dutch name, that's because Trevor is a funny Dutch guy. He definitely marches to his own drummer, which I respect and enjoy tremendously. He's also a very strong rower. He used to live in the Boston area and was a member of Riverside, where I got to know him, but he has since moved to his ancestral home of Holland. Like a lot of masters rowers, and like me, he is occasionally prone to injury. However, he was in good form for this regatta, placing second in different heats from mine in both the D and E single (in the D, my time was half a second behind his - it was cool that we were so close). 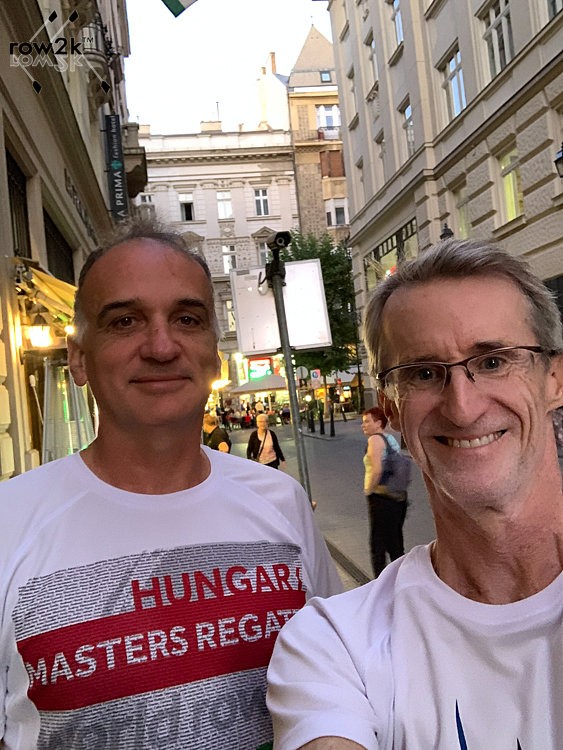 Trevor and me after our race

In good masters rowing form, our warmup row was the row up to the start. We were a little wobbly, but a lot of that was due to a pretty nasty wind, which created some pretty nasty waves, not to mention that it was our first row together in many years. Our "tens" were okay but not great. When we found some flat water, we did another ten, and we killed it. We have rowed and won together before, so we know each other's styles and make for a solid team. Plus, we are good friends, so there's a good vibe in the boat, and I've always felt that that is one of the most important ingredients.

We had a very decent start and held our own throughout the race, despite one boat being a few lengths ahead. Two other boats were right with us, however, as we approached the final 250. As we had discussed, we called an all-out sprint, and we managed to get 2nd place by less than half a second over third, having passed them in the sprint. Since first wasn't going to happen, we were very pleased with this result and with our performance. It made for a nice end to a great three days of racing. 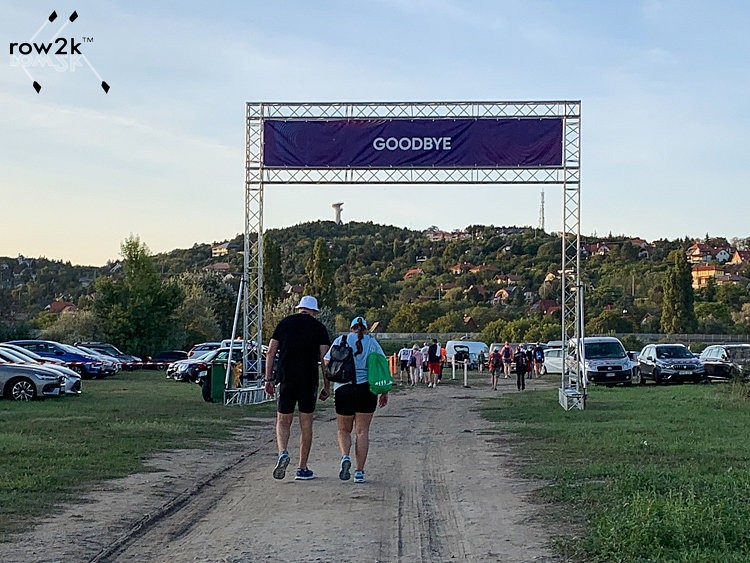