Not that you'll need to know any of this for practice, but -- as a way of celebrating rowing's 6000-year (or longer) tradition, "Believers" will occasionally carry pieces on ancient rowing history (Egyptian, Greek, Roman, Norse, Venetian etc.), beginning with a people who had the good sense to build an entire civilization around their river.

The Nile has been a good place to row for six thousand years. The current flows northwards and the wind blows southwards. Aside from the dangerous cataracts where the water became shallow, rocky, and rapid, a trading voyage to the Nile delta involved rowing downriver with the current, then hoisting the sail and sailing back. The Ancient Egyptians seldom needed to go out on the sea itself (the "Great Green") because Minoan and the Phoenician traders were already voyaging to Egypt to trade, and the Egyptians -- who were very fond of their homeland and hated to leave it -- were mostly content to leave blue-water sailing to others. Queen Hatshepsut's famous trading voyage to Punt was primarily a coastal voyage.

The Ancient Egyptians were great believers in specialization of skills. They applied this detail-consciousness to their rowing, which they considered to be a sacred activity (many of the trading ships belonged either to Pharoah or else were the property of the temples -- in either case divine property). Not only were there several words which might be equivalent to coxswain, there were also several ranks which seem to correspond to the Stroke and his subordinate Strokes -- i.e "Chief of five of the boat," "Chief of ten of the boat," "Chief of one side of the boat," "Chief of oarsmen."

Chiefs of sixes are mentioned, but rarely; most Ancient Egyptian ships were 30-oared, or 60-oared, and some (for moving large obelisks) were claimed to be as large as 500 oars. Because the bow and the stern of Egyptian ships were higher off the water than the middle, the outboard sections of the oars were different lengths depending on their position along the hull. The bow oars were particularly long -- sometimes almost double the length of the midship oars -- and the inboard length was the same, so the loading on them must have been enormous.

One of the Egyptian hieroglyphs for coxswain showed a staff with two eyes (the same eyes that were painted on the bow of every Egyptian ship). There was also a glyph meaning "he who stands between the two [steering] oars" who was presumably the chief helmsman. "Chief of steering/piloting" (we have the glyph from the tomb of Sendemib who held that rank), also corresponds to coxswain, although "pilot" implied added responsibility for the rigging. Instead of CoxBoxes and speaker systems, Egyptian coxswains had people called "order transmitters" whose duty it was to relay their shouts the length of ship to the crew. Larger ships carried a singer on board to maintain proper stroke ratings.

Some words never change; the Egyptians used their word "eyes" to describe the metal sleeves for threading ropes through exactly as modern English uses "eyelet." Backstays -- which were actual ropes supporting the masts (there being no equivalents of riggers) translate literally as the "behind the wind rope;" forestays were the "before the face rope." Oars turned on thole pins which stuck up from the gunwales, with leather collars and loops to pad them and to hold them in place. (Hey, I remember wooden oars with leather collars!) The hieroglyph for bailer shows up in a number of contexts and variations; apparently this was an important word for the Ancient Egyptians (!). The hieroglyph for "to bail" shows a little anthropomorphic head with stick arms in the prow of a ship pouring a stream of water out of a jar. Starboard and Port were different words -- or perhaps the same word with different declensions. Likewise, the hieroglyph for a northbound ship (rowing) was different from the hieroglyph for a southbound ship (under sail). There was a word "sha" which is hesitantly translated as the "beat of oars" (i.e. against the side of the ship?). It might also have meant "stroke." If so, the glyph for "push sha" is no doubt waiting to be discovered, along with the glyph for "I got bowball!"

From the many model ships which have come down to us, it looks as if the Ancient Egyptians feathered their oars on the recovery, but the benches do not seem to have had slides. There is a detailed -- and poignantly lifelike -- model ship from the tomb of the chancellor Meket-Re which shows the rowers in a classic hands-away position, backs straight, eyes up, chins level. They have been pausing hands-away now for almost 4000 years. 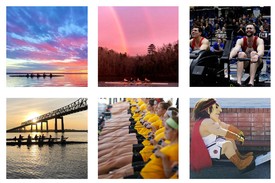 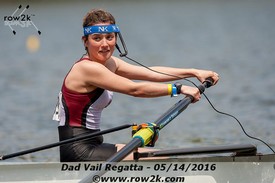 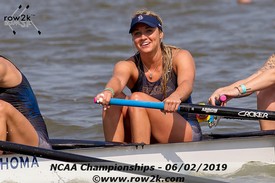