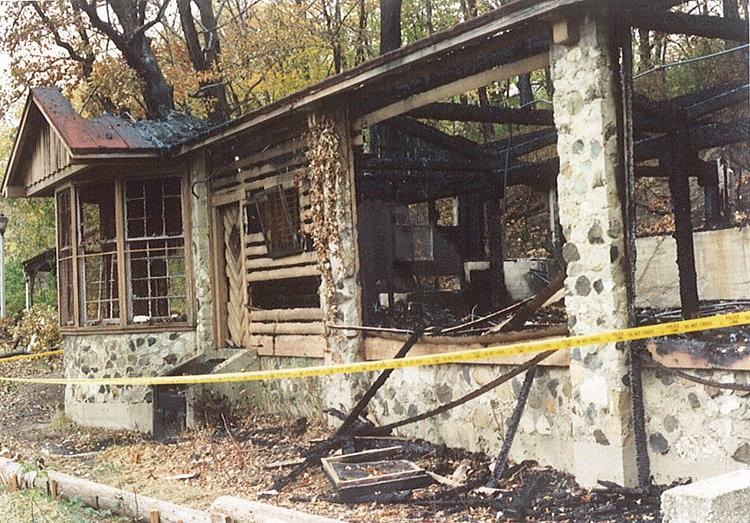 The Milwaukee Rowing Club (sometimes known as the MKE rowing club) has had a continuous existence since 1894, with lots of ups and downs. Currently it includes a thriving junior program with important community outreach and the Milwaukee School of Engineering Division III rowing teams. However, 30 years ago it may have had its most interesting season.

Its modern revival began in the early 80s. It had survived the fire loss of its 19th century boathouse near the North Avenue dam and moved upstream into the old Downer College boathouse in Hubbard Park. In 1985, Tim Mickelson arrived and brought his wealth of rowing knowledge. That year we went to the World Masters Games and FISA Masters regattas held back to back in Toronto; everyone who went came home with a medal. That fall we held a head race on the Milwaukee River from the North Avenue Dam to Hubbard Park.

Things got moving by 1988 when we won the men's open eight at the North West International Rowing Association (NWIRA) regatta in St. Paul. Tim had rounded up some ex-Wisco rowers, some with international experience, and the crew was rounded out with locals who enthusiastically adopted his "higher and harder" approach.

In 1989, we entered the men's varsity eight at the Midwest Rowing Championships held on Lake Wingra in Madison, WI. On race day, a howling tailwind churned the lake. Tim, at stroke, declared the race strategy: go like blazes in the calmer first 1k then lower the rating for the rollers in the rest. Wisco and Purdue were quickly out of reach in the lead, but the rest of the field fell further behind us every time Tim reduced the rating after the 1k mark. We got the 3d place medals, but had to survive taunts at the awards dock about being grizzled old men - we probably averaged 39-40.

In August, we set out for the NWIRA regatta at Ft Francis ON, just across the aptly named Rainy River from International Falls, MN. If you've never been there, just go to Duluth, turn North and keep going a long ways.

We entered a few small boats, but focused on the 1/4 mile eights dash and open eight, which we won. We were lucky to have a Wisco women's coxswain, Annie Capelli, who steered the rough Rainy River course perfectly and somehow instinctively sensed exactly what to say and when to say it, even though she was facing Tim at stroke who many have found an awesome (in the proper sense of the word) presence.

That regatta was NWIRA's 86th, and over the years an impressive set of silver cups had accumulated for event winners. They spend the year locked up and are brought out each regatta so the winners can have a picture. Our picture that year had two of the oldest and biggest cups. 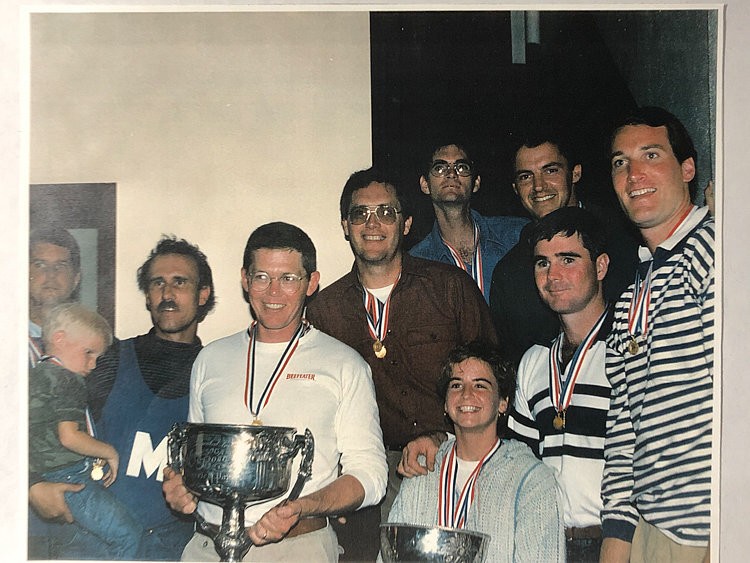 Back in Wisconsin in September, Tim and I had taken a double out for a row from his house on Lake Keesus when Tim's wife Beth waved to us from the shore. We both immediately thought "somebody must have died" for Beth to interrupt a row. In fact, the boathouse and every boat except the one we were rowing had burned the night before. 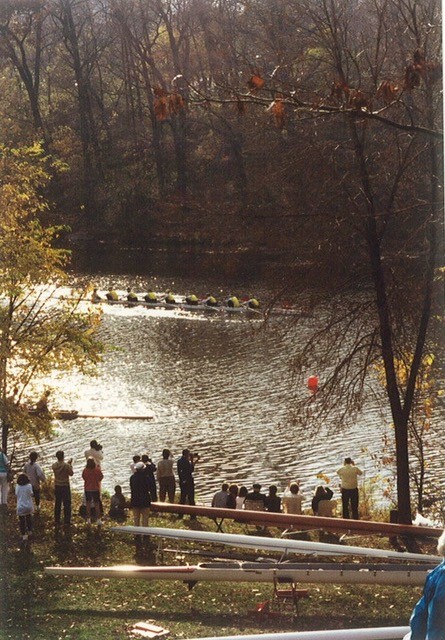 Lithuanian crew at the 1989 Head of the Milwaukee

The season didn't end on that low note. We held the Head of the Milwaukee at the end of October in Hubbard Park with special guests - a crew from Lithuania on a USA tour competing as a national crew for the first time in nearly 50 years. Wisco generously brought extra shells to loan the Lithuanians and the club members. As we launched for the last eights race of the day, the DJ played Talking Heads' Burning Down The House.

The boathouse was rebuilt in downtown Milwaukee, and has won a number of awards.

These events were never really picked up by the national media, perhaps because in November the Berlin Wall came down - but there are some of us who still recall.

The 2019 Milwaukee River Challenge, a three-mile head race on the Milwaukee and Menomonee rivers through downtown, will be held September 21.