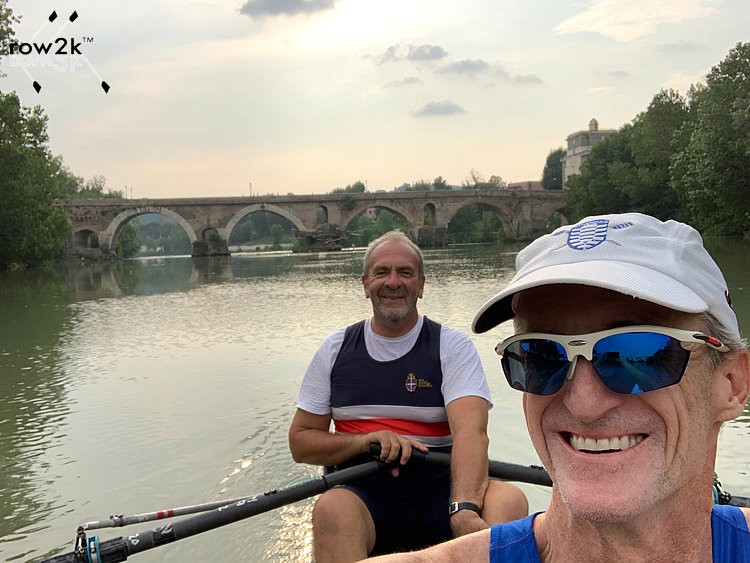 As I thought this trip out, I wasn't sure how the rowing part of it would go. When you're driving around with your own boat on your car, you can pretty much row anywhere. But asking a club to lend you one of their boats is a different story. So the fact that I'm batting .500 in getting on the water in two different foreign cities (Rome and Florence) isn't too bad.

Rome was absolutely fantastic, such a beautiful city. About a week prior to leaving, I Facebook-messaged Marco Bovo, who I've become friends with on Facebook but have never met in person. We worked at Community Rowing in Boston at the same time in 2013-2014 - I was a grant writer, he was a coach - but we didn't know each other then.

Say what you want about social media in general and Facebook in particular, but the many downsides and pitfalls are offset, at least in part, by the incredible social connections, friendships and reunions with old friends that the technology makes possible. Marco, who now coaches in D.C., got in touch with his cousin, Franco (also a Bovo), and hooked us up via WhatsApp. By the way, WhatsApp is THE way to communicate in Europe; it combines messages, phone and video chat and is Internet-based. It works great except for the video chat, which can be unstable.

The interesting part about my rowing with Franco is that he doesn't speak much English. But as we all know, rowing is the universal language. This complete stranger went out of his way to drive my hotel, take me to his rowing club, show me all around, take me out in a double, where we rowed to a famous 2,000-year-old bridge (the main route out of Ancient Rome to points north -i.e., Florence, Paris, etc.), have a drink in the swanky bar upstairs (it was like an American "country club"—they know how to do rowing clubs in Rome), and then drive me to meet my friends in Rome for dinner. This also included waiting out a massive thunder & lightning, cats & dogs rainstorm that delayed us over an hour from our scheduled time (he had his daughter call me on WhatsApp to translate the details of the rainstorm wait-out). And to top it off, he gave me a club tank top! Incredible. 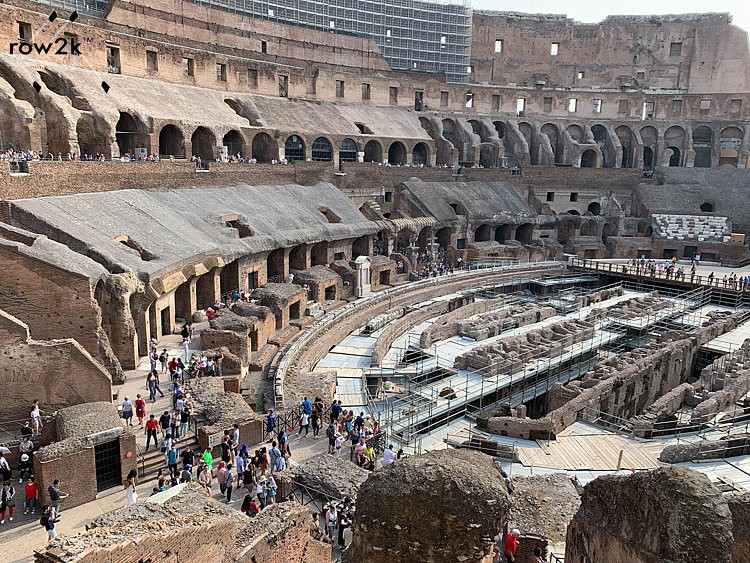 Inside the Coliseum - looking for Russell Crowe

My first full day in Rome started with a full tour of the Coliseum - no, that's not like a full tour of the Harvard stadium - as well as Palatine Hill, the center-most of the legendary seven hills of Rome and the site of its founding and of many imperial palaces, followed by a tour of the Forum. Most of the ruins in Rome are, well, ruined. After Constantine moved the empire headquarters to present-day Istanbul (he changed the name to Constantinople) in the early 300s, Rome got attacked many times by Goths and Huns until, in 410 AD, it was officially sacked by the Visigoths, led by King Alaric. The Goths, Huns and Visigoths were all nasty barbaric tribes from present-day Germany. Their descendants probably make for excellent rowers; and for all those who have teenagers who are into "Goth," now you know where it comes from. 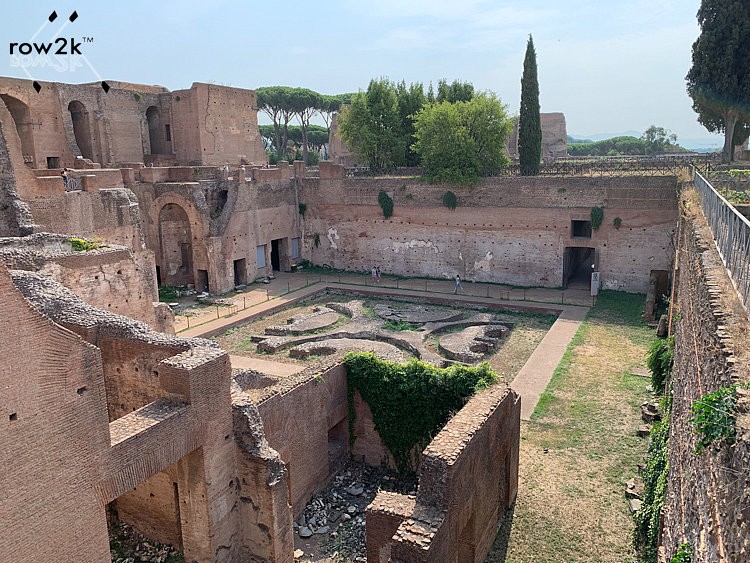 The Forum after the fall of Rome

After walking all over the Empire (I had also gone on a long walk the night before, after flying all night from Boston the night before that), I went back to the hotel to chill. Franco showed up in his VW and took me to his club, Reale Circolo Canottieri Tevere Romo. Rowing on the Tiber (pronounced "TEH'-ver-eh" in Italian) was awesome, but I'm still not sure why the water is green. In any case, I can now add Rome and the Tiber to places I've rowed. I had dinner with friends and didn't get back to my hotel until after 11:00 PM. I was WIPED. I was also all keyed up. Traveling can do that to you, especially if you do three major things on the first full day of your trip and kind of forget about the whole jet lag thing.

On day three, I had a relaxing morning in the hotel, followed by lunch with my friend Rebecca Reynolds, with whom I had dined the night before (along with her friends who she happened to be visiting the same weekend). We then caught a bus to Siena, where she lives. She is a college classmate who started her own consulting firm, and this past year she did what a lot of us dream of doing -downsized her life and moved to Italy. She continues to run her business from Siena and is also doing research for several books. She's rather Wonder Woman-ish. 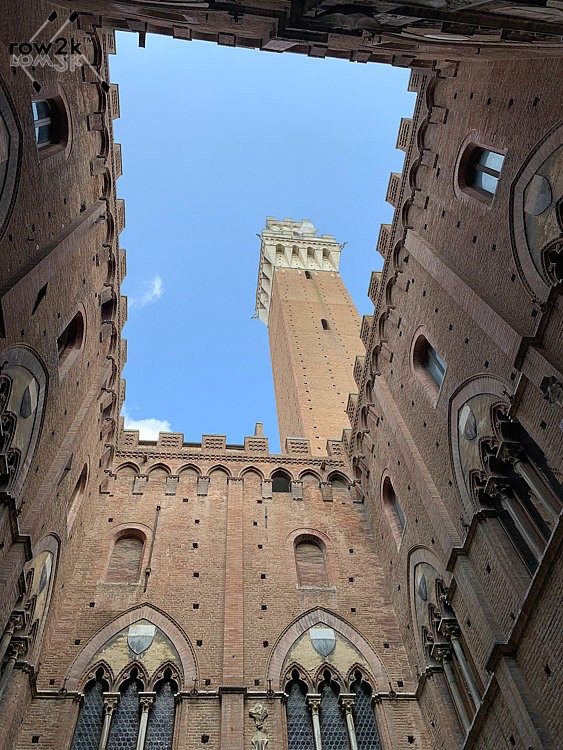 Rebecca took me on a personal tour of the city, which, despite the fact that there's no rowing, is one of the coolest places I've ever seen. Everything is at least 1,000 years old and is perfectly preserved. The city sits on top of a big hill and is the capital of Tuscany. There's also a millennia-old rivalry between Siena and Florence, which I found fascinating. After getting their asses kicked for many hundreds of years by the Sienese (people from Siena, pronounced "sin-ay'-ze'"), the Florentines, backed by the Spanish and financed by the Medici family (bankers to the Pope, that doesn't hurt), defeated the Sienese, backed by the French, at the Battle of Marciano in the mid-1500s. The Florentines had wanted to get control of Siena for centuries, and the Spanish and French were at each other's throats as well, so the battle helped settle some old scores and create many new ones - pretty much the history of Europe. So there are Medici crests all over the city, and I don't think the Sienese are too thrilled about them. Rivalries die hard in Europe, just like in rowing. The tour was incredible, and it was on to Florence.

Unlike Siena, which is clean, small, gorgeous, and very peaceful, Florence was kind of like a smaller version of Rome, only with a lot more tourists per square foot due to its distinction as the birthplace of the Renaissance. Packed and crazy busy but incredibly beautiful. I arrived on the afternoon of Day 4, and was beginning to feel like I was living the corny old 1960s movie, "If it's Tuesday, this must be Belgium." 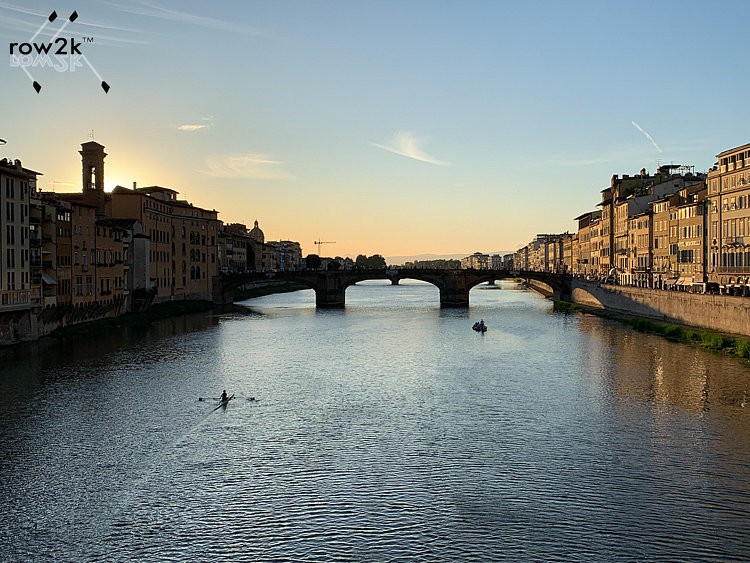 I had the goal of trying to row on the Arno under the infamous Ponte De Vecchio bridge, so I wasted no time in going for a lovely evening walk to the river. On the way I passed the Medici Palazzo, Brunelleschi's massive Santa Maria del Fiore (the "Duomo"), the octagonal Baptistery of Saint John, the Palazzo de Vecchio, and the Uffizi museum. WOW. That was some walk. 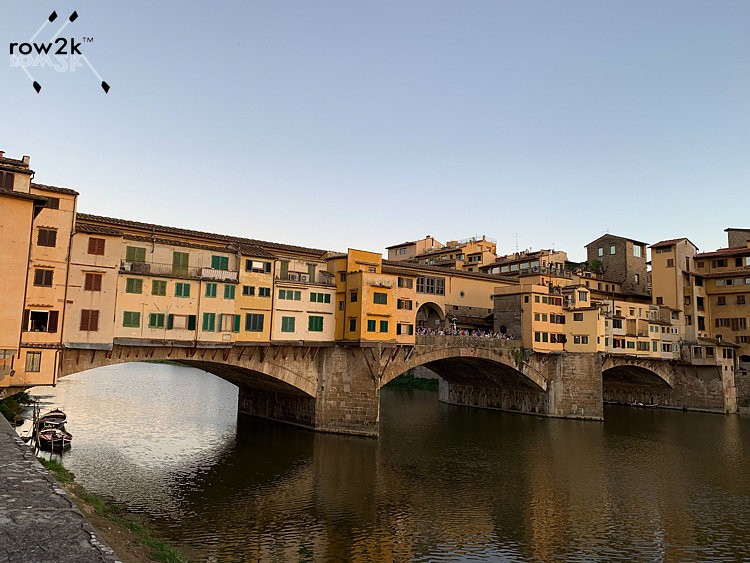 Then I got to the bridge. It's said that the Nazis refused to bomb it in World War II because it was too beautiful. And just as people had told me, there were rowers plying the waters. I knew there was a club nearby, so I followed them and saw where they docked. Funny thing, though, the club is built at the bottom of the cliff, and the doors seemed literally to go into a huge underground tunnel. That was the club? Sure enough. 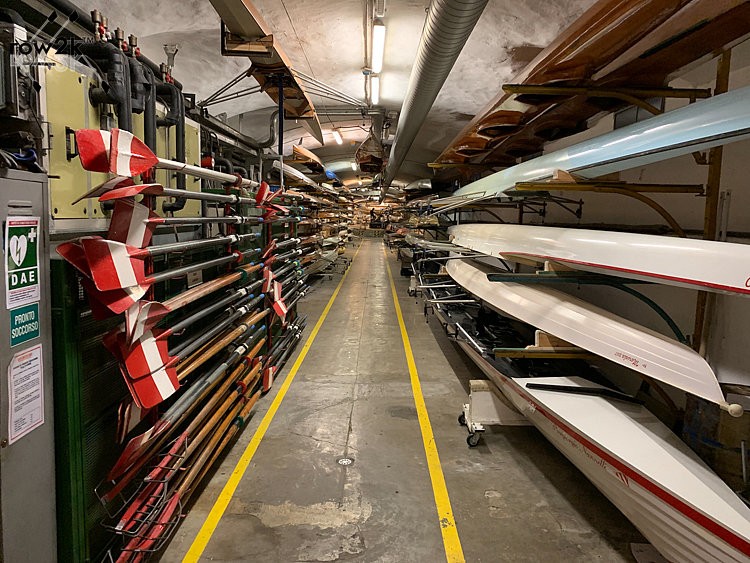 The Firenze boathouse is more of a boat tunnel

You enter from a small green door on the street, walk down some stairs, and the entire thing is underground. I heard that the Medicis used it as their horse stables, and that it's also the basement of the Palazzo de Vecchio. In any case, it was incredibly cool. 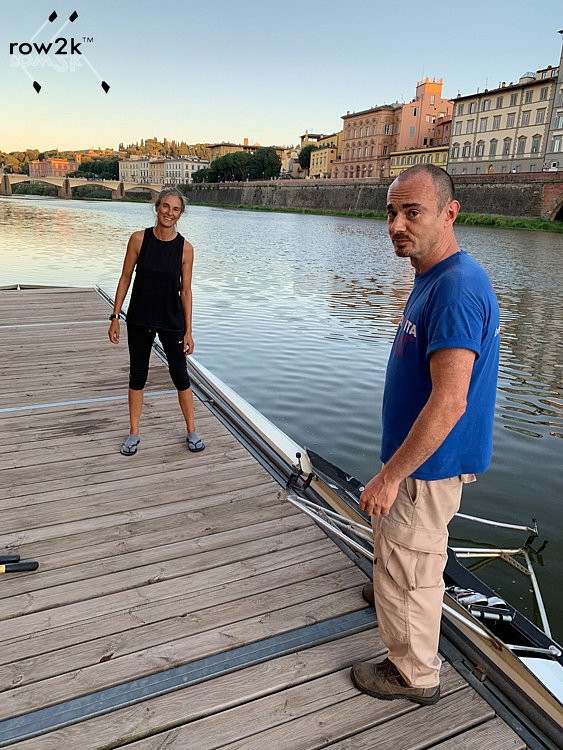 I got a personal tour from Claudio, who is kind of the general manager of the club, met another sculler named Steffi, and was generally awe-struck by the whole thing. Claudio seemed to indicate, in broken English, that I could come back the next day to row. Unfortunately my next day was pretty full, and I had also kind of misunderstood him - it seemed like rowing there would be a simple matter of showing up in my rowing clothes (especially since I felt like I had "checked in" the night before), so I didn't make it until the latter part of the afternoon, at which time I was told I needed permission from the board of directors.

I could have rowed the next day, but I had planned to see the infamous Uffizi art museum (with some of the most famous paintings in the world) and had to catch an afternoon train to Trieste, which would serve as an overnight way station on the way to Lake Bled, Slovenia. So... next time. C'est la vie. I had toured the club and met some wonderful people, and it was truly magnificent. I have another good reason to return. 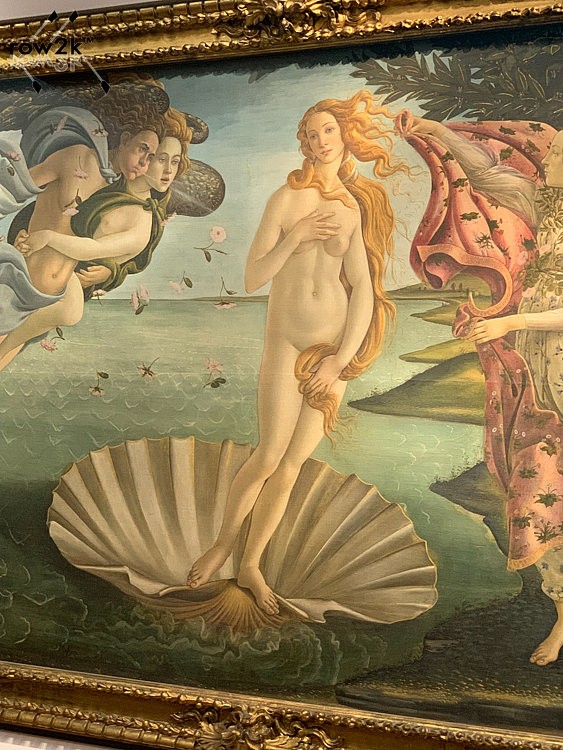 Botticelli's Venus on the Half Shell
Rowing Features 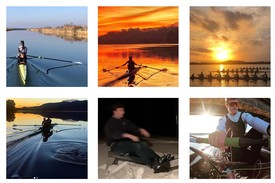