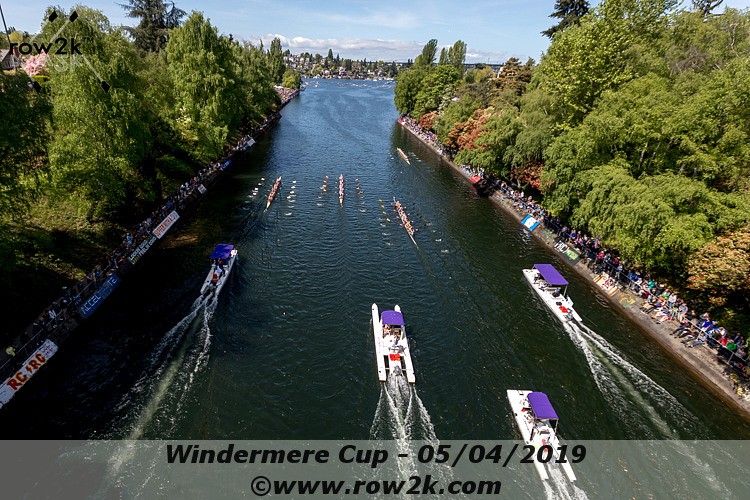 DIVISION 1 ROWING As the regular season winds down and final exams approach for most schools, navigating the next two weeks will be critical as conference championship are looming large. However, this past weekend, we saw the top eight programs all in action with a few other ranked schools fighting for position for the At-Large bids. More on that later.

Washington #1 – Windermere Cup
Hosting the 33rd annual Windermere Cup, the Huskies won the V8 event by 5 seconds over the visiting German crew, with Washington's 2V another 5 seats off the Germans. The UCLA Bruins were 3/4 length off the Huskies 2V8. In the V4 event, Washington may have been doing a little seat-racing as Washington B beat Washington A by 9 seconds with UCLA third and Western Washington fourth. On the night before, the crews racing in the Windermere events, raced the inaugural "Montlake Night Sprints" covering 600 meters.

Stanford #2, California #3
For the second weekend in a row, the Cal Bears faced off another top-two team, this time with Stanford at the Redwood Shores. In the V8, Cal won what was a tight race till 500 meters to go when Bears finished five seconds ahead of the Cardinal given the Golden Bears an undefeated season in the V8. Looking back at the results from the San Diego Crew Classic, the first weekend in April, the margins were quite similar as Cal finished 6.5 seconds ahead of Stanford.

In the 2V8, it was Stanford winning by 3.2 seconds over Cal (the margin at the Crew Classic was 5 seconds). In the tightest race of the day, the Cardinal won by 2.8 seconds where four weeks ago the margin was 5 seconds. It should be noted this race was held in Honor of the Late Jill Costello and in support of cancer research.

Texas #4, Ohio St #6
Two programs who are always near the top for highest training volumes moved the races to Friday evening with flooding conditions being predicted for the next morning in Columbus. Despite the change in times, both schools had their teams ready to race and put on a good show. However, with the tight racing it was the Longhorns that had the edge, winning all the races on Griggs Reservoir. The V8 was 5 second margin, with both crews breaking 6 minutes for the race in the tail current. The 2V8 race, Texas won by 3/4 of a length, while the V4 was less than a 2 second margin. Somehow, I think these crews will be finding each other again at the NCAA's in four weeks.

Michigan #5, Louisville, Michigan St
Michigan played host to Louisville and Michigan St as the Wolverines celebrated senior day as crews took to racing on Belleville Lake. After being off last weekend, Michigan were ready to race, winning the V8 by 13.7 seconds over the Spartans, with the Cardinals another six seconds back. In the 2V8, Michigan continued to flex their muscle with another double-digit margin over the field, but this time it was Louisville taking second a length ahead of Michigan St. The V4 continued the trend by winning by 14 seconds, and in a tight race for second, it was the Cardinals by a half a length ahead at the line.

Princeton #7, Syracuse #20
Princeton hosted Syracuse on Carnegie Lake in good conditions as these two teams took to the water. Syracuse, who tend to find their speed later in the season, made it a competitive day but it was the Tigers who was the faster "orange" team of the day. In the V8, it was Princeton who took the early lead and held a length for a good portion of the race before getting open water in the last 500 meters win with a 5.8 second victory. In the 2V8, Princeton lead the whole way but had to fend off Syracuse who made a few runs to draw level. Princeton was able to counter each move winning by 3.4 seconds. The Tigers took the V4 as well winning by 10.6 seconds over the Orange of New York. 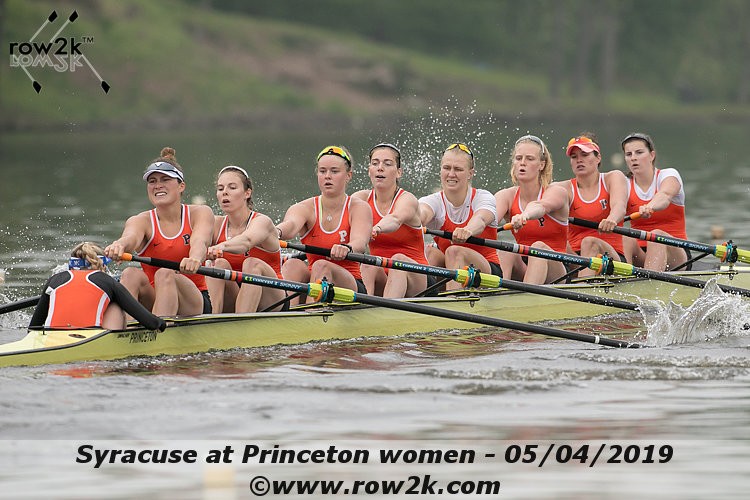 Brown #8, Cornell
Brown, racing in their season final before the Ivy League Championships, found themselves up one spot in the rankings as they took on the Big Red of Cornell. Competing for the Dunn Bowl, it was Brown winning all the events by double-digit margins over Cornell with the V8 posting a 16-second victory. Cornell's 2V8 had the best race for Big red racing the closest margin to Brown. Both schools will meet again at the Ivy League Championships in two weeks.

In the morning heats, the Scarlet Knights wasted no time setting the tone with the fastest time in the V8, the 2V8 and the V4. Harvard-Radcliffe won their respective heats in the V8 and 2V8, with their V4 coming in second to qualify for the A Finals. In the other V8 heat it was Drexel beating URI by a half of a length as both crews moved to the A Finals where Columbia and Northeastern rounded out the Grand Finals.

In the 2V8 heats, it was Northeastern taking the other heat, 2.5 seconds ahead of Tennessee, while Temple and Dartmouth rounded out the field for the afternoon finals. Columbia won their heat for the V4 along with Dartmouth winning their heat as well. Temple also advanced easily to the Grands while the Volunteers had a tight race the whole way down and edged out URI to grab a spot in the A Finals. 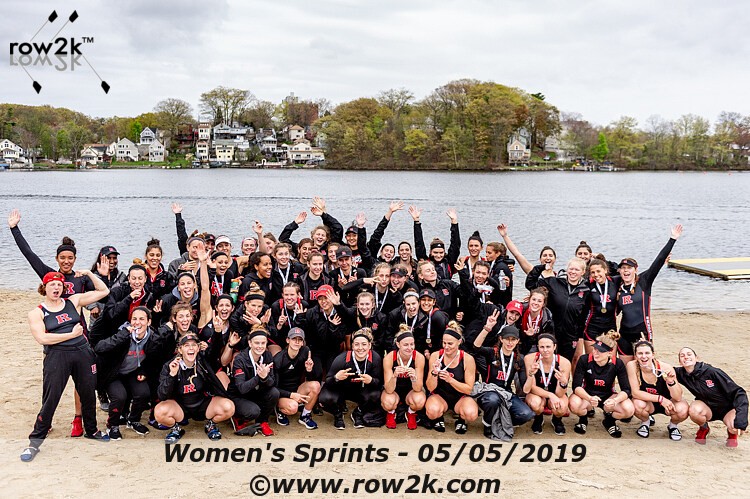 For the afternoon racing, it was Rutgers who took home the top prize by winning the V8 event by a length over Harvard. Then it was open water back to Columbia, URI, Drexel and Northeastern. The 2V8 race saw Harvard-Radcliffe beat out Rutgers by a touch of open water with Northeastern for third followed by Temple, Tennessee and Dartmouth. Rutgers wasn't done taking the top spot as they won the V4 by open water over three Ivy League schools, Dartmouth, Columbia, and Harvard-Radcliffe. Tennessee was a close fifth with Temple over-lapping the Vols finishing sixth. Look for the Scarlet Knights to move ahead of Harvard-Radcliffe in the rankings.

Sunflower Showdown – Kansas, Kansas State
In the battle of these two schools, it was Kansas State making a clean sweep of the day, but the V8 race was the tightest race of the day (the way it should be). The Wildcats and the Jayhawks fought all the way down the course before Kansas State won by two-seats, taking the Sunflower Showdown for the second year in a row. Both schools will see each other again in two weeks at the Big 12 Championship.

Lehigh, Delaware
Lehigh hosted the Blue Hens of Delaware on Lake Nockamixon in Quakertown, PA and it was the Engineers who had the advantage all day, winning the V8 and 2V8 by open water. In the V4 it was a close race with Lehigh racing two Delaware crews. Lehigh won by a half length with Delaware B squeaking by Delaware A by two-seats. Those darn Killer B's.

My Fast Five
No changes to My Fast Five this week as the results don't warrant any changes even though I expect some changes after the conference championship.

NEXT WEEK'S RACES TO WATCH
-Only top-twenty school in action this coming weekend is: USC vs UCLA 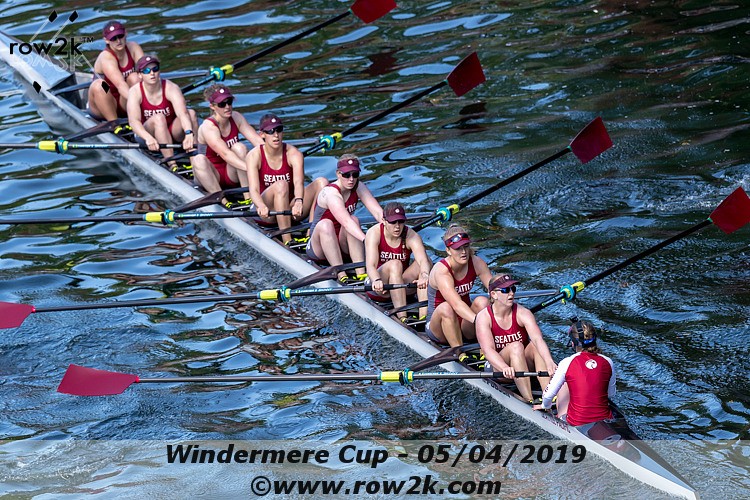 Western Washington #4 – Seattle Pacific #5 @ Windermere Cup
Both D2 schools V8’s mixed in with Washington and UCLA lower boats and did a good job staying competitive with the D1 schools before fading back. That didn’t mean there was a hotly contested race between Western Washington and Seattle Pacific. Staying in contact with each other the whole way down, it was Seattle Pacific who beat out the higher ranked school in Western Washington by 3 seconds. Looking at the results, it seems the two schools enter different races from there, not matching up in any other events. Both schools are still in good shape for making the NCAA’s as the west region looks to be sending all three At-Large bids at this point.

NCAA Automatic Qualifier Race
Liberty League Championships
Last season, Ithaca joined the Liberty League and crashed the party by winning the Championship. This season as reigning champs delivered a second title in two years by winning both top-eight events and winning the Automatic Qualifier for the 2019 NCAA Championships. In the V8, Ithaca outdistanced William Smith by one length, with St. Lawrence finishing third. It was RIT who was able to hold Ithaca within a length to finish second, with St Lawrence taking third again.

NCAA Automatic Qualifier Race
New England Rowing Championships
This event is a little different than most AQs, as only some of the schools are eligible for the Automatic Qualifier spot amongst the 18 schools that raced this past weekend. The only thing that you need to know is Bates is that fourth and final AQ school, as they won the V8 over WPI by open water. Bates, who came into the weekend ranked behind WPI, was able to send a message that Bates is ready to go win another NCAA title. The 2V8 saw Bates win by two lengths over Williams, showing the depth of the program as well. Next weekend, the top 9 ranked schools will meet back at Lake Quinsigamond as the four At-Large spots will be on the line. That basically means Wellesley, Wesleyan, Smith, Hamilton, Williams and Williams Smith will be battling for those four spots. 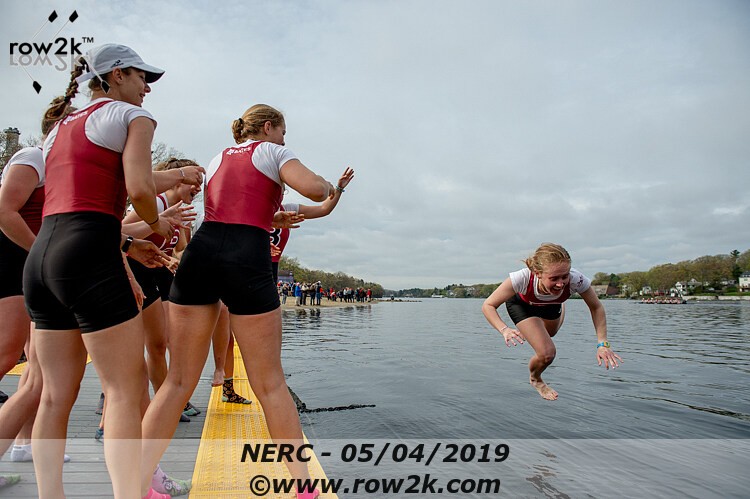 New York State Collegiate Championships
Ithaca, having won the AQ the day before, was looking for more competition as Marist (DI) made the trip to Saratoga Sprints. The V8 was quite competitive as Marist took the top spot beating out Ithaca by seven-seats, and Hamilton College finishing third, less than a length behind Ithaca. The 2V8 was another close race between Marist and Ithaca as the Foxes of Marist held off Bombers again with Hamilton also repeating third place.

Eastern Sprints –Princeton #2, BU #3, Harvard-Radcliffe #4, Wisconsin #5, Georgetown #6
Ranked teams #2 through # 6 got together at the Women’s Eastern Sprints to test their speed before Stanford joins the party at the IRA's in June.

The V8 race was a nip-and-tuck type race between Princeton and BU, with the Tigers beating the Terriers by five seats. Harvard-Radcliffe, Wisconsin and Georgetown closed out the field, which match the team’s rankings for the week. The V4 was a different story, with BU taking the top spot with Wisconsin second and Harvard-Radcliffe third. In the one sculling doubles event, BU was first open water ahead of Georgetown. The fight for third came down to the final stroke with Princeton edging out Wisconsin by 0.15 seconds, which is probably faster than the finish flag can go down and back up. 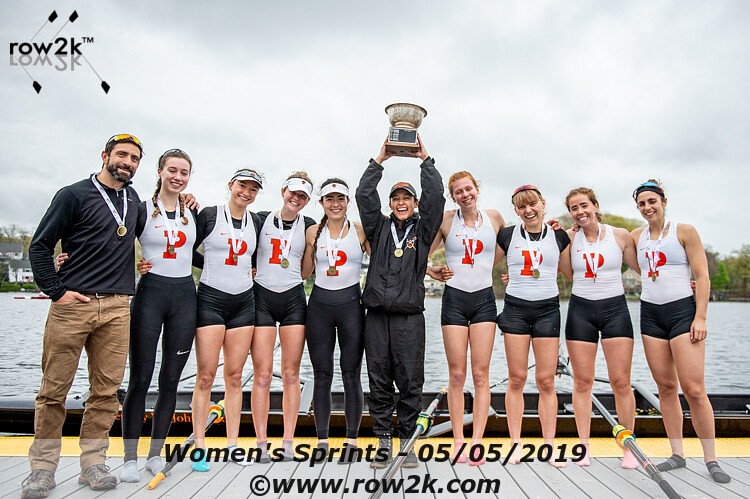 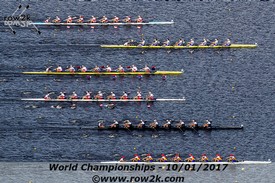 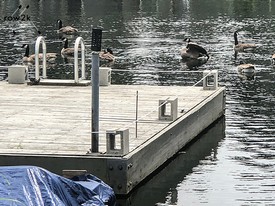 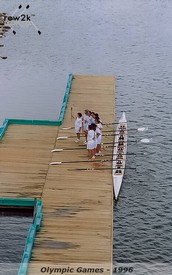 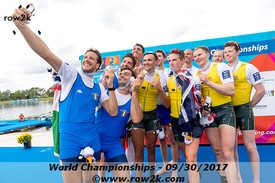