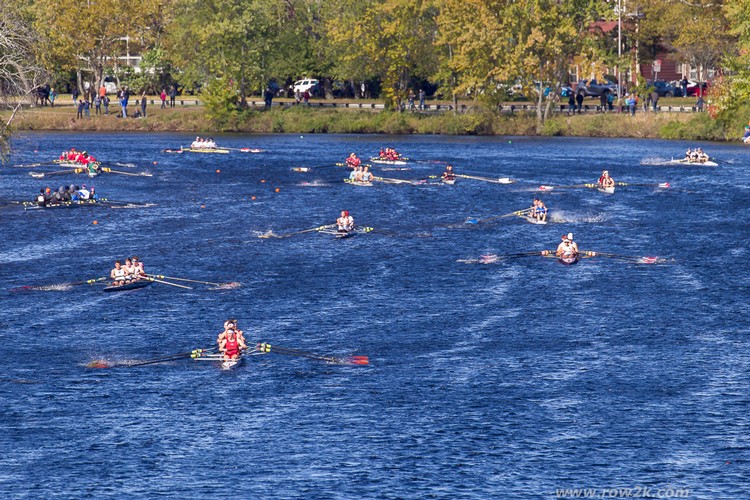 We all know that headwinds on race day will mean longer races, technically challenging conditions, and increased effort – and that big headwinds can bring on a mental state approaching terror, whew.

It turns out that the fear of headwinds can do almost as much damage to your speed as the headwind itself.

In a study conducted by sports psychologists at Ulster University in Northern Ireland, researchers determined that "anticipated increase in task difficulty provoked pace conservation" in runners on treadmills approximating a 3k running course. Two groups of runners were tested on a zero-gradient (i.e., flat) treadmill effort to obtain baseline speed, and then the researchers relied on deception for the next part of the test.

The first group was given another 3k time trial, but were told that the last 800 meters would be on a 7% gradient to approximate an uphill finish to the course. They ran the course and times were taken.

The second group was also given another 3k time trial, but were told it would be on a zero-gradient course again – that is, another flat course. Then, in a twist that many folks who write training schedules will appreciate for its grace, clarity, and deviousness, that group was subjected to the same course as the first group, with the 7% gradient (hill) in the last 800 meters.

You see where this is going – in the second round of time trials, the first group (the group that was tipped off to the uphill gradient) posted relatively slower times in the first, flat 2200 meters than did the second group – that is, anticipated increase in task difficulty provoked pace conservation per the title of the study Anticipated Task Difficulty Provokes Pace Conservation and Slower Running Performance.

Simply put, knowing a course was going to be hard caused the runners to go slower than not knowing.

The researchers also observed a bunch of psychological effects as well, in that pacing in the first group was considerably affected by "pre-trial motivation, pre-trial vigor, perceived effort, and affective valence," while the second group showed no similar correlation.

And it is not only psychological affects - the heart rates of both groups were nearly identical on the second test – that is, the second group had no higher heart rates than the first group, even though they were going faster.

So what happened when the second know-nothing group was ambushed by the increased gradient? And isn't it possible to go out too fast if the last quarter of a race is going to have different, more difficult conditions than expected?

Lead researcher Dr. Noel Brick shared some conclusions and thoughts with row2k by email this week.

row2k: What might explain the similarities in HR and perceived effort given the real differences in pacing?

row2k: What happened when the UI group was ambushed by the increased gradient?

Brick: The most interesting thing here were the strategies participants used to cope with the unexpected incline. Participants used much more motivational self-talk, repeating statements like "I can do this" or "I've done this before, I can do it again" to complete the 800m incline. We know that motivational self-talk can have a positive effect on endurance performance and is especially important when task difficulty increases. So this was a useful mental strategy for participants to allow them cope with the unexpected increase in treadmill gradient.

This is something that takes practice, however. Our runners had, on average, over 9 years of running experience. So it is likely they had experienced difficult challenges in their running career before this, and those experiences helped them in our study.

row2k: this is somewhat dependent on the answer to the question above, but isn't it possible to start too fast if the last quarter of a race is going to have different, more difficult conditions than expected?

Brick: Yes. And so the most important learning point for me from this study is that an important part of race preparation is familiarisation with a race route. Get to know what challenges it contains. Train on it, or on a similar route, if possible. This will help to reduce uncertainty about the event and the route and, most importantly, allow you to pace the route appropriately.

So next time race day approaches and you find yourself obsessively checking wind direction and speed even before getting out of bed, maybe put away your phone, get in the boat, and charge down the course until the headwind takes you out – instead of letting your head do the damage beforehand.