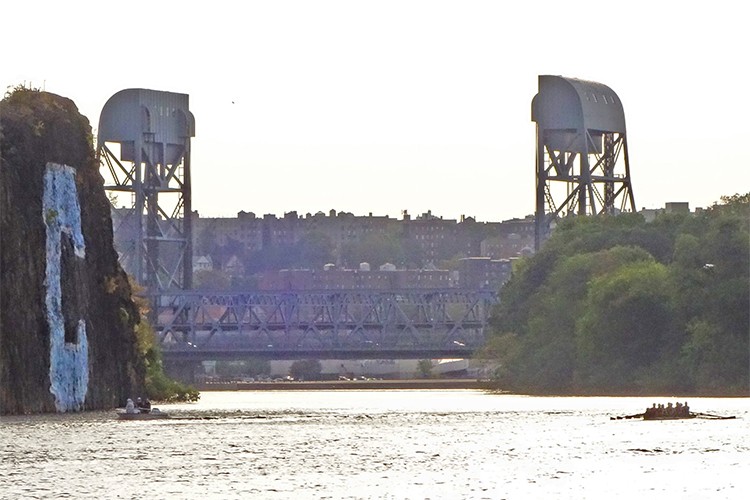 "TAKE IT DOWN!" I shouted at Peter, in between breaths that felt more like convulsions.

We'd come off the line at a 42 and settled (if you wanted to call it that) to a 38. We were out ahead of Columbia by a length, but it wasn't pretty. And - at least according to the sound of my lungs - it wasn't sustainable. Our beautiful Schoenbrod was checking badly between strokes, and every time I came up to the catch, I could see Heidi getting jerked around like a bobblehead in the stern.

We were rowing scared - not entirely a surprise after our unsettling warm-up on the Harlem River. Nearly as soon as we'd put our boat into the brown waters of the Spuyten Duyvil, our urban rowing odyssey began. The little creek connected the Harlem to the mighty Hudson, and further downstream, where we headed to get to the starting line, the eight-mile channel connected with the tidal estuary of the East River.

Tidal means tides, and tides means current. We were used to dealing with current on the Connecticut River, of course, but not the big tidal fluctuations caused by the ocean.

Fourteen bridges line the Harlem, which is bounded on either side by rock walls, old buildings, and the Hudson railway line. In the 1970's, it was also littered with trash of every shape and form imaginable. Since the 1700s, people had been using the river for shipping and waste disposal, which severely affected its water quality.

A half-mile after we shoved off from the Columbia boathouse, we entered a straight stretch of water, boxed in by high seawalls. Coaching launches shot by us, throwing up massive wakes, which then bounced off these walls and made the river a virtual washbox. As we stopped to let the turbulence subside, we took a rough inventory of all the flotsam and jetsam in the river, which included old tires and huge pieces of driftwood. Heidi eyed these obstacles warily, and then noticed a bunch of street kids hanging out next to the rail line, looking down at us with interest.

"Aw, look at those cute kids," Heidi said, and waved.

A few of them waved back. Then they started to pelt us with rocks. Most of the sharp stones landed harmlessly in the water, but one managed to hit our fiberglass hull, making a loud "thwack."

"Start rowing - GO!" Heidi shouted, losing her composure and the formality of rowing commands. After 20 hard strokes, we seemed to be in the clear and stopped again to practice our racing starts, but from that moment on, none of us kept our eyes in the boat.

"Did you hear the story about the Harvard crew that rowed here a few years back?" Peter asked.

"Well, rumor has it they don't come here anymore because of what happened."

"Well, rumor has it that a cinderblock was dropped off one of these bridges and it smashed right through the wooden hull, barely missing an oarsman's legs."

"Ok, great. Did you really have to tell me that?" Heidi said.

Peter laughed. He was from Philly after all, which had its own history of class warfare between the haves and the have-nots.

Rock-throwing aside, we were feeling pretty pleased with ourselves after beating Coast Guard the previous week, especially since we'd been the only Trinity crew to win that day. But Columbia was part of the Ivy League, and that put them in a slightly different category. Their program had existed since 1895, and even though the Harlem River was clearly due for a makeover, Columbia still had the aura of a rowing dynasty. I'd taken a quick peek at the old photos in the Gould-Remmer Boathouse, which showcased impressive crews dating back for decades.

Normally, one of the benefits of rowing at an established regatta, hosted by an established crew program, is that things tend to go smoothly. After all, these folks have done it all before and worked out all the kinks that might otherwise bedevil a boat race. Whether the Harlem River was cursed or we simply came on a bad day was impossible to say, but all sorts of things started to go wrong. And just like at Coast Guard, both our varsity heavyweight and lightweight crews narrowly lost their races, and our freshman heavies trailed by a full length. Now it was once again up to us.

Because of the strong current and the lack of stake boats, many of the races started well after the starting line, which lay just beyond the Alexander Hamilton Bridge, over which I-95 passes on the east side of Manhattan. A floating start, where the boats are lined up fairly, is hard enough to execute in still water, but with a 5-knot current, it becomes nearly impossible. We false-started once and had to row back under the bridge. Then the race official couldn't seem to get the boats lined up, and we drifted back beyond the bridge.

Exasperated, the umpire finally called out to Heidi that he would execute a count-down start, which we had never practiced before.

Off we went, with the current behind us, tearing our blades through the filthy brown water. I screamed at Peter to settle down, just before I began to hyperventilate. I tried to relax and establish a rhythm, but had the distinct feeling that something bad was about to happen.

Suddenly I heard a "kerplunk" nearby, like a fish jumping out of the water. Then I heard something go whizzing over our heads.

"What the hell was that?" Heidi screamed.

Sure enough, not far from the spot where we'd first noticed them, the gang of local kids was lined up like a firing squad, pelting us with rocks. For them, it was probably the highlight of their weekend, taking pot shots at a bunch of wealthy college brats. I'd actually been raised in a few neighborhoods where rock fights were not uncommon, so I knew that what was happening wasn't personal. We were on their turf; they were simply defending it.

Needless to say, our stroke rating didn't ever settle down and we sprinted the entire way down the narrow course, beating Columbia by a length. Despite the victory, it didn't feel like a well-rowed, clean race, and when we took our boat out of the water, it was covered in black slime. Because of that, we decided not to throw Heidi in. Coach Poole borrowed some solvent and rags from the Columbia boatman, and we scrubbed the hull until it was white again.

Unbelievably, our old coxswain, Phillip Poupee, suddenly appeared on the dock, standing arm in arm with his new girlfriend. He was smartly dressed in a black pea coat and Greek fisherman's cap, looking quite smug.

"Phil - what the hell are you doing here?" I asked. "I thought you hated rowing."

"I do," he said. "But I live in Manhattan and I'm spending the weekend at my parents' house. Lindsay and I thought we'd take in the races."

Everyone else on the team ignored him as we continued to wipe down our boat. After all, he'd quit the team last fall under less than ideal circumstances, and in crew that never sits well.

"I see all you could get was a girl to replace me," Phil said. His girlfriend giggled and Heidi bit her tongue.

"You know, there's something that I always wanted to do when you were our coxswain," Dak said.

As if on command, we all dropped our kerosene rags and grabbed him. Pea coat and all, we carried him over to the river and threw him into the dirty waters of Spuyten Duyvil.

"You b-bastards!" he screamed, when he finally bobbed to the surface. His black curls were now plastered to his head, and he looked like a river rat.

His girlfriend giggled and our victory was complete. 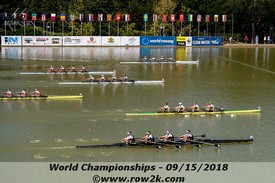