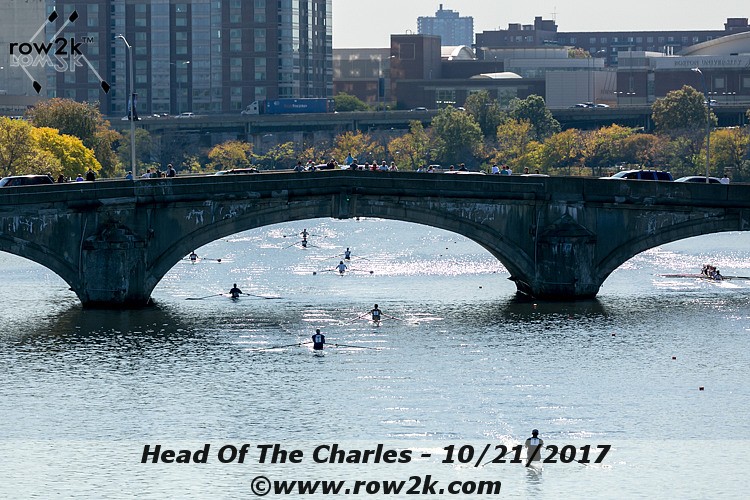 There are lots and lots of factors that determine how fast a crew will be; conditioning, technique, and equipment to think of a few. That said, there is strong sentiment that the ability to generate power degrades with age. As a result, most masters events are either conducted in age groups or with handicaps for age. For sprint type racing, the handicaps are well accepted, and; although we won't review them here, are essentially fair. Head race handicaps, not so much, we see different standards at different regattas. In an attempt to drive to a fair standard for masters head race handicaps, I submit the analysis below, based on data for male masters rowers. Fair warning, the results were not what I expected going in. I expected that taking the sprint handicaps times the distance was excessive, but didn't think it was as bad as I discovered.

For this analysis three data sources and one anecdote were used

The heavy analytical lifting was done using a data file with every 5000 meter score reported on the concept 2 "Rankings" page for ranking year 2014. This is a great data set because it is a large sample that covers the entire age range under consideration. Also, even though ergs don't float, they don't have headwind either. Seriously, this is a huge sample with each athlete rowing in essentially identical conditions.

The one cry I heard, even before I was finished with the math, is that the C2 scores include a bunch of gym types, who are not really athletes; or for that matter, who don't actually row. To answer this potential criticism, I ran the same analysis that I did on the big data set against the fastest ten times for each age. Ten 27 year olds, ten 28 year olds etc...) The members of this group are all reasonably fit, and may represent the actual degradation in physiological capability with age.

Ergs don't float, but single sculls do, the last data set is the results of several age groups in the 2013 Head of the Charles. I chose the Charles for several reasons. It is a big event and therefore has a big sample size. Almost everyone who gets into the race takes it fairly seriously, in terms of preparation, so the obviously missing factor of how hard people train is mitigated a bit.

Finally, we all love a good story, and I have included an interesting set of facts about the Schuylkill Navy Regatta and the Head of the Schuylkill, which reveals that Philly rowers may be a lot of things, but they aren't dumb.

Ok, I didn't believe this either at first, but the math doesn't lie

This suggests a potential age adjustment of .27 seconds per year. But the .2749 is not even close to being significantly different from zero. For the statisticians in the room, R-Sq is 0.0% 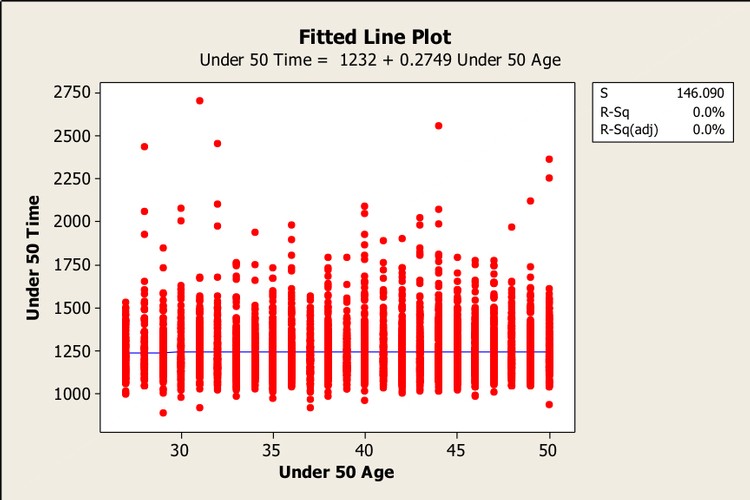 Ok. So this is a bunch of gym rats and non-competitive rowers. The next look is at the ten fastest scores by age from the C2 data. Same analysis, linear regression, same results, 0.25 seconds per year, and the picture is just as flat.

So the top performers are not slowing down with age either. 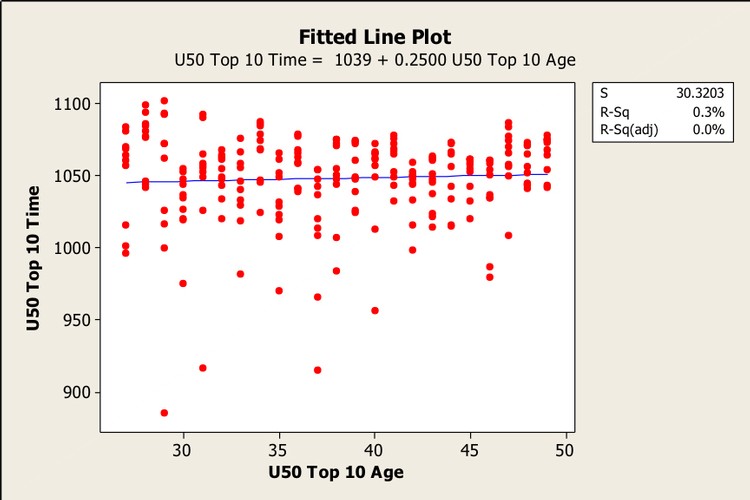 You can see that the three times under 950 seconds (1:35 pace) are all under 40, but exclusive of those three individuals, the fastest times for the fastest individual in each age are flat.

Since ergs don't float, it makes some sense to look to on the water results. As mentioned above the Head of the Charles presents an opportunity to compare results for a reasonably large sample of reasonably conditioned athletes. Here again, a linear analysis of the 40- 49 age group for the 2012 Head of the Charles (2012 chosen because the ages are shown in the online results). While the analysis suggests a whopping .9 seconds per year of handicap, of course, the .9 is not statistically significantly different from zero. 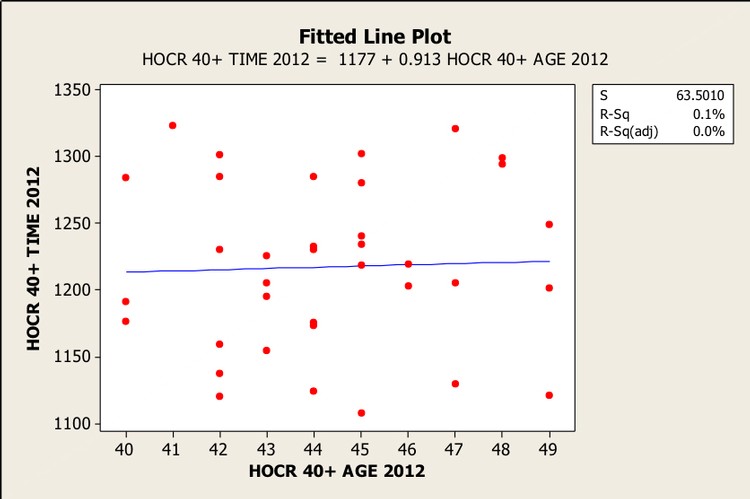 Finally, an anecdote that I think is interesting. Every year there are two head races on the Schuylkill in Philadelphia. The Head of the Schuylkill, and the Navy Day Regatta, presented by St. Josephs, in honor of the US Navy and not to be confused with the Schuylkill Navy Regatta, presented by the Schuylkill Navy in the spring. Ok, the Head of the Schuylkill uses age groups and no handicaps. This year the HOS had 19 singles in the 40-49 age group and 22 in the 50-59 age group. The Navy Day Regatta combines C and D age categories, (so the age group ends up being 42 - 54) and uses the US Rowing handicaps times 4. The youngest athlete to compete in the 42 - 54 age group was 49! I can't help but think that this suggests that the athletes are aware, at some level, that the handicaps make it a tough place to play for the under 48 crowd.

There is a lot of evidence here that suggests that zero is the right handicap for head racers under 50. This may be a tough sell to some athletes who are used to winning based on their handicap, and are correct in the notion that in sprint racing age handicaps are clearly appropriate.

On the other hand, something happens at age 50, and it's not pretty. Here are the top ten 5000 erg scores for each year of age from 27 to 65. It is pretty clear that something happens and times begin getting slower pretty abruptly at 50. 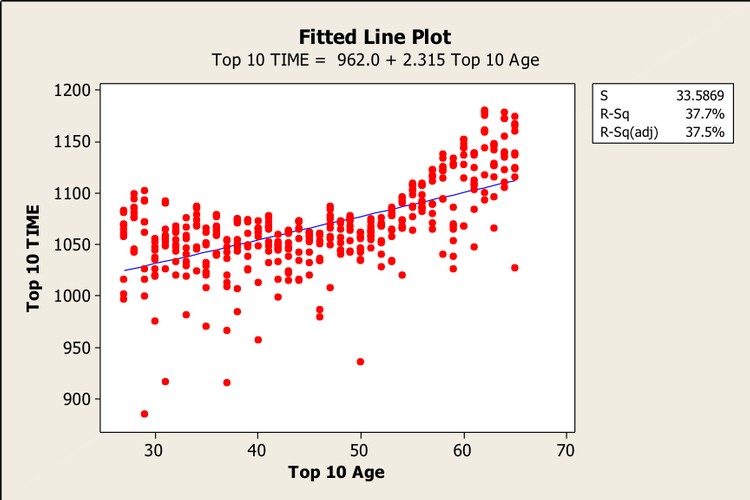 Using the same methodology as above, the best fitted line for 5000 meter times for athletes over 50:

In this case, all terms are statistically significant, so we will keep them in the model 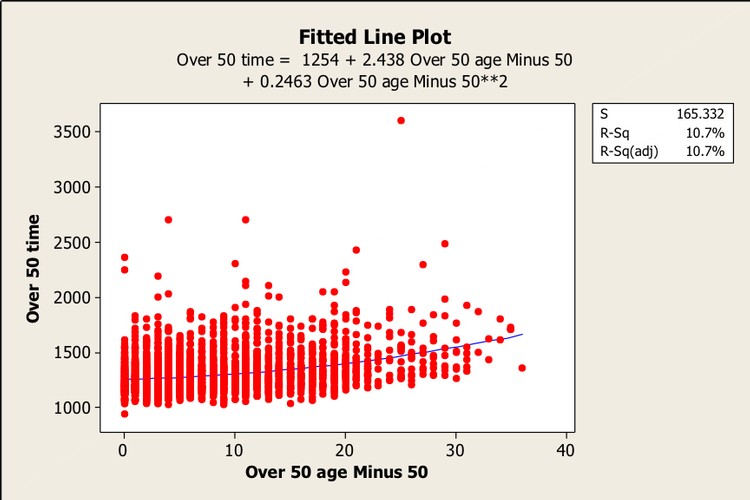 Unfortunately, this formula is kind of kludgy to work with. But if we can match fitted values form these results to a multiple of the current handicaps, we may have a usable solution. 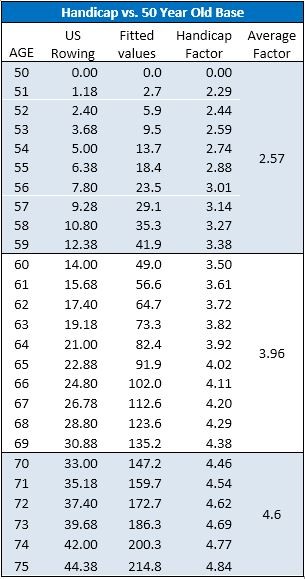 For simple ease of use and based on the table above, I would suggest that handicaps be applied according to the table below.

This is a pretty different picture than what we see at most regattas today, but the data is pretty powerful in what it tells us. I am sure that everyone wants the races they row in to be fair, and this really would be a big move in that direction. Please feel free to contact me if you want to disagree, agree, recreate my analysis so you can believe it for yourself or simply have questions about what I did.

I would like to thank the truly nice folks at Concept2 for sharing their data, and in particular for sending me all the scores in one file. If you have any questions or suggestions, about my analysis, I would love to hear from you. Masters rowing is growing like crazy and we should really make the effort to get this right