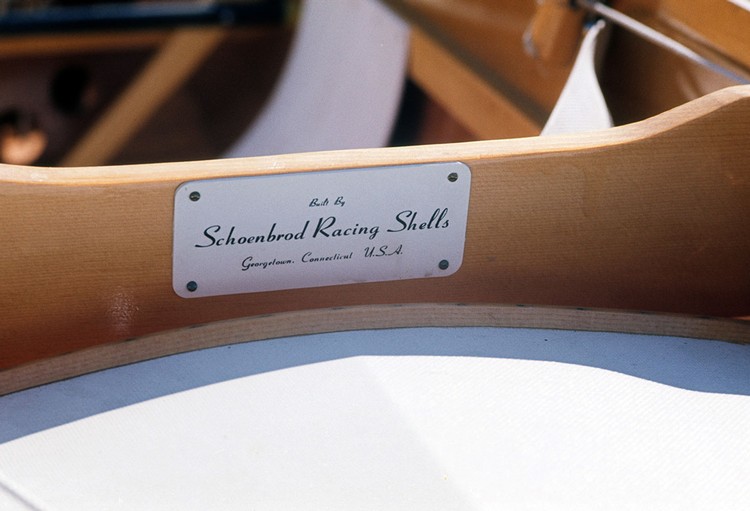 I WOKE UP, FEVERISH AND SWEATY, exhausted from the nightmare of an imagined race.

Suddenly I heard the knocking from my dream again, and for a moment I thought I'd finally gone mad. Double sessions had already gotten to me. I drew in a long breath and let it out slowly. Then I realized that the knocking was actually coming from my door.

"Hey, get out of bed, butthead! We'll be late for practice," said a familiar voice. It was Rob Leavitt, the three seat of our boat. He'd been banging away for several minutes, trying to wake me up.

"Ugh," I responded. I reached for a bottle of the aspirin near my bed and popped four into my mouth. Without water, they went down like rocks. Then I threw on my damp rowing clothes from the day before, still drying on the radiator, and joined Rob in the hallway.

"Thanks," I told him. "Your breath smells like crap."

"I guess that makes us even," he replied. Rob was pre-med and had a very pragmatic view on everything.

"Double sessions suck," Rob offered, as we got into his VW beetle. He often drove me to practice, since we lived close to each other, in the main quad.

"Not much of a conversationalist this morning," he observed.

Rob drove like a taxi driver from hell, but he was quite skilled at finding the best back roads through East Hartford. Despite our late start we arrived nearly on time and wandered into the bays to locate the rest of the team. Everyone was gathered around a new boat that Charlie had just finished rigging. Heidi was inspecting the stern cables and the rest of the boat. It was a fiberglass Schoenbrod that the junior varsity heavyweights weren't using this season, she explained, since they'd been reduced to a four due to injuries.

"So it's a freakin' heavyweight hand-me-down," Wean said in disgust.

"Yeah, but it's pretty new - it doesn't even have a name yet," Heidi observed.

"No, it's Casper the Friendly Ghost!" Henry Phillips offered. Everyone looked at him in silence and frowned at the missed attempt at humor.

"Who is Casper the Friendly Ghost?" Porgy asked.

Porgy looked over at me for help, but when our eyes met, they quickly fell away, suddenly remembering our tattoo parlor antics from the previous night.

"My shoes are too big," he said, trying to change the subject.

"Now let's not make too many pre-judgments," Dak advised.

"Yeah, it looks cool to me," Joe said, running his hand over the hull. "Smooth as a baby's bottom."

"Jeez, Joe. You're from the Planet Weird. You know that, right?" Wean said.

"Alright, hands on!" Heidi bellowed, calling the practice to order.

Whatever the name of the boat might be, it was ours.

As soon as we put the new shell in the water and tied in, we realized that things were going to be different. Many coaches will try to convince you that it is the people in the crew, and not the boat itself, that is of primary importance. Boat manufacturers, of course, will tell you the opposite. The reality lies somewhere in between. And as we were about to discover, there exists a dynamic relationship between a crew and their boat which can profoundly influence success.

Our new eight was certainly oversized, but on the plus side, it was noticeably lighter in weight, making it easier to carry and to move through the water. As we started paddling, we immediately noticed this, along with how tricky it was to balance. With a boat average of 149 pounds per man, there was barely any displacement of the hull in the water. On the other hand, our over-buoyant boat was much more responsive to everything we did, and this forced us to row better as we progressed through our ritual warm-up drills.

Coach Poole followed along behind us in his launch, watching how we adjusted to the Schoenbrod and seeing if we could handle the bigger hull. The answer came soon, after we'd finished our warm-up drills and Heidi called out, "Weigh enough!" We feathered our blades out of the water in perfect unison and the hull magically found its precise centerline. None of our blades touched the water, and Heidi had us hold the pause and balance as long as we could, until the boat came to an eerie standstill.

Everyone was silent. Charlie cut his engine, watching in disbelief.

"Let fall!" Heidi finally said, with delight in her voice.

"Okay, I wasn't going to have you guys do any pieces today, but let's try a few 500's with the heavies just to see what happens at full pressure," he said.

We paddled up alongside the heavies, who were still in a wooden shell, and then Charlie called out 'Three to build!"

Peter Tyson wound it up to a solid 32, then 34, strokes a minute, and as we found our rhythm, something magical happened. Stroke followed stroke in flawless succession, and suddenly it felt like we were barely working. We were flying. The fiberglass hull, which was now barely touching the water, started making a very particular and pleasing sound, like a cat that begins to purr when it is scratched just right. It gurgled as the trickle of water flowed beneath it, like the sound of a hidden, underground spring.

We flew by the heavies and beat them by a boat length. Then we did it again, and again. Seven times. They were so shocked, they didn't know what to say. Lightweights weren't supposed to beat heavyweights, especially not in a heavyweight hull.

No one in our crew said a word either, for what had just happened defied logic. We were the wrong size for the boat, and it was tippy at rest, but somehow it sprouted wings when we all started rowing together at the right speed.

All we had to do was find "the gurgle."

Our spirits restored, we returned to the Bliss Boathouse and put the boat back on the rack, wiping it down with care.

"Okay, our first race is in less than two weeks!" Charlie announced, when both crews were assembled. "The Coast Guard Academy in New London, Connecticut."

I felt my heart lift up into my throat, where it would take up permanent residency for the next several days.