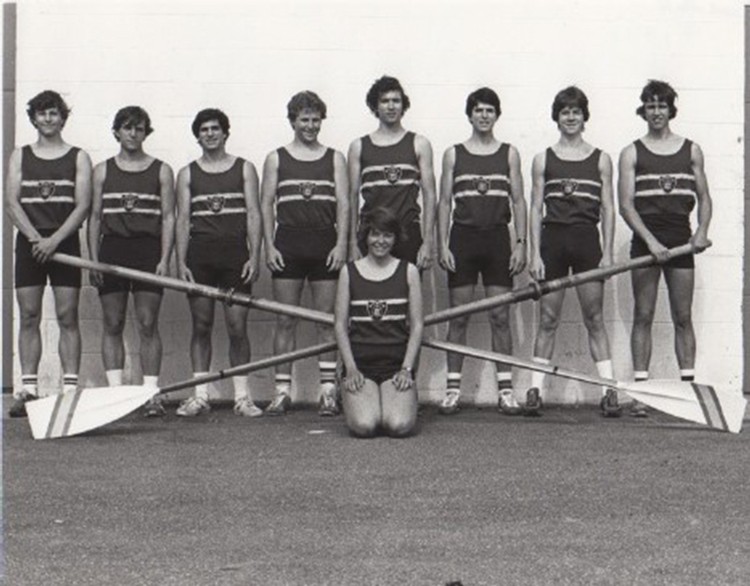 I COULD FEEL THEIR EYES ON ME, watching every stroke I took.

Dak, Pete Tyson, Wean, and I were rowing together in the tanks, working on the finer points of the catch. Charlie Poole was standing below us, occasionally offering bits of advice, and beside him stood Norm Graf. Every once in a while, glancing out at my oar, I could see them conferring, trying to puzzle something out.

Although I took it for granted at the time, it was a weird thing to be watched constantly - particularly in a rowing shell, where one is held captive not only within a restricted area of space, but also within a limited and repetitive field of motion. In a way, a coach is like a spy who witnesses your every move, putting you on guard but often making you perform better.

The words instantly brought excitement and fear into my psyche.

Dak and I got up and dutifully changed places. He was a much stronger oarsman than me and had much more right to occupy the lead seat.

In the fall, Dak had served as our stroke, and together with Pete Tyson sitting right behind him at seven, they had done a fine job. This preliminary choice for the stern pair made a lot of sense, given the prior experience that these two brought from Exeter and Undine. But now some of the more novice oarsmen like myself had gained competence, and with spring approaching, Coach Poole needed to reconsider the lineup. We'd also lost a few strong lightweights that winter and gained a few new ones who'd never rowed at all. One was a guy we simply called "Tex," because he was from Texas; the other was the son of a Trinity chemistry professor named Henry Phillips, Jr.

All told, there were now nine of us competing for eight seats, and still no coxswain to be found.

It is perhaps more of an art form than a science to find the right combination of oarsmen in a crew to make a boat go well. Naturally the stroke is of primary importance, as this person not only sets the cadence for the group but is also the one in whom everyone places their trust. I felt totally unprepared for the lead role, but that afternoon as we started paddling again with the new lineup, the coaches seemed to like what they saw. I had a natural sense of rhythm, balanced with a lot of patience on the slide. Clearly, all that guitar playing had paid off.

Charlie got out his stroke watch and called out some target stroke ratings. I hit them intuitively almost every time.

"Nice job!" he called out. I glowed inside, but part of me was still uncertain.

It is one thing to be able to set a cadence, and quite another to be able to maintain it under pressure. To be sure, I was flattered, because sitting in the stroke seat is clearly an honor that dubs you as one of the better oarsmen in the boat. Every rower should try stroking at least once. If they did, they might discover that it is much like being handed the leadership of a company, or a perhaps a small country, but it comes with a great responsibility for which most people are not cut out.

For a week or so, I enjoyed my reign. There is a wonderful and true sense of power when everyone falls into line behind you, and you hear the collective crush of oars against still water. As our eight surged forward, my own single oar seemed to carry the authority and power of seven others. For a while, I felt like a superhero. We had just started to get back on the river a few times a week, as the winter ice broke up and the weather brightened. Everyone was quietly optimistic.

Then steadily, I began to get tired.

At first, I thought it was the cold doing me in, as it became harder and harder to get out of bed each morning. Then one day, sitting at stroke, I suddenly realized what was wrong. With no one else to follow, I never had any time to relax. My catches grew stale, and no matter how many times Charlie reminded me to "drop the blade right in," I started hesitating at the start of each stroke, as if waiting for everyone else. Ironically, all the control I possessed began to work against me, and I started to get worn down, trying to second-guess whether I was setting the right pace. I even dreamed about it in my sleep, and occasionally it woke me up at night.

And so, when I was finally pulled from the seat, I was actually relieved. Next, Charlie tried out Henry Phillips at stroke. Like myself, Henry was lanky and lean and had a decent stroke for someone who had just learned how to row. His main problem, however, was that no one accepted him. He had no racing experience whatsoever, not even the past fall, and his erg scores were some of the slowest on the squad.

"Look at how skinny his legs are," Rob Leavitt griped.

"Yeah. And did you see how he dropped out on the last team run?" Porgy added.

With these few words, the beginnings of mutiny had commenced.

Eventually, Coach Poole saw that no one would follow poor Henry Phillips. Chaos reigned for a few days, and then he too was relieved of command. And so, heading into March, we were not only uncertain about who could handle the stroke seat, but also who was going to steer our boat. And as the ice finally melted completely and we took to the water more regularly, Charlie began a game of musical chairs. Each day, one of us would cox so that the rest of the team could practice, and everyone on the port side got a chance to stroke. More often than not, Tex ended up as our cox'n, for he had a propensity to crab with such violence and frequency that we secretly began to refer to him as "King Crab."

Then one day, just before spring break, Charlie announced that he had a surprise for us, as we sat in his station wagon on the way to practice.

"It took me awhile, but I think I've figured out a good lineup," he said.

At the boathouse, we drifted into the bays and found our eight laying right side up in slings. Something looked weird about it. The stroke seat rigger had been moved to the starboard side, and behind it were two consecutive port riggers.

"It's called a bucket," Charlie explained. "European crews use them a lot."

Peter Tyson was selected as the starboard stroke, followed by me and Henry Phillips in the bucket. Dak, the strongest and biggest of us all, was installed in the five seat. The bow four consisted of Joe "Rhino" Rhineman, Rob Leavitt, Porgy, and Wean.

Everyone seemed relatively happy about the new lineup, but a few things were clearly missing. "Where's Tex?" Rob Leavitt asked.

Charlie shook his head and then politely announced that Tex had voluntarily dropped out. We were quiet for a second and suddenly felt ashamed.

"On a more positive note, I have another surprise for you," Charlie added, nodding over toward the entry of the boat bay, where we could hear the arrival of the other squads.

Everyone turned and watched as a familiar figure walked slowly forward and stood beside Charlie, all bundled up in winter coxing gear.

"Heidi just got cut from the women's team, but she's agreed to try out coxing for you guys - so be nice!"

We all looked at each other, secretly delighted.

"What did he say?" Heidi asked.

"I think that means he likes you," I said.

Everyone laughed and the ice was broken.

"All right then, boys—HANDS ON!" Heidi said, with playful confidence and the smoky timbre of Lauren Bacall.

She had our attention from the first command. 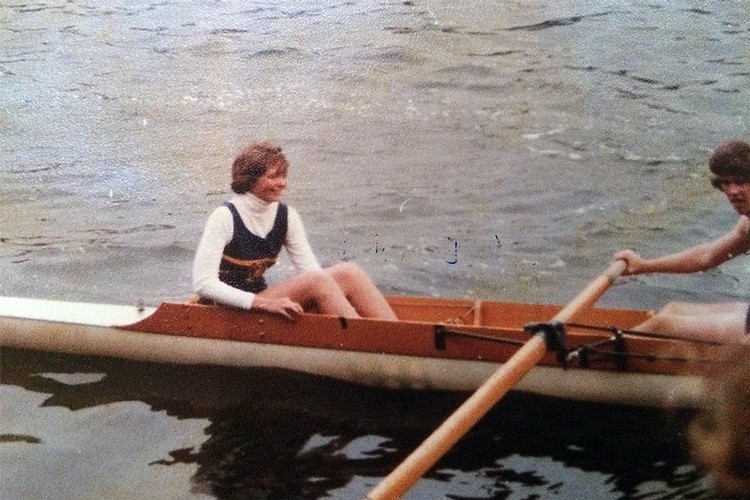