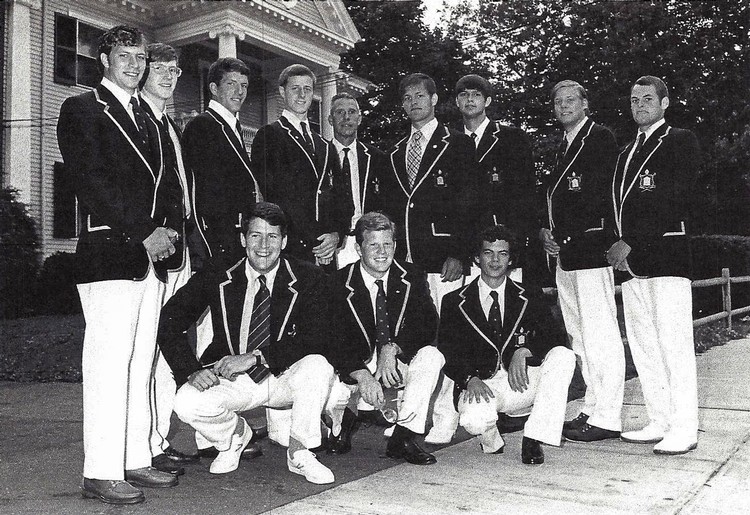 With the exception of a few local dives like The Nutshell Café, the social scene at Trinity was mostly limited to on-campus diversions. When I wasn't working out, I followed the rest of the undergraduate herd and traversed the well-worn paths between the dining hall, the dorms, and occasionally the art cinema. It was a woefully circumscribed life, but then again most colleges are built to that end - designed for the purpose of keeping students insulated from the real world, and trapped within their walls like captive sheep.

Hartford, Connecticut, offered little respite from this monastic situation. A city which had once been one of the richest in the nation, and home to the celebrated author Mark Twain, had become, in modern day, "the insurance capital of the world." Needless to say, it was not a cultural Mecca.

As a result, on the weekends, the half dozen Greek fraternities on campus reigned supreme, despite attempts by college administrators to hold "semi-formal" gatherings as alternatives to those dens of iniquity, whose floors reeked of cheap beer. The frat houses were by and large inhabited by over-solicitous upperclassmen, who stood around like vultures trying to convince freshmen guys to join their ranks and freshmen women to share their beds.

As far as I was concerned, I'd already joined one fraternity, and that was sufficient for the time being.

Aside from the high brow castle of Saint Anthony's, sitting alone at the top of Mount Vernon Street, most of these residences were unimpressive from any perspective - architectural or otherwise - and they diminished in stature the further downhill you travelled. This was generally the direction that everyone went on a typical Saturday night, progressing from one house to the other, like trick-or-treaters.

The Trinity semi-formals, of course, were equally sad affairs. Since no one knew exactly what "semi-formal" meant, people showed up in all manner of garb, including leisure suits - an unfortunate fashion choice during the final days of disco, in the late1970's. Most of us freshman guys stood around like stiffs, waiting for the lights to dim. Eventually, a few brave souls would venture out onto the dance floor and shuffle to the sounds of Earth, Wind, and Fire, Donna Summer, or the Bee Gees. An hour or so was about the length of time you could tolerate such abuse - then it was off to the frat parties to try your luck.

Naturally, I made liberal use of my membership on the crew team to gain entry into those private establishments, whose weekend fetes were often restricted to "members and their guests only." Psi U and AD both had varsity oarsmen among their ranks, and one could easily cop a free beer by chalking it up to unsuspecting brother - particularly if he was away that weekend. I also tried to use my nascent rowing membership as social currency with the opposite sex. After all, most anyone who didn't row seemed impressed by the sport, and one evening at Psi U I had caught the ear of an exotic and beautiful Iranian girl who seemed quite captivated by my descriptions of the Connecticut River.

"Tell me more about this - ROwing," she said.

Her name was Kooshe, and her awkward use of English only added to her charm, as did the numerous bracelets on her forearms. They slid up and down and chimed together as she moved, creating a musical sound.

"Well, rowing crew is intense..." I started to explain over the din.

Suddenly I heard a familiar voice come tumbling over my shoulder, repeating my words like an annoying parrot.

He had been eavesdropping on my conversation, of course, along with Mongo, who stood right next to him, grinning like an idiot. Crew people are good at many things, but social interaction is not high on the list.

"Whatever, Woodridge," I said, trying to give him the brush.

"It's not 'whatever,'" Woodridge pressed on. "As a novice, it's important for you to learn the proper terminology."

"That's right, knucklehead," Mongo chimed in. "It's an oxymoron."

"I really don't care..." I said, turning my back on both of them. I tried to recapture the attentions of my female companion, but their presence made this impossible.

"It's not an oxymoron, actually," Woodridge muttered to Mongo. "It's simply a redundancy."

"Well, you're an oxymoron, Woodridge, and I'm going to kick your ass!"

Mongo chased Woodridge out of the frat hall. I admit that I'd never seen him move that fast, for usually he was the slowest on the team runs.

Immediately, a spirit of combativeness seemed to catch hold in the room. Kooshe and I watched as a wresting match spontaneously began between Wean and Jason Smith. Wean was fierce in battle, but Smith handled him with gentle authority.

"You know you're not going to win this," Jason chuckled, as the two of them dropped onto the beer stained floor, locked in an awkward embrace.

No one else moved or took much notice. Kooshe, however, lifted her dark eyebrows with great interest.

"Are these rowing friends of yours always so crazy?"

"Oh, I like it. I think I should very much like to join this group," she said.

She frowned. "You don't believe that I'm serious?"

"Maybe you would like to arm wrestle with me, to see how strong I am?"

I confess that I almost spit up my beverage. While the prospect of holding hands with this beautiful, exotic woman was enticing, an arm wrestling match was not exactly what I'd had in mind.

By this time, however, Mongo and Woodridge had returned, having worked out their differences.

"C'mon, you wimp! Are you afraid of losing to a chick?"

I shook my head dismissively, as the memory of Big Tina began to emerge from the dark recesses of my brain.

"I'll officiate," Jason Smith offered, leading us both over to a table.

Kooshe and I locked hands, and her bracelets jangled lightly. She bit her lower lip to prepare for battle, and then starred intensely at me with almond colored eyes.

I confess that I melted right then and there.

Guys generally know all the tricks of arm wrestling, like keeping a firm wrist by quickly curling it in. But was Kooshe was a formidable opponent, and I found that I could not move her, try though I might.

The match was already over, I just didn't know it yet.

"What are you waiting for Boyne?" Mongo chided. "Take her down!"

Suddenly a beer was thrown in my face, blinding me, and then I felt my knuckles get slammed down violently.

"The Winner!" Jason Smith said, holding up Kooshe's hand. I saw the two of them exchange glances, and then Kooshe beamed. I suspected foul play, of course, but there was nothing to do but grin and bear it.

As I wiped the beer from my face, one thing became clear. I had just lost a potential girlfriend to Trinity Crew, and quite possibly to Jason Smith. 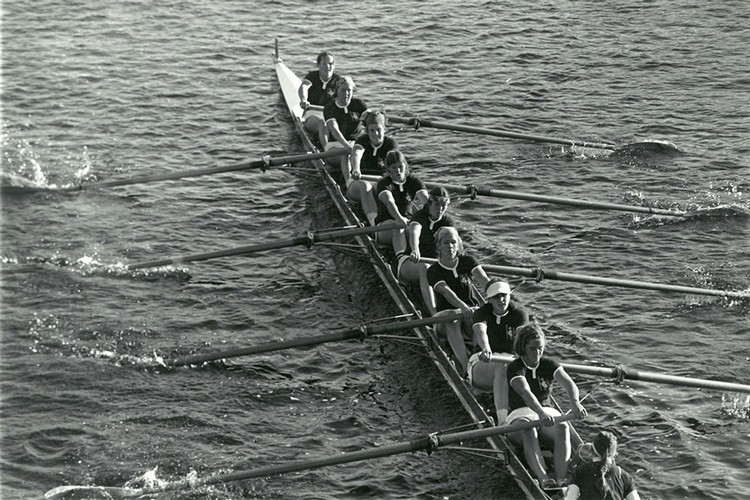 Fortunately, my loss was upstaged by the arrival of a newcomer, clumping her way noisily down the stairs.

"Now what do we have here - a new recruit?" said the unmistakable, faux military drawl of the women's varsity stroke. She was built like a bricklayer, with muscular arms and legs, and a mop of brown hair cut short hair like a boy.

Apparently I wasn't the only one with a story to tell.