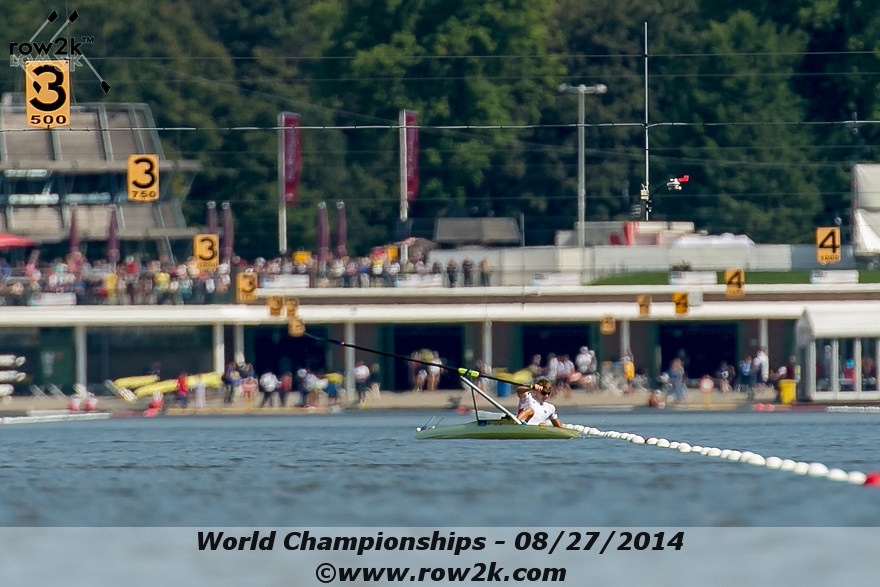 Andrew Campbell, the USA LM1x for the World Champs in Amsterdam, entered the regatta as one of the medal favorites following his second U23 title in the event the month prior.  He won his heat, then disaster struck in the quarterfinal when he clipped a bouy with his starboard oar and capsized into the Bosbaan.  He was able to get back in and complete the race, but was pretty disappointed not to get a chance to race in the A Final.

"I was coming through 500, and I clipped a buoy on my starboard side," he said. "The oar came out of my hand , and then immediately just crabbed hard and flipped me in the water. It is pretty devastating, as I know I could be a medalist at this regatta. I was on track to definitely make the podium. Of course it's pretty disappointing."

Catching the sequence with my camera was not something that should have happened as I rarely track crews after about 250 meters but for some reason I continued watching.  From my perspective it looked like he had been rowing near the bouy line.  Then one of the safety launches passed in front of him and once it had passed he was mid crab and quickly went in.

Prior to the start of that block of racing, the regatta had just finished installing wifi in the photographers tent at the start line.  One of the other photographers asked me if I needed the password for it, and my response was, "No thank you, I won't need to get online down here unless someone flips or something…"  So, yeah, I don't really believe in the power to jinx people, but I still feel pretty bummed in this case.

Campbell bounced back about as well as possible, winning his C/D semifinal, then setting a world's best time enroute to winning the C Final.