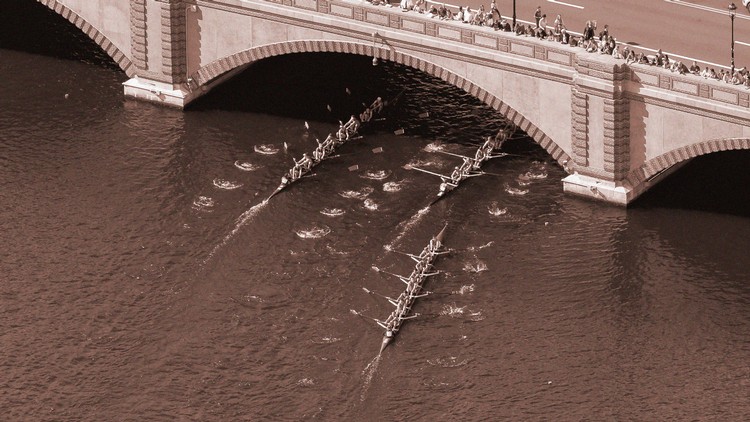 We were entering the last mile of the Head of the Charles, and by some small miracle, no other boats had passed us yet. Cornell and Columbia were locked in a furious battle just off our stern, however, and it was only a matter of time before they closed the gap.

"C'mon, give me some real p-p-power! Make yourselves p-puke!" Phil said, in a sadistic, almost gleeful, tone of voice.

I'd made the boat by the skin of my teeth, holding down the two seat of the bow pair with another lightweight named Tom Crowell. There are many advantages to rowing in the front of the boat, but there are challenges, too - particularly when you have a psychopathic helmsman and you are racing on a course strewn with obstacles.

Philippe Poupée, our foul-mouthed cox, had gained his seat by default. Everyone else that Coach Poole recruited for that position had quit, unable to handle the rigors of morning practice. We were all praying that Poupée would follow suit. He was an insufferable soul who clearly hated coxing, and he had a jealous disdain for those of us who rowed.

Some coxswains are just plain mean, and like junkyard dogs, you learn to stay away from them. But Poupée, who was the son of a prominent New York City art critic, could be clever and charming when he wanted to be, which made his derisive comments sting all the more.

"You guys row like old people having sex - slow and sloppy!"

It was impossible to tell whether this latest insult was directed at us or at our opponents, but it hardly mattered. The two Ivy League crews had now drawn even with our stern, and the middle arch of the Anderson loomed ahead, promising passage for only two eights.

As if on cue, Cornell began to advance on our starboard side, Columbia on our port. We were caught between Scylla and Charybdis, and Poupée knew it.

"Yield!" the Cornell cox yelled, cutting inside of us.

"Move!" the Columbia cox demanded, swerving the other way.

Suddenly, 32 oars clashed together violently under the bridge, creating a terrible racket. The two other eights had essentially sandwiched us, bringing our novice Trinity boat to a complete halt.

"B-b-bugger off, you Ivy League a-holes!" Poupée shouted, as Cornell and Columbia trampled through us and just kept rowing.

I laughed, despite the direness of our situation, and regained control of my oar. We rowed on undaunted, and I couldn't stop myself from smiling periodically. Despite his numerous faults, our coxswain had an unassailable ego.

Phil even wore his speech impediment with pride, acting as if the rest of us were saddled with a more commonplace tongue. An eccentric dandy, he had a thick briar patch of black curls crowning his head, which he unsuccessfully tried to tame with hair product. And much to Coach Poole's dismay, he refused to wear any sort of athletic clothing, preferring the black jeans and turtleneck garb of a beat poet.

And as much of a demon as he was in the coxswain's seat, once on dry land, Poupée was even more insufferable. After the race, when our boat was back in slings and Coach Poole wasn't looking, Phil produced a packet of Gitanes from his back pocket and started puffing away, while the rest of us set to the task of de-rigging.

After a long drag, followed by a slow pursed-lip exhale, he held the French cigarette within the folds of his long, delicate fingers and sneered at anyone who dared to challenge him.

"Rowing is so d-damn asinine," he quipped, looking scornfully at the next race going by. "I really don't understand why people get so worked up about this c-crew crap anyway!"

"What do you mean?" I asked. I liked Phil for some strange reason and often hung out with him, just to hear what sort of bile would come out of his mouth.

He rolled his dark eyes heavenward, as if the answer was obvious, then sneered with devilish delight. With his high cheekbones, rampant acne, and arched eyebrows, his face was an odd assortment of features that came together to form an exaggerated, artificial look - much like an evil mannequin in a B horror movie.

"Oh my g-g-god!" he exclaimed. "Who in their right m-mind would want to wake up at a god awful time in the morning and freeze their ass off just for this? C-christ, I'd rather be reading Proust and sipping a glass of scotch."

He shrugged, at a rare loss for words.

"Because my father told me to, I suppose. He gave me some character - building bullshit line of crap."

"Seems like you have plenty of character already," I observed.

Just then, two of the other guys from our crew walked over.

"Nice job, Poopee," one of them said.

"Oh that's brilliant," Phil replied. "I mean, no one's ever called me that one before! Did you think of it all by yourself?"

"You little French bastard," the other said. "You cost us the race!"

"I'm Belgian, you jackass," Poupée snapped back. "And I didn't cost you anything. I coxed your damn race for free!"

The two just stood there, shaking their heads in disbelief.

Poupée tossed his half-smoked cigarette into the Charles, then began to walk away, proud and undefeated.

"I'm going to find a bar," he said, glancing over his shoulder.

"But what about training rules?" I called out.

"Screw that. Tell Charlie I quit," he said.

And so, heading into winter, we were once again without a coxswain.