row2k Features
row2k features > Coxing
How to Throw Your Coxswain in the Water
April 29, 2000
Rob Colburn 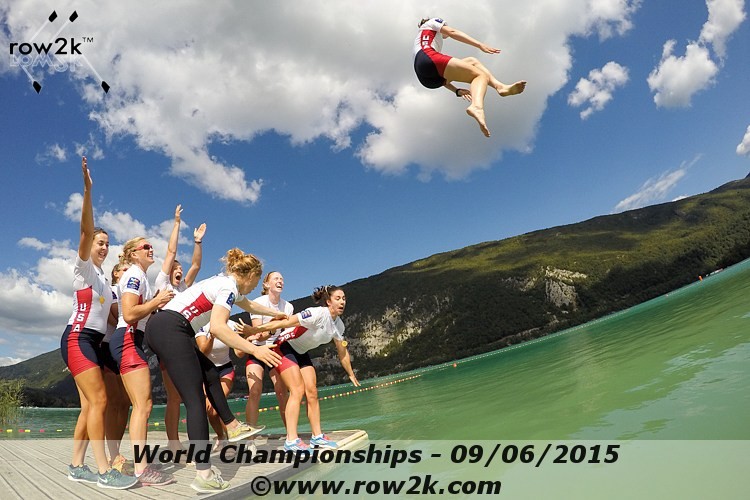 For most coxswains, being thrown in is the perfect end to a perfect day

There are many styles, the quick pitch off the end of the dock, the one-two-three heave, and the no-warning up-and-out which sends the flailing coxswain -- usually face-first -- into the briny deep. Winning is the sweetest moment, and winning boats deserve to savor it fully. Throwing the coxswain in (no doubt a vestige of some primordial sacrifice to appease the water gods) is more than just a reward to the boat; it is also a photo opportunity. Best of all are the boats who treat themselves and their fans to the full ceremonial, counting off a swing for each of the rowers who created the victory.

This is Stroke's opportunity to give the orders for a change. Sauce for the goose is sauce for the gander. Having absorbed the brunt of the coxswain's verbiage at point-blank range all season, the Stroke is entitled to play some of it back.

"Lay hold!" With the full boat in attendance, especially if your coxswain is a squirmer, carry -- or frogmarch -- him or her down to the dock. Handling a coxswain is a lot like handling a shell, only they set up better, and you don't have to wash them down after they come out of the water.

"Count off when ready."
"Bow"
"Two"
"Three" With each count, the swings get larger
"Four"
"Five"
"Six" By now there should be some good amplitude going.
"Seven"
"Stroke"
"COX!" and heave the little bastard as high and as far out as possible. Over the season, the rowers should be able to increase their distance with each toss. Even if none of the major regattas yet recognize the Coxswain Throw as a sanctioned event, FISA is expected to reconsider this restriction, and you want you crew to be ready. You've probably seen the classic photo of Harvard lightweight coxswain Kevin Murphy being thrown in after Eastern Sprints. They must have heaved him like a javelin, because he is way over their heads, arched out in a perfect reverse swan dive, with a blissful smile on his face. I tell all my novice coxswains: "You want to be the coxswain in this photograph."

For most coxswains, being thrown in is the perfect end to a perfect day, and they enthusiastically join in. There are always a few dissidents who allow trivial fears of hypothermia, toxic runoff, or impalement on a submerged log, to cause them to resist. Coxswain escapes are serious and time-consuming; once loose, they can wedge themselves like hermit crabs into impossibly small crevices in the luggage compartment of the bus or under the sink in the training room, and -- depending on how much weight your cox has had to cut for the race -- it will cost you at least half of a box of fig newtons to lure them out again.

One of the rowers -- someone big and who is impervious to appeals for clemency (such as your five seat) must keep firm hold of the coxswain from the moment the shell returns to the dock. It is not enough simply to run a trailer strap through the gussets of his or her jacket -- coxswains can gnaw right through those. If things are busy on the dock, and no one can be spared for sentry duty while the shell is washed down and put away, temporarily empty the equipment box. (Most coxswains can be made to fit as long as you fold them properly, and if enough rowers stand on the top to press it down. Remember to punch some holes in the lid.

One very cold day early in the season, the winning coxswain of a crew which shall remain nameless (it's not the one you're thinking), succeeded in getting the drop on his rowers, forcing his exhausted crew to chase him on race-tired legs. He got as far as the soccer fields before they tackled him, dragged him down to the boathouse, stripped him to the essentials, and threw him in. They then lined up on the edge of the dock and pushed him in again every time he tried to climb out. He had turned a very satisfactory shade of blue before they relented.

They made their point.