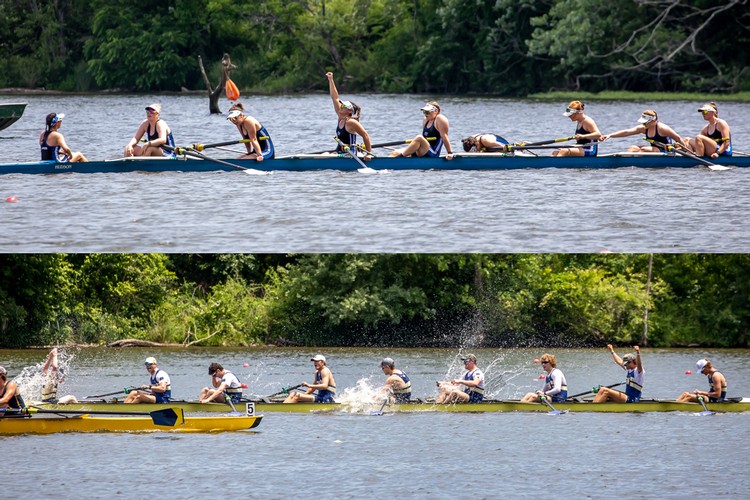 2022 brought the ACRA National Championship back in full force: now the largest collegiate regatta in the US, the ACRA brought over 300 boats from nearly 70 schools to Oak Ridge for three days of racing that was both inclusive and high caliber all at once.

The national scope of the ACRA and its membership was on full display, with winners from Rhode Island (M4+), Texas (LM4+), Florida (M2-), Central Florida (Novice W4+), Oklahoma [State] (W1x), Virginia [Tech] (M1x), and [Western] Washington (Novice M4+)--in addition to the winners of the Varsity Eights: the Grand Valley Women and the GW Men.

It's hard to win a National Championship in the single as a collegiate athlete in the States because, apart from the ACRA, there aren't any.

All the better for Oklahoma State's Rebecca Korn and Virginia Tech's Thomas Foltz to have their shot at winning it all solo here at the ACRA. Both scullers dominated the weekend, winning from the Time Trial through to putting up big margins in their respective finals, leaving little doubt that they were the class of the field. 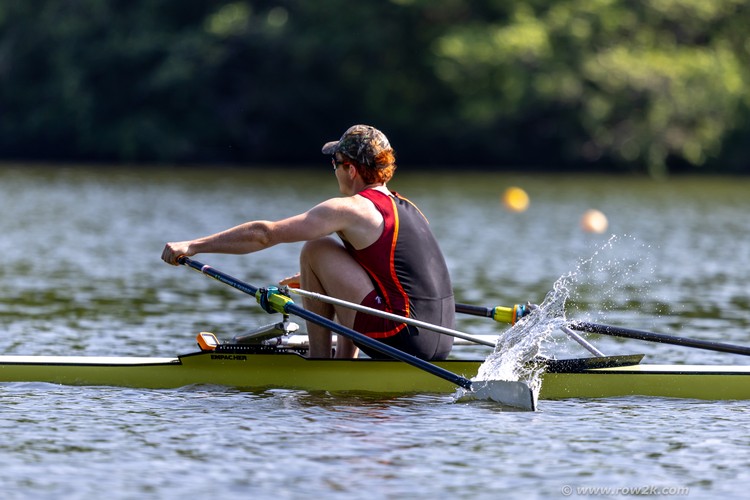 "I am happy with the result," said Foltz afterward. "It was a weekend where I didn't physically feel particularly 'fresh' at any given point, but just tried to use each race to take better strokes than the last, recover as well as I could in between, rinse and repeat. I would call it a productive weekend for sure, and I certainly can't complain about the win!"

For Foltz, who lead the field in the Dad Vail single final a week ago but got DQ'd at the finish for steering, ending his season with a clean run and a win was especially sweet.

"The disqualification was certainly hard to sit with for a few reasons, one big one being that I know I had a great piece." he said. "Not the perfect result for my first time ever 2k'ing on the Schuylkill, but I think driving my boat to an unfamiliar city, and getting myself to and from the course to execute a championship regatta completely solo is something to be proud of."

For Oklahoma State's Korn, her win was actually all about not working alone. She credited her teammates for the win, calling it, "all due to having trained against the women's novice 4+ for the last 3 months of the spring semester. I thrive in any competitive atmosphere, coming from basketball and softball in high school, so it was easy to get into the groove of rowing and I loved every minute of it." 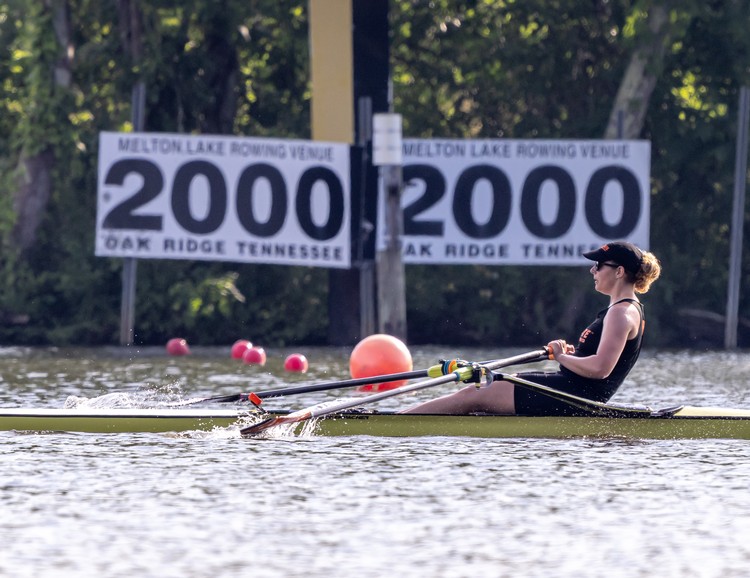 "This regatta made me a nervous wreck," she added, "especially with the high head/cross wind on Thursday and Friday. That all went away when I got to the stake boat and there was nothing else I could do but my absolute best. I was mostly focused on maintaining technique and rate before the final 250m sprint."

"For the finals race I went in reviewing the footage from the live video and speed coach. What also helped was the recognition from other coaches, family members, and team mates. Then I went out with a clear mind and just focused on beating my previous time."

The University of Chicago crews won both the Women's Double and Women's Pair, and their Men's Pair grabbed a bronze medal as well.

Club President Isadora Kron and Daniella Morgan-Pascualvaca got things started with a commanding win in the Double over Washington University of St. Louis, then Laurel Lyngklip and Elizabeth Ugan took the pair over the Texas club team. The Men's Pair of Alexander Urqhart and Raphael Stone completed Chicago's run of hardware in the early morning finals, taking third in a final won by the University of Florida's Elijiah Rice and Thomas Spelmans.

"These athletes all spent the past two years of the pandemic rowing small boats," said Chicago Head Coach Trish Brubaker. "We're really glad it paid off." 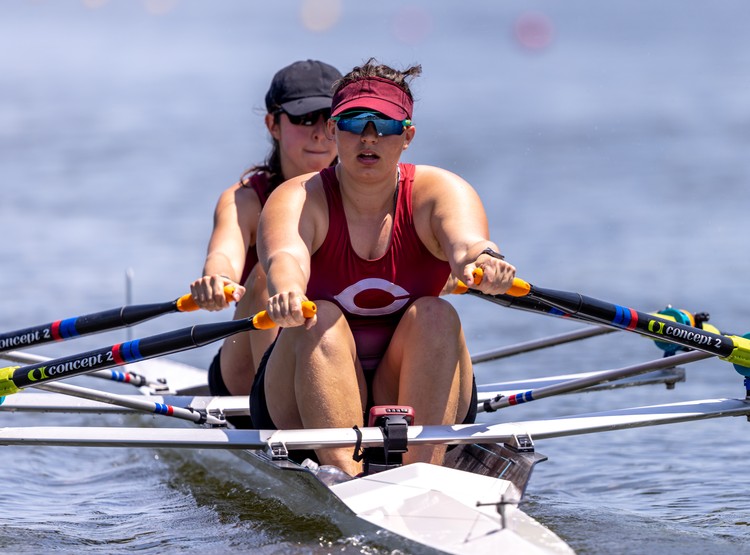 U of Chicago's Isadora Kron (stroke) and Daniella Morgan-Pascualvaca (bow)

Kron added: "Many of us found rowing to be an important source of community during the pandemic. I credit much of our success today to our commitment to each other and the team, which we have really cultivated over the past two years."

While Chicago's rowers may have been working in small boats quite a bit, that was not true for everyone in the Women's Double field. According to this Twitter post, 50% of the UNH double just started sculling this past month; they took 3rd in the Petite final.

The National Championship in the Varsity Eights went to the favorite on the Men's side: the George Washington Men have been ranked #1 in the ACRA polls throughout this, their first year being back to club status after being cut by the GW Athletic Department in 2020. 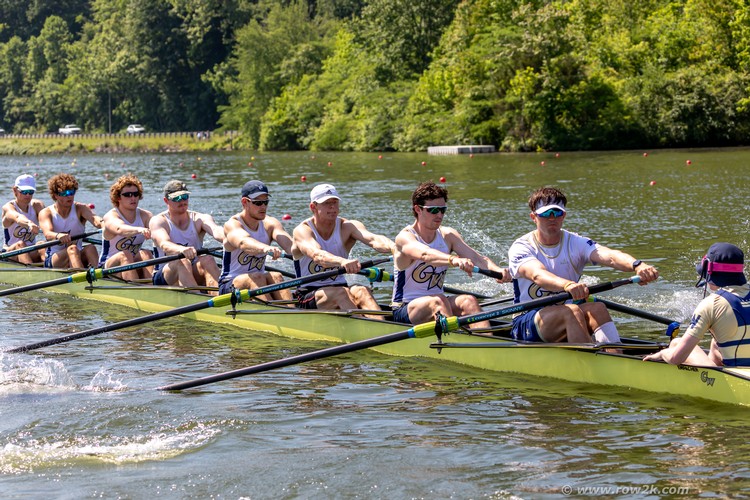 Last year, the GW Men raced to their highest finish ever at the IRA in their final year of varsity eligibility, and this year the team made good on their first chance to race the ACRA with a powerful and patient march down the course ahead of a furious battle sprint for second that saw UCLA touch out Michigan; UC Irvine was fourth, Notre Dame 5th, and Purdue 6th. In all, 24 schools raced for this 2022 ACRA Championship.

row2k caught up with GW's senior coxswain, Luke Ames, to hear how he called it:

"Going into the final we knew that the rest of the field was going to try to hang with us in the first 1,000 meters of the race. We all said to each other that the confidence in our base pace was going to be essential if we were going to walk away with a gold medal.

"Michigan, UCI, and UCLA had a really fast start. We were down about 5 seats to Michigan I believe coming into the 500. As the race wore on, we kept hammering home the message that our base pace would prevail in the end and I think that kept everyone confident and focused on the stuff happening between the gunwales.

"By the 1K, we were dead even with about three other boats, and we took our big move to get out ahead and control the race. Great response to that call by the guys and it was so effective that I think we knew we were in a good spot to win with about 650 to go. The rest is history, I guess."

"So proud of the boat and the entire GW Rowing community that has supported us without fail in the past year," Ames added. "And thanks to the ACRA community as well. We felt welcomed with open arms by all of the teams. GW is looking forward to coming back in years to come."

GW also won the 2V8, while Bucknell picked up its first ACRA eight gold with a win in the 3V8.

The Women's National Championship in the Varsity Eight went to long-time ACRA powerhouse Grand Valley State--and it was both another championship for the school and a repeat gold for the seven women in the boat who had won the 2019 ACRA as a Novice 8. 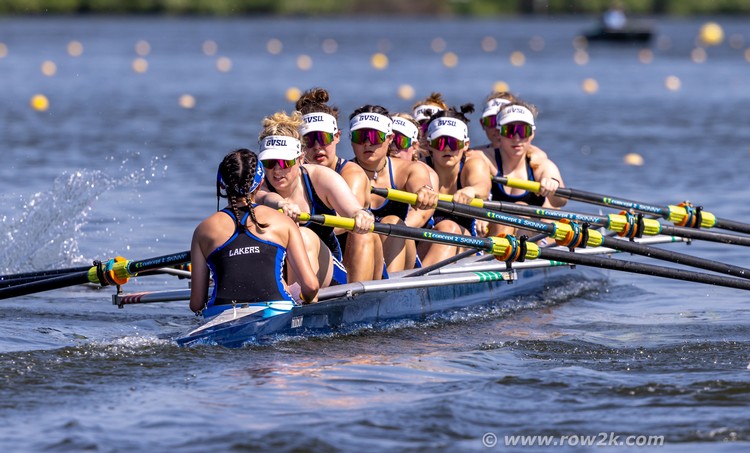 One of the original ACRA schools, Grand Valley picked up this 2022 title with a wire-to-wire win, as 2nd place Purdue was just one gear shy of closing the gap in the last 250 meters. Middlebury took bronze, while Vermont was 4th, UC Irvine 5th, and UC Davis sixth. Eleven schools raced the event in total. 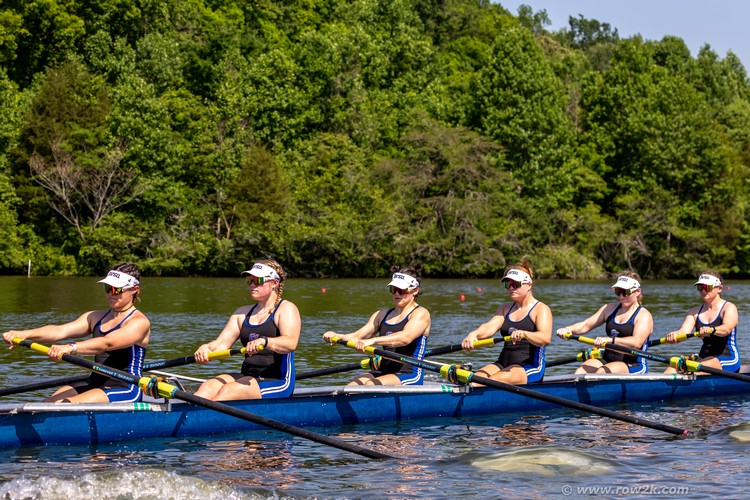 "I'm thrilled for the crew of the WV8," said GVSU head coach Dan Martin. "Seven of the 9 of them were in the WN8 that won gold back in 2019, so to see them close their careers after a two-year interruption was really great.

"We knew going in that it was going to be a fight: we'd split our two previous meetings with Purdue and knew they'd be bringing their best, and Middlebury and the UC's had been looking great all year.

"It was a whole-team effort, too," added Martin, "with 12 different women racing in the 1V through the year, and the ones who ended up in the 2V really helped drive that boat to their wins at Vails and ACRA."

That Grand Valley 2V8 won a gold of their own, snatching a blink-and-you-missed it win over Purdue, while Northwestern won the Women's Novice 8 final.

There were a few events with familiar scripts as the finals rolled along:

Lafayette's Varsity Women's Four won today, just ahead of the Bowdoin four with whom they battled at the Dad Vails, too--and Bowdoin made it far closer today--while Grand Valley and Purdue chased each other to nearly the exact same 2-second margin in the Varsity eight that they threw down 8 days ago on the Schuylkill. 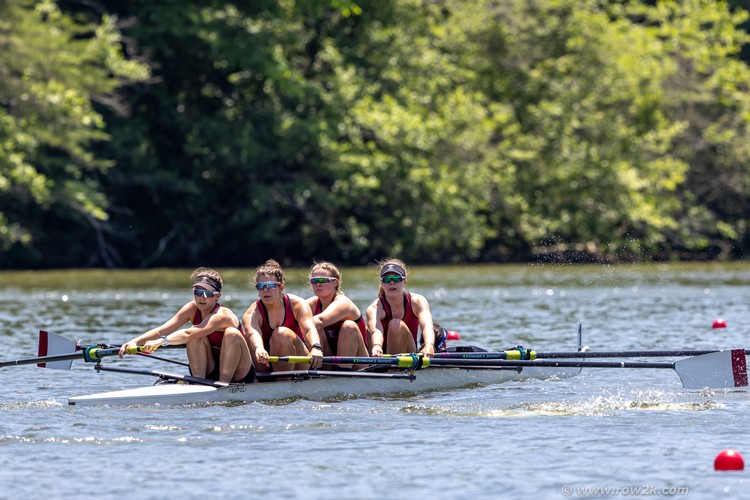 And some flipped scripts, as well, especially from UCLA: The Bruin men reversed some WIRA results against fellow left coasters in both the Varsity Eight (UC Irvine) and Novice Eight (Orange Coast), earning 2 medals along the way: a Varsity silver and Novice bronze. 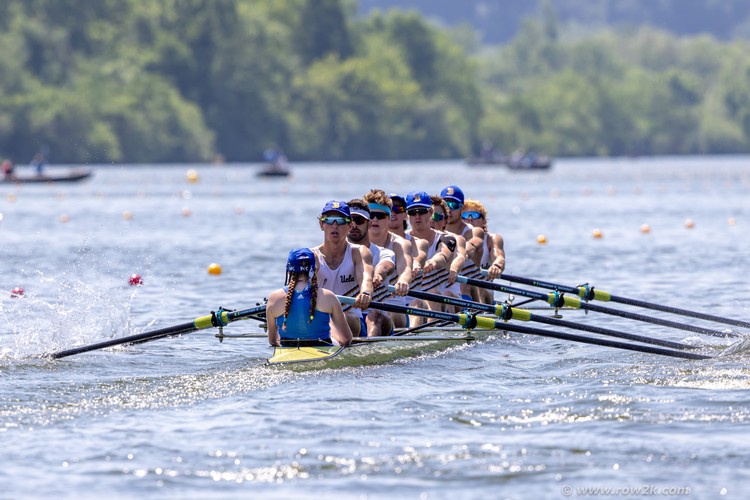 Michigan, which medaled in every Eights event with 4 silvers and that V8 bronze, won the Men's point title.

Purdue took both the Women's points title and was the winner of the newly christened John Bancheri Trophy as the Overall Points Champion. 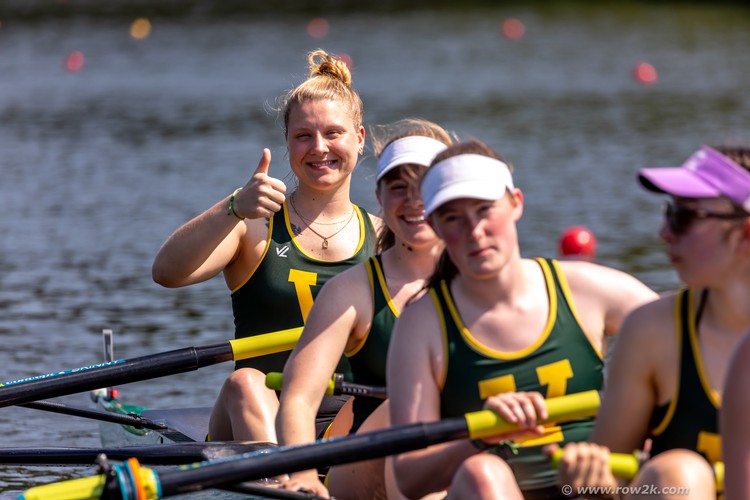 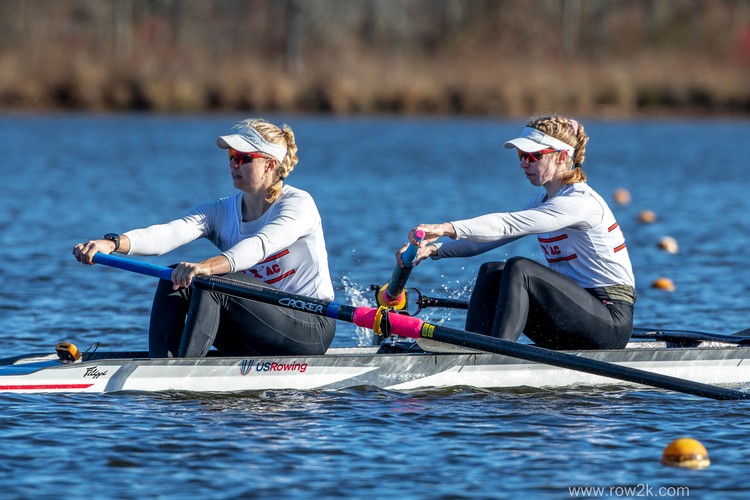 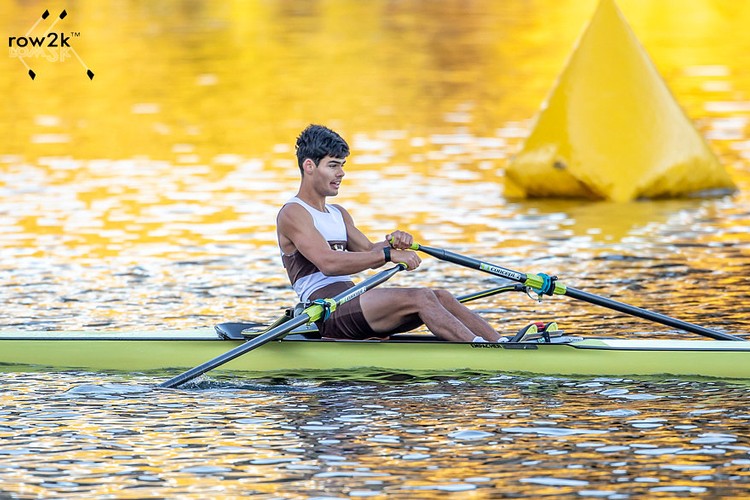 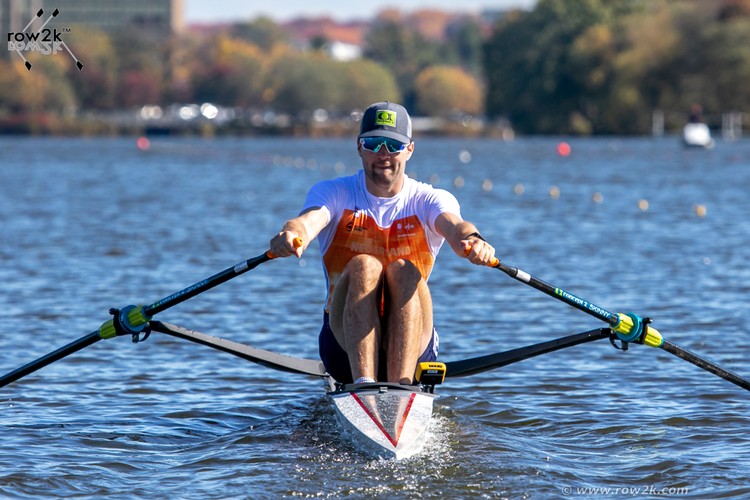 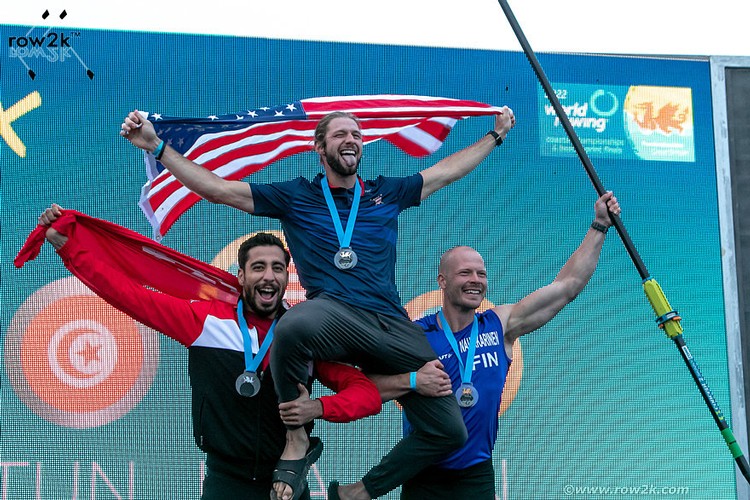