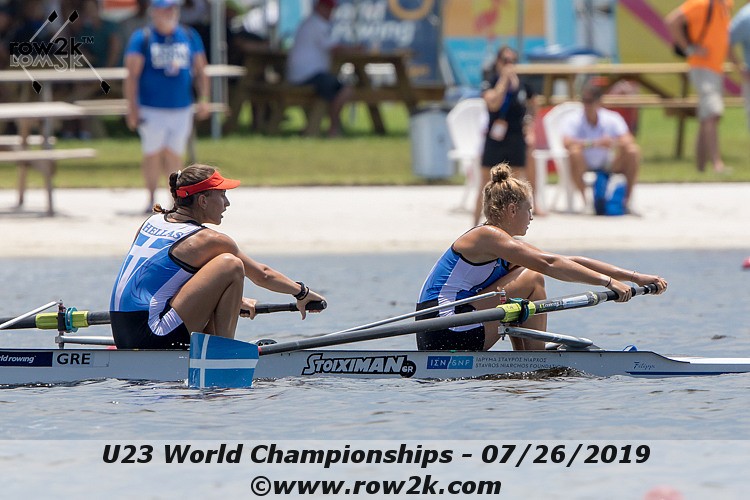 When you go to the starting line at 6am every day – and let it be the Sarasota starting line is among the best in the world for photographer working conditions - you sometimes see some strange happenings. This morning pre-dawn there was a flash of light as bright as any lightning – which unfortunately was a bit of a portent – but that was not lightning at all. We don't know what it was, but there were police in the area with flashing lights, so something was up.

It turned out dawn chasers could have slept in, as an hour before racing started all racing was postponed until 11:30am. While the rowers may have evacuated, the grounds crew kept cutting the grass – who care about rain and lightning when there is work to be done.

Well, sort of evacuated; media was evacuated to the finish tower, while many rowers just walked back to their hotels.

row2k spent some of the downtime betting against the market, setting up a camera with a filter and a timer to try to catch some lightning photos - no luck, just rain. When row2k got back up to the start, it was conspicuously less busy with photographers, a sure sign that finals are coming.

The coaching peloton remains interesting; during practice some coaches shout, others use radios, and some just film with their phone. The Brits win the award for the largest bike squad; we hope any who are heading to Jr Worlds next week don't learn the 'stay to the right' rule too well, as it could be embarrassing when they get to Japan, where driving (and riding) on the left is the standard practice. Meanwhile, one thing is for sure; the bike rental place is making bank.

Today someone in the Hungarian men's 8 gave out a woof when their country was called in polling, which was fun enough, but it was overheard that a photographer countryman of theirs made have gotten a bit too rambunctious at some point and may have had his credential revoked. Hoppá!

The crew of the day was undoubtedly the Greek women's pair that set a new U23 world's best time in their semi, beating the 2014 record by four seconds. Next would have to be the British men's quad that missed a new record by a second.

Racing resumes Saturday morning at (we hope) 9am.

The lightweight men's double of Luke Smith (Tampa, Fla.) and Alexandar Damjanovic (Alexandria, Va.) managed to clinch the final qualifying spot in the A/B semifinals, as the crew took third in their respective repechage.

"Going into these semifinals, we know all the crews we're going to be facing are fast and we really want to push them as much as possible," said Damjanovic.

"We're just trying to get better and better every time," said Smith. "We have relatively good endurance, so everytime we have another race, we have a little more of an advantage."

"So, just progress every race, get a little bit faster, hopefully surprise some people," Damjanovic said. "Traditionally, this event can be a hit or miss so we're looking to push that bound." 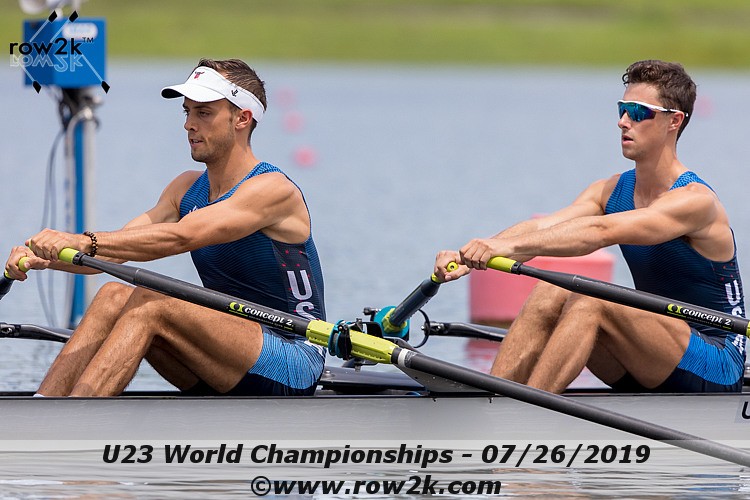 After finishing in 11th at last year's championships in the lightweight women's single, Brigid Kennedy (East Greenwich, R.I.) is now in contention for a medal in the event. Through the first 500 meters, Kennedy edged out in front of the field, holding that position until the sprint. Switzerland crossed the line just ahead of the U.S. sculler in 7:41.00. Kennedy took second in 7:42.40 and was followed by Hong Kong in 7:42.53. 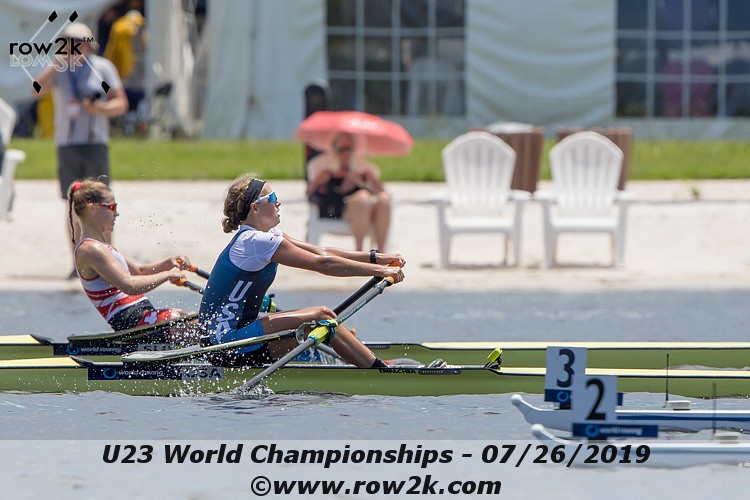 The women's pair of Hadley Irwin (Washington, D.C.) and Sarah Johanek (Cleveland, Ohio) also earned second in their respective A/B semifinal, advancing to the A final. The two clocked a 7:06.82, behind Greece, which set an under 23 world record in the category in 6:58.68. The crews will be joined by New Zealand in the final. 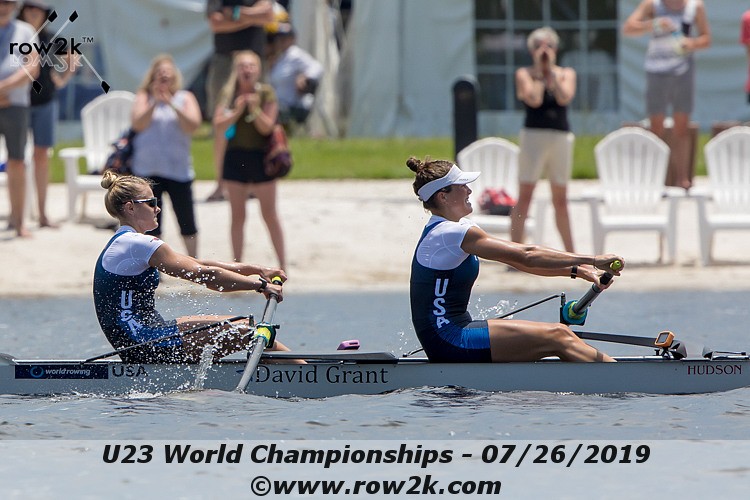 Taking third in their men's double repechage, was Cole Dorsey (Rowayton, Conn.) and Mark Couwenhoven (Parkton, Md.). The Americans battled with Norway through the core of the race, but ultimately crossed the line in 6:30.36, behind Norway's 6:27.96. Canada took first in 6:27.70 and will progress to the A/B semifinal alongside the U.S. and Norway. 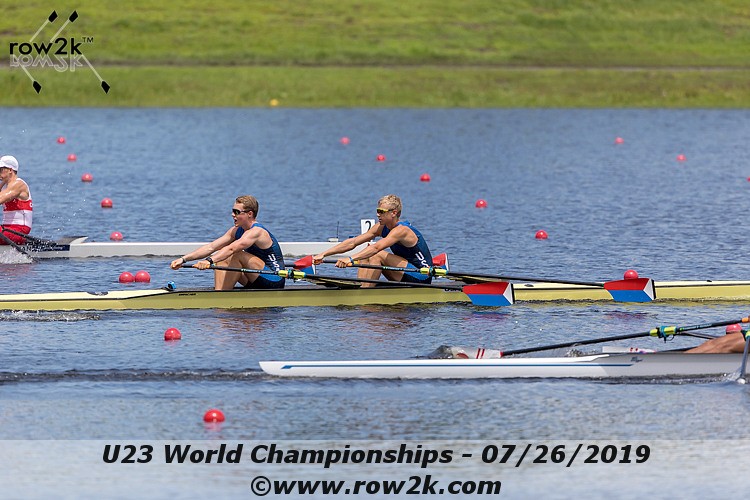 In the women's double repechage, the U.S. crew of Emily Delleman (Davenport, Iowa) and Elizabeth Sharis (Bettendorf, Iowa) clocked a 7:02.66 to take third. The pair will race in the B final for places 7-12. Australia won the repechage in 6:56.92.

After taking fourth in this morning's men's single quarterfinal and missing out on the A/B semifinal by less than three seconds, James Wright (Philadelphia, Pa.) raced in the C/D semifinals. Wright finished in 7:03.89, just 0.10 second behind second-place Algeria. Paraguay crossed the line first and will join the two in the C final.

Canada's eight U23 NextGen crews have battled heat, storms, and tight competition through the first three days of the 2019 World Rowing U23 Championships en route to securing semi-final and final berths.

Spencer Kielar (Guelph, ON) will race in the Lightweight Men's Single A/B semi-finals after improving on a second place finish in the heats with a 7:07.010 first place performance in the repechages.

"One of the things I'm focusing on that I think I did really well in the reps was my pacing," Kielar said on looking towards Saturday morning's race. "I'm [ready] to put out what I've got and give it my all."

Also competing in A/B semi-finals on Saturday morning is Tyler Adams (Victoria, BC) and Michael Bryenton (Peterborough, ON), who won the Men's Double repechage. 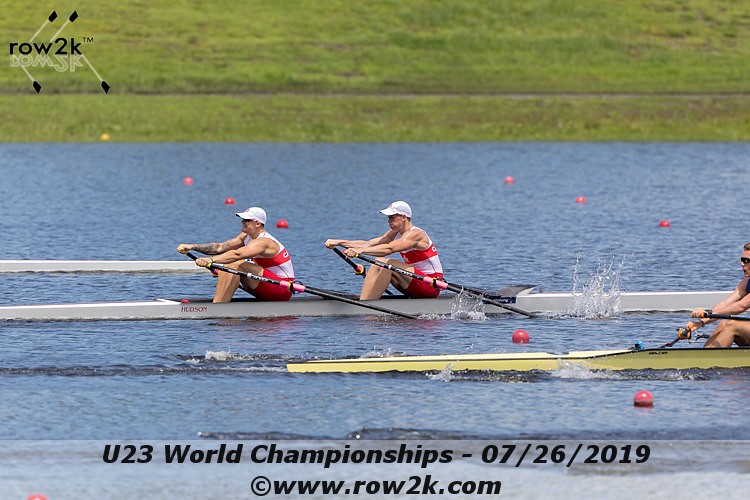 The Women's Four is progressing to the A final after coming second in their repechage behind Great Britain with a time of 6:47.030.

"We've had such an amazing team environment and boat environment and the summer has been really fun," said three seat Ivy Elling Quaintance (Victoria, BC). "One of our big goals of the summer was to first make the A final, so knowing that we achieved our first goal after so much hard work is really exciting."

"That's what we set out to do from the beginning of the regatta," continued stroke seat Isabel Ruby-Hill (Toronto, ON). "It's nice to have that and now we can just go into the A final trying our hardest knowing that we've already met one of our big goals."

Louise Munro (Ottawa, ON) brought Canada's Friday to a close by earning a spot in the Women's Single A final after a second place repechage finish.

The other Canadian team headed to an A final is the Women's Coxed Four. With just five entries in this event, their preliminary race served as a race for A final lanes. The crew finished fourth in the preliminary race with a time of 7:08.730.

Katie Clark (Cranbrook, BC) and Yara Ensminger (Oakville, ON) will race in the Women's Double B final after finishing third in the repechages behind Greece and China.

Racing continues on Saturday with A/B semi-final action, the Women's Quad B final and the Women's Coxed Four A final. The event wraps up on Sunday with the remaining A and B finals.

Women's Coxed Four (roster below) 4th in Prelim > A Final

Rowing New Zealand Press Release
Racing was again delayed on the third day of the 2019 World Rowing U23 Championships in Sarasota-Bradenton, United States after severe weather conditions remained. The women’s pair and men’s quad both raced today on a revised schedule, with each crew progressing to A Finals.

At the conclusion of racing, five of New Zealand’s eight crews are now contesting A Finals with two crews yet to contest A/B semi-finals. One crew has progressed to a B Final.

Ruby Willis and Grace Holland placed third in their women’s pair semi-final and move to the A Final.

George Howat, Ben Kirsop, Mark Taylor and Jonathan Kumarich placed third in their men’s quad semi-final and move to the A Final.