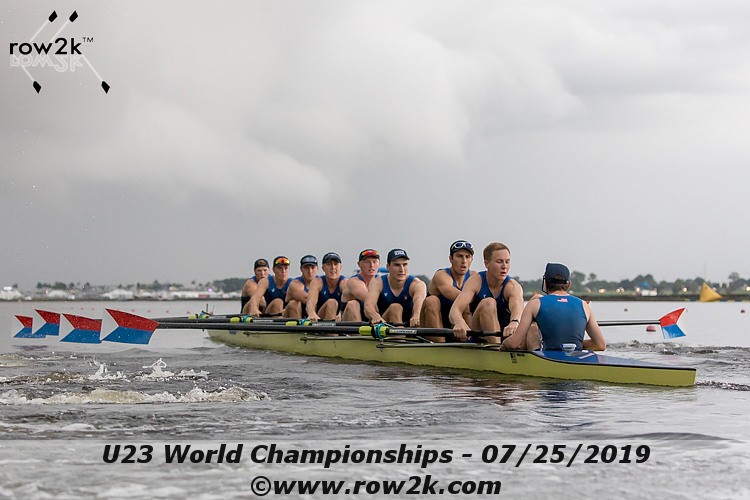 Day Two of the U23 World Championships required two sessions separated by a heap of weather delays, but by the end of the day most races were run successfully and safely.

row2k's Notes From the Course
Only the light women's pair was significantly affected by the weather delay. After getting all the heats done under mostly sunny skies, only the light women's pair preliminary race was left before the start of the reps. As the crews pulled into the start, the sun was still trying to punch through, but moments later thunder and lightning went off overhead, and an evacuation was called. . Realizing racing is the fastest way to the finish, the officials got the race underway and sent them off.

Unfortunately, the storm rolled in from the finish line, and with 250 to go they pulled them off the course and made them pull their boats up on the beach. The crews raced again when the regatta restarted at 2:30, with the US taking the win in their first and seven-eighths race of the regatta. 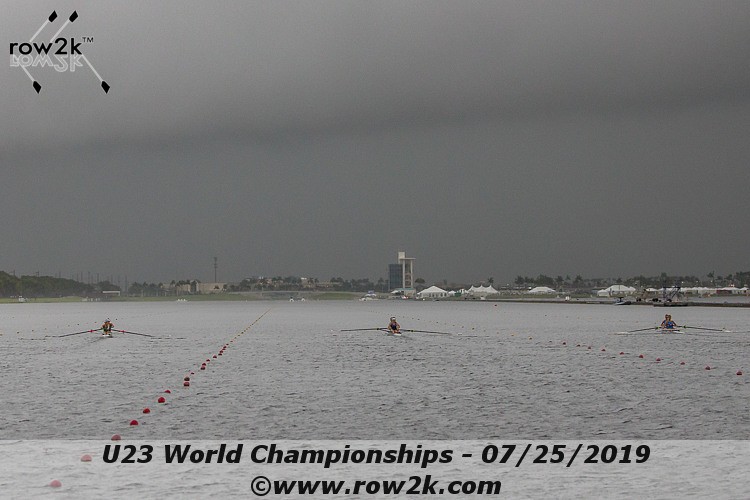 Light women's pairs on way to the 250m mark

Yesterday we wrote it was so far, so good, but row2k spoke a little too soon – and the media folks paid for it late in the day when the media center was evacuated.

With the morning starting time moved an hour earlier, some crews were a little behind schedule in their morning row, resulting in a quad and a four being given two minutes to get from the starting area to the finish and off the racecourse. Gold medal standard anyone?

As is often the case at international regattas, the men's eight heats were preceded by a stream of small boat heats, which are often quiet and almost intimate tableau at the starting line. Then the men's eights arrive, and it's pandemonium; shouting, slapping, oar shaking, gunwale banging. The U23s, led to some extent by the Brits, did not disappoint, albeit with an almost eerie quiet after the official two-minute call was made.

Blending in with the locals: the URU light mens 2x used Sarasota Crew oars for their race.

We learned that Bob Whitford can hold his breath for an impressively long time when he went underwater to work on the racecourse today.

USRowing Press Release: Four More U.S. Crews Advance on Day Two at World Rowing Under 23 Championships
Team USA's lightweight women's double sculls and men's eight directly advanced to the A finals through their respective heats on the second day of racing at the 2019 World Rowing Under 23 Championships. Additionally, the men's four with coxswain and lightweight men's pair advanced to the A finals from their respective repechages.

After 12 crews started their championship racing on Wednesday, eight more crews saw their first action today. One of those crews was the lightweight women's double sculls, which placed second in its heat with a 7:09.52, seeding them in Sunday's A final.

"Either way, if we were going to the repechages or just going to the final, we would give it our all, but now we have another day to rest and recover to get ready for the final on Sunday," said Grace Joyce, who rows in the double with Liza Ray.

Having a race-free Wednesday before today had a motivational impact on the crew.

"Everyone's been so supportive this summer," said Ray. "[There are] just so much good vibes."

Ray understands the magnitude of racing for Team USA.

"It means showing the world all the work we've been doing the past eight years training," said Ray. "Everything has lead up to it. This is it." 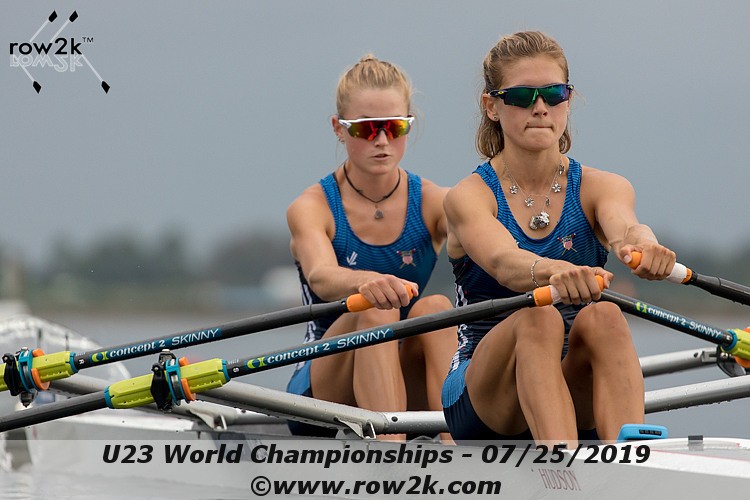 Denmark won the lightweight women's double sculls heat that included the U.S. with a time of 7:07.82.

In the women's double sculls, the U.S. crew of Emily Delleman (Davenport, Iowa) and Elizabeth Sharis (Bettendorf, Iowa) came in second with a 7:13.22, just 0.59 seconds ahead of the Canadians. The Americans were beat out by Germany, which rowed a 7:10.22. The U.S. will race in the repechages tomorrow, as only the winner of that heat automatically advanced to the final.

The men's double sculls of Cole Dorsey (Rowayton, Conn.) and Mark Couwenhoven (Parkton, Md.) finished fourth in its race with a time of 6:38.57 and will race in the repechages. Russia won the heat in 6:28.26, followed by Great Britain and the Netherlands, which finished in 6:31.51 and 6:34.87, respectively.

The lightweight men's double sculls of Luke Smith (Tampa, Fla.) and Alexandar Damjanovic (Alexandria, Va.) came in fourth and will advance to the repechages. The two finished in 6:43.53 behind the first-place German crew, which finished in 6:24.36. Australia finished second in 6:30.65 and Portugal crossed the line third in 6:33.28.

Repechages were held in seven race categories to determine which crews would be moving on in the competition for medals.

The men's four with coxswain finished its repechage fourth in a time of 6:15.07, earning a spot in the A final. The other crews from its repechage moving on to the A final are Great Britain, New Zealand and South Africa, which finished in 6:12.79, 6:13.53 and 6:14.32, respectively. Adam Gold (Seattle, Wash.) coxes the boat rowed by Eli Maesner (Redmond, Wash.), Peter Chatain (Winnetka, Ill.), Evan Olson (Bothell, Wash.) and Nikita Lilichenko (Orinda, Calif.).

The lightweight men's pair of Collin Hay (Shrewsbury, Mass.) and Matthew Marchiony (Weston, Mass.) saw a second-place finish in a time of 6:53.46 and earned a spot in the A final. Germany took first in 6:49.92.

The men's four of Liam Corrigan (Old Lyme, Conn.), George Esau (Long Lake, Minn.), David Bridges (Portland, Ore.), and Thomas Beck (Sandy, Utah) finished third in a time of 6:03.02, earning a spot in the B final. The other crews from its repechage moving onto the A final are Germany and Romania, which finished in 5:59.04 and 6:00.13, respectively.

In the men's pair, Mark Levinson (San Francisco, Calif.) and Daniel Perez (Fort Lauderdale, Fla.) finished in fourth with a 6:51.21, earning themselves a spot in the B final. The crews moving onto the A final from that repechage are South Africa and Great Britain, which finished in 6:34.66 and 6:36.11, respectively.

The women's quadruple sculls of Hannah Paynter (Lyme, Conn.), Arianna Lee (Folsom, Calif.), Camille VanderMeer (Elmira, N.Y.), and Katy Flynn (Churchville, N.Y.) finished fourth in a time of 6:45.44, earning a spot in the B final. The other crews from its repechage moving onto the A final are Romania and New Zealand, which finished in 6:30.93 and 6:36.48, respectively.

The men's quadruple sculls of Thomas Johnson (Centreville, Va.), Samuel Gatsos (New York, N.Y.), Jack Reid (Deerfield, N.H.), and Nathan Phelps (Ridgefield, Conn.) finished in a time of 6:03.41, which landed the crew in fourth place, wrapping up its racing at the 2019 World Rowing Under 23 Championships. The crews moving on to the A/B semifinal from that repechage are Hungary, New Zealand and Poland, which finished in 5:55.31, 5.56.28 and 6:00.37, respectively.

Four exhibition races were held today to determine lane assignments for the finals in those events.

In the lightweight women's pair, the U.S. crew of Emily Molins (Wilmette, Ill.) and Sarah Maietta (Wayland, Mass.), finished in first place with a time of 7:31.71, earning the most favorable lane placement in the finals. Germany finished behind the two in 7:34.82, then Australia in 7:37.77.

The U.S. crew of Michael Wilson (Braintree, Mass.), Kieran Edwards (Arcata, Calif.), Jarrett Heflin (Wayzata, Minn.), and Edward "Cooper" Tuckerman (Bozeman, Mont.) finished in fifth with a time of 6:10.08 in the lightweight men's quadruple sculls. The fastest time in the exhibition race came from Ireland, which rowed a 6:02.20.

Racing is scheduled kick off tomorrow with quarterfinals at 9:00 a.m., repechages at 9:20 a.m. and semifinals at 10:18 a.m. Saturday's racing is highlighted by the remaining semifinals and races for medals in 10 boat categories. Finals in the other 12 events will take place on Sunday.

At the conclusion of racing, three of New Zealand's eight crews have progressed to A Finals with an additional crew progressing to a semi-final. Three further crews will contest A/B semi-finals, and one crew has progressed to a B Final.

Laura Glen, Katherine Lush, Kathryn Glen and Veronica Wall placed second in their women's quad repechage and move to the A Final.

Jemma James, Grace Watson, Cat Layburn and Charlotte Spence placed third in the women's four repechage and move to the B Final.

Jack Lopas and Ollie Maclean placed first in their heat of the men's double scull with the fastest overall qualifying time, and move to the A/B semi-final.

Isaac Everitt and Chris Stockley placed second in their lightweight men's double scull heat and move to the A/B semi-final.