Germany, GB, the US and the Netherlands contest the Canal Cup

In somewhat of an upset, the USA Men's Eight shook off an early deficit to world champs Germany and worlds bronze medallists Great Britain to pass both crews and win the 18th running of the SH Netz Canal Cup going away. It was the US's first win since 2006, and only the fifth time that Germany has not won the event. GB was third and the Netherlands was fourth.

The 12.7km regatta, which bills itself as the 'hardest rowing regatta in the world,' is the traditional post-worlds romper room for the world's elite sweep-rowing men. Taking place over three days in Rendsburg, in northern Germany, the regatta puts the four invited crews through a 500m erg sprint on Friday, a 400m sprint in eights on Saturday, and culminates on Sunday afternoon with the 12.7k piece, which is run off starting blocks like a sprint race.

Off the start of the 12k, the US fell into fourth early, then overhauled the Dutch crew as the German and GB eights got into a pitched battle ahead of the field, throwing power moves at each other for much of the first 3000 meters. Nearing the halfway point of the race, the US crew then made what looked like a dramatic lane shift behind the two lead crews, opting to row a longer line into clear water in the middle of the channel, and then, when the GB started to falter, the US turned on the jets outside, passed the GB crew, then kept on going and overhauled the Germans enroute to the win.

"We were behind the British and the German eights early, so I just made the decision to get out, get some clear water, and keep it really internal," said US coxswain Julian Venonsky. "That really set us up for the second half of the piece."

"Julian is a phenomenal coxswain," said bow seat Alex Karwoski. "I can't specifically point to one call but I would say that when he steered wide to stay in the clean water away from the Germans and the British turned out to be a very smart maneuver."

Karwoski, Peszek, Reed, DiSanto and Venonsky all raced in the eight that finished 4th in Plovdiv a week previously, and were joined by Richards and Clougher from the USA M4-, Bobby Moffitt, who raced in the USA M4- in 2017, and Arne Landboe, who was in the world champion USA U23 eight earlier this summer. 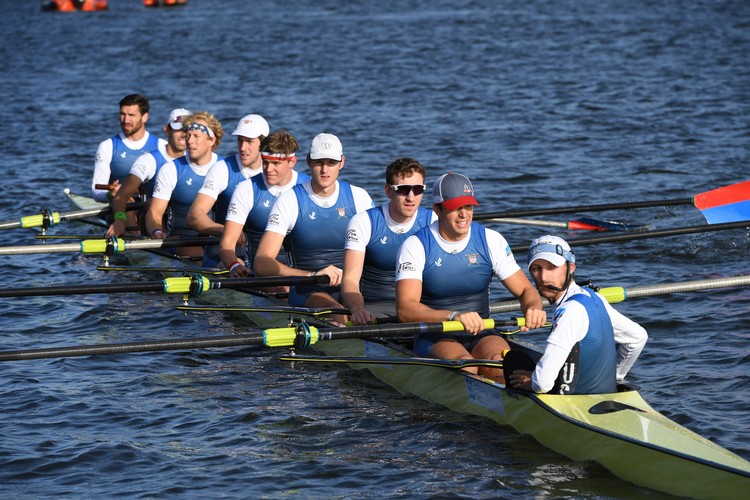 The US Crew in Germany

Despite not spending a lot of time together, the crew gelled quickly. According to three-seat Tom Peszek, subpar results in the erg sprint and 400m sprint competitions earlier in the weekend didn't dampen the group's spirits.

"We came here with a laser focus on performing in the final event," said Peszek. "So, it wasn't too difficult for us to shake off the disappointing results, we just gathered ourselves together and got ready to attack the next race."

"All it took was trust: trust in our rowing, our coxswain, and our base rhythm," said Peszek. "The thinking before the race was that we wanted to get out strong, but know that our goal was to win for 12.7km. I couldn't tell you how we did it, as I really don't remember much of anything past 5km in. All I remember is the guys in front of me keeping a tenacious rhythm for a very long time!"

The win was the icing on the cake for what has traditionally been a popular regatta weekend. "The SH Netz Cup is always a blast," said Karwoski. "Winning or losing, the people hosting, the weekend, and the entire event are top notch."

The Germans, at any rate, were gracious in defeat. "You just have to respect it, the USA had the better rhythm today. Those guys were really strong today," said German M8+ rower Max Planer.

That said, the Germans don't lose this regatta often, and it took the commentators a few minutes to catch up mid-race. During the TV feed, after the US had taken open water on the German eight, the race camera panned, slowly, from the leading USA to the trailing German crew.

"Well, the good news is," said the live TV announcer, "that our eight is still rowing better than the Americans." 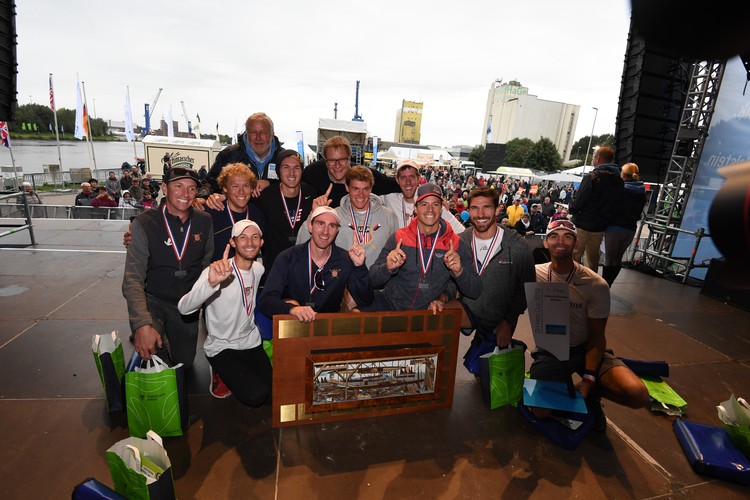 The victorious US 8+
back to top
Regatta & Event Coverage Features