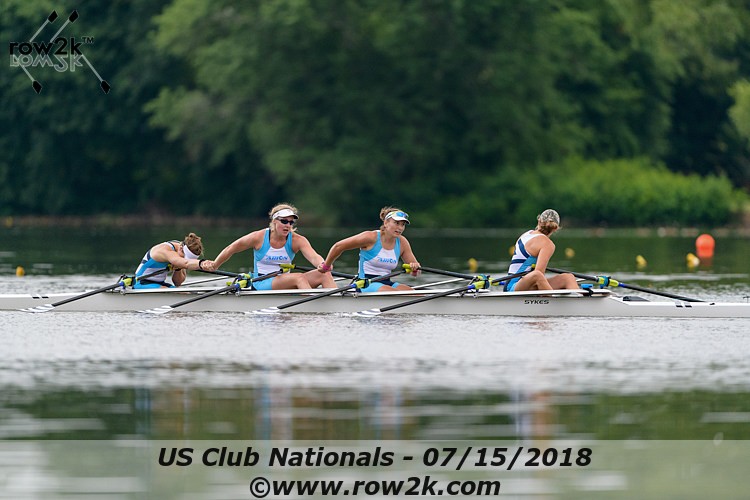 While the Sunday finals at Club Nationals started with the coolest temperatures for the entire regatta, it also brought rain and a mild electrical storm at the lunch break. While athletes, coaches and boat reps made their way to Wegmans buffet and their respective hotel suites, regatta officials announced a brief delay in racing to give all those exhausted young athletes another hour to snooze in air conditioning.

Before the delay, ARION Rowing of Saratoga Springs, NY, placed 1-2 in the Intermediate 4x with a a winning quad included the freshly-minted U23 Double of Ashley Johnson and Sydney Michalak as well as Lauren Schall and Lauren Miller. ARION, which is an acronym for Advanced Rowing Initiative of the Northeast, also had the second-place crew and an overall positive vibe.

"We only raced in this combination of the quad once before heading out here; we mix up quads and doubles every day," said Johnson. "It ended up being an inter-club battle; it wasn't stressful, it was like practice...we get along really well as a team," said Lauren Miller, a graduate of the Minnesota rowing program. "We were behind at the 1k, it ended up being a middle-heavy race," said a member of the quad. The ARION crew walked on their teammates in the back half of the race and kept pushing it to the finish line.

"It's summer racing, time to relax, and we've thrown line-ups together the day of the race" said Lauren Schall, a University of Pittsburgh grad who has coached at Pitt for three years and sat in bow of the Intermediate quad. "We are really excited to be at practice every day," says Michalak. "We are having the summer of our lives, we get on the water and do the work. We are all here for exactly the same reason."

They all noted in different ways that they are intensely competitive (one described them as "hyper-competitive crazy people"), but have fun doing it, referring to "battle paddle" practices. They all spoke in the uni-mind: "we have a lot of drive and ambition," but the fun they have was hard to miss; it was impossible to pass Sydney Michalak in her travels around the Cooper River Park without a smile on her face. The former club rower at University of New Hampshire will be rowing on the World stage within weeks, she wears it well.

The crew is coached by Sam Warren (who is an assistant coach at Columbia) and Eric Catalano (who also coaches the Saratoga girls), and the program also has three athletes at Senior Quad Selection Camp now. ARION is a three-year old program and yes, their moniker looks very similar to AVIRON, French for rowing and is not a coincidence that ARION is also a swift mythical horse fathered by Poseidon, giving a nod to the equine tradition of Saratoga Springs, NY.

The most difficult part for many of these crews, from clubs, to Development Camps to regional High-Performance programs, was managing multiple races a day for five days, with most days at close to 90 degrees and 90% humidity. On Friday, row2k spoke to Ethan Curren, who coaches the U17 athletes at the women's High-Performance Camp in New London, CT. Curren noted that a lot of the success of crews at a multiple-day regatta with time trials, semis and finals is managing the heat and hydration.

"It's really important that they are thinking about their hydration when they are going down the course many times," he said. "They have to judge where they are, and have a high level of situational awareness."

Curren brought one eight to the event, then split it up to a four and a quad, with the four earning gold and the eight and quad earning silvers. "The overall average speed of these athletes gets faster and faster in the three years since I've started coaching," says Curren, who is currently Director of Rowing at Genesee Waterways in Rochester, NY.

The Junior (U19) Women's National Team had already taken shape, if not specific seats, by the time they arrived in Camden. After spending weeks training in the early summer in New London at the US Coast Guard boathouse, the young women who came to Club Nationals know they have a seat or one of the two spare spots on the team, explained Bill Manning, one of the coaches of the Selection Camp. The camp rowers claimed every podium spot in the Intermediate 4+, second and third in the Intermediate Pair, first in the Intermediate 8+, then took the lunch break and raced again in the Senior 8+ (silver), Senior 4+ (silver) a 4- (gold, by almost 20 seconds), and Senior 2- (silver and bronze). Head Coach Liz Trond, Brian Ebke, Bill Manning and Marko Serafimovski had the squad working the entire time, part of preparation for International competition. 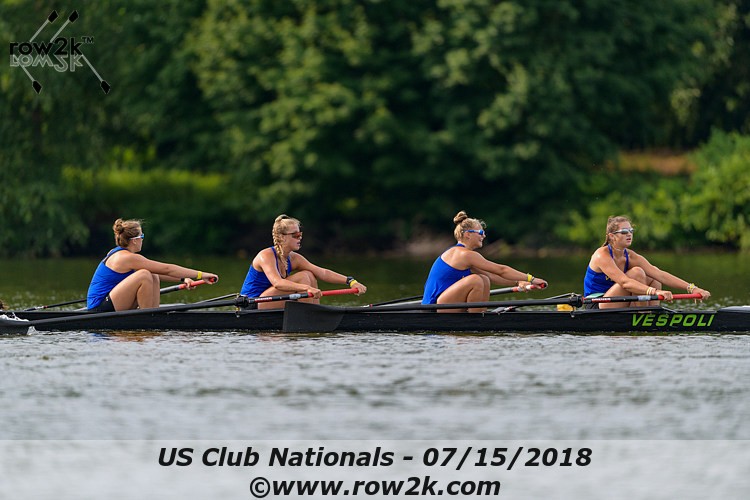 "We are always trying to get faster combinations," Ebke said between races. "These girls are excited to be on the team, eager, and have a great attitude," he explains. "We talk to them about proper training, hydration, nutrition – and staying in the AC," he adds. A few of that squad were racing four times on finals day (Intermediate and Senior-level races at 18 years old), which is grueling even when it's not 90% humidity.

Across the country in Ashland, Oregon, Rick Brown has been running a U19 Men's Development Program for 10 years at Rogue Rowing (the camp was at Three Rivers Rowing in Pittsburgh for seven years before following him to Oregon).

"We had ID camps in the Spring; we brought 70 guys but have U17 and U18 High Performance in the same location," says Brown. "So far we have had 11 boats medal," he said (later the same day the Senior 4- earned a bronze). "Our main focus is to develop for future years, and being prepared at a race," he explains. "We had guys Friday that rowed 4-5 times, and it's a learning curve. It's about nutrition, hydration, rest. We had four weeks to prepare for this."

"The biggest difference between the camp and regular season is that every stroke has to be your best stroke," says Quinn Joseph Regan of the Ashland High Performance Camp. "The competitiveness of the camp is like college when you have to fight for the boat you want to be in," His boatmate Gus Nordmeyer said that "we are doing and learning the same behaviors that elite athletes are doing; every part of our life in Oregon is about maximizing performance."

As an "unofficial" (not part of US Rowing Development or High-Performance program) training location, ARION had one of the most effective regattas of any club. The men's program there is in its nascency, but still had winners in the Lightweight Intermediate Double with Ben Hopkins and Alex Loy, and the Senior Double with Saratoga Rowing Alums (and Cornell and Brown grads respectively) Ryan Allen and Liam Casey. ARION is experiencing rapid growth in its two-three year existence, and finding homes for athletes during the Saratoga (horse) racing season has been one of the many challenges. 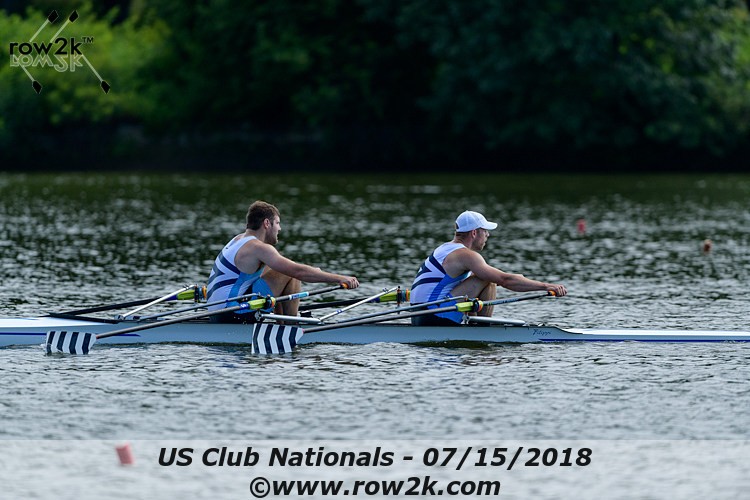 "We want to make sure we have the right coach to athlete ratio, and have to make sure we have the resources to do it right," says Eric Catalano. "Our goal is to push athletes toward the Olympics," he adds, referring to National Team athletes and whether they come back to ARION to train. At this writing, two of the ARION athletes were chosen for the Worlds Quad in Plovdiv, Bulgaria.

After the storms clear and the sun came out, things heated up again, with thick humidity for athletes who had been racing for days. As Men's U19 High Performance Camp team member Noah Axford said, "we had to perform uncomfortably." That about sums it up, good bye from Cooper River Park!