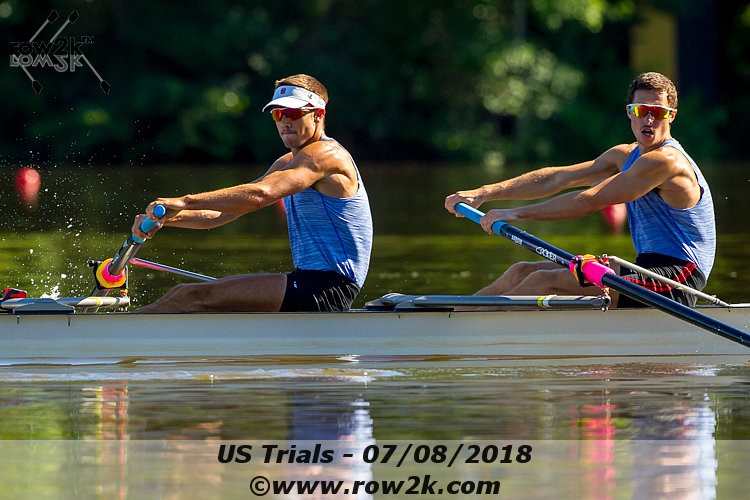 U23 Lightweight pair of Luke Smith and Alex Damjanovic

When the U23 Lightweight pair of Luke Smith and Alex Damjanovic hit a fishing boat at 1500 meters on the course during the time trials and crushed their bow, they were determined not to let it bother them.

"We had to keep focused," said Damjanovic. The rising junior at Colgate said that the pair had to develop a "level of maturity for the competition at Worlds." The Fairness Committee decided to let the crew move to finals, and they had the opportunity to demonstrate their collective level of cool.

"We were last from the start--which is typical for us," said Smith, stroke and fellow Colgate rising junior. By the 500, the pair was in first.

"We kept calm - it's easy to lose your cool in a pair, and this was the first time we raced a fully buoyed course… we hit a few near the sprint," said Damjanovic. The pair uses a fixed rudder and will be spending the time back in NY between now and Worlds adjusting toe/foot steering.

Say the lean lightweights, "we are powered by Muesli and eggs…" On to Poland and bring your Bob's Red Mill. They will return to Hamilton, NY to train with Head Coach Kahled Sanad.

In the lightweight women's single, Michelle Sechser, defending bronzemedalist in the LW Double at Worlds in 2017, kept her bow ahead. The race was in striking distance for Christine Cavallo for most of the race, but Sechser pressed when Cavallo pressed and just didn't let the pass happen. 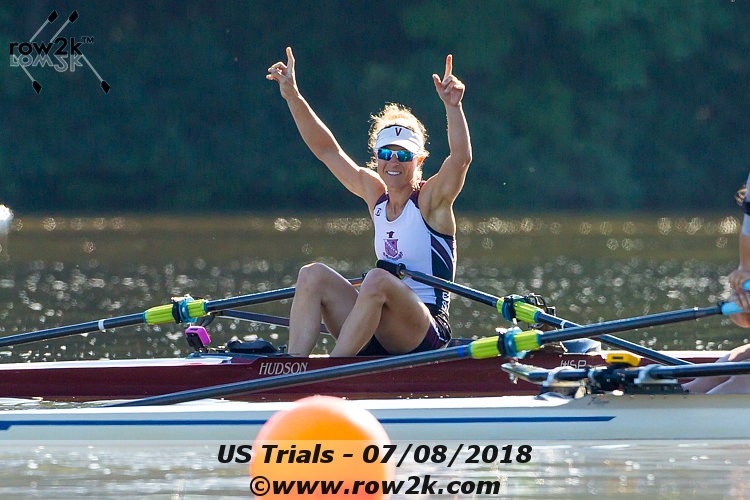 Michelle Sechser after her win

Andrew Campbell won the lightweight men's single after taking a year off, winning decisively by 12 seconds. Campbell was in the double in the Olympics in 2016, and has been racing at National-level races since he was in high school at New Canaan (Youth Nationals, Junior Worlds, U23 Worlds, Senior Worlds, Olympics…. his resume is several pages long by now).

The U23 men's pair of Aidan Bridwell and Louie Pratt provided one of the closer races of the day, besting Weeks and Robertson of Seattle Area. The pair row for Northeastern during the collegiate year and are doing their summer training at Henderson Training Camp at Northeastern's Boston boathouse. Henderson also brought the third-place crew of Newton and Cone for the pair.

"We had a good start, and got in to a nice rhythm," said Bridwell. "We were ahead early in the race and just held lead. We blasted off the start and we know we have a good base, but the sprint was a little tense. It was definitely one of my hardest races ever. We were at a 39 which is at the high end of our stroke rate." They won by 2 seconds. 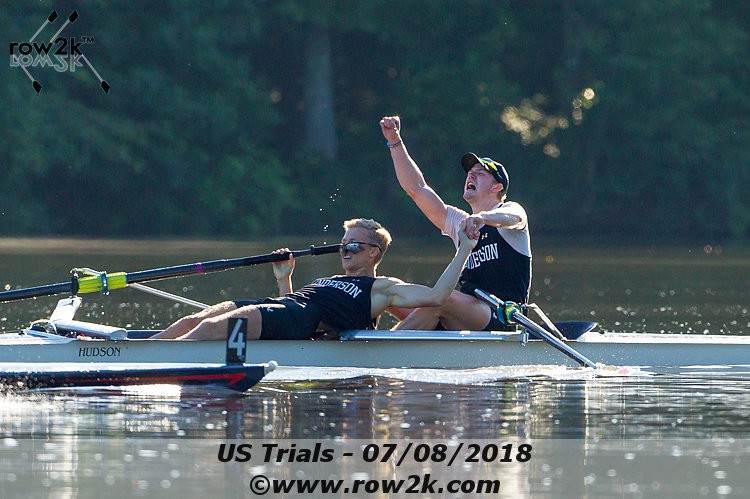 U23 men's pair of Aidan Bridwell and Louie Pratt

Bridwell said that he had raced at Canadian Henley with one of the guys who was pressing them at the finish today. "He's tough so we knew we had to row hard to keep ahead when they sprinted."

Hallie Smith of Medstar Paralympic Training Center in Washington, DC won the Para Arms-Trunk event today by a solid margin. Smith had raced onternationally at Sarasota for 2017 Worlds, but she is "excited to race in another country," she said. 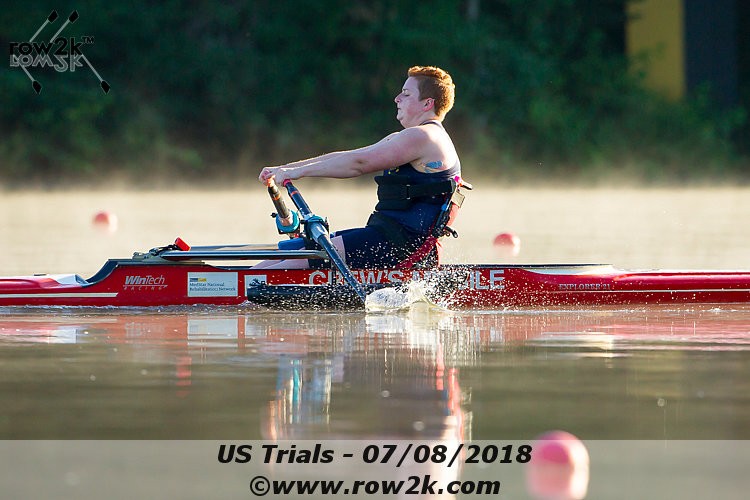 Smith, who now has a coach who focuses on strength and cross training, says she will continue her schedule of training on four times a week on the water, and two days or either erg or cross training. Smith, who had a lead throughout the race says, that "it's always a challenge - I was ahead but I always push to get ahead even more. Taylor (Roberts) is a good competitor." Smith has been watching video of competitors from other countries in preparation. She is bringing a large cheering section to Bulgaria, including her brother, a Weapons Systems Officer, and some of his squadron.

An interesting twist for Michalak is that she is going to follow her pair-partner's path and row a year at Syracuse while in graduate school. "I'm going to have the opportunity to row in a Division I program, and there is a new coach," she says. Luke McGee, formerly of both Washington University and US Rowing, takes over in NY for the next season. 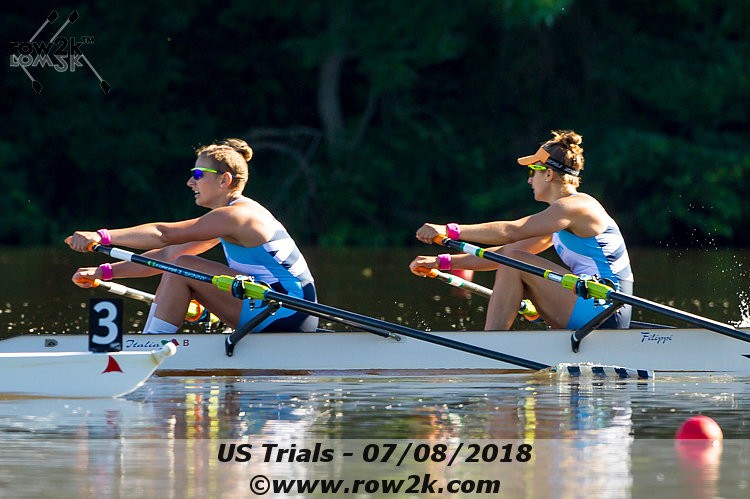 U23 Women's Double of Ashley Johnson and Sydney Michalak

"The race was awesome," Johnson said. "In the time trials we had the second fastest time, and in the semi's we were the fastest, but this race was stressful. We were stroke for stroke most of the way."

"The biggest focus for us is to stay internal, and I think we executed it pretty well; after the 500 we settled into base and just trusted our training," says Michalak. "We raced here last year with Craftsbury and we didn't make finals." Michalak notes that the 2017 U23 Trials were her first race as a sculler. Regarding their success this year versus last, "It's really just experience more than anything." To extend their experience and training, the duo will be heading back to Saratoga to train until leaving for Poznan.

Ben Davison had a uniquely superb trials, winning both the U23 Single and the Senior Double with John Graves. Davison, a Washington University rising junior, bested Junior Worlds 2017 Champion Clark Dean, an incoming Harvard freshman. An hour later, he got in a boat for a semi with John Graves for another race on the way to finals Sunday.

On Sunday, the double of Keen and Frid from Penn AC pressed Davison and Graves hard but couldn't get past them. "We had good competition from Penn AC, and we're excited to have the double be the sole focus," said Graves about Sunday's final.

"My plan is to race World Cup 3 in Lucerne, stay in Europe until I race U23's in Poland, then go back to Craftsbury to train until Worlds," said Davison after racing Saturday. "We have a full month at Craftsbury before Worlds to focus on the double, with the big goal of making the finals." 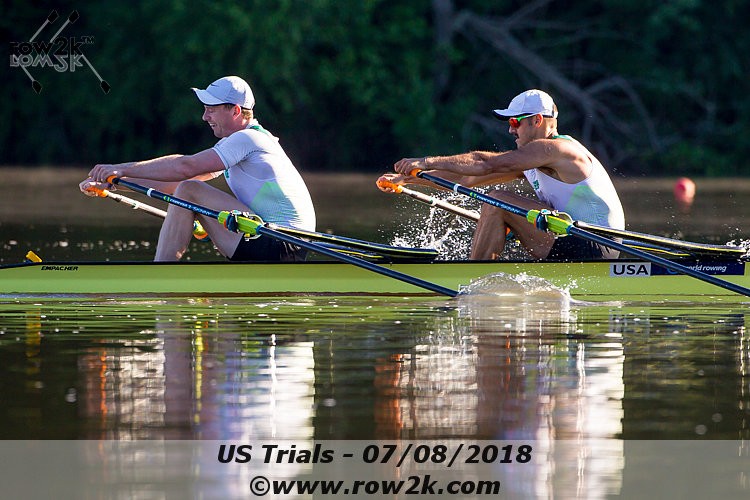 Davison and Graves in the M2x

"We are starting to evolve a little with how we treat our bodies," Graves said. "Ben is incredibly gifted - he's just 21 - and is just starting to see how everything works with training, diet, treating his body better. I'm 30 and I looking at recovery time, diet, just awareness; in many ways I'm just passing down what I have learned over the years," added Graves. 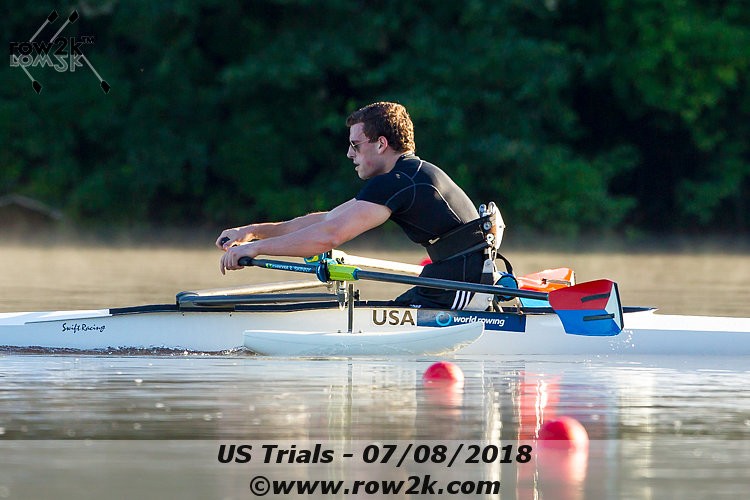 A few 2016 Olympians locked up spots for 2018; sculler Blake Haxton won the Para men's single; 2016 Paralympian Laura Goodkind and two-time Paralympian Ron Harvey won the double; and the women's double was won by the 2016 Olympic A finalist and 2017 World silver medalists Ellen Tomek and Megan O'Leary, who are racking up an impressive number of US unis between them. 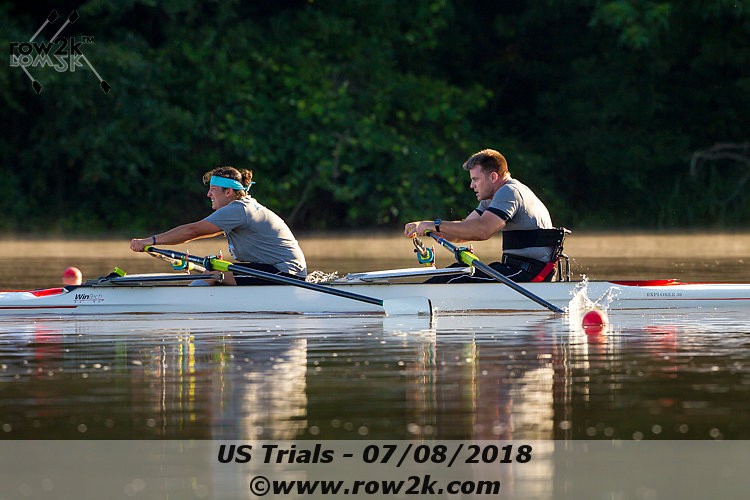 Next stops for today's crews are Poznan, Poland, at the end of July for the U23's in and Plovdiv, Bulgaria, in September for the Senior Worlds. 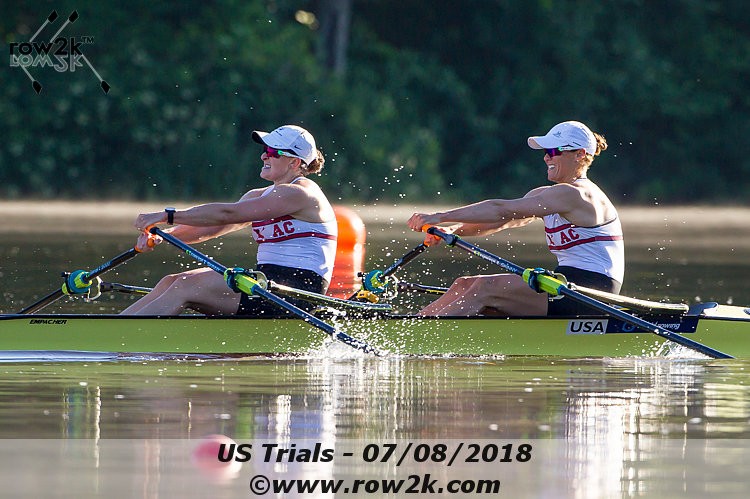 Tomek and O'Leary in the W2x 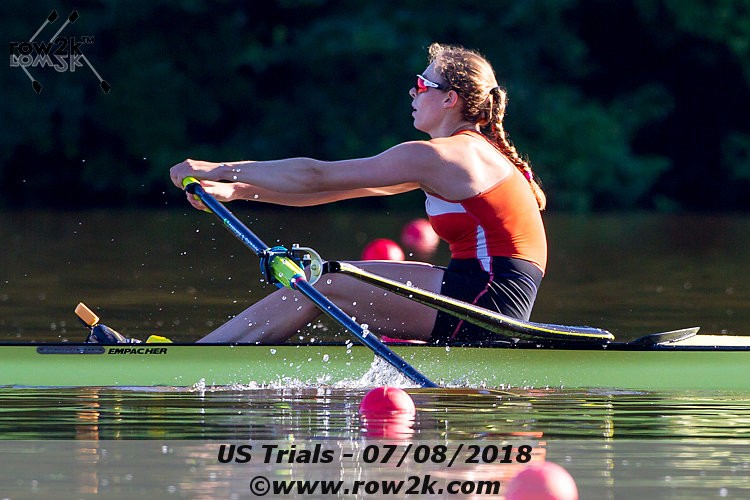