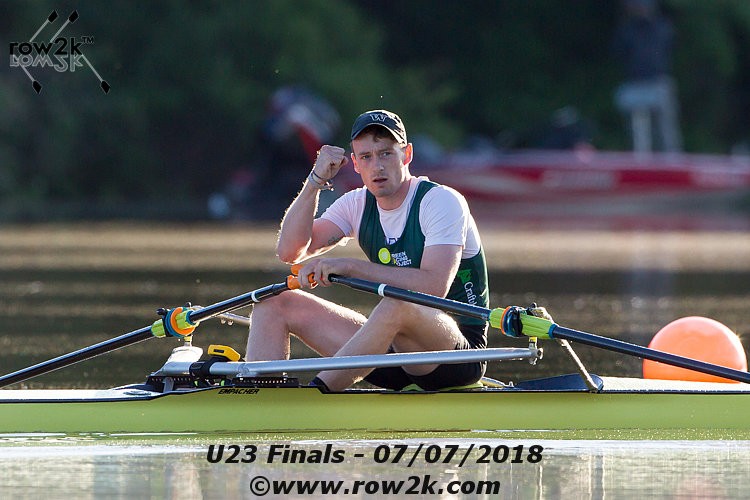 The U23 crews at National Trials woke up to a beautiful finals racing day, and for six crews, the sunny skies brought sunny news: a berth at the 2018 U23 Worlds in Poznan, Poland.

Ben Davison was the first of the morning to earn his spot on the U23 team in the single. "It’s a bit tricky handling both races (he is also vying for the Senior double in the finals with John Graves tomorrow)," he said. "It’s hard not to go out and race every one," he explains.

Davison’s next move, of course, depends on the double tomorrow. His first step is to head to World Cup 3. He will stay in Europe, race the U23’s, go back to Craftsbury to train more, then back to Worlds…hypothetically. As for Green Mountain Racing Project, he says, "It’s fantastic, they really look after us; we are very well supported, I don’t have to think about much."

Davison mentions that everything from healthy foods to testing blood lactate levels are part of the life in tranquil Vermont.

Another Craftsbury crew in the U23 Worlds will be Evan Dwinell and Joshua Bilchik in the U23 Men's Double. The crew, taking a break from Dartmouth and Bates sweep programs respectively to hone their sculling technique, bested their Green Mountain sparring partners, Thomas Johnson and Mats Terwisch. Slightly bittersweet, but also what their training is all about, yes? 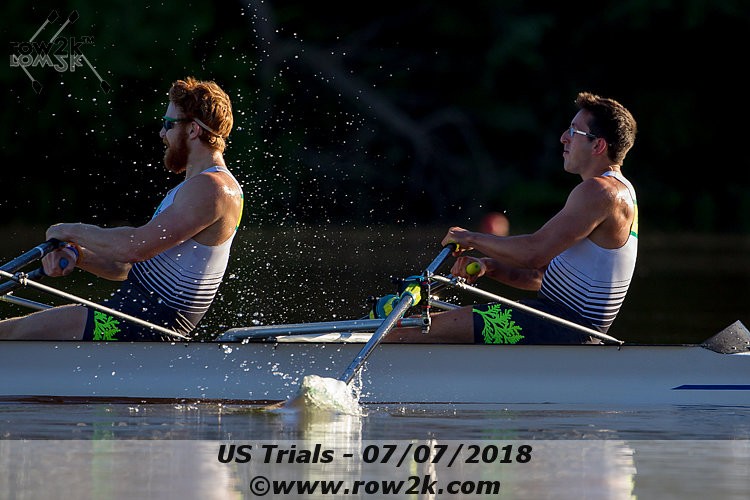 "We piece against them all the time," said Bilchik. The duo was down at the 1k, and they made a simple call to "go," which was all they needed to slowly inch up and put their bow in striking distance. At the last 250 Bilchik made a call to "break them" which may sound a little harsh, but the results got them to Worlds.

The pair of Regina Salmons (Penn '18) and Alina Hagstrom (Oregon State '19) in the U23 Women's Pair have been the "chosen ones" in the U23 pair selection process, but it was a title won the hard way: seat racing. "There is high expectation with this crew," says Coach Brett Gorman. "There is still a lot of work to do, but this crew has a balanced relationship; a lot of strengths but different strengths." 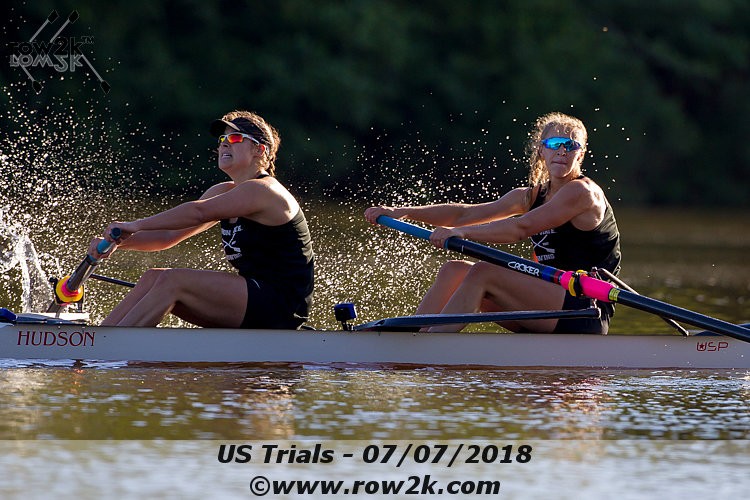 When you press the two athletes to identify their strengths, it is a random assortment of stroke rating, race vibe, general demeanor, and dental hygiene habits, but in the final analysis, Alina is a tad more chill, and Regina is an oversized coxswain with considerable wattage. Says Salmons, "I think we’re kinda' yin and yang." It seems to work for them, and it's on to Poland.

In the Lightweight Women’s 2x, two west coasters came to Boston to train, and then to Princeton to dominate. "We went to lightweight quad camp at UBC in Boston, and we found each other at the camp," says Sophia Denison-Johnson, she adds, "To be around other lightweights - we make each other better." Says her partner Isabella Garcia-Camargo, "It was great to bring some speed to Boston." 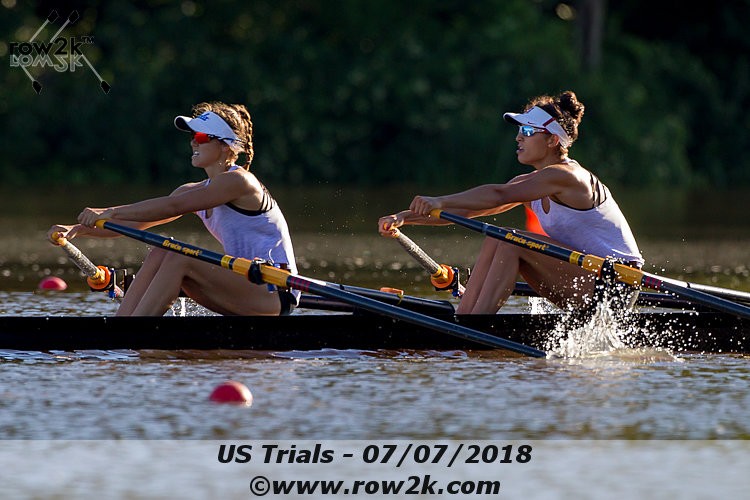 They both identify a generalized difference in the training experience from the two coasts, and Denison-Johnson calls the west coast style "rough and rowdy." Those free spirits will be heading on to race on the big stage in less than two weeks.

The Lightweight Men’s U23 double was the final of the morning, won by split seconds by Artym Hayda and Thomas (Toby) Satterthwaite. "We blasted it off the start," says Hayda, a Georgetown rising senior. The crew raced and trained together at Narragansett Rowing Club in their high school years, and won Youth Nationals in the double in 2016. Satterthwaite, a Harvard sophomore, is the calmer energy in the boat, but went along with the higher rating set by Hayda to stay in a competitive race. The crew knew they weren’t the fastest time from the time trails, so they "started hard and raced hard" for this final. Satterthwaite was a member of the U19 National team last year, and now he is "stepping it up to a new level." 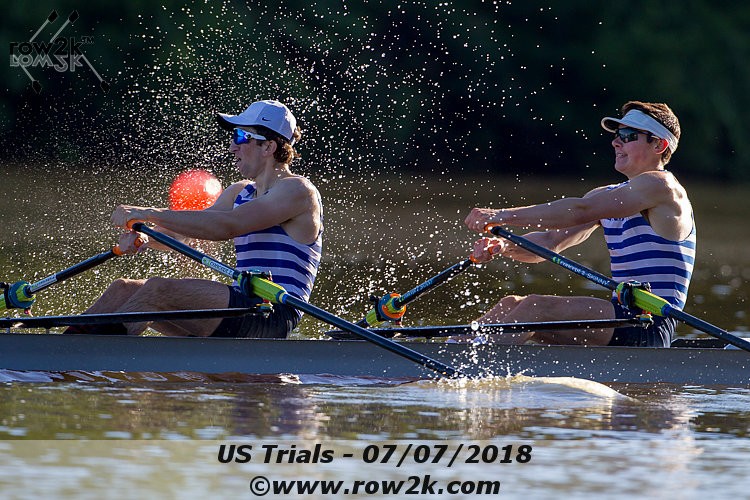 The Lightweight Women’s Pair is a new boat class for World Rowing U23’s, and the winners were a Caroline O’Brien and Sarah Maietta. The race is a slog for the heavyweight men, so impressive to see the lightweights bringing it on for 2000 meters in the headwinds today. 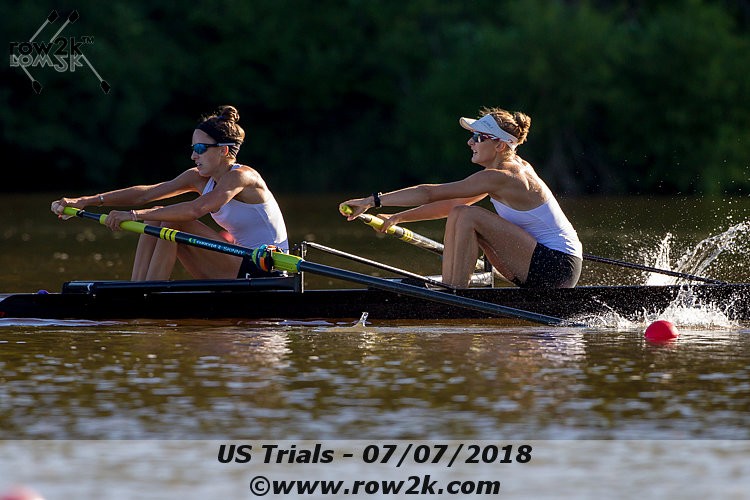 Tomorrow brings more U23 finals as well as Para and Senior events; stay tuned for more interviews and news.