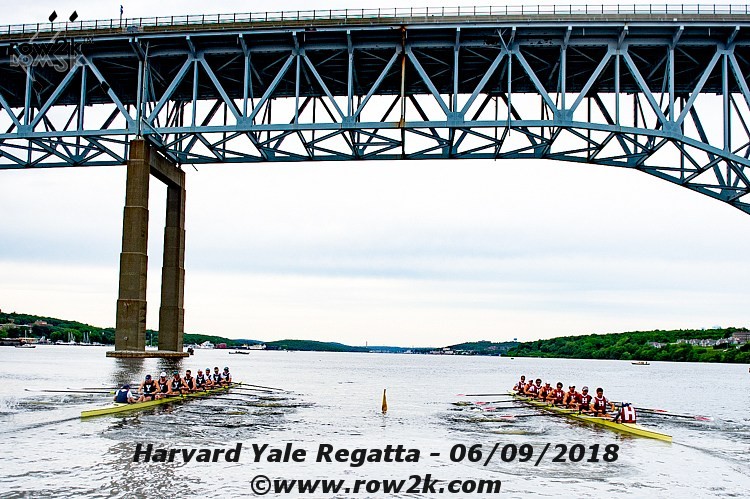 Start of the Harvard-Yale varsity race

Moments after stepping off the medal stand at the IRA National Championship, Yale senior Sholto Carnegie started thinking about the next race.

Not the race that might happen at the international level with the British national team, if his goals of returning home to race for Great Britain are fulfilled this summer, but the one that was set to happen seven short days away - the four-miler against Harvard University.

That race has been on Carnegie's mind since the beginning of his last year as a Yale undergraduate, the same as it has for every athlete that rows at either of the two participating universities.

And the same way it has been on the minds of every Harvard or Yale rower that has come before him for the last 153-years. An IRA national championship is one event - a huge one for sure - and winning it for the second season in a row was celebration worthy for Carnegie.

Still, it was a celebration he had to remind himself to take, given there was one more race left. 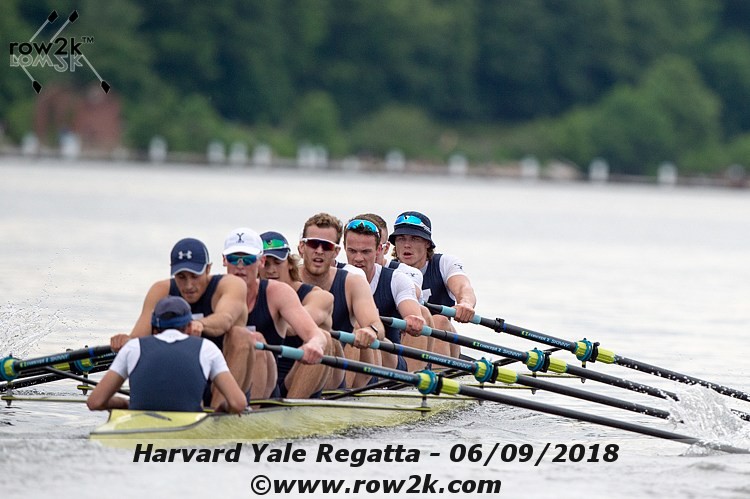 "I started thinking about this race as soon as I got off the medal dock last Saturday," Carnegie said. "And then I changed my mindset to take in the moment of the IRA national title, because that was important, and I knew it was important.

"So, I reminded myself to relax, to spend some time listening to some music, and hanging out with my friends, and then to just gradually build back up."

But, Carnegie is quick to point out that "The Race," as it has come to be called, was never very far from his thoughts, because he knows that even a National Championship year can become slightly less special if the Harvard-Yale regatta four miler is lost at the end.

But it was not.

For the second consecutive season, Yale University completed a triple sweep of the three most important races of the season, a win at Eastern Sprints, an IRA Championship, and the final race that results in a betting shirt taken in front of the Yale boathouse at Gales Ferry, a place that for the last weeks of every spring season takes on a sort of mystical energy.

"This is the hardest race of the year," said Yale senior Paul Jacquot. "Getting back up after IRA is difficult. There is definitely a physical stress that comes with the IRA, and there is also the mental stress of hyping up for that big nationals race, and you just want to come back and kind of decompress, blow off some stream.

"But you can't because you've got a big race. Today we came on top and it's really huge for us."

And it is the same every time, for whichever team wins because it's all part of the tradition of rowing at either Harvard or Yale.

Every year, the two rowing programs make camp in one of two boathouses located on the Thames River near New London, Connecticut, beginning training for what is recognized as the oldest intercollegiate sports event in existence.

The Harvard athletes move into a house near a boathouse named Red Top, just upriver from the Yale Boathouse at Gale's Ferry. They stay for however long each team has between the end of the school semester and the final sprint race of the year, and then come to train and wait for the schedule to be set by the Atlantic tide.

Four races are run, the first on the eve of the main event in a race once reserved for 3V/2F combination, but which now is for fourth varsity boat athletes. That race is followed the next day by three more races of progressive length. The third varsity rows two miles, the second varsity goes for three, and the varsity races four.

Harvard's top boat, which finished fourth at last week's IRA, fell behind from the start and could never catch up. 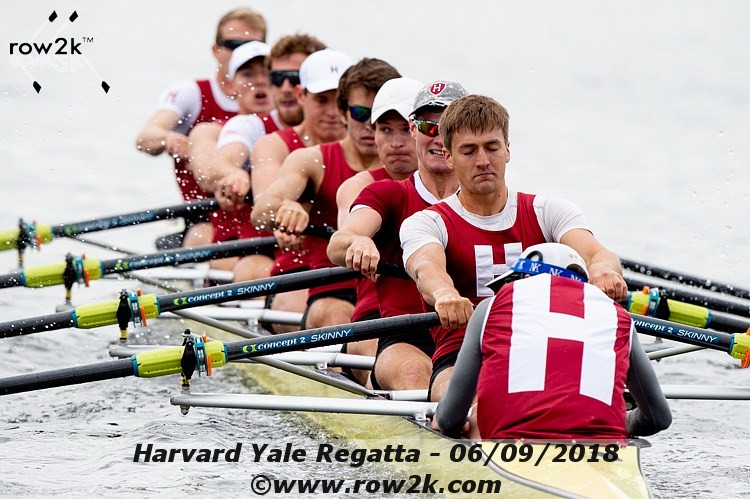 For rowers from both schools, the Harvard-Yale Regatta is considered the most important event of the year, just as it is for the alumni who run the two camps. They come back every year, see that the race is organized, that boat traffic on the river is halted for the time it takes to run the regatta, and to set up the food and beverage tents for the post regatta celebrations.

And - of course - to pass along the historic significance of the event.

"I think what happens is you get here, and you're in a different place," said Rob Welhoelter (Yale '99'). "You're not on your college campus anymore, you're at a place that is dedicated for this one event and there are plenty of ghosts just kind of walking around reminding you that this has gone on 153 times before. 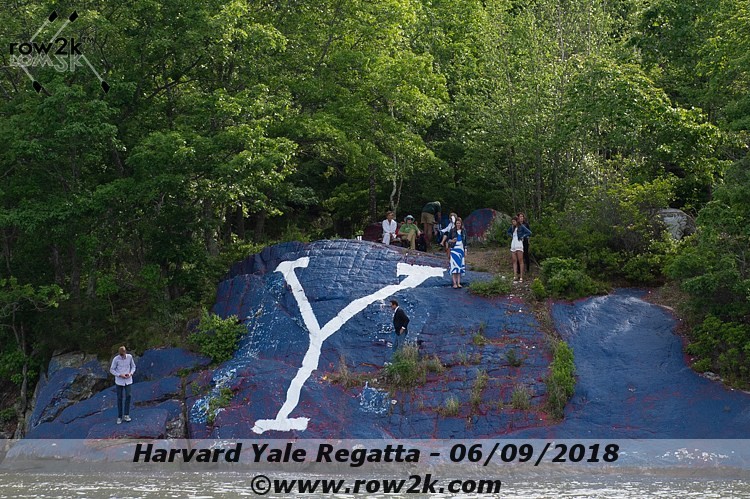 The 'Rock' in the traditional colors of the combi boat victors

"So that history gets into you, and the idea that there is this dedicated piece of property that both schools have just for the purpose of this one event gets into you. It's a vestige of what came before and it remains a unique part of the draw to come to these schools," he said.

"I think for Harvard and Yale, place is important. And there is something for both camps where you come down here and you enter a different world, a zone that is a very special place. And it takes the place of any other zone you happen to be in. It just takes over, and if you have been here, at least once, you pick up on where you left off," Bancroft said.

"In this zone, the rest of the world disappears for however many days you are here."

In this case, for both schools the pre-race camps were set just seven short days ago.

"The progress of this week really sets the mindset of how important this is," said Carnegie. "A few days before, the tents go up, then the alumni start coming back, other coaches from the league start coming to watch our practices, and it really reminds you of what it means to race in this amazing historic event," he said.

And, win or lose, the affection for Gales Ferry is felt by all the participating athletes.

"Red Top is a very special place for us, especially the seniors," said Harvard senior Sam Hardy. "It's a chance for all the boys to get together. We've got a great group here, and it's just been a great year.

"It's hard to make that turnaround from the IRA, but it is the same for everyone," Hardy said. "The race was well fought. We have a very strong team and we gave it our all. I'm proud to have rowed with these guys. I would not want to be any other place today than right here." 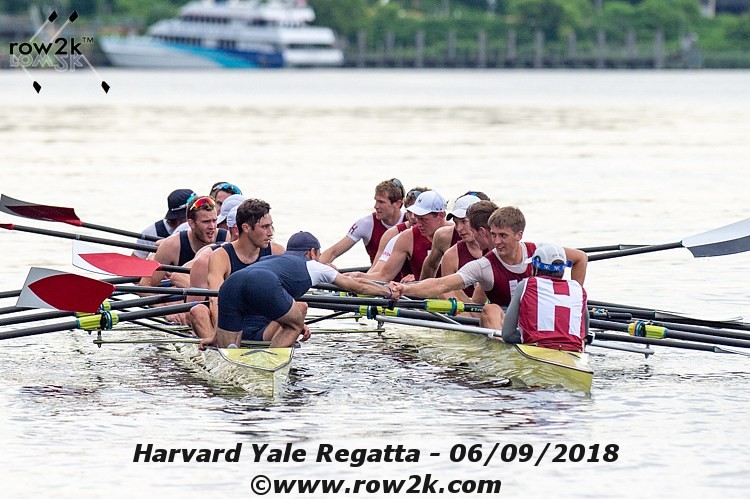