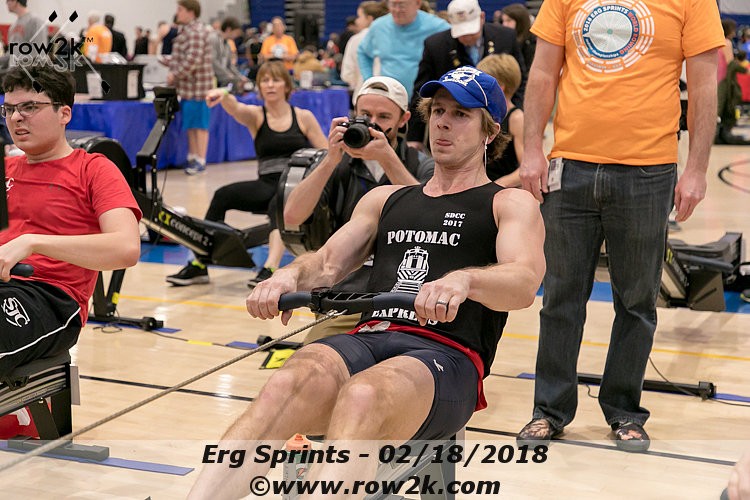 Clements at the beginning of his event

At 33, Peter Clements figured his chances of setting a record on the ergometer in a sprint race were slipping away as age, fatherhood, and his professional career began taking over the most important columns of his life.

That didn't mean the Potomac Boat Club master was about to give up on the idea of leaving his name in the records books for a rowing event. But he knew doing that was going to take a little longer, and by that he meant longer distance records, like half marathon and full marathon events.

In 2017 Clements hit his goal and set the American record in the half marathon for 30-39-year-old heavyweight men at 1:12:55.1. In training for the piece last year, Clements did long rows, some equal to the marathon distance.

Which got him to thinking about doing the full marathon Sunday at the 2018 Erg Sprints | World Rowing Indoor Championship in Alexandria, Virginia. row2k went looking for Clements after he won the event in 2:35:52.2, holding an average split of 1:50.8. But with a five-week old baby at home, Clements got out of the T.C. Williams High School gym before he could answer any questions.

On Tuesday, row2k caught up with Clements by phone to find out what he did to train, how he handled the piece, and how it all felt when it ended.

row2k - How did you decide to enter the erg marathon event and what where your goals?

And so, the past two years, I tried to go for the half marathon record, and last year I got it. So, I have that record on Concept2. In order to train for that, because that is an hour and thirteen minutes, I had to do a lot of crazy long rows, just to prepare for it. I was doing 30k here and there, and even marathons every once in a while, at a reduced pace, like three hour rows basically.

I never got anywhere near where the marathon record was, but it was getting faster and faster and I thought there were only so many people willing to do that, so I kind of wanted to see how fast I could push that one. I raced it last year at Erg Sprints and I got a 1:51.3 (average pace) and I thought I could improve on that this year, and I did.

row2k - How did you train for the marathon?

Peter Clements - When I'm doing the long and low easy stuff, I'm listening to audio books. If you get a good one, it's kind of motivating to get another session in because you want to find out what happens next, in say Hamilton for example, and then I supplement it with a lot of running. I do a couple of (running) marathons as well, so there is a little bit of cross training to take the edge off of all that erg volume.

row2k - How did you handle the piece Sunday, what did you do to get through the time it took, what was your overall plan?

Peter Clements - For sure I had a playlist set up, I had music going. I had about three hours' worth of stuff. What's nice is that in a marathon you're going to be at a low rating, so I was at a 20 to 24, and so you can kind of reach up and skip a song in between strokes if you really have to.

But you also have to factor in things like eating and drinking and just refueling. So, just because I had done long stuff before, I had gotten both pretty well down to a system where I had a power bar split into thirds, and I had squirt bottle with Gatorade, and every 6K I would have as big a gulp as I could take without missing more than one stroke. That was kind of key to keeping the rhythm up because, again, you're going long and low, and up until the end you're trying to not to kill yourself and trying to be smart. But if you miss a couple of strokes, and you see that split go in the wrong direction, that's tough.

row2k - What was it like near the end of the piece?

Peter Clements - Well, when I got toward the end and near the last 2K, I tried to bring it up and I just didn't have it. If I was in third gear all the time, I just couldn't get into fourth. So, I just thought OK, and I tried to shift up and drop it down, but that was not happening. So, I just stayed smart until the last minute or so and then just basically sprinted. If I went 1:50 for two-and-a half hours, I was going 1:30 in the sprint. And that is all the variation I saw.

row2k - How did you feel when it was over?

Peter Clements - I was wiped, obviously. Compared to a running marathon, and the impact and everything, it is nowhere near the same animal. But, my knuckles hurt, I had some chafing, some spots around the seams on my thighs that were rubbed a little bit raw, but nothing crazy. I was just out of sugar. I was out of fuel and ready to take a nap. 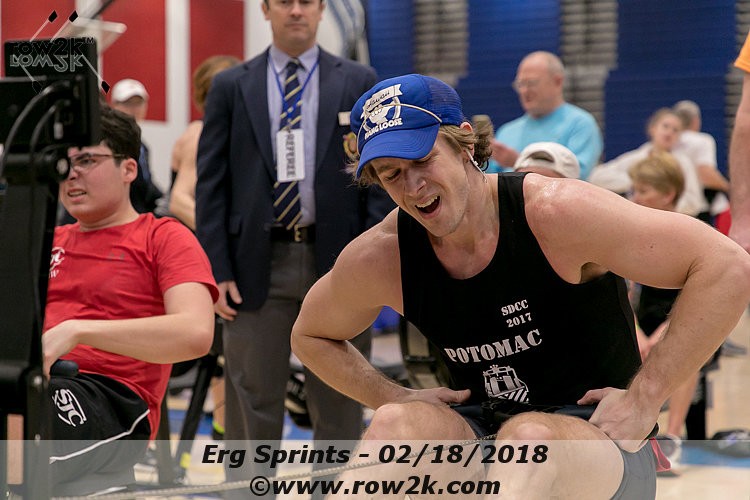 And at the end