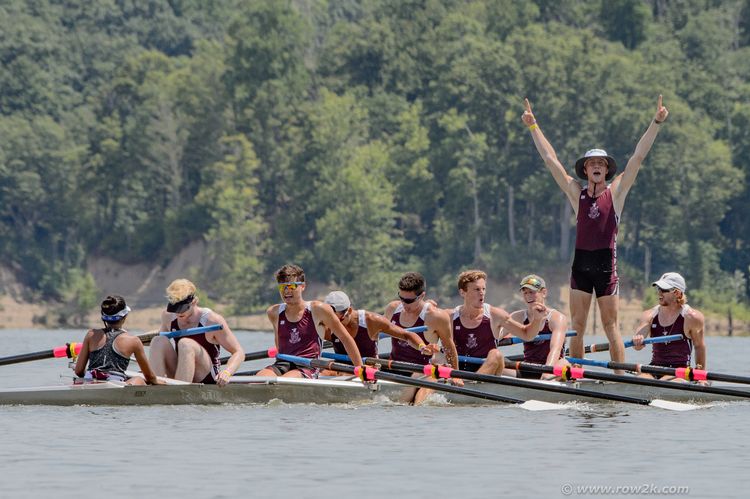 Five days of racing and the men's points trophy hinged on the very last event of the 2017 USRowing Club National Championships Sunday. New York Athletic Club and Vesper Boat Club were dead even in total points as the last race of the week went to the line,leaving it to the elite/senior lightweight men's eights from each club to decide the final placing.

And, both teams knew that gold medals were not the only thing on the line.

"Our coach Trevor had mentioned it right before we launched, so we knew it was definitely important to win this race," said Nicolas Pereira, who was rowing in seven seat and was feeling the stress of already having raced six times since the regatta began on Lake Harsha in Bethel, Ohio, Wednesday.

NYAC was not about to let anything go easily, and both boats battled into an early lead over the rest of the field and raced closely until Vesper grabbed what ended up being about a four-second advantage and crossed the line first.

"We were just thinking get out fast, get up and stay up," said Pereira. "That was our goal today and we achieved that. It was amazing. Everyone feels great. I was so appreciative of the guys in this boat helping me get down this course."

And so ended the five-day mega summer rowing festival that has grown in size and numbers steadily over the last five years and now includes elite racing and the first race in the inaugural U.S. Lotman Challenge, a three-race series sponsored by the Philadelphia Gold Challenge Cup Foundation.

The two other events in the challenge include the Head of the Charles and the Head of the Schuylkill, and carries a cash award of potentially up to $9,000 in prize money for the sculler with the most points at the conclusion of the event on Philadelphia's Schuylkill River.

In total, 73 national championships were won this week at club nationals, 37 Sunday and 36 Friday. Of those, Vesper's lightweight squad took seven - and Pereira won four. "It was a pretty good week," he said.

A good week for sure, agreed his coach Trevor Michelson. "I've got a great group of guys here. One of our group couldn't attend because he had a death in the family. We were disappointed with that. But we had a junior fill in for us and the guys stayed composed. We've been doing a lot of miles in small boats and it just kind of worked out," Michelson said. 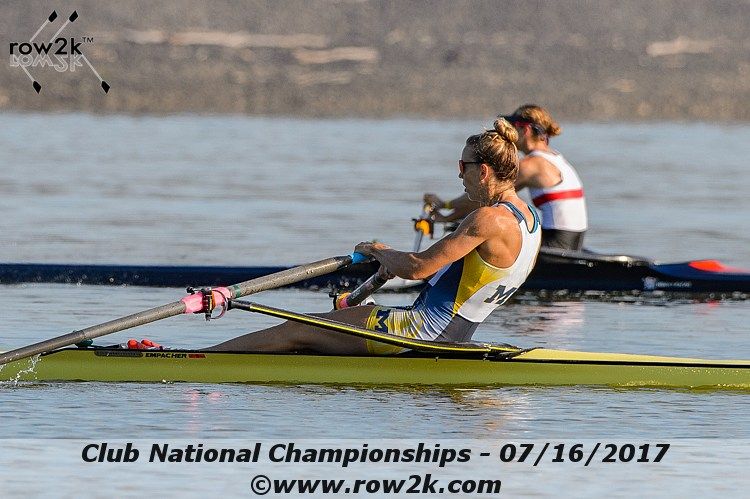 Elite scullers have been rowing in the club nationals off and on since the regatta has been run. The elite events have been moved into their own separate regatta and then back into clubs before depending on the numbers of entries from season to season.

But even when club nationals did include elite scullers, they were almost always aspiring Olympians. Sunday was different.

On the start line for the final day of racing in the women's elite single - which is now part of the Lotman Challenge - were four Olympians, including 2012 bronze medalist in the women's quad, Kara Kohler, who was representing the California Rowing Club; 2016 Olympians Meghan O'Leary and Ellen Tomek, representing Vesper; and The Foundry's Felice Mueller.

Mueller won the event, followed by Kohler in second, Tomek in third, and O'Leary in fourth. All four women are planning to row in the U.S. world championship trials next month and were using the regatta both as a training event and as a way earn expense money.

"Having something like the Lotman Challenge is really amazing," said Tomek. "U.S. sculling, especially if you are in the single, is challenging. Last quad, Meghan and I were on our own a lot and having to get support from outside the club, our family and friends.

"Having this opportunity to come and race and prove that you have the talent and then get rewarded for that financially is something that is unheard of in the U.S., at least since I can remember.

"It's really amazing. It's a great opportunity and it's competitive racing. Felice and Kara did an amazing job in the single and I think they are going to be battling it out at trials," she said. "So these are the top scullers in the country, and to be racing for the national championship and then get rewarded for such a performance is really awesome." 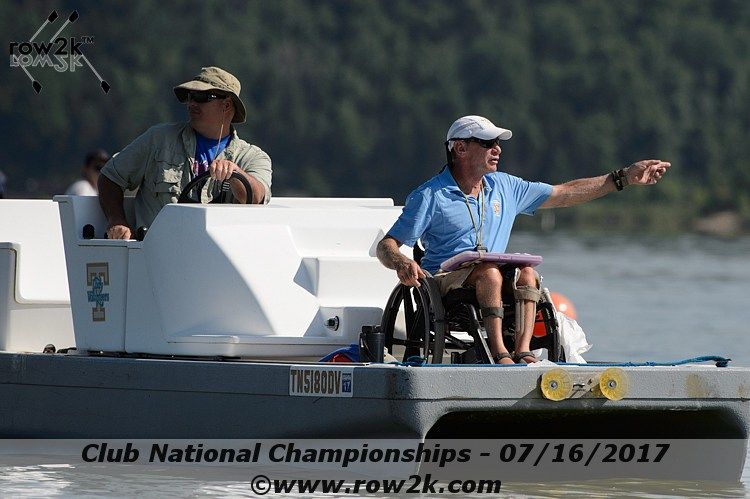 Starting at the 2017 World Rowing Championships in Sarasota, Fla., this fall, all para events will go from one-thousand meters to the full two-thousand meters rowed by all international athletes.

Sunday's racing featured three events that highlighted the longer course, including the legs, trunk and arms four with coxswain. Any athlete who has been attending club nationals this week probably noticed Tim Edsell either in his wheelchair on the referee platform next to the start or following races on the bow of one of the larger wakeless launches - also in his wheelchair.

Edsell, 56, is a former coxswain who rowed at Florida Institute of Technology and has been a referee for the past several years. Born with spina bifida, Edsell has been a paraplegic since he was 21-years-old.

His condition did not stop him from being a coxswain or becoming a referee. Edsell said he isn’t out trying to recruit adaptive referees, and he became one because he loves the sport. But he does consider himself a kind of a "poster boy.

"If others see me out there doing this, they just might think, 'Hey I can do that too,' and learn to become a ref." 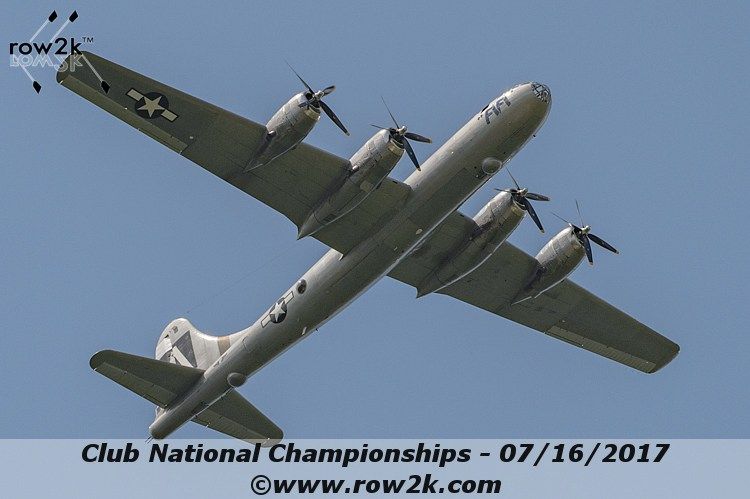 Drones have become a familiar site at regattas just about everywhere these days. They offer an excellent way to photograph events from the without causing wakes in the water. There were two in constant flight during the racing of finals this week, and yesterday they were joined briefly in the sky by an aircraft that helped win the war for the U.S. during World War Two.

A local airfield was playing host to an airshow and a B-29 bomber included in the event made a few turns over the course Saturday and Sunday.

The rules of racing dictate that for a crew to officially finish a race, they only have to cross the line with their boat. It doesn’t matter if the athletes are actually in the boat. So when the elite/senior men's pair from the Minnesota Men's Development Camp of Doug McCune-Zierath and Seth LiaBraaten flipped after hitting a buoy at the line, they swam their boat across and official claimed sixth place in the Sunday final.

They might not have medaled, but the crowd on the beach and the referees following the race appreciated the effort and applauded. 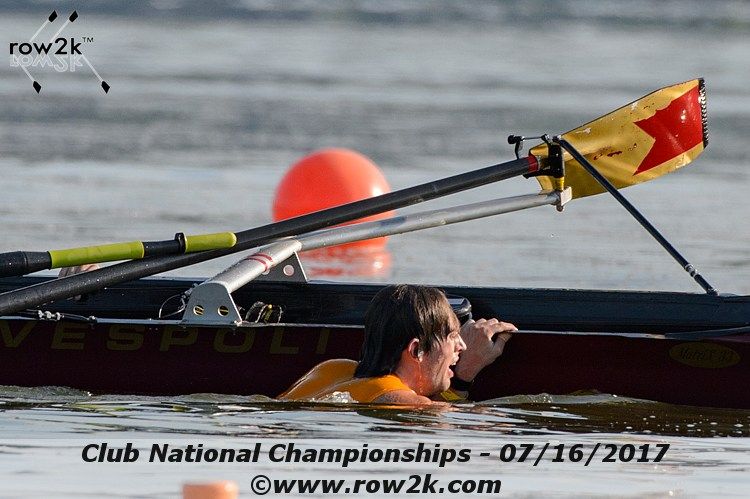 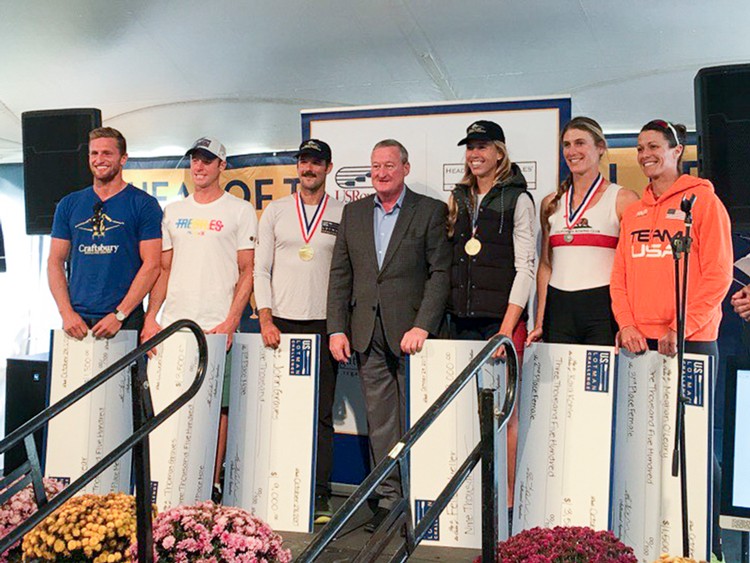 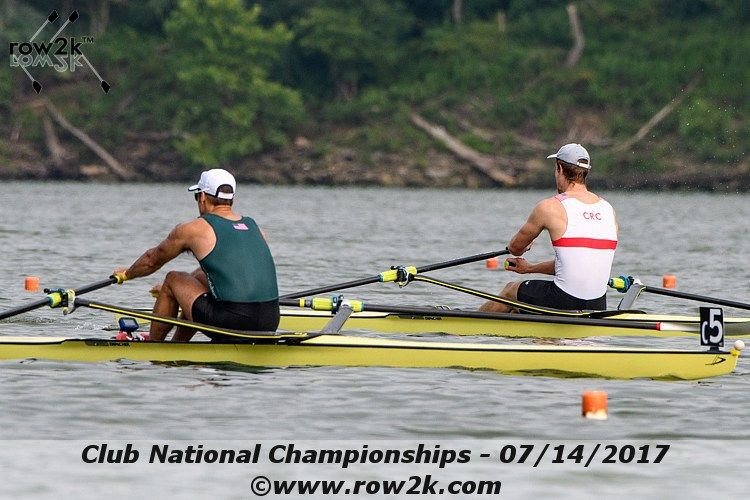 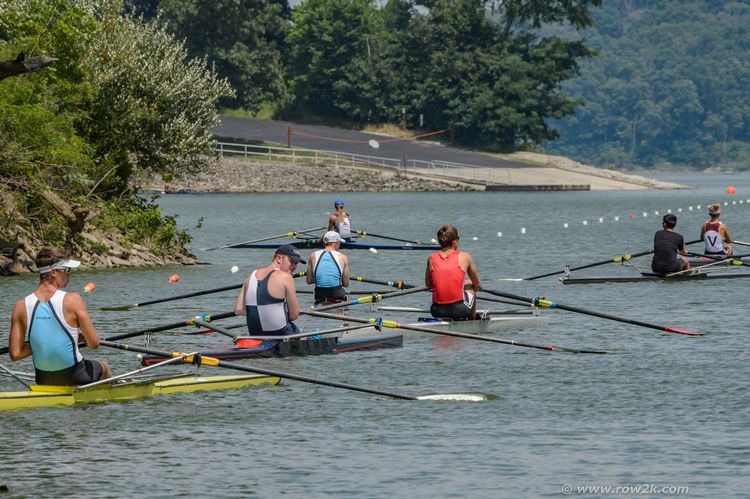 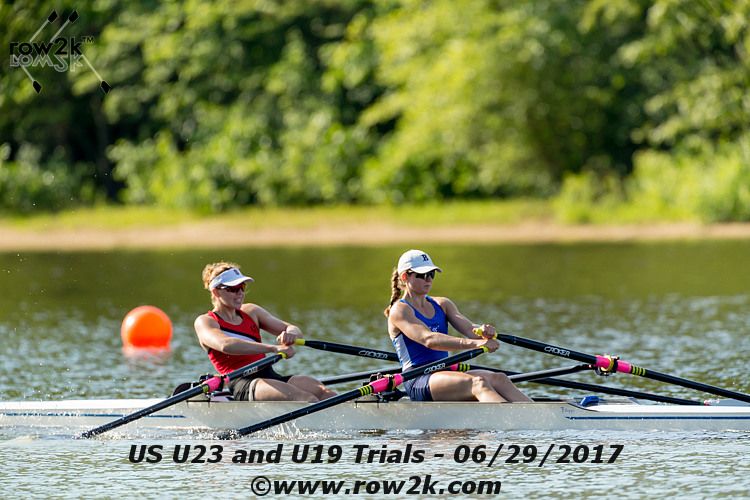