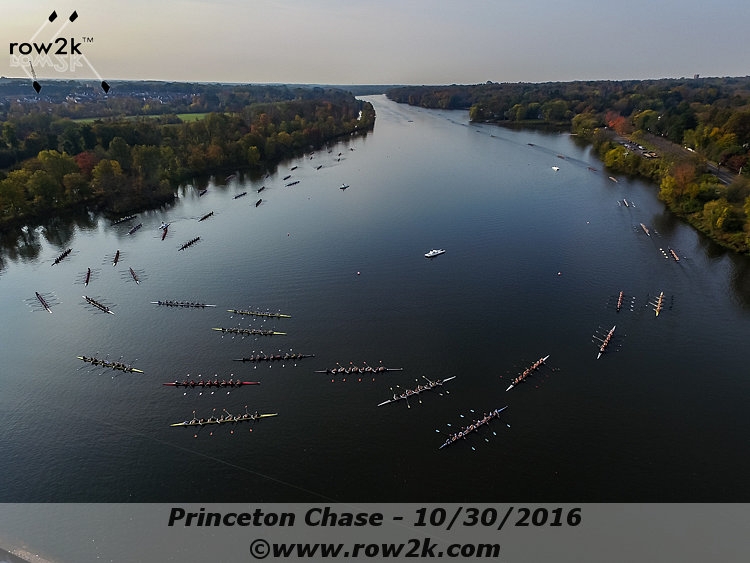 Over the years, many coaches have told row2k they attend the Princeton Chase for a chance to race a course that is light on turns, mostly drama-free, and allows athletes to row a couple times in order to pile up some racing experience in different lineups and boat classes.

After a blustery few weeks of racing around the country, this year's edition of the Chase lived up to expectations, with light winds, flat water, and unisuit temps greeting the featured eights races, resulting in an event light on clashes or disputes and heavy on full pulls.

The crews arrived at the line for the 9am start ready to bring it; as row2k launched a drone over the dam below the course, the race marshall called out "two minutes to start," and the lake exploded with guys yelling and hooting, shaking riggers, pounding gunwales, and revving their mental engines; the full pull was on.

Heavy Men
The Princeton heavies tend to show up strong for their last head race of the year, which is on home waters to boot. With a winning streak reaching back at least five years, was the crew feeling pressure to bring home a win at home?

"There's certainly an added pressure to racing on your own home course, because, of course, you're expected to win," Princeton V8 member Trey Francis said after the race. "You're expected to do very well on your own course; we know it so well and we know exactly where every little marker is on the course, so starting first is definitely really helpful to see another boat behind you. But there's, yeah, huge pressure to win, much more than like at the Charles, where we really don't know what every turn is. Although we studied the course as best we can, we don't know exactly where are, exactly what location we're at.

"This being the culmination of our fall season, we wanted to end the season by putting a mark and having an impressive result," Nick Mead said. "We wanted to do as best as we could in the varsity, the 2V, the 3V, the 4V, and win the fours as well." 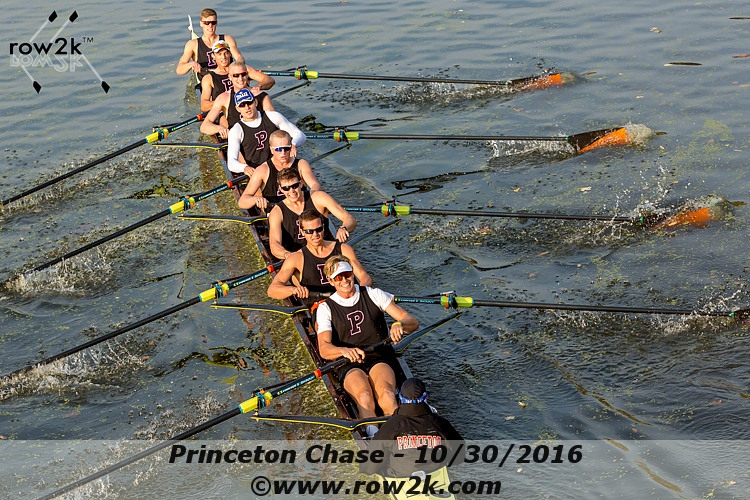 Is there any risk of that familiarity creating a false sense of confidence?

"If there's one thing this does really well, it's race," Francis said. "We practiced in much faster conditions the other day and just went two seconds slower today, so when it is race day, we turn up, really no matter what course we're on."

"I agree with Trey that the team does a good job of mentally preparing for the race," Mead said. "There are definitely nerves there, even though it's our home course. We've raced this racecourse hundreds of times, but there's something extra that comes out from all the guys on race day."

Dartmouth nabbed a strong second place, finishing nine seconds off the Princeton varsity, while the Princeton 2V placed third, another few seconds behind.

The Berkeley crew that placed sixth was their frosh, who turned around and won the Frosh eight three hours later with a time that was only 22 seconds slower despite a building headwind - not a bad turnaround for youngsters.

In the fours, Princeton A won again, followed very closely by George Washington's top four that started right behind them.

It should be noted that the heavy men's ranks at the Chase were a bit down this year, with usual participants Boston University, Columbia, Cornell, Northeastern, and Yale in absentia.

Women
Brown and Virginia have been trading the top two spots at the Chase for the past three years; in 2014 Brown got Virginia by 1.1 seconds, then in 2015 Virginia got Brown by 0.57 seconds; they went 1-2 again this year, but Brown put a bit more definitive stamp on the win this year with a 6.5 second win over Virginia in second, Yale in third, and Princeton in fourth, and a rising Duke program in fifth.

The Brown varsity completes a solid fall season with the win, having won the Head of the Housatonic three weeks ago, placing fourth in the Champ Eight at the Head of the Charles last weekend, and then winning the Chase. Crew members note that, other than the rigors (and rigging) of regatta travel, race day is a lot like any other day on the Seekonk.

"We had a really good race," seven-seat Alia Shafi said. "Yale and UVA are both really fast crews, so we always come out here expecting to see a fight, and I think we executed our race well." 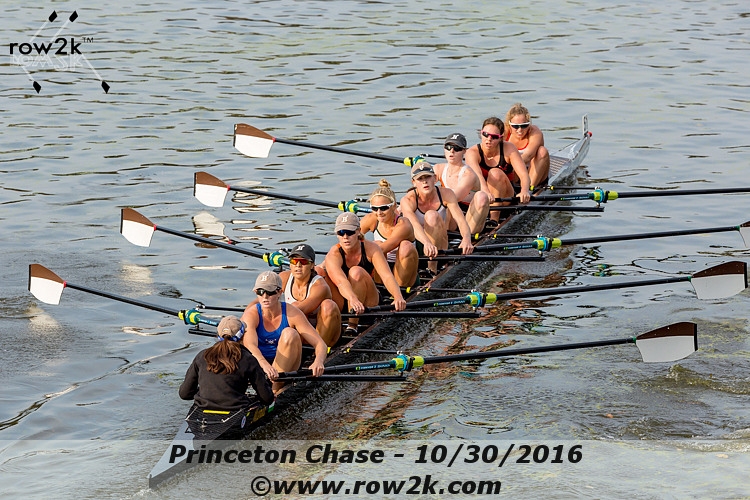 When racing in the front of the pack, crews might never actually be next to another crew, and just have to make guesses based on tiny changes in relative margins over the course. We asked how they approach this challenge.

"It's a lot like sitting on the erg and trying to go your hardest and staying focused," Sobieszek said. "Then I try to think about technical things that I'm doing."

"It's important to keep in the back of your mind that you are racing," Shafi added. "Even if you can't see people around you, you are racing everyone in the race. There's someone that started 20 seconds behind you that's racing that can always be a wild card."

Light Men
Cornell pulled off a three-peat at the Chase this year, followed by Penn moving up from a fifth place finish in 2015, then Yale, Harvard, and Navy. The home team Princeton crews either had some troubles on their home course, or they boated even boats; if it was the latter, it was pretty successful, with 3.6 seconds separating their three crews over the course. Then they almost did it again in the fours, with three crews placing in immediate succession.

The Cornell crew putatively tried to emphasize the early stages of the race, but if you look at the splits, that was just a prelude to a really strong finish, as the crew posted both the fastest first split, as well as the fastest second split – which if you're good at math tells you they won the race moving away.

"Our goal for the race was to improve off our Charles start," crew member Joe Pinnola-Vizza said. "At the Charles, we didn't start too fast, so today we went for a strong first 2k and looked to get away from the other crews and to be on our own a bit through the middle of the race.

"We did a pretty effective job of that, and then it was just keeping our heads in the boat and staying within ourselves and rowing our race." 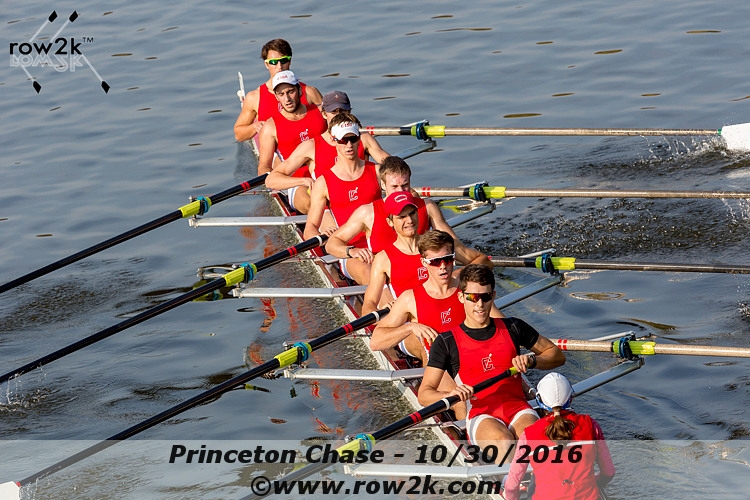 Starting first, the crew could see the tussle between Yale and Princeton behind them.

"We were still being pressed by Princeton and Yale as Yale was passing Princeton, so that kept us on our toes throughout the first half of the race," he said. "Through the second half of the race, we were able to keep pushing away.

"Noticing you are moving away from the crew behind you gives you a sense of confidence, and that helped us. Once we knew that we were walking on the crews behind us, we were able to just calm down and row even better than we had been."

Light Women
The Stanford light women flew east to take a decisive win in the lightweight women's eight category while also taking 11th overall in the women's eight event, ahead of a few A boats from open programs. They were followed by Princeton 14 seconds back, who got themselves ahead of defending Sprints champion Boston by 10 seconds.

The Stanford crew is coming off a national championship year in 2016, but is just getting started for the current year-long campaign.

"Our fall season is a tricky one," said Christine Cavallo of Stanford. "Our first day of school this year was September 26th, which gives us a late start on most of our competition. That makes it a bit of an uphill battle for us, at least mentally. This was our first year attending the Chase, and it was awesome to be in a regatta environment again and racing for the first time this fall. It's a good reminder when it sometimes feels like we're alone out there in the San Francisco Bay--there are actually other teams out there.

"The results were also pretty different from what we saw posted of the Charles, so the field right now looks pretty dynamic." 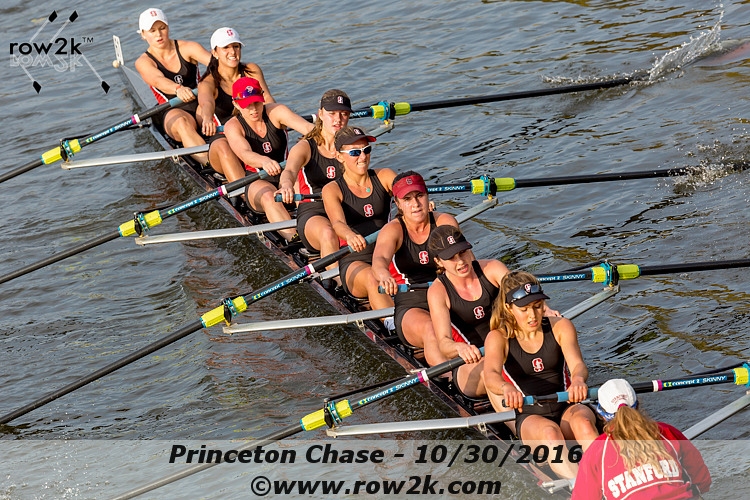 The lightweights raced in a cluster in the midst of the overall women's race, which gave the crews a chance to compare themselves directly to all the women's eights on the water.

"We started in the middle of the lightweight pack so we didn't see many openweight boats on the course, but to have our times placed relative to openweights in the all-encompassing women's 8+ category was very cool," Cavallo said. "Most of our spring season involves racing openweights out west though, because there aren't many times that lightweights get together out there, but it's not every day for us to look at a results sheet and compare ourselves with a lot of these programs."

Fours and More
The fours races are mainly a chance for crews to get some more racing in , but it also allows some programs without heaps of depth to shine, as well as some crews to reverse some results from the morning eights races. We got a little of everything this year, with the GW men taking an impressively close second in the men's heavy fours (as noted above), the Princeton and Duke women going 1-2 in the open women's event, Boston and Princeton going 1-2 in the light women's event to get ahead of Stanford, and Harvard getting themselves the top medal in the light men's four.

In the men's frosh eight, the Cal crew returned from racing the V8 to win the frosh eight by a generous patch of water, followed by Princeton and Dartmouth, and then a heap lightweights chasing them gamely. In the women's novice eight, Princeton took the win followed by Cornell, with the BU lightweights taking third and seventh overall.

Looking Ahead
Save for a few weather-baiting races in the next couple weeks, head racing starts to move south and west from here, with the massive Head of the Hooch getting underway in a few days. Check the row2k calendar for more; we'll continue to see you every 10-20 seconds for the next few weeks.