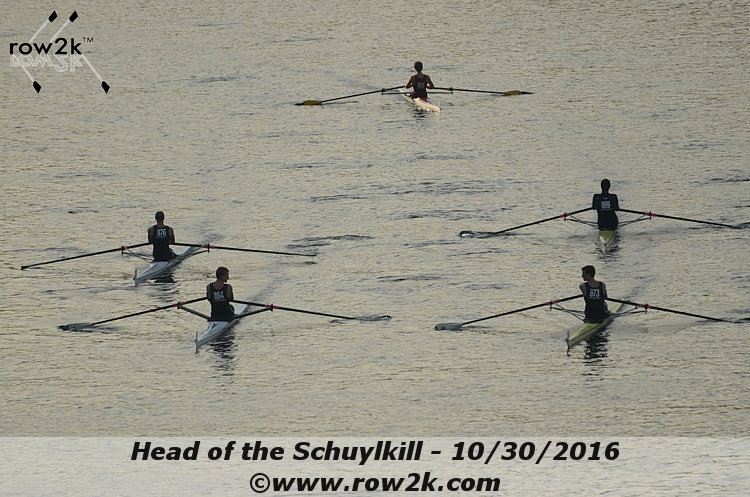 High School singles on the Schuylkill

High school race day at the Head of the Schuylkill Regatta is the autumn equivalent to Stotesbury Cup, bringing Kelly Drive alive with parents, supporters, coaches and athletes. These gatherings are the life-blood of rowing, and what a day for youth rowing it was, bringing shorts weather to an event that sometimes sees snow, or at least cool and blustery winds.

Head races are democratic – an even playing field for all. There is no separation between club and scholastic teams as happens in the spring – which means that to be a winning scholastic team from one high school, the school has to have had one heck of a year. It does happen sometimes, but winning crews with the under-18 set at head races tend to be club teams that pull from several schools.

Certainly this 2016 regatta had some fantastic club teams, and the varsity eights in both genders were an example of how some mega-teams from the Northeast build, train, and win.

On the girl's side, Saugatuck Rowing Club from Westport, Conn. took the varsity eight and four, with the eight winning by 44 seconds, and the four by 27. From there, the junior varsity won by 22 seconds and the freshman won by 34 seconds. It was an impressive sweep from the high school point trophy winners. Gordon Getsinger, who coaches the approximately 58-member girl's squad, attributes the success to the culture at the boathouse. They have two junior national team members, Kelsey and Grace McGinley, who don't mind sharing their knowledge and skill. He said that is also the case with all the varsity leadership. "My coaching staff does a really good job of managing the type-A's, really putting that aside and focusing on supporting what we are doing as a team," says Getsinger.

"It was a strong showing," said Grace McGinley, 5-seat of the eight and a U.S. Junior National Team member. "It was the last race of our season and we really wanted to race fast and win by a good margin."

"We were basing a 34 or 35 for this race, and we have been building that rating throughout the season," said Grace's sister, Kelsey, who stroked the eight. This eight also won the Head of the Charles Regatta and had an undefeated 2016 spring season, capped by the Youth National Championship win. Worth noting on the club versus scholastic topic was local powerhouse Mount St. Joseph's Academy earning silver in the 45-boat girl's varsity field. Mount also earned two medals in the junior varsity eight (1st and 3rd) and had a third junior varsity boat finish seventh.

Not coincidentally, the winners of the Boy's Varsity Eight was RowAmerica Rye, who won by a smaller margin of just one second over Montclair High School, a large public high school in North Jersey.

RowAmericaRye has a leader, like the McGinleys at Saugatuck, in Sean Hayes, who stroked the varsity eight and was a member of the junior national team that raced this summer in Rotterdam.

"He's a great leader, eager to put in the hard work and share his experience, as is 5-seat Augustine Rodriquez, who is also a member of the junior national team, and coxswain Kate O'Brien," said head coach Aleks Rabovic. "Seven out of the eight are seniors, so the JV team is working hard, knowing that they have big shoes to fill," he added. "I wasn't entirely happy with how they rowed, but they showed how much talent is in that boat by winning. I think they can improve technically and shoot for something higher."

RowAmerica Rye is led by Director of Rowing Marko Serafimovski, who is also the girls head coach. The girl's big success was in sculling and winning the varsity and junior varsity quads, which shows what they work on as a club. "For us, it is high volume and discipline that leads to winning," said Serafimovski. " We all do small boat training; all of our rowers get pair and singles training." Another example of the results of that kind of training is 18-year old Leon Chambers winning the Club Single at Head of the Charles. Chambers is heading to University of Sydney in February.

The results of the high school boats during head race season shows a lot of hard work and preparation for the spring put in by these teams. And the high school rowing ranks are growing; most sweep events had more than fifty entries, a testament to the development of the sport at this level. Kudos to the Head of the Schuylkill Regatta for wrangling this high volume day; see you all next year!