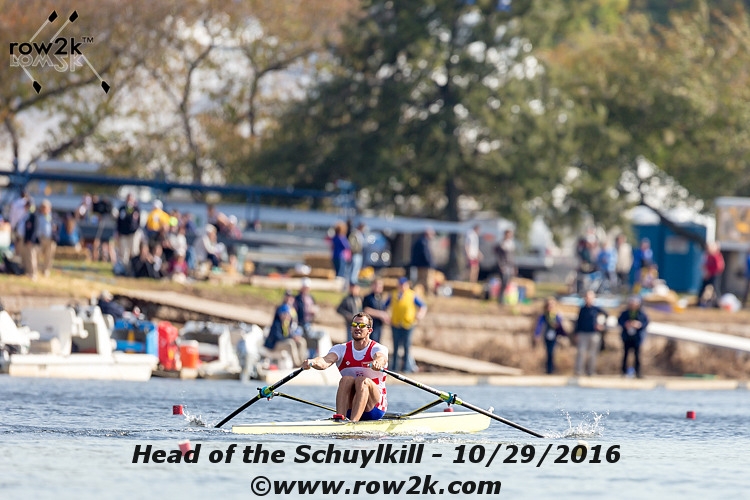 Martin cranking up the rating to check his fitness

Damir Martin said he was out of shape. Before coming to the United States for fall racing, the 2016 Olympic silver medalist was on a self-imposed six-week rest period following his by-a-hair second place finish to New Zealand's Mahe Drysdale in Rio de Janeiro this summer. The time off pushed Martin's "body fat mass" beyond where he likes to be for racing.

At least that's what he claimed. "I was concerned about the shorter distance because I am not in shape," just after winning the Gold Cup Challenge Saturday in Philadelphia's Head of the Schuylkill Regatta.

Not everyone on hand on the special 750-meter course believed him, especially Norway's Kjetil Borch. The Norwegian sculler was hoping for a "three-peat" of the Head of the Schuylkill Regatta's all-star sprint event. Martin gave Borch all he could handle at the previous week's Head of the Charles Regatta, which Borch won and Martin finished third behind Green Racing Project's John Graves.

"The Head of the Charles last week helped me a little to get back in shape." Indeed! Croatian Martin pushed Borch the length of the sprint course, taking his stroke rating up to 44 beats to inch over the finish line and claim the top prize in 2:13.71. Borch finished second in 2:15.72. Fellow Croatian Martin Sinkovic took third in 2:19.04 with Olympic champion Drysdale finishing fourth in 2:25.99.

"He's in shape," Borch quipped after the race.

It was serious racing, but it was also about sharing a fun experience with fellow international competitors following the grueling four-year Olympic cycle that brought closure to the careers of some of the world's most celebrated men's and women's single scullers. "This week has been perfect," Martin said. 'We spent the whole time together and had some fun."

Martin said the week was spent visiting boathouses like the Conshohocken Rowing Center and instructing young rowers, training athletes from other countries and being guests of honor at dinners, including the dinner at the Philadelphia Zoo Saturday night. He said his travels in the U.S. are not normally like this. "This was not normal for me," he said. "We did so many community events and had lots of fun."

In the women's event, it was a "three-peat" as Olympic women's single champion, Australia's Kim Brennan won her third consecutive Gold Cup in 2:32.32. New Zealand's Emma Twigg was second in 2:34.00. Olympic silver medalist Gevvie Stone was third for the second year, clocking in at 2:36.32, and Swiss sculler Jeannine Gemlin finished fourth in 2:36.87.

As in the men's event the racing was serious but the mood was light, and it played out on the awards platform as Twigg, Stone and Gmelin tried to hoist – unsuccessfully – the 6'2 Kim Brennan overhead with her Gold Cup. They settled for holding her, cox-like, waist high. Very funny stuff and they all seemed to be enjoying themselves. And that is why it was hard to extract any race-related details for Brennan.

Brennan really knows how to row a sprint, but Twigg, who had a heartbreaker in the Olympics finishing out of the medals, had something to prove and pressed Brennan hard in the opening 400 meters. Stone, who was one week out from an epic performance at the Head of the Charles, where she won decisively and smashed the course record, looked like she was just hitting her stride as she finished the race in third.

Gmelin looked good, but as Andrew Campbell, Jr. found out last year in his game shot at nabbing the event, it is hard to be smaller in stature and challenge the big boys and girls in a sprint. "Kim is Kim," said Gold Cup board member Bill McNabb, "She is scary-fast," he said.

"It was an interesting one this time because I haven't been training since the Olympics and I was a little nervous because I really didn't know what to expect," said Brennan, who earned gold at the Olympics this summer. Brennan, as with previous years, said she enjoyed the experience of coming to Philadelphia, and what they get to do with the community while training with competitors as teammates.

"It's really unique. You don't get to do this anywhere. We have so much respect for each other. We have so much in common, and really this is a very special event to be a part of," said Brennan, who came down from Boston after winning, with Twigg, in the Women's Championship Double in the Head of the Charles Regatta. "It just took off," she said of that combination. "We are both contemplating retiring, so it was nice to just race in these types of events for the joy of the sport. It reminds you that rowing is about the people."

Bill McNabb, who has been at the helm of the Gold Cup Foundation and the Gold Cup Challenge since its return to the Schuylkill in 2011, has tried to cultivate that experience. "The athletes really want to be here," he said. "After the Olympics, Kim Brennan said on an Australian television interview that she is going to defend the Gold Cup this summer. That is significant.

"I think it's become a pretty big thing in the rowing community and the Head of the Schuylkill is benefitting from it," he said. "The way the HOSR committee allows (the Gold Cup) to be in the middle of this, it's logistically challenging, and we have the corporate boats in there too at the sprint, so it's really great." McNabb's company Vanguard, where he is the CEO/Chairman, had three corporate challenge crews on the water.

"We are really about the sculling, getting the sculling out there," McNabb said. He said the races bring exposure to sculling which could benefit the development of athletes here. "They are a great group of ambassadors for the sport," McNabb said.

The Gold Cup might have been a highlight of the day, but the weekend long Head of the Schuylkill Regatta, "American's Favorite Regatta," or "Philadelphia's Fall Festival of Rowing," (depending on which photo comes up on the website homepage) could very well have lived up to its monikers. The weather was perfect most of the weekend, with only occasional wind and a quick storm that hit late afternoon Sunday after the racing ended.

The HOSR was a sprawling event with almost 2,000 entries – a big year for the regatta. Day one of college and masters rowing was a steady stream – the volume of competitors at 8,000 athletes was impressive. It all went off without a noticeable hiccup; read more from Day Two here.