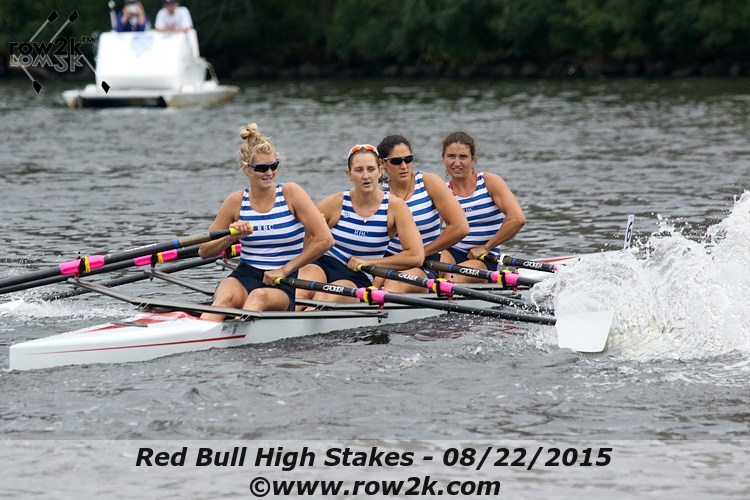 Crews got their stake turns on in Boston.

We've seen the future of rowing, and it is…Fun? Exciting? A Hot Mess? Or All of the Above?

In the case of the Red Bull High Stakes regatta, held at the Riverside Boat Club in Cambridge on August 22nd, the answer is probably "All of the Above." Athletes and organizers experienced a novel and fortuitous combination of racing format, game participants and an appreciative crowd that made Red Bull's first-ever rowing event (and by all rights, that should be "Event" with a capital "E") in the United States a success all around.

Red Bull has done rowing events before (evidence here and here), but this was the first stab rowing that the Austrian energy drink conglomerate has attempted in the US. A brainchild of Red Bull and USA national team athlete, Andrew Campbell and Sean Wolf, Wintech's National Sales Manager, Performance Team Director and RBC member, the event was met with strong interest (entries filled up quickly, and there were no entry fees), and ready props from the athletes who participated.

"I was shocked," said organizer Sean Wolf of the quality of the athletes that participated. "We wanted this to be all-inclusive, where everyone could race, and we had people coming from California!"

The racing format was simple: two teams of 16 athletes, equal numbers men and women, lined up side by side to compete in a single, double, quad and eight, relay-style. Each boat dashed 250 meters downstream, around a stake turn, and back to the start, and then the next crew could start. From the prelims, the four fastest teams (by time) advanced to two semifinals, and from there order of finish determined the winner. 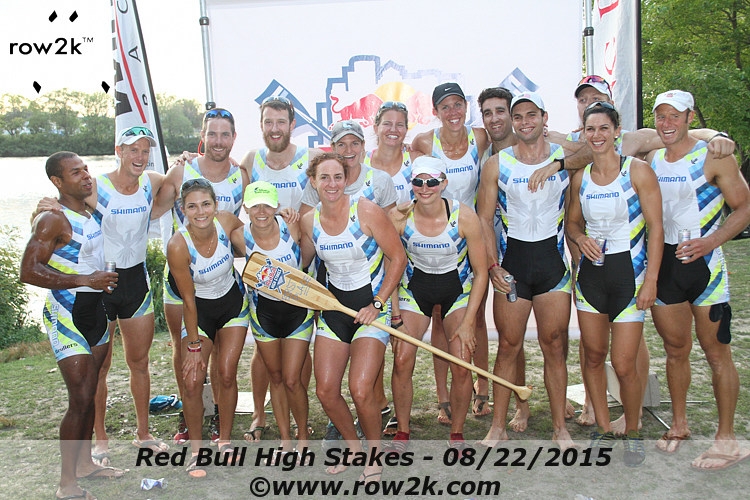 So between the short distances and the turn, the event favored all kinds of fitness; the final winning team from SoCal Scullers had that in spades, with a raft of elite athletes on board, though the entry from Potomac Boat Club, equally stacked, kept it very close throughout.

"That was amazing," said '08 Olympian and PBC rower Sam Stitt. "The sport of rowing is evolving every day, and it's good to see that Red Bull took an interest in it. To see something like this, where a stake turn now becomes part of the race is jazzing it up and making sure we stay exciting. Boston is a great venue for something like this." 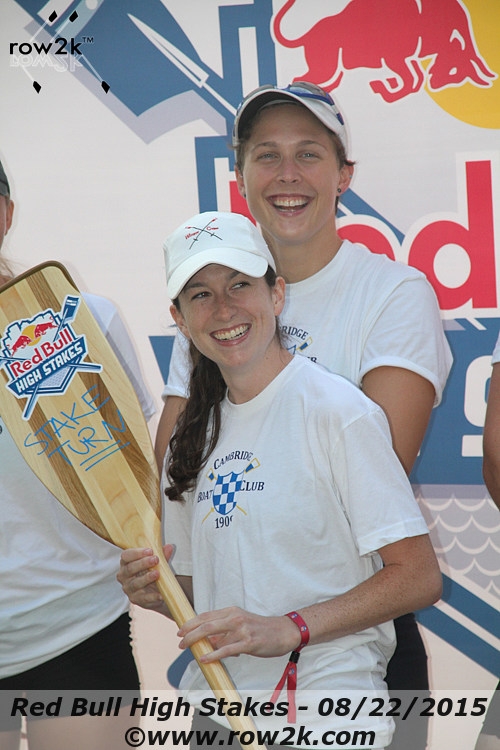 Fittingly, the event rewarded skills in the stake turn (the "High Stakes" of the event name) with its own award for the fastest stake turn in an eight, captured by the Cambridge Boat Club entry. CBC Coxswain Erin Driscoll, was asked how that win compared to her other victories (which include winning the Champ Eights at HOCR) and replied, "this might be better!"

The organizers and sponsors also impressively licked the equipment issues that could have conceivably stalled a "pop-up" event like this; all 11 teams shared two sets of single/double/quad/eight provided by Wintech, and matching oars provided by Croker USA. Less equipment meant fewer trailers and less dock snarls, and worked well enough that one organizer quipped that he could "just put the regatta in a box and take it anywhere." They may be on to something there.

Racing itself was intense and lighthearted all day, accompanied by live play-by-play and a booming soundtrack from the bank…a different regatta experience for sure. A few purists wondered how, in a sport that prides itself on being mostly well put-together on the water, rowing "Events" would work. The stake turn almost means that you have to embrace a certain discombobulation that normally would be out of place in rowing; in Boston though, folks did not seem to mind.

"We talked about rowing races like this for years," said Wolf. "A race where people can just show up and row, they have the equipment, they have a format that's fun and competitive. There is already talk about doing this next year. Our sport needs major sponsors like this, we need big players to come out and say 'This is a perfect marketing opportunity,' and a perfect way to host a fun event that's different."

Red Bull pulled out the stops as far as covering the event from all angles goes—-literally. Red Bull staff were busy all day with photos, hi-def/slo-mo video, GoPros on any boat that would have them, and even had a photographer who did his time getting water-level shots of the action; brave at a regatta anywhere, but definitely so on a red-flag day on the Charles.

Red Bull was evident in other ways as well—beyond the near-ubiquitous availablility of their product on the regatta site (where it was enjoyed in all possible ways), athletes received free shirts, party bracelets and more.

Not everyone was convinced; we came across a group of athletes scouring Wikipedia for Red Bull's ingredients (maybe after having one too many?), and finding that Taurine, a listed ingredient for the drink, "is a major constituent of bile."

So is this regatta a sign of things to come? Judging by the evidence, folks were having a plenty good time on the water and on land (and while row2k did not stay to enjoy the post-race party, the announcers made sure everyone knew where to head and when, whew); given the amount of fit people in rowing looking for something to fill the gap between Canadian Henley and early September, a stake race in Boston in late August might just fit the bill. 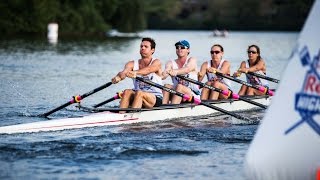 Head-to-Head Rowing Race in the Charles River - Red Bull High Stakes
Boston's Charles River: home to the nation's most dedicated rowers and some of the greatest regatta's, the iconic waters played host to a unique relay rowing ...
back to top
Regatta & Event Coverage Features 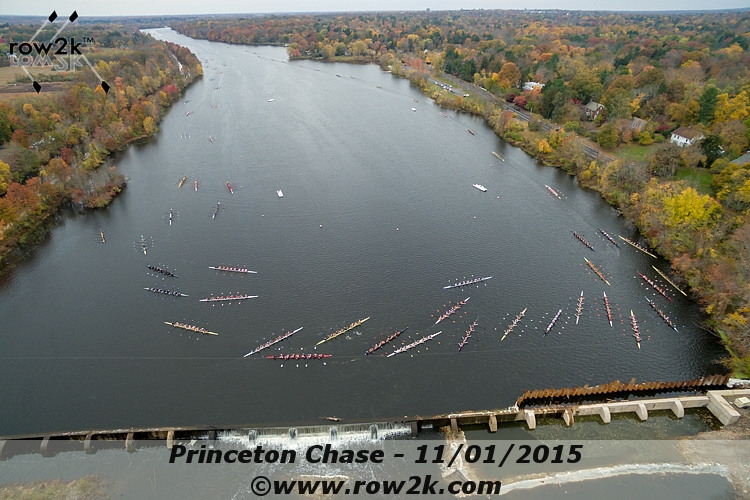 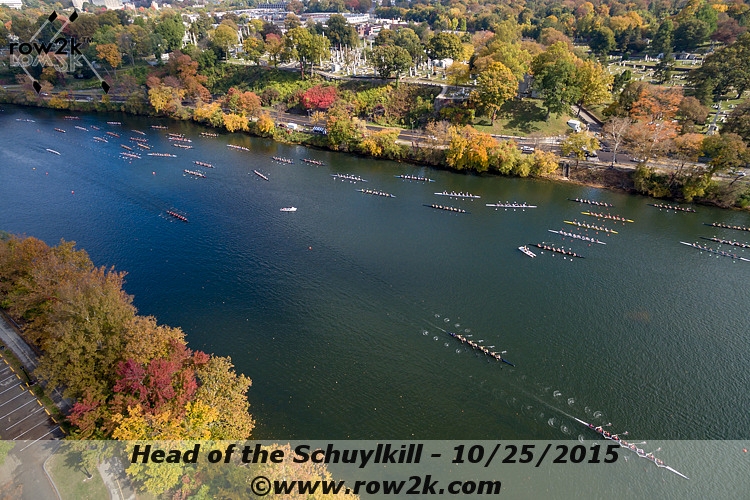 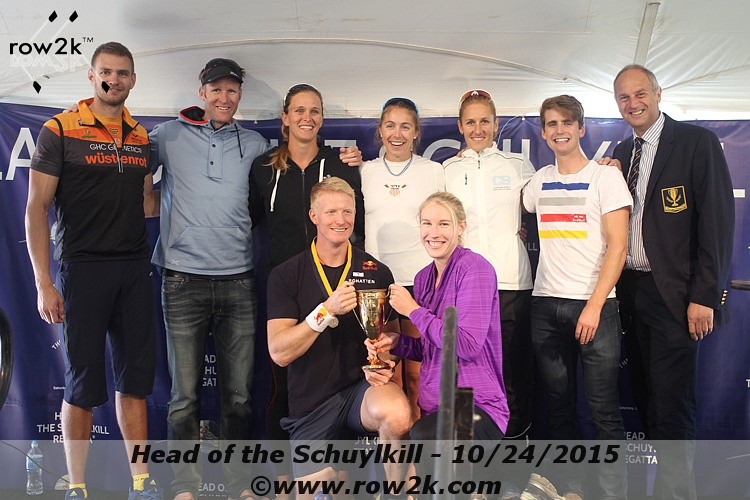 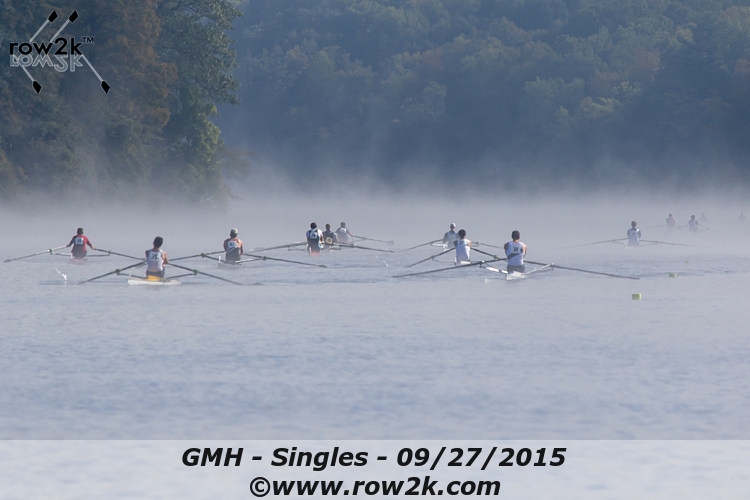