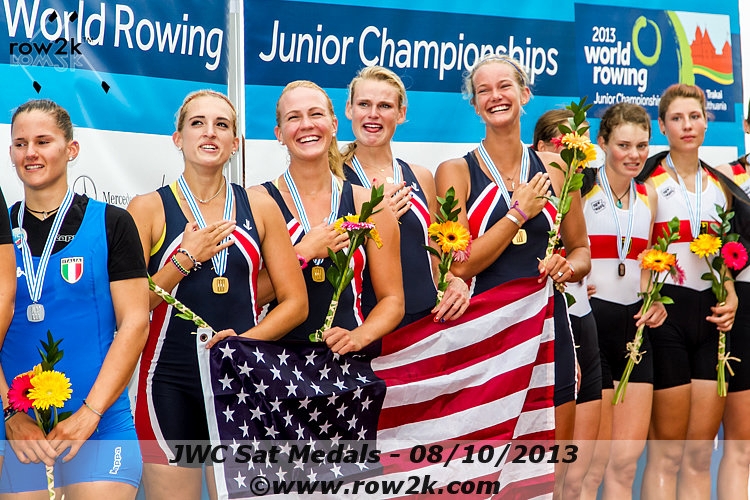 The first day of finals at Jr Worlds presented a mass of dramatic storylines, from prohibitive favorites crumbling seconds before the line to a winning coxswain coming to the medals podium with his head wrapped up like a Revolutionary War soldier. Conditions played a part in some of it – by the time some of the crews reached the finish line in conditions about which one announcer said as he was following through the middle 1000, where you can see numerous sailboats across the lake, "the rule is if it is fun for sailors, it is less fun for rowers."

In truth the conditions were not awful, with a cross head in the early going coming around to a cross tail in the later races, but the combination of somewhat difficult conditions and young rowers can be a volatile one, and it certainly was today on occasion.

The lead story for US fans has to be the return of the US women's four to the middle spot of the medals dock in the first A final of the regatta; that is gold-silver-gold now for the last three years, pretty impressive. This year's crew got off to a slow start at the regatta, and had to elbow their way through the reps to the finals; and then today got off to a slow start in the race, being all but written off by observers in the early going, but punching through into the lead just before 500 to go, and taking off from there. Not that it was easy; the crew was red-lining at the finish line, and had clearly timed their full pull perfectly to be pretty much done in the final strokes.

Before the race, a German photographer made a light-hearted comment about how he "hoped" the first national anthem would be the German anthem; after the race, he said "no, it is okay, there was very good emotion for the photos," commenting on the Americans' smiles, laughs and tears during the ceremony. There is a pro for you.

One of the wildest races of the day came in the light women's quad, where, as predicted, the Romanian crew took the lead early, started rowing away from everyone, and appeared pretty much to leave the fight over the other medals for everyone else in the race.

But with about 10 strokes to go, the Romanians suffered a massive bobble and at least two oars dragging in the water, and nearly stopped completely as water flew around them. The field, which was, as predicted, fighting fiercely over the other medals, blasted past the Romanians, and some of the crews I believe did not even know it had happened.

Why think that? When the Italian quad reached the docks, the three-seat got out of the boat, started hugging and talking to her crew mates, went completely wide-eyed, and collapsed to the dock in tears. It was only on the dock that she discovered the crew had not won silver, but had won the world championship outright.

The US crew was right in the middle of the whole thing, executing a really beautiful and slippery sprint where the momentum on the hull was absolutely obvious, and almost came away with the whole thing, falling short of gold by only a few feet. The crew was staggering on the medals dock, Elizabeth Sharis having had some illness early in the week, and hopefully some of the pictures by friends and family help them remember the whole thing, because from what I saw, it is not a given.

As for the battle-scarred coxswain, when the Italian men's coxed four came over the line, the bowman raised his hands in the air to celebrate, or maybe clipped a buoy, and immediately his oar spiked into the air and went flying, the collar landing behind the bow-loader coxswain's left ear. The coxswain stood up to celebrate in the boat, but the bowman saw what was happening and started calling for help, pulling the coxswain down to him and hugging him. The coxswain, who is 14 years old, insisted on celebrating, and with blood streaming down in sharp lines from his head to his socks, stood up flexing his muscles toward the grandstands.

By the time he was on the medals stand, his head was wrapped up, he certainly enjoyed himself, winking to Italian fans, and then off he went for four quick stitches in the medical tent. Unless he has a concussion, which did not seem to be the case, this is one medals docks experience he will definitely remember.

In a very tough race for the us women's pair, the crew seemed to have a medal in hand when the wheels truly came off with about 15 strokes to go, The whole thing went down such that it wasn't even clear everyone was in the right lane at the end; heartbreaking stuff for the pair.

Notes from the course: The weather really turned today; after two days of hot temps, it was 59 degrees at wakeup this morning. By the end of the day things were toasty enough again, but the relief was welcome.

A large German cheering section was led by a face well-known to US rowers – it was the CRASH-B coach coxswain guy, Boris (Lastname?), whose, well, animated coxing of all of the German CRASH-B attendees is legendary stuff. You can imagine he is a good crowd leader, and they were a great addition to the regatta.

Another US flag was delivered to the dock by row2k photogs; we're into the dozens now I would guess.

Speaking of flags, the left-most "silver medal" flag pole got stuck after the first race of the day, and the Italian flag at the top of the pole could not be pulled down. Luckily, an Italian crew was in the medals for the next race, so organizers just left it up there, and fudged it a little by not having it be the middle flag. Before it could be fixed, the same photographer who had "hoped" for the German anthem noted that "Italy has now won every silver medal all day" – before the next medal ceremony, the staff actually completely unscrewed the pole from the ground, pulled it down, fixed the issue, and reinstalled it. On 15 minute centers, and medal ceremonies that were understandably hard to shut down given the close promixity of the parents and medal-winning kids in this sweetly intimate venue, it was no small feat.

Our hotel internet has been mostly non-existent, so I headed back to the course to upload everything last night after giving it a try, and as I was working on photos, staff were hard at disconnecting wires, taking down signage, turning desks upside down, and more; within about a half hour, it became obvious why they were doing all this; the sky went completely black within about 3-4 minutes time, and I packed all my gear as I anxiously watched the last photos load up, slammed laptop shut and ran back to hotel in 40mph winds, just made it before the drenching.

Thus ended the first day of finals at Jr Worlds; one to go, see you there.