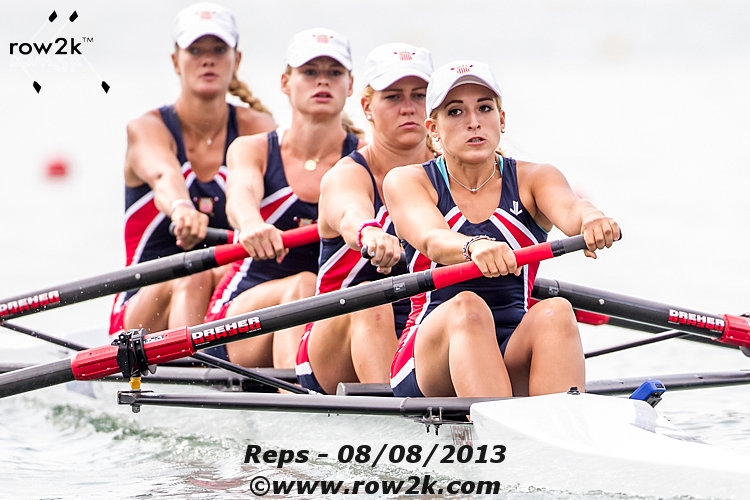 Sunny skies, warm temps and a mostly direct headwind made for some long and hard-fought races on Lake Galves in Trakai, Lithuania on Wednesday; on Thursday, the first crews to launch did so in a light rain, but by late morning it was all sun, heat, and headwind again. row2k was up at the start doing photos, so we don't have much specific information or insight on how all the races unfolded, so we will have to stick to an old standby of heats day coverage – blather.

US crews had an overall very good couple days, with seven crews advancing directly on Wednesday, arguably highlighted by heat wins in both the men's and women's quads, a rare double on European waters for US crews. The men's quad had a particularly harsh winner-only advancements, so did what they had to do and to be one of only four of 24 crews to advance directly to the semis. While not all crews advanced out of the reps, perhaps the one surprise to US fans might be the women's four, who raced the second behind Germany in the far faster of the two heats; fifth place in their heat would have won the other heat.

Seeding at a junior event is also fraught and nearly impossible; with turnover from year to year pretty much the rule given, well, the rules, the fact that a country did well last year in any given event has little bearing the following year. Thus some lopsided times from heat to heat, and throughout the ranks of each race.

Day one was all heats, while Day Two featured the eights heats – I believe it was done this way to allow athletes to double up into the eight – and then a long schedule of reps.

Notes from the course: As can be the case at some European venues, normal life goes on; a well-known example is the swimmers and divers at the starting line in Lucerne, which is a sideshow in itself. Here in Trakai, the boathouse and venue have taken over a somewhat industrial-looking guest house, and there are still folks walking down the halls in bathrobes as racing gets underway each morning. It has a refreshing and normalizing effect for folks who are used to much different vibe at even minor events elsewhere.

The occasion of a major regatta also didn't stop a jet pilot from buzzing the finish line area at the lunch break on Tuesday – wow.

A crew from India experienced race day in perhaps the most heartbreaking fashion on Wednesday – by simply missing their race. The crew showed up about 12-15 minutes late, after their race zipped past them in the warmup area. Oof.

Two races later, a Latvian single sculler showed up two races early, and had to be sent back to the warmup area; wish these folks had split the difference.

This is only a test: on at least two occasions on Wednesday, the umpire following the racing accidentally pushed the 'siren' button on their power megaphone, in each case within the first 100 meters of the race. Thankfully no crews seemed to stop racing, but this is one error you just can't make in an elite race, let alone making the same mistake twice, whew.

Likely inspired by the South African light men's four's use of length straws at the Olympics last year, all the way through the final, a number of crews are using these putative teaching tools on their shells during racing this year. It's never too late to learn (or row the correct length…).

The stroke is like a coach in the boat: the Dutch men's eight stroke was talking to his crew through the coxswain's coxbox while sitting at the line; I hope he was telling a joke or something, yeesh.

The Danish men's eight rowed their heat with no fin this morning; it was obvious there was a problem in the first few strokes, and the crew stopped rowing and raised hands, but the umpire waived them on – and swerving down the course they went.

Temps spiked pretty high midday on Thursday, probably into the mid to upper 80s, and as racing crossed the noon mark, folks started dropping. In the men's quad in particular, two athletes were ragdolled out of the boat in the aftermath of two close races; the athletes are all okay, but it was really lights out at one point.

In addition to the heat and sun, a stiff headwind added to the treachery; as the quads finished up and the singles started coming down the course, it was nearly white-capping mid-course. If you were watching from the finish line, it looked deceptively rowable – but the 10 minute times in a few of the singles events, added to the fact that athletes had hats flying off during the races according to the announcer, and you got a sense of what it was really like out there.

Speaking of the announcer, best line of the day: "one of these scullers is going to assert himself as the alpha gorilla, the silverback if you will…" Hey, even announcers have to have some fun.