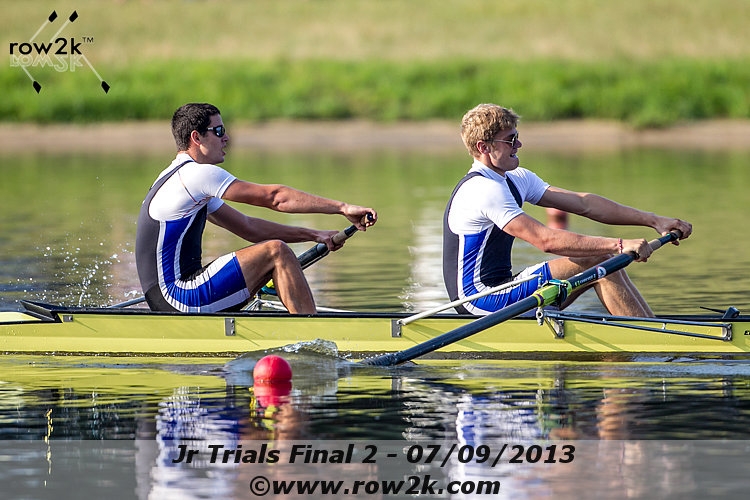 Two days, six boats, and for some athletes, up to four races; these are the Junior World Trials. A time trial for the singles started off the week on Monday morning, with the top four boats qualifying for the finals. On Monday evening the first finals were completed and two racers were cut at that round—a female and male single sculler. This morning, the winner of last night’s race had to win again in order for the finals to be complete—if they didn’t, there would be another round of racing tonight in the best-of-three format. The racing was in fact over this morning, and six boats were named to the 2013 USA Junior World Championship Team who will race in Trakai, Lithuania later this summer.

Kadie Brown and Christine Cavello are no strangers to international competition, and the duo will be heading to Trakai for their second Junior World Championships together in the pair. Though the pair came home with a silver medal last year, the seat racing the past few weeks at selection camp was fierce as ever.

“We tried every line up, making sure it was fair," Cavallo said, "but they trust us together in the pair. The most important part of these selections are developing finesse and learning to row together. You have to almost forget what you cling to so much and go fast together.”

The two approached the trials with more confidence this year, and will surely be more prepared heading overseas. “[Last year] we were going in as the underdogs and we lost to the reigning world champs—the Italians, they are sisters so it was tough competition,” says Brown. “Now there’s a fire under our butts.”

Brown elaborates on how they will work to improve as they aim for the gold. “Our power and strength is there but we really need to work on our blade work and staying calm. We are crazy rowers and go out high.”

The double of Jo Gurman and Hayley Zapolski, who are training with the US development program at GMS in Connecticut, won their races last night and this morning to qualify for Worlds.

“Racing experience has helped for today because I am not used to having a race be over then having to re-race just those people," Gurman said. "So it was hard to come back today and mentally refocus and forget what happened yesterday."

“The hard part for us was making it through trials,” says Zapolski. “Worlds is such an exciting event that whatever you do there is going to be great. We’re passed over the hump and onto the good stuff.”

Two tall, lanky boys, Jim Sincavage and James Mahoney stand side by side, in awe of their win.

“This is exciting—really exciting. I don’t know how to say it but I’m surprised, to be honest, that I’ve gotten this far,” says Mahoney.

“I’m really excited to race the best kids in the world," added Sincavage. “Rowing is all about getting better and pushing yourself; this is what it's all about.”

On being prepared to race up to three times in two days, Mahoney credited stretching. “A lot of stretching, and reading to keep my mind at ease."

The two had a great race, but are looking to improve as they race internationally. “We pulled a good time, 6:44, but we are looking to race 6:30 so we’re going to keep working," says Sincavage. “Make sure we hit our shifts, making sure we push ourselves as hard as we can—it will all come with practice.”

Mahoney added, “I’m just happy to have a wide support group in my family and my coach, I guess that helps during the racing too.”

Joining the women’s pair as two-time Worlds team members, the men’s pair of Justin Murphy and Nate Goodman will be heading overseas for their second Worlds together. The two have been rowing together all throughout high school—their entire rowing careers.

“It’s our third trials, so I think were more relaxed than we have been here before because its something we have done before,” says Murphy. “We have a lot of experience together and that helped. We knew what we had to do, and how to do it. It was just a matter of executing.”

“Yesterday conditions were terrible, but they were better this morning,” said Goodman. ”We were really able to blitz it off the start. We executed our race plan and it went really well.”

“We’ve always had the World Championships on our minds,” added Murphy. “Last year we finished 12th and we decided that it wasn’t good enough. This year is really about improving and making another run for it.”

The two approached later to add a note of thanks to their coach, Jeremy Michalitsianos who has coached them for four years and to whom they credit their success. “He’s been with us through ups and downs,” says Murphy. “He’s the reason we are here.

In her second summer of competitive racing in the single, Christina Johnson of Saugatuck, will be making her first international appearance. “I’m really excited to have the opportunity. The race was intimidating and exciting, but I didn’t really know how I stacked up so it was cool in the first final to see that I had the speed to compete with everyone,” she says. “It’s pretty surreal. It’s not something I even thought would be possible. “

Walter Banfield has a calm steady demeanor. He rows the single exclusively because, “My team is really small, so to do the work I need the single is the option I have. I like it because it's all you—it’s all or nothing.”