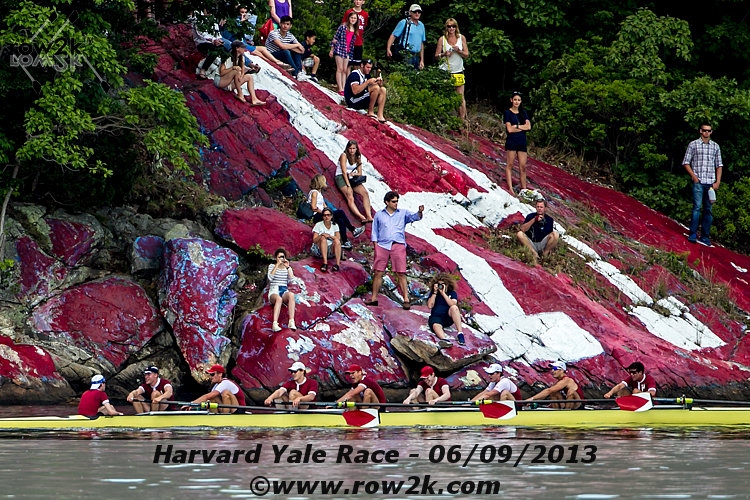 Harvard varsity 8 at The Rock

There is a certain simplicity to the Harvard-Yale race that allows one almost to conjure up an image of the very first regatta 148 years ago. On the open waters of Lake Winnipesaukee, two crews came together to compete in the first intercollegiate sporting event in the United States. The race was competition in its purest form—not a game of strategy, nor one of the mind—this was a contest of sheer physical endurance.

Today, the same two crews looked over at one another on the starting line underneath I-95 as they prepared to duel. The freshman raced a two-mile course, the junior varsity a three-miler and the varsity crews raced an epic four miles on the Thames River in southeast Connecticut. (For all our British readers, our friends in Connecticut like to pronounce the 'th' in Thames.) It was a perfect day, one that could not be imagined by even the most optimistic of forecasters. Calm water on the broad river and not-too-hot sunshine welcomed the two teams as they raced their final competition of the season.

At day's end, Harvard swept the event for the fourth straight year, ending the day with a patient but ultimately dominant performance in the Varsity eight that was driven by strong inspiration both from within the crew, and arguably from the man in the coaching launch a couple hundred meters away.

Saturday Night Combination Crew Race
As is the tradition each year, racing begins on the eve of the regatta proper, when the "Combination crews" race not only for bragging rights, but also for the rights to paint the giant rock 20 strokes before the finish line in the color and letter of their school. Last night's fours race was won by Harvard (results here), and the rock remained red this year – with bits and pieces of evidence of the previous night's work in the few paintbrushes and cans that did not make it back across the river to Harvard's boathouse on the Thames, traditionally called Red Top.

Frosh Commence the Day
On Sunday morning, the regatta commenced with the freshman crews racing the two-mile course. This was the first time that freshman were allowed to race in a non-freshman crew, so coaches were faced with a challenge: to make the frosh boat as strong as possible, while moving some of their best athletes out of the boat into the junior varsity and varsity boats. With only one frosh rowing in the Harvard V8, Harvard got the better of things early in the race when the crew pulled ahead and continued to move open until they won the race by 30 seconds.

JV Crimson Prevails
Between races, the stake boats were reset another mile closer to the Long Island Sound for the three-mile junior varsity race. The length of the Head of the Charles raced just a week after the IRA is nothing short of a challenge for both crews. Though Harvard would prevail, throughout the race, the Yale men remained focused and did not lose contact with their rivals until the end.

"We had a good start," said Harvard junior stroke JP Hogan. "We were up bow-to-stern by the first half mile, and we sat there for most of the time, but once we broke open towards the finish, we controlled the race."

The Yale men finished 6 seconds back, the closest race of the day, but Harvard was determined to continue toward another sweep victory.

Varsity 8 Makes It a Sweep
Though the varsity race is always the most revered at a regatta, at Harvard-Yale this race has extra significance. The longest distance raced, four miles, the varsity symbolizes the initial race between Harvard and Yale in 1852. If the three-mile course is tough, the four-miler is grueling. Senior captain James O'Connor has experience with this race, having been in the varsity crew for three of his four years at Harvard.

"We have been a very fast starting crew this year," said O'Connor, "which is not something we necessarily intended to be — we just happen to be fast off the line. We're light, smaller guys, and it showed at IRAs, where we were winning for a bit at the start (laughs). We didn't have a particularly great one today, but we were still pretty quick, and even our bad starts are quite good."

The Harvard crew took a four-seat lead within the first dozen strokes of the race, and then Yale held the Crimson to closed water for the next several minutes, to the one-mile mark. In recent years, many Harvard crews have made a strong bid for control at the one-mile mark, and this year was no exception, as the crew gained at least another half-length or in 10-15 strokes, and once the Crimson took off, they were untouchable, pounding steadily out to the final 23.7 second margin.

"When Yale was still near us, we could hear their cox whooping and hollering," recounted O'Connor. "David (Fuller), our coxswain, is cool, calm, and collected, and he said 'don't worry about that.' The advantage of being in a long and relaxed rhythm is that you have more gears to use when you need them—today we used another gear a mile in--we dropped the hammer and it was game over."

Though the nine men in the boat will be seen as the winners, there was another man who they raced with today, coach Harry Parker. Admittedly, making calls for him or anyone else are not part of their normal race plan, but the man who has coached 51 Harvard-Yale regattas and as of today has won 44 of those races was the motivator and inspiration for the varsity men.

As many in the rowing community know, Parker has been fighting a fierce battle with his health in recent months, and today the crew called on Parker's name in the boat to spur them on over the grueling four-mile distance. After the close racing of the first mile, O'Connor said the crew was able to rack up their final margin as Fuller stuck to calls for "the right rate, the right rhythm, and the right length - and they were bang on," O'Connor added that Fuller did invoke the name of the legendary – and arguably sui generis- coach.

"One thing that he did mention a couple of times that we have never really mentioned in the past was Harry," O'Connor said. "Generally we are a very internal crew, we race for ourselves; it's nice to have Crimson and H on your shirt, but I'm sure as any rower would say, you only really row for the eight other guys in your boat with you. But today is perhaps the first time we kind of had a tenth man in the boat, and did a few calls to do it for Harry, which in my four years here we never really have. I think we understood the gravity of this event and how much it means to him, and to Harvard, so we felt like it was a pretty important day for him and for ourselves."

As they passed under the rock painted with a still-wet Harvard H, the cheers of the crowds at the rock and at Red Top—Harvard's home away from home - roared above the grumbling motors of the many chase launches. A few more strokes and the Crimson men celebrated.

This race is special for both teams, as they set up home base in Gales Ferry, Connecticut for the week between IRAs and today. In years past, when the races are further apart, the two teams have been known to spend weeks on the Thames practicing for their duel.

O'Connor spoke fondly of the regatta. To him and his teammates it is not simply a season closer, it is the race that gives their program definition.


"This race is historical; it's what the entire Harvard program is built around," he said. "It's the most meaningful race to any of us, I would say. If there is one race you want to win each season, it's this one. Being here (at Red Top) is what makes this race special. Harry, and this place, make this race special for us. You can win every other race of the season, and lose this one and it would be an unsuccessful season. Other way around and it would be a successful season.

"I know it's not really the be-all and end-all, but it's very important for us. It's the original collegiate sporting event in the United States, with so much history behind it, so much alumni support, and it was the first big race that Harry won. It is made meaningful to us by the people who surround us." 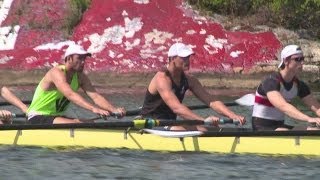